On the Boutique Beat! Hung On You, Pygmalia, Gladrags, Dee Doe, Trend, and The Red Queen┃Intro Magazine (1967)


HUNG ON YOU
430 Kings Road, London S.W. 10
Difficult to notice as the name is written Arabic-style on the door. The shop is filled with simple Arabic clothes too, backed by Arabic music. Michael Rainey, the owner, has clothes made that are straightforward and uncomplicated, and ''not symbolic of the commercial rat race of most clothes today.'' Some of the clothes are made in Morocco, like the robe and headband in the sketch below―they're for boys or girls. ★For being one of the most way out and mysterious boutiques in London.

The ★ accredited to Hung On You by Intro for being one of the most way out and 'mysterious' boutiques in London was very apt indeed. Because it's still quite unusual to come across any photographs or easily found information regarding Hung On You after it had relocated from the reasonably well documented 22 Cale Street shop to 430 Kings Road. Personally speaking I don't recall seeing any photographs of the boutique from this period other than the two photographs below which were featured in Paul Gorman's excellent 'The Look' ― Adventures in Rock & Pop Fashion (Sanctuary Publishing Limited - 2001). 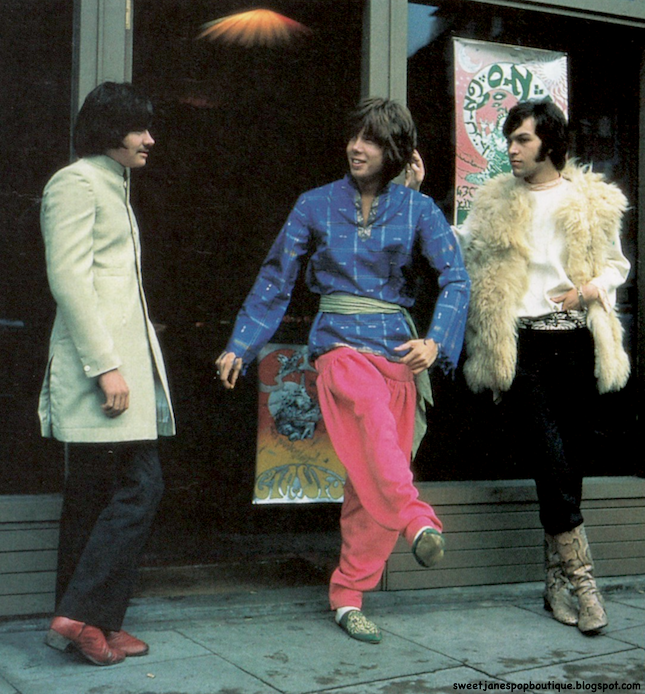 The exterior of Hung On You, at 430 Kings Road, circa Summer 1967. (photographer uncredited). The Hung On You boutique poster on display in the window, and also the one advertising Pink Floyd's gig at UFO on the 28th of July 1967 (just seen behind shop assistant Timothy Allen), were both designed by Hapshash and the Coloured Coat. 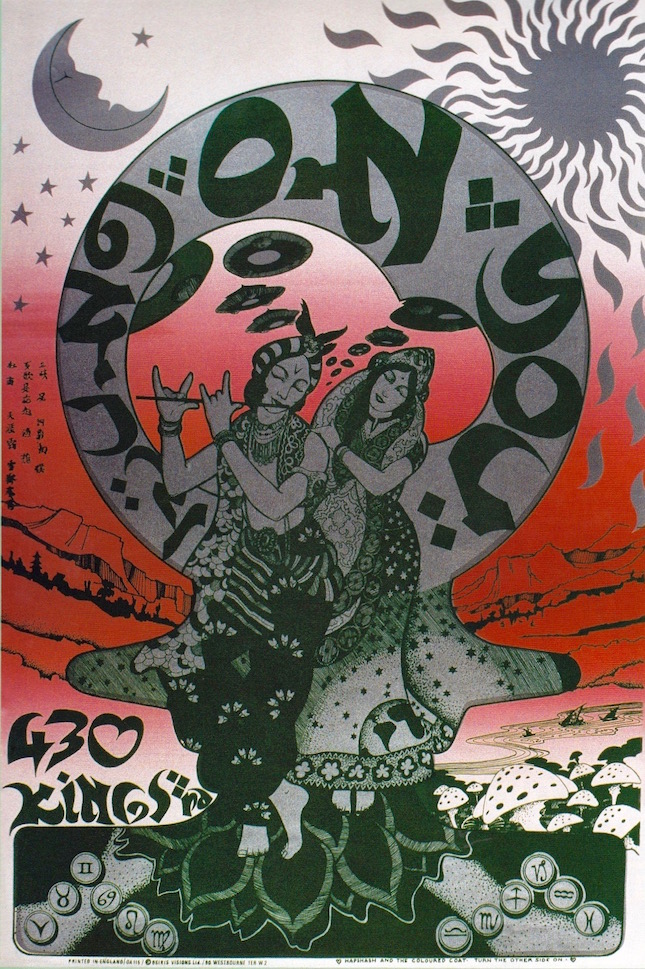 Hung On You 430 Kings Road boutique poster designed by Hapshash and The Coloured Coat. 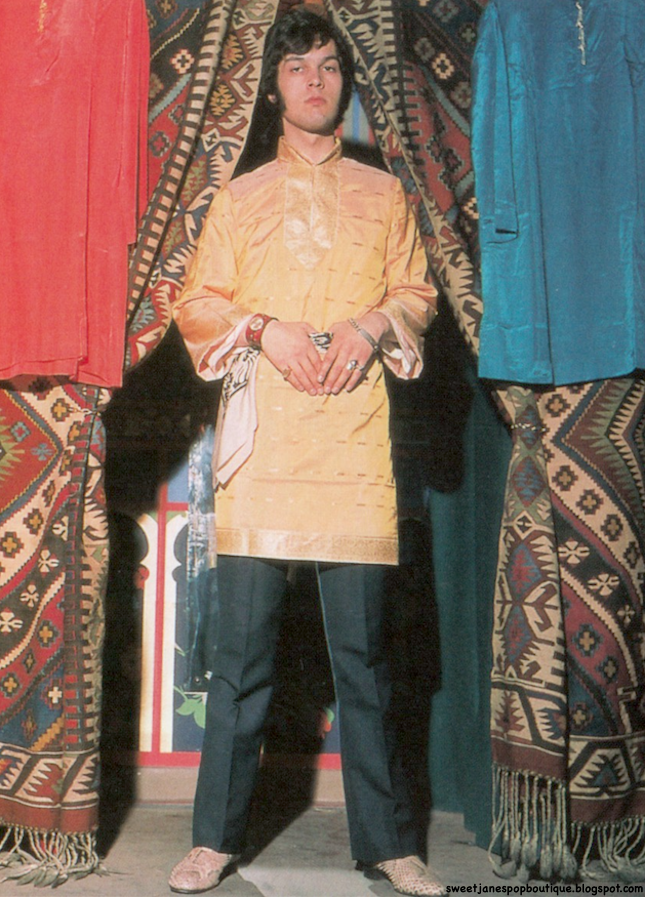 A rare photograph of the interior at Hung On You, 430 Kings Road, 1967, (this is the changing room area). I had a conversation with former employee Timothy Allen a few months ago, and he told me that the custom wallpaper design (just seen) was based on the wall mural in Jean Auguste Dominique Ingres's 'Odalisque, Slave, and Eunuch' (1839), the original painting which was previously known under the title Odalisque with a Slave, is currently held in the Harvard Art/Fogg Museum collection.

An eye-catching frontage with psychedelic paintwork. The interior is on a spilt level with menswear at ground level and the girls' department a few steps up, the interior is in midnight blue, lime green and orange. Pop music booms all day―has done since last April when The Move opened Trend. In the mens department there are flared hipster trousers in tweed from 47s 6d., Regency jackets and coachmen's suits. Hooded corduroy culotte dresses at 89s 11d. are very popular in the girls' shop. Tent-dress styles in light wools from 65s. in camel. burnt orange, bottle green, and lilac are exclusive to Trend. Also clothes by Slimma, McCaul's, Highlight Sports, and Susan Barry. ★ For a good selection that's at everyday prices.

PYGMALIA
3 Backpool Fold, Manchester 2.
Used to belong to The Hollies pop group, now owned by ex-Dakota. A really big shop with two floors―girls up top, menswear down below. Decor is Regency-influenced but not the loud pop music. Most of the stock is specially designed for Pygmalia which has lots of snazzy culotte dresses in brown, black, gold and red. In the men's section they have caftan's in Bush Baby and satin. There are flared trousers more waisted than last year, and frock coats in brocade and velvet. Lots of shirts in new muted colours, dark green, blue and cream. Very popular now, cape-coats in red and black from 8gns. each.★ For a friendly atmosphere and reasonable prices.

Pygmalia, which opened in November 1965, was originally owned by Graham Nash and Tony Hicks of The Hollies, the boutique was run by Nash's first wife Rose Eccles until the couple moved to London. It was then taken over by Tony Mansfield (the drummer from The Dakotas) along with his wife Brenda, and remained open until the 1970s.

GLADRAGS
76 High Street, Croydon, Surrey.
The shop is packed full of beautiful clothes for boys and girls. They have lots of other bits and pieces too., like little Victorian books, and big personality posters. One of the main features of their Autumn stock is the maxi skirt: they have maxi dresses, skirts, capes and coats. Most popular labels: Gerald McCann, Foale and Tuffin, and Veronica Marsh. Lots of separates too. Accessories include bags, tights, belts, hats and jewellery. Note for male readers: the menswear section downstairs specializes in made-to-measure caftans. ★ For a selection unlimited.


DEE DOE
13 Meer Street, Stratford-Upon-Avon, Warwickshire.
A genuine fifteenth-century building with genuine oak beams and a large, chopped off tree on the ground floor. Some of the stock is exclusive to Dee Doe but most of it is Quant, Twiggy, and John Craig. Their specialty for November is long velvet skirts at 5gns., teamed with frilly Victorian-style blouses at 49s 11d. In the male section next door the 1930 Gangster look is strong with dark shirts, bright and gay ties and striped suits.★ For unusual decor and friendly atmosphere.


THE RED QUEEN
78a Liverpool Road, Newcastle-under-Lyme, Stafs.
A very old building-used to be a public house. The walls are now 'marbled', the ceiling red. They have old-fashioned dummies decorating the shop, painting from the local art school liven up the walls. Half the merchandise is their own stock and second-hand fur coats are on sale at £5. Special buy: Sailor trousers which are updated surplus government stock. Plenty of corduroy dresses at £3 19s 6d. and zippy wool dresses at 4 gns. In the boys section, floral shirts at £2 10s., needlecord waistcoats, sailor trousers and cloaks. ★ For a bit of everything.

IMAGE CREDITS & LINKS
All images scanned by Sweet Jane from an original article for Intro Magazine, November 1967. Artist uncredited/unknown. Hung On You exterior and interiors at 430 Kings Road scanned from The Look: Adventures in Rock and Pop Fashion, by Paul Gorman. Hung On You 430 Kings Road boutique poster designed by Hapshash and The Coloured Coat scanned from High Art - a history of the psychedelic poster by Ted Owen and Denise Dickson. Discover more about the British Boutiques of the 1960s and 1970s in some of my previous posts: The British Boutique Boom! (1965); The New Boutiques (1965)―Biba Postal Boutique, Victoria & Albert, Topgear and Harriet; The Carrot On Wheels - David Bailey's Boutique! (1965); View an example of the Art Nouveau window designed by Antony Little for  Michael Rainey's Hung On You boutique at 22 Cale street (1966). An example of A poster and photograph of Hung On You 430 Kings Road, 1967.  Lift Up Your Skirt And Fly, Sheffield (1969). Gear Guide: A hip-pocket Guide to Britain's Swinging Fashion Scene―Who's Who in Carnaby Street & Kings Road etc. (1967); The first Mr Freedom outlet located at 430 King's Road (1969) which previously operated as Michael Rainey's  Hung On You;  Quorum, Biba, Bus Stop and more in The Boutiques Business (1970). Further reading on unisex fashion via Swop Shop―Fashion is for him and her. (1970). See also, Girls are stripping men of their shirts! Well, not bodily, but girls are crowding into men's stores to snap up their snappy shirts―Pinch the shirt off his back! (1968). Read an excerpt from Sex and Unisex: Fashion Feminism, and the Sexual Revolution by Jo B. Paoletti over on Pop Matters. And finally, a film clip of ⚤ shopping at Irvine Sellar's Mates  boutique,  25 Carnaby Street, 1966.