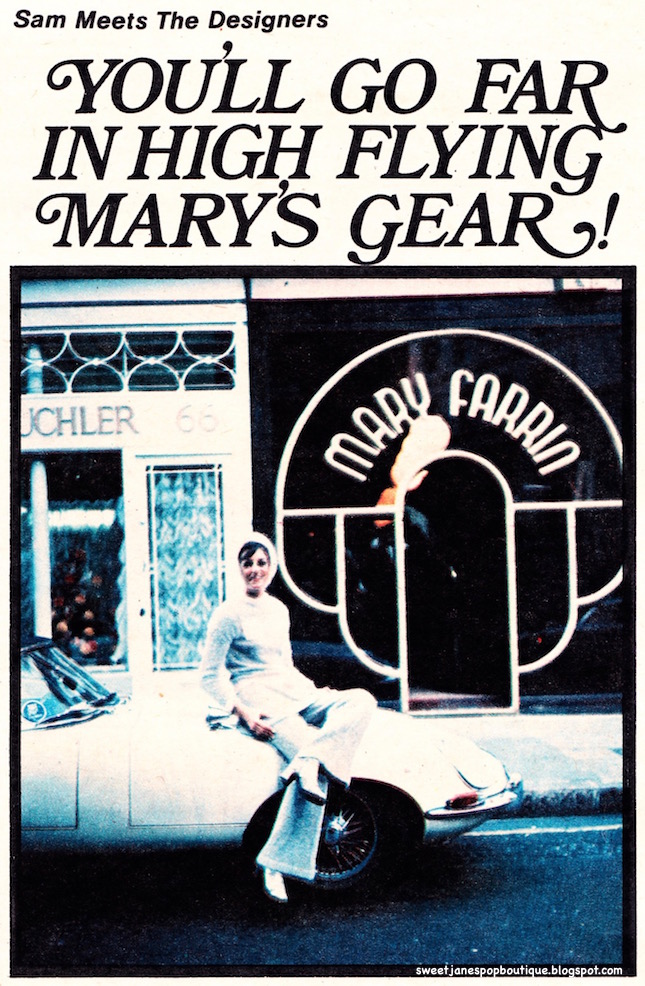 Any of you Jackie girls got a knitting machine? Well you could be in business. 'cause Mary Farrin, queen of the knitwear scene, is always looking for new girls to knit her fantastic gear. ''Any girl under 50, with at least six hours a week to spare can work for me, though most of them are in the Croydon and Sutton areas. ''All the girls are given a week's training. Even if they've never seen a knitting machine before, they can still learn very quickly. ''Then the girls take their machines home and work in their spare time.'' Now you might think knitting is all very well, but you'll never amount to very much doing it. Well, you're wrong! That's just how Mary started out. ''I used to be a demonstrator for a knitting machine firm. But I got bored going around all the little towns, so I started knitting dresses for myself, I wore one while I was demonstrating, and the buyers asked me where I got it. They asked me to make some for them, and it just went on from there. ''I worked at Fenwicks in Oxford Street for a couple of months to learn the business. They ordered the dresses and on Mondays I'd deliver them wearing a new design. ''At first I did everything on my own, then my younger brother, David, became a knitter in the evenings to get extra cash.'' Now David is in charge of the production side of the business and Mary spends her time designing.

Born in Surrey, Mary now lives in a Kensington flat with her husband John Thorne. She works mainly with angora, but everything she sells in her South Molton Street boutique is definitely knitted. ''In any other material, I always feel so restricted. I love wearing knitted clothes―they feel so free.'' At the moment, Mary reckons she has about 100 different designs on the market in 22 colours. ''I add to the collection all the time, with a few more colours every year. ''I have a basic dress, and I just add to it or take away from it. ''I travel quite a lot to get ideas. I've just got back from Malta, which was really great.'' In her spare time, Mary is quite an active person. ''I play tennis and squash, and I watch my husband play hockey. ''I'm also learning to fly! I'd like to get a Comanche aeroplane. But my husband said he'd never come flying with me!'' Proving that her mind is always on fashion, Mary even designed an outfit connected with flying. ''It's a knickerbocker trouser suit, with a black helmet and boots. I just thought it wold be nice to go flying in!''

At present Mary has three boutiques, and 40 shops stock her lines. She exports to quite a few countries, including America, Sweden, Germany and Japan. ''I've just started a children's range of knitted clothes. My ordinary range is designed for anyone from 16 to 60! A lot of boutiques just cater for people up to 24 and then end, but I think that's all wrong.'' And don't think Mary has forgotten about the blokes! ''Joe Brown is going to wear some of my gear. One of my angora tunic dresses could easily pass for a long polo-neck sweater, I think they'd look jolly nice. Men have been wearing cashmere for ages, so why not angora?'' Mary also came to fame when she visited Paris earlier this year. ''Christian Dior wanted to see my collection. He said he would give me an order for a couple of hundred―but my label would be replaced with the Dior brand. ''I insisted that my label stayed on the garments―but Dior thought it was an honour to have his label. ''I said no deal, so they ordered a couple of hundred-anyway, with my label still in place!'' This very talented girl still has three ambitions. I'd like to have my own plane, and a villa, and a boutique in Capri! When I started my ambition was to have an E Type Jaguar. I got that very quickly though―so now i'm wondering what's next.'' (*Note: Christian Dior died in 1957. Marc Bohan was the head designer at Dior when this article went to print in 1970). 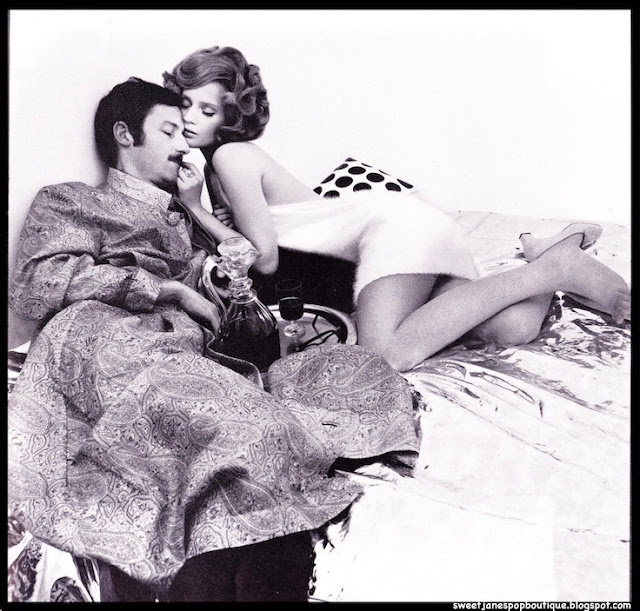 Image Credits & Links
All images scanned by Sweet Jane from (1). an original article for Jackie Magazine, February 7th, 1970. Photographer uncredited. (2.) The Mary Farrin angora backless dress example was scanned from Queen Magazine, November, 1967, the photograph is by John Stember, and you can view the entire editorial in my original post Clothes to be in Love in (1967); see more Hit Knits by Mary Farrin in Vogue, September (1967); plus a soft angora dress in beige, with bands of white and brown at the hem and on a cute top pocket by Mary Farrin via A day in the Life of a Rave girl ― Rave Magazine (1968). Further information about those Comanche aeroplanes as mentioned in the Jackie Magazine interview above, and also some examples of the knickerbocker trouser suits which were popular in 1970. You'll find a dream of a dress in a flare of ice cream colours by Mary Farrin, amongst this John Stephen of Carnaby Street post. View some vintage Mary Farrin knitwear examples. And finally, Whatever Happened to Mary Farrin? She was incredibly successful, particularly throughout the 1960s and 1970s, so these are the decades in which you'll find the most related press and publicity articles about the label. However, although I think the business was still active in the 1980s―the trail runs out around this time, and I believe that the company may have gone into liquidation circa 1990.
Posted by SWEET JANE at 12:42 No comments: Links to this post

Baby Doll Colours from the Rainbow at Woolworth's┃Rave Magazine (1968)


COLOURS FROM THE RAINBOW
AT WOOLWORTH'S

Posted by SWEET JANE at 15:47 No comments: Links to this post