Would you let your own daughter undergo The Jimi Hendrix Experience? (1967) 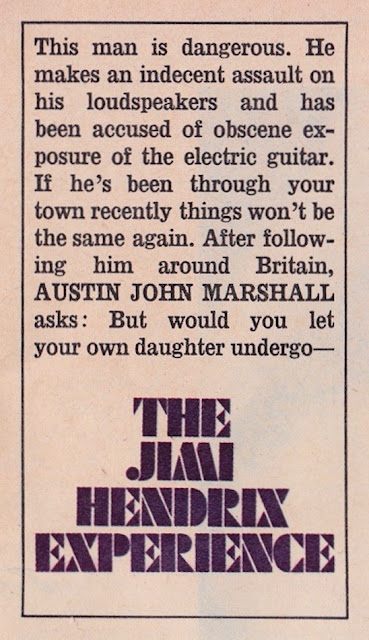 It was only a year ago, between the end of military gear and the start of Flower Power, that Jimi Hendrix, a completely unknown 22-year-old coloured American guitarist and singer, came to Britain. This autumn he topped the Melody Maker poll as the No.1 musician, and his group ''The Jimi Hendrix Experience'' goes out for £700-£1000 a night. All his records have been tremendous chart successes, but it is in his live appearances that he has made his mark. He burnt a guitar at the Monterey Pop Festival in June, the Daughters of the American Revolution complained that he was too sexy; he treats his guitar like sex-organs and his loudspeakers like lovers. On stage, dwarfing the three group members, are 12 giant cabinets containing 48 loudspeakers, each one of which can fill the Albert Hall with sound. The effect is rather like having the Albert Hall fall in on top of you. Hendrix and his group affect fuzzed-out hairstyles and a giddy variety of brocaded, multicoloured clothes on stage and off. But in spite of the noise, and a riotous, balletic stage act, he is a talented and even significant artist. For James Marshall Hendrix, like any other coloured American, and a generation of teenagers in the Western world, grew up with the violent, vivid tradition of the blues, the urban folk music of the West: and his playing and singing are closer to the blues than any artist of comparable popularity. In his fine, smoky voice can be heard an echo of one of the great hero-figures of the Negro blues, McKinley Morganfield, who is better known as Muddy Waters.


For Hendrix, with his hair, the lucky charms hanging round his neck, and the devilish, overt sexuality, can be seen as an embodiment of Muddy's most famous song, the solemn, voodoo-tinged hymn of male potency 'Hootchie Cootchie Man'. Blues of this temper were popularised in Britain by the Rolling Stones, who took their name from another Muddy Waters song, 'Rolling Stone Blues'. But the twitching Mick Jagger can't conjure up the power that is Jimi's birthright. Jimi Hendrix is our very own Hootchie Cootchie Man, our noble savage, a hero riding in a fine frenzy high over the fairytale meanderings of Britain's psychedelic kids, who love him for his pretty clothes. The hard, tough lads who know dig him too. When Jimi first played at a club in London's West End, a young connoisseur turned to Paul McCartney, 'Look, I know blues mate - you need a guitarist like that in your band.'


Hendrix was born in Seattle on the Pacific Coast in 1945. His father is a landscape gardener. In the honey-beige, wildcat face there is Red Indian from his pure Cherokee grandmother, whom he saw much of when his parents marriage broke up. 'I used to spend summer vacations on her reservation in Colorado, and the kids at school would laugh when I wore shawls and poncho things she made. But on the whole my school was pretty relaxed. We had Chinese, Japanese, Puerto Ricans, Filipinos - we won all the football games! I wanted to be an actor or a painter. I particularly liked to paint scenes on other planets. ''Summer afternoon on Venus'' and stuff like that. The idea of space travel excited me more than anything.' He has a child-like fascination with outer-space. One of his compositions is about visitors to earth from another planet: O strange beautiful grass of green, With your majestic silken scenes, Your mysterious mountains I wish to see closer, May I land my kinky machine? After landing from a three month tour of the United States, Hendrix and his group strolled casually through London Airport Immigration like other-world birds of paradise....Hendrix, tolerant, relaxed good humoured with the customs officials as they impound his portable stereo equipment, fingers his silk and velvet clothes. The entourage - drummer Mitch, bassist Noel, road manager Gerry Stickles, the assistant known simply as 'H', and promotion man Tony Garland - glide smoothly and efficiently past autograph hunters and into the hired Rolls. The chauffeur is apologetic...''The firm couldn't send the new one, sir, as last time it came back with ''I Love You'' scratched on the paintwork with a nail file.' It is all as normal as could be, all part of the gig. Three streams most usually taken by ambitious coloured boys in the United States are: the armed forces, sport - and music. Explaining this, Jimi's hands flutter, making freaky little science-fiction scenes, harps, waterfalls. 'After school I joined the Army Airborne, and got to Spec 4 - that's what you would call a corporal - but I got injured on a jump and hung up on the discipline. I was on the road for a while hitch-hiking with my discharge pay and a guitar. I got to New York. A big rock 'n' roll tour manager saw me playing in a vaudeville act and I started out to play backing guitar to all the big name combos.'  Jimi's Career for three years reads like the sleeve-note for an Identikit rebel, for every guitar-picker in every poor dusty town really hopes that his guitar will buy him a Cadillac and deep-freeze. But the way up the professional ladder for a Negro musician is tough. For Jimi, the discipline of playing on one-night stands behind the great names of the 'Solid Gold Soul' (where you could be fined five bucks for missing a step in the routine) was worse than the army.

One of the big names he played with was the ordained preacher-rocker, Little Richard: 'He wouldn't let me wear the frilly shirts on stage, just these shiny silk suits. He said, ''I'm the only one allowed to be pretty.'' ' This conformity in dress, plus the endless repeated phrases in the music and the mechanical climaxes of commercial Negro bands, couldn't hold a young man with ideas of his own. Jimi kept missing the tour bus, checking out of motels, leaving songs he'd written behind in lieu of payment. Eventually, in August last year, he hitched back to New York. He was having a bad time in a small club in Greenwich Village when Chas Chandler, an English pop star in New York, heard him and saw how he might take to the British pop scene and it to him. Today Chas, long, sleek, and boyish, is at 28 a confident, expansive Geordie tycoon, happy with life.  'I saw Jimi as the governor rebel of all time. I mean he may be nice as ninepence as a bloke, mind, but here was the guy who was going to turn on all the chicks, crucify every blues guitarist in the world. 'He wanted to use a wider idiom than blues, and was being drawn towards Bob Dylan-type fantasy, so we could give him the chance to write his own songs, which he has done with great success. I went into partnership with my own manager Mike Jeffrey to manage Jimi. We spent £5000 before Jimi did a single gig, including wages for Jimi's group. For the group had to be the best possible, both temperamentally and musically.'


They got drummer John 'Mitch' Mitchell from Georgie Fame's outfit, and Noel Redding for bass, who together with the electric hardware make up the Jimi Hendrix Experience. Mitch, is small, alert, quick, an Ealing lad, who has been a child actor, with fond parents who sent him to the Corona Stage School ... 'I saw all my friends becoming faggots because it was the done thing. I thought - ''There must be something else.'' ' He had his twenty-first birthday in Miami Beach after playing the Hollywood Bowl at the climax of last summer's US tour. His parents in Bordars Walk, Ealing, had a cake made for him on his return in an exact full-size replica of a snare-drum with sticks. Mitch gestures  like Jimmy Cagney with 10 spread fingers, dead serious. 'I find so many British musicians go to the States determined to be inferior - I mean no one, no one scares me.' On stage his drumming matches Hendrix's pyrotechnics with perfect confidence. He wants to plough back his money into musical experiments, working with jazzmen, but couldn't resist buying a yellow Lotus Elan. Noel the bassist is slight, with a stringy frame, relaxed and laconic. He has a soft, handsome, bookworm's face, with steel rimmed National Health specs and a wooly buzz of hair more spectacular than Hendrix's. 'Mitch perms: mine's natural.'  Noel is a straight rock 'n' roller up from Folkestone: 21 years old, a hundred and fifty quid a gig, all the birds he can get and doesn't give a sod. He is a Red Barrel-and-gin man with long experience in groups. 'I've seen it all, been on the road for four years. I get very lonely but I don't show it. What I really like is making love to a girl and seeing her straight after standing there while I'm playing. I'm saving up to buy a nightclub in Spain. I see soldiers there sometimes looking at me, laughing. I just think to myself ''Who's the fool?'' ' Noel has the kind of steady temperament to stand up playing like an anchor, keeping the foundations solid while Jimi and Mitch are skyrocketing into the fourth dimension. Hendrix has three guitars on stage (he has smashed 13). Two are white and sculptural, and one is like a bizarre painted arrow. He has opened up the expressive range of blues. His playing sounds like about a thousand miles of thin steel sheet in the sky being ripped apart...Sounds like a posse of 500cc Rockers playing chicken in a tunnel...sounds like all the sawmills and goods yards in the world...Jimi rides it all like a child on the big dipper. A composition of his is called 'Stars that Play with Laughing Sam's Dice'. On one level it's all about a trip on a space rocket called 'Butterfly Rollerskate' and it all flies apart as it passes Mars 'somewhere on your left': Jimi himself can be heard shouting delightedly 'I hope you're all enjoying the ride - I know I am'.

All images scanned by Sweet Jane from an original article by record producer, graphic artist, painter, lyricist, poet, manager and film-maker Austin John Marshall for the Observer Magazine, 3rd December, 1967. Jimi Hendrix photographs © Terence Donovan and Bruce Fleming respectively. Jimi Hendrix lyric © 1967 A. Schroeder Music Publishing Co. Ltd. Discover more about the photographer Terence Donovan and view his portfolio of work via the Terence Donovan Archive. Visit the Bruce Fleming Photography Website here. An interview with Bruce Fleming: On Jimi Hendrix, the 1960s and the Art of Photography and you can also listen to a podcast about the time that he spent Christmas with Jimi Hendrix. A great piece on Jimi Hendrix's arrival in London in September 1966. More on the Jimi Hendrix influence from this period in one of my previous posts, and view Jimi wearing a shirt by the label Sam Pig in Love created by Paul Reeves, a new line of clothing available from Kleptomania Boutique in 1967. Discover more about this particular clothing label over on The Look: Adventures in Rock and Pop Fashion. And finally, pay a visit to Jimi's London flat on the upper floors of 23 Brook Street.