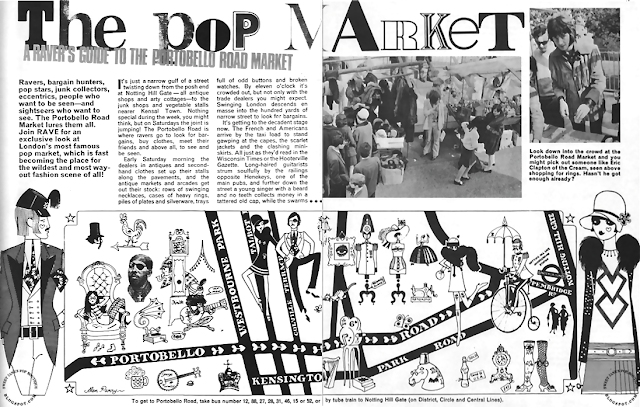 It's just a narrow gulf of a street twisting down from the posh end at Notting Hill Gate - all antique shops and arty cottages - to the junk shops and vegetable stalls nearer Kensal Town. Nothing special during the week, you might think, but on Saturdays the joint is jumping! The Portobello Road is where ravers go to look for bargains, buy clothes, meet their friends and above all, to see and be seen. Early Saturday morning the dealers in antique clothes set up their stalls along the pavements, and the antique markets and arcades get out their stock: rows of swinging necklaces, cases of heavy rings, piles of plates and silverware, trays full of odd buttons and broken watches. By eleven o'clock it's crowded out, but not only with the trade dealers you might expect. Swinging London descends en masse into the hundred yards of narrow street to look for bargains.

It's getting to the decadent stage now. The French and Americans arrive by the taxi load to stand gawping at the capes, the scarlet jackets and the clashing mini-skirts. All just as they'd read in the Wisconsin Times or the Hooterville Gazette. Long-haired guitarists strum soulfully by the railings opposite Henekeys, one of the main pubs, and further down the street a young singer with a beard and no teeth collects money in a tattered old cap, while the swarms of photographers, who outnumber everyone else, shoot everyone that moves. Among the movers you might see Mick Jagger and Chrissie Shrimpton, or it might be John Lennon and Cynthia, or maybe The Who. There are very few pop stars who haven't bought stuff from the market.

''I Was Lord Kitchener's Valet'', purveyors of military and original Victorian gear, sells all manner of frills, furs and laces. Roger Daltrey of The Who bought some sailors white bell-bottoms there. Gary Farr of the T-Bones walked out with several American Navy tee shirts. Charlie Watts has bought jackets there and so have Ray Davies, Mick Jagger and John Lennon. But it is Eric Clapton of the Cream who is regarded as the real trend-setter, perhaps because he spends most time there. Fur coats go for five pounds down the Market. And jacket and capes go for two pounds or even thirty shillings. Long Victorian dresses vary in price from about a pound to three pounds. But in all cases, you'll get what you want cheaper if you bargain for it, and that applies especially to clothes more than jewellery. Rings and necklaces are more expensive, because their value doesn't decrease with age. Nevertheless, it's still cheaper than average, and probably the best selection of Victorian jewellery in London.

But the wildest gear is on the people; yellow coat and pink tie, silver stockings and swirling green cloak. So if you fancy joining in before it dies the unnatural death of all ''in'' places, here are a few facts about where to go, how to get there and what to look for....
FRIDAY. The junk market. A lot of real rubbish..odd china, old books and kitchen sinks. But some real finds in the way of pictures, records and the odd antique, if you have the patience to look. All day at Kensal Rise end.
SATURDAY. The antique market. Lovely antique rings and stones. Lots of period clothes, mainly nineteenth and early twentieth century, at any price from ten shillings to five pounds. Starts early morning and goes on until early evening. 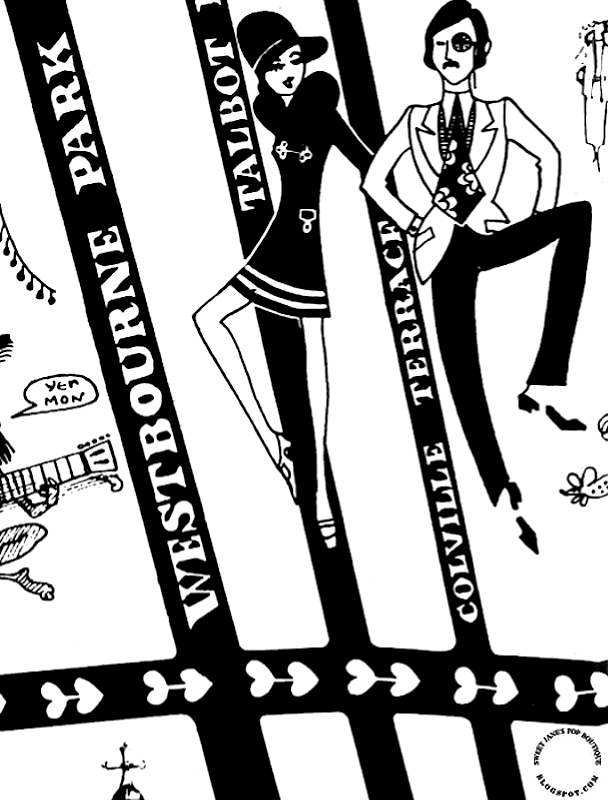 Detail from the illustrated map of Portobello Road by Alan Parry which accompanies the feature, be sure to click on the first image at the top of the page to view a close-up of the entire map. 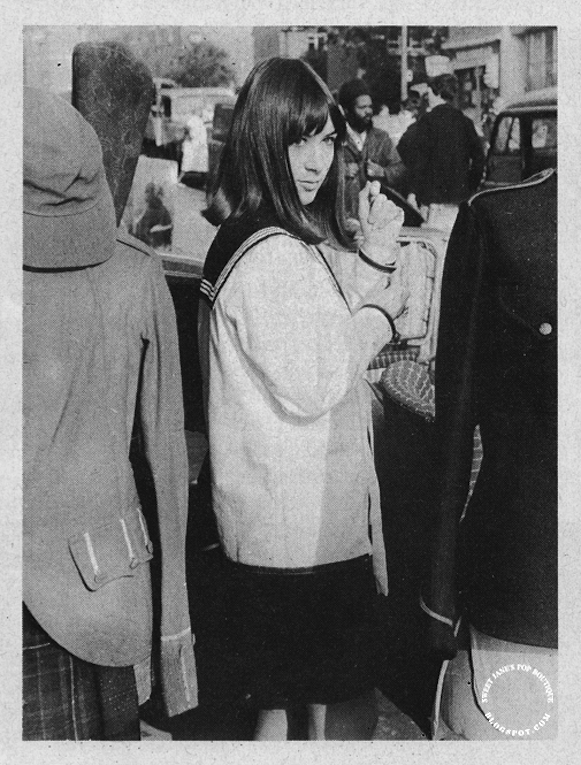 Sailor jacket from I Was Lord Kitchener's Valet.

Posted by SWEET JANE at 10:09 3 comments: Links to this post 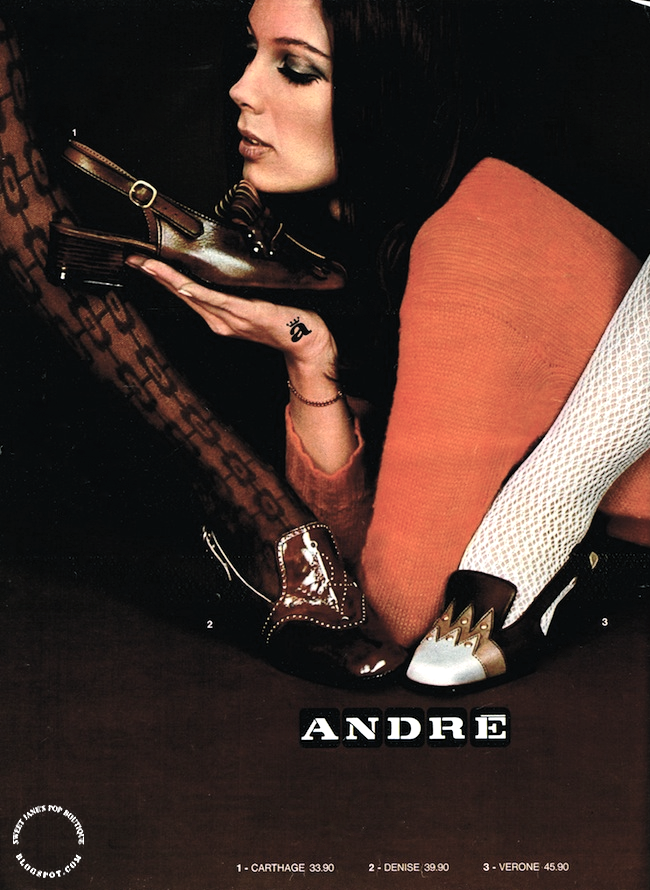 IMAGE CREDIT & LINKS
Image scanned for the Sweet Jane blog from Jours de France, 23 March, 1968 with thanks to Brad Jones. Photographer uncredited. Discover more about the heritage of the Andre shoe company which was established by Albert Levy in 1900 here.

Posted by SWEET JANE at 09:43 No comments: Links to this post

A & B GIRL
Fashions and records...they've both got two sides. Here's the A side of fashion, flip the page and there's the B side...and Twelve steps To Loveliness. Be an A & B Girl! 'A' SIDE...A party-best dress for Halloween - or any other night of the year - in white net, dolled up with red velvet ribbon under the bustline, and long layered, see-through, sleeves. By Susan Small £12 1s 6d. The white satin little girl-look shoes are by Loftus, £2 19s 6d. and the ritzy bracelet comes from a range at Fenwicks of Bond Street, £1 5s. 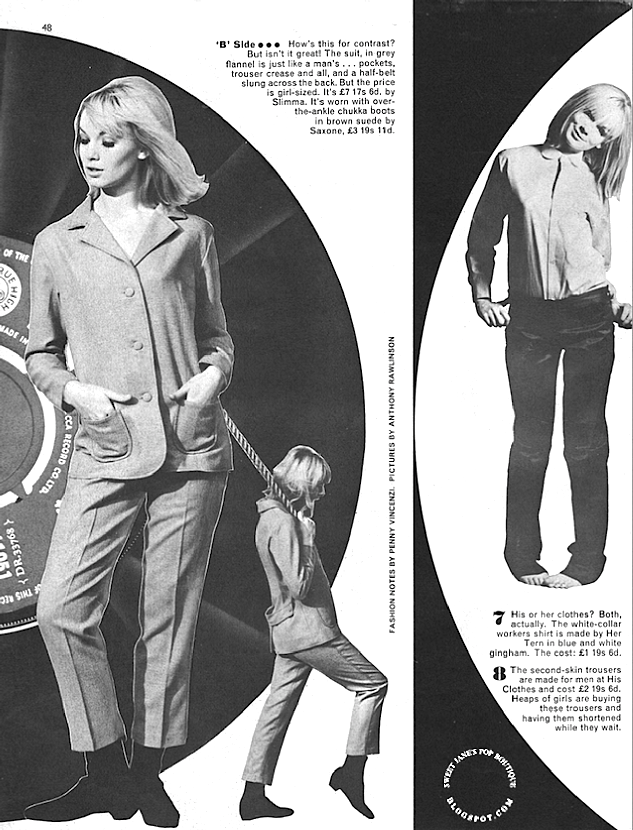 'B' SIDE...How's this for contrast? But isn't it great! The suit, in grey flannel is just like a man's, pockets, trouser crease and all, and a half-belt across the back. But the price is girl-sized. It's £7 17s 6d. by Slimma. It's worn with over-the-ankle Chukka boots in brown suede by Saxone, £3 19s 11d. Right; 7 & 8 respectively His or her clothes? Both actually. The white-collar workers shirt is made by Her Tern in blue and white gingham. The cost £1 19s 6d. The second-skin trousers are made for men at His Clothes and cost £2 19s 6d. Heeps of girls are buying these trousers and having them shortened while they wait. 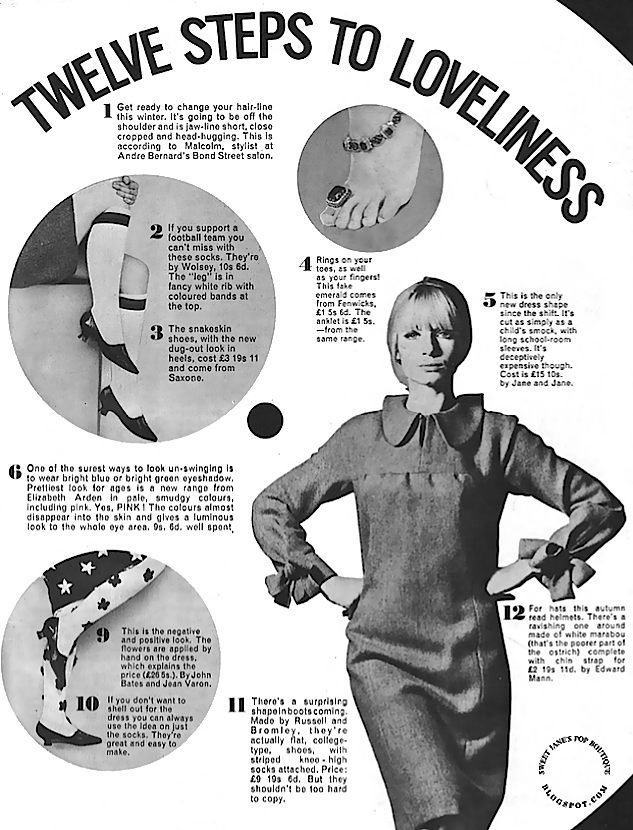 5 This is the only new dress shape since the shift. It's cut as simply as a child's smock, with long school-room sleeves. It's deceptively expensive though. Cost is £15 10s by Jane and Jane. 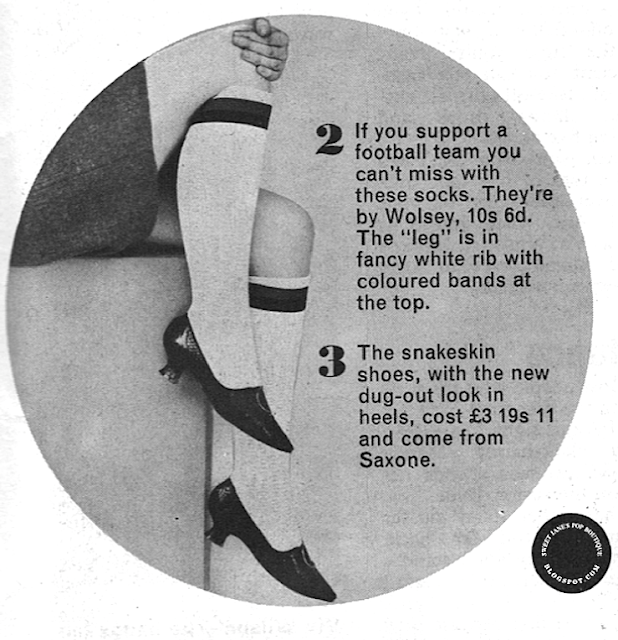 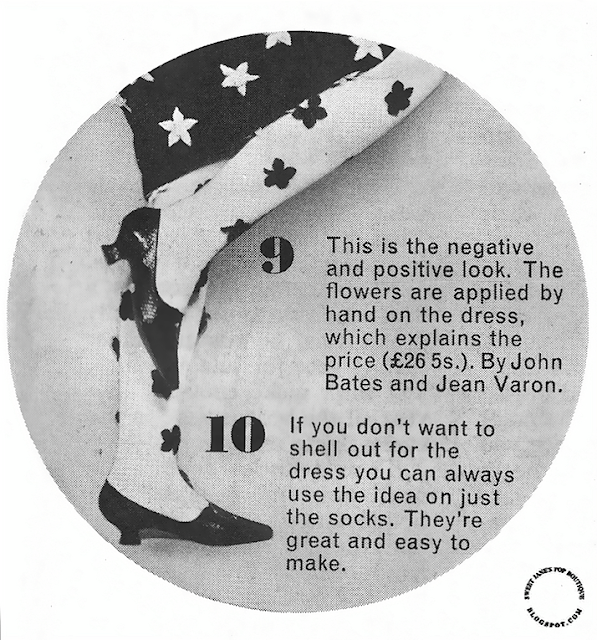 Posted by SWEET JANE at 13:12 No comments: Links to this post 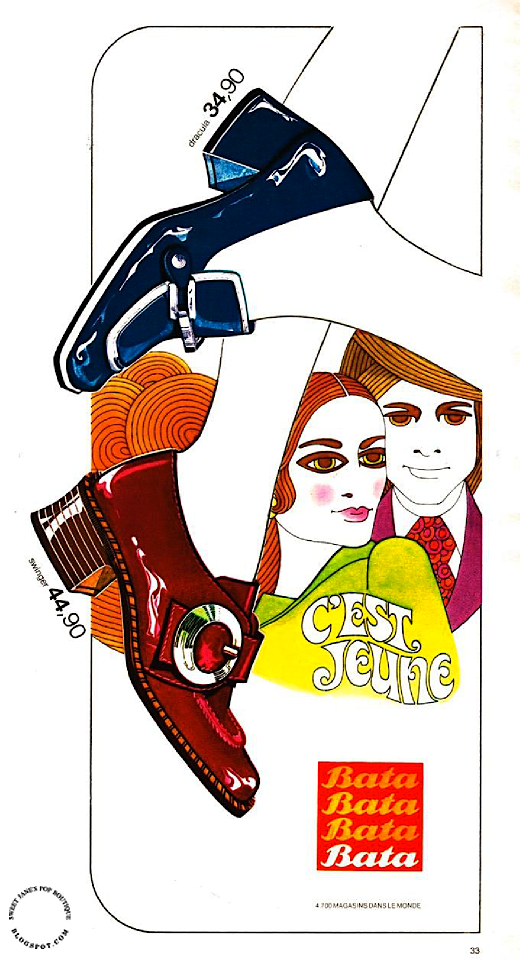 IMAGE CREDIT & LINKS
Image scanned for the Sweet Jane blog from Elle Collections, 2nd March 1970, with thanks to Brad Jones. Artist uncredited. Discover the history behind the brand and much more on the excellent Bata Reminiscence and Resource Centre website. Visit the Bata Shoe Museum here or view the Bata Museum's online exhibitions and read an interview with Sonja Bata, founder of the Museum.
Posted by SWEET JANE at 09:35 No comments: Links to this post