The Carrot On Wheels

I've been curious to know more about The Carrot On Wheels ever since it first came to my attention a few years ago via Get Dressed, Millicent Bultitude's 1966 pocket-guide to London's boutiques⎯which gives an excellent but concise description of the shop, as you can see for yourself in the first image scan below. However, although I've regularly searched, nothing else of note has ever really shown up, apart from a few photographs of clothing items included in fashion editorials from the 1960s or the occasional reference to the actual name itself, usually to be found listed alongside various other 'quirky' boutique names of the era. But in general, nothing noteworthy...until now that is! I just happened to glance through my copy of Felicity Green's recently published Sex, Sense And Nonsense⎯which chronicles her time as Fashion Editor at The Daily Mirror in the 1960s, and this time I noticed a snippet of information at the end of an interview with David Bailey that I had somehow previously overlooked.

As it turns out, he was the original owner! He opened the shop in partnership with model Pat Knight in 1965, precisely one week after the Daily Mirror article went to print and also had plans to open an Antique shop the following spring. I have no idea how long the partnership prevailed, as the piece in Get Dressed refers to a Gitta Brewer as the owner a year later, so perhaps his involvement was short lived. Either way, it makes perfect sense that he would have a clothes shop at some point, it would seem that it was the thing to do back then after all, to quote the well known journalist Clement Freud (speaking in 1967) ''One feels almost a fool if one doesn't own a boutique.'' It's not a lot of new information but it is a good start in the right direction! So for now, I'm just going to post what I have and hopefully add to it at a later stage as more comes to light. I'm hoping to eventually find a photograph of the facade and the interior...because I find it hard to believe that Bailey opened a boutique without there being some kind of press/publicity coverage, it's got to be out there somewhere! 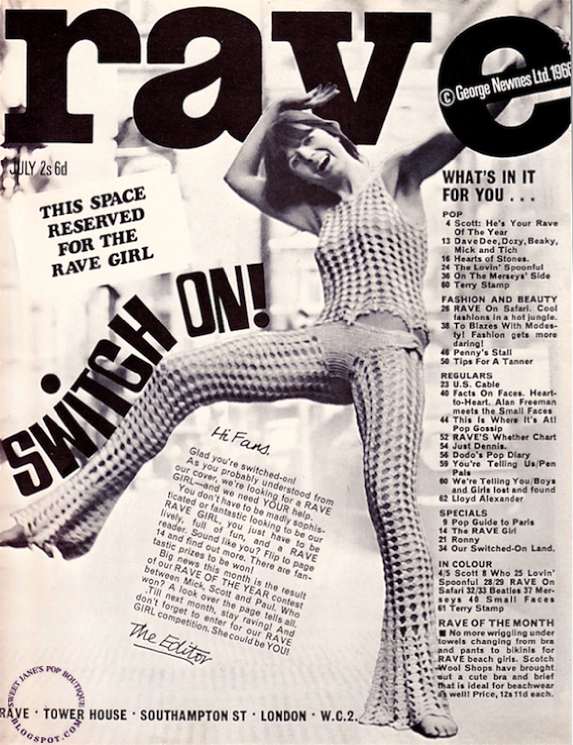 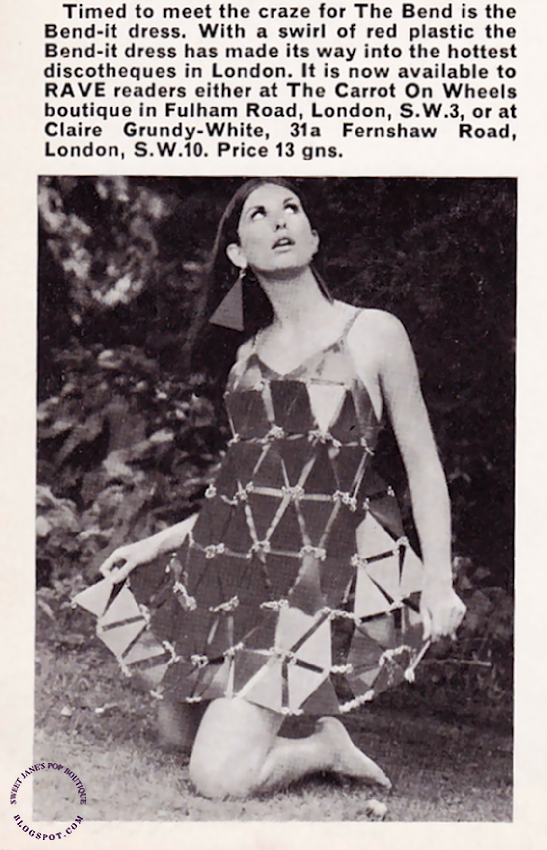 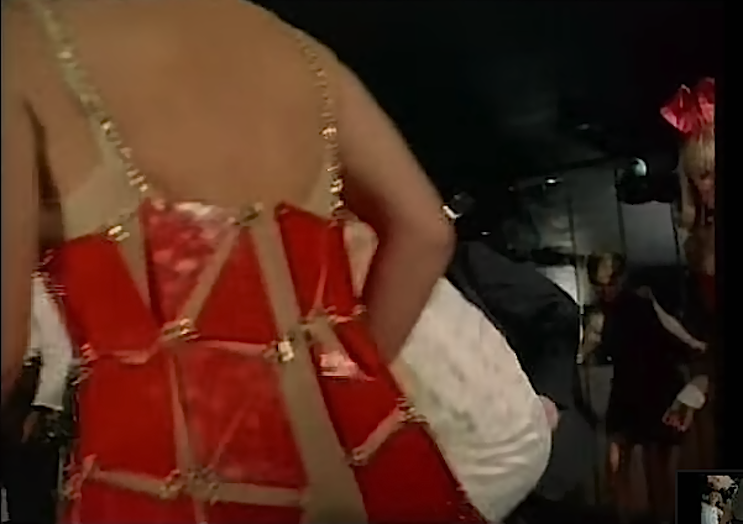 Above: some colour screenshots of the red plastic mini dress as seen in a promotional film for 'Bend It' (Gilbert & George's favourite tune) filmed at The Playboy Club in Park Lane, November 1966. 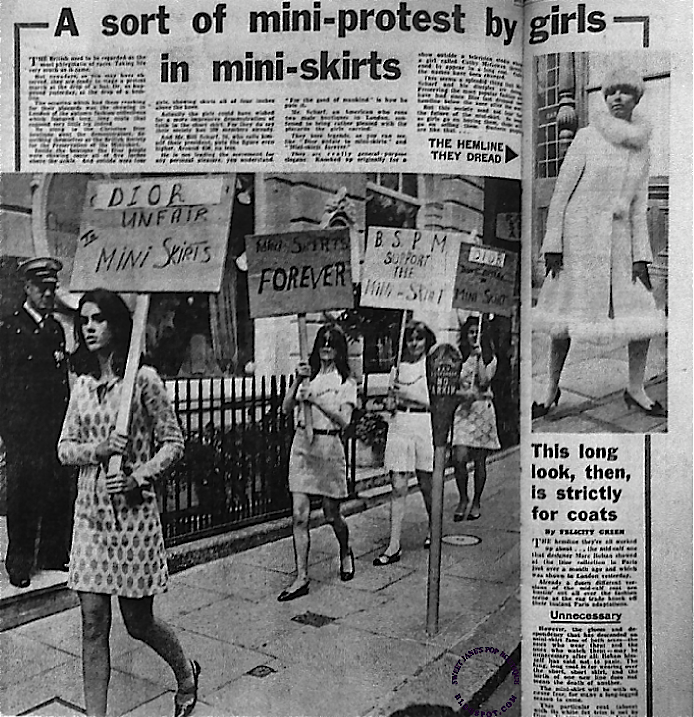 Far Right: White coat with fox fur trim available from the Carrot On Wheels, as seen in The Daily Mirror, September 7, 1966.

Well, it's taken quite a while for some new information to surface, almost two and half years, and apart from one intriguing comment (see below) which unfortunately came to nothing, virtual tumbleweeds have otherwise been blowing through this particular post. But, i've finally found some very rare footage of The Carrot on Wheels among the new additions to the Kinolibrary Film Archive, which includes various shots of the boutique's facade and window display, as well the surrounding area on the Fulham Road, taken from different angles. Definitely worth a look, because you'll also find some previously unseen rushes of Granny Takes a Trip at 488 King's Road straight after it!

Fantastic footage of the Carrot on Wheels boutique and more, in this recent upload to the Kinolibrary Archive.


LINKS
The original location of The Carrot On Wheels 84 Fulham Road S.W.3, as it is today here. My previous post about Sex, Sense And Nonsense - Felicity Green On The 60s Fashion Scene here. A QUEEN fashion editorial featuring some more items from The Carrot On Wheels on the excellent Get Some Vintage-a-Peel blog here. Further information about 'The Bend' dance craze can be found over at The Holy Church of Iggy the Inuit here. And finally, all things Bailey can be found here.

On November 8 (1967), a panel of judges from The Sunday Times Magazine chose the ten finalists (their work is shown below) who will compete in the British heats of The Sunday Times Magazine Eurofashion Competition. The response to this contest (the first in which entries from 12 other European countries will compete in the international finals) was even greater than for the one we ran last year when over 3000 people entered. And this year the judges felt the standard of work received was even higher than for the last. Each of the finalists will now make up the three designs shown on their card and these will be judged by a panel of young fashion designers - including John Bates, Gerald McCann and Roger Nelson - who will make the first three awards. The first prize-winner of this heat not only gets  The Sunday Times Magazine cheque for £100, but will go forward as our representative to the Eurofashions finals on March 21 which will be televised by the BBC from the Deating Hall of the Oxford Union. 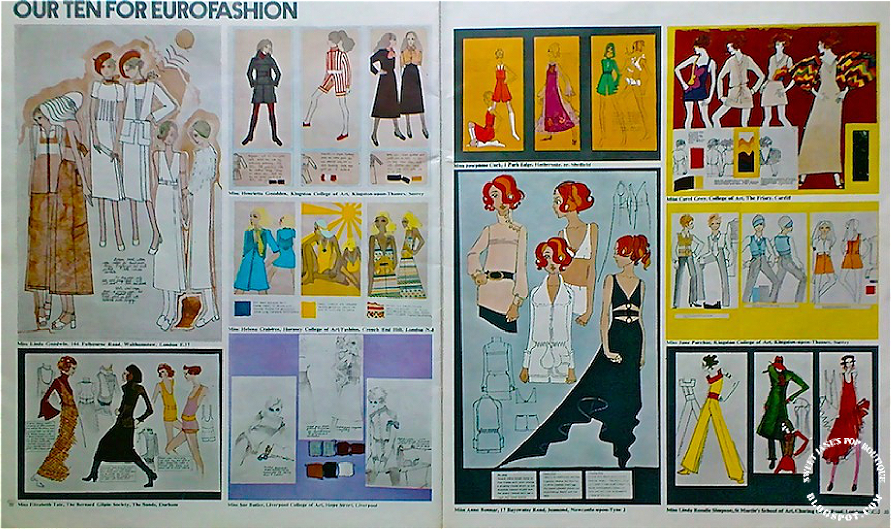 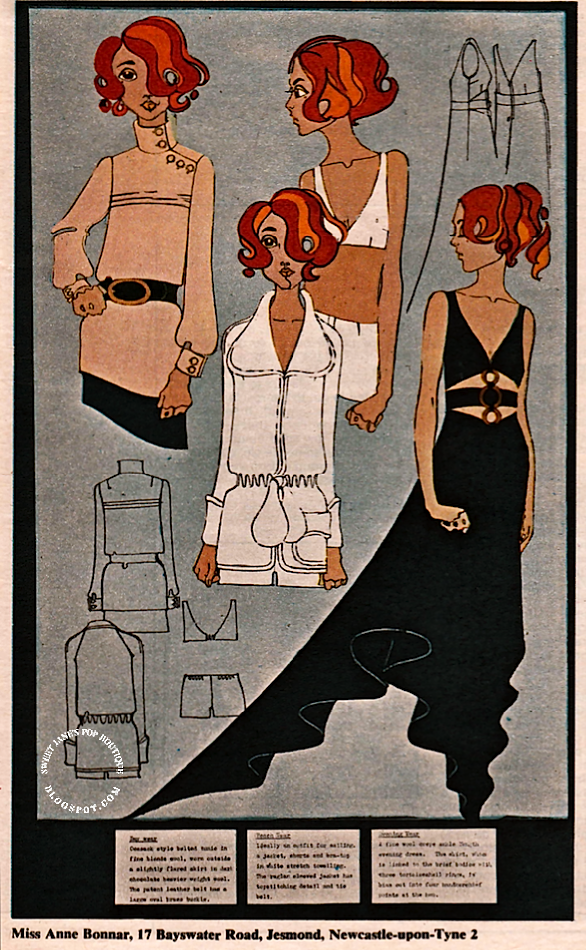 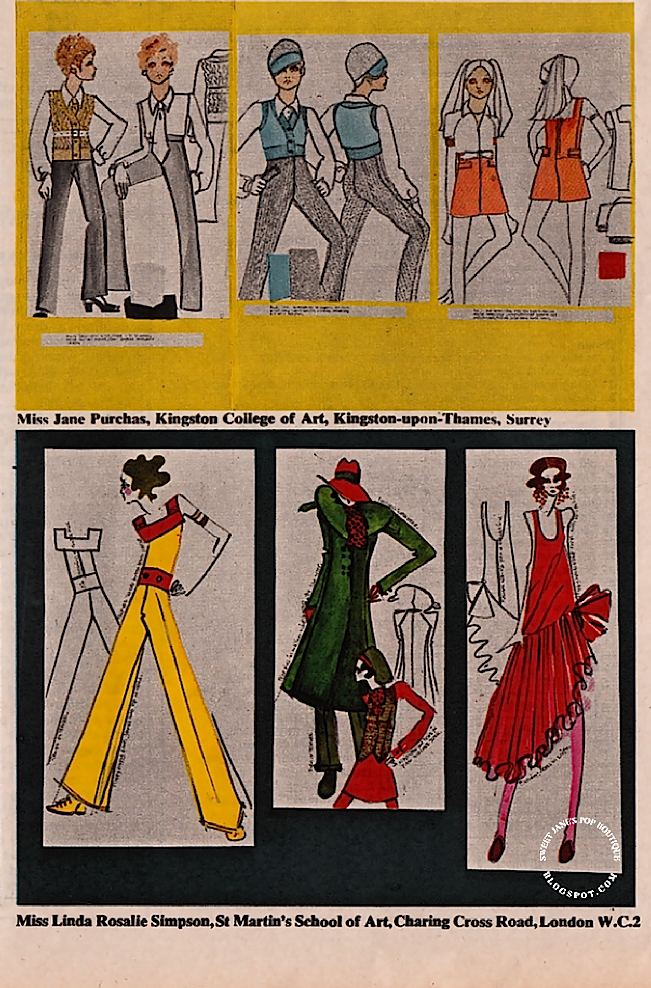 Although the Eurofashion International final was televised by the BBC, I couldn't find any trace of film footage, however, while I was researching the event I came across a photograph of the winning entry from the Irish participant Glynis Miller (a graduate of The Grafton Academy of Fashion Design in Dublin) published by the RTÉ Guide in February of 1968, and also a photograph of model Paulene Stone wearing the black dress with midriff detail by Anne Bonnar as illustrated in the The Sunday Times Magazine article. 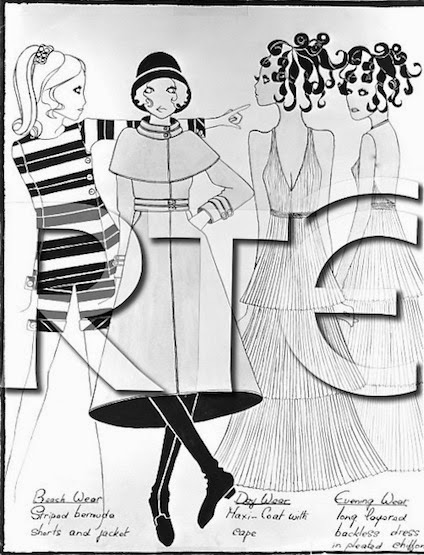 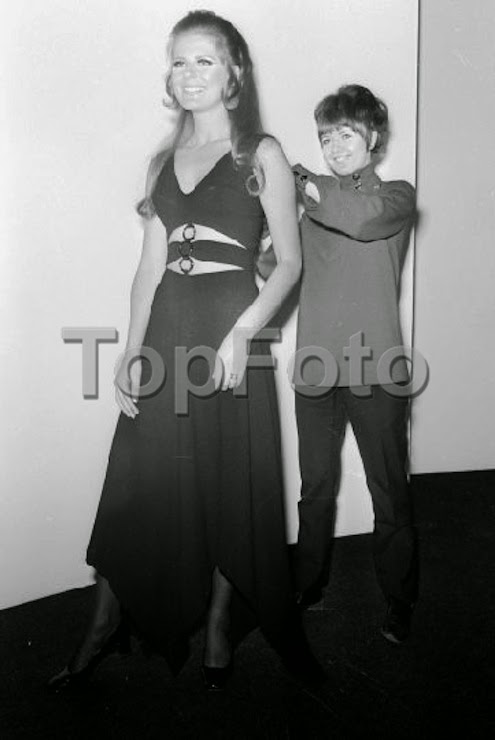 Oxford England: Twenty - one - year - old Anne Bonnar, a student at the Newcastle College of Art, makes a final adjustment to the dress she has designed for model Paulene Stone ― and Britain ― in the international Final of the Eurofashion '68 contest, which took place at the Oxford Union Debating Hall here tonight. The final of the contest―open to young men and women under 23 who do not make their living by designing or sewing is the culmination of national contests held simultaneously in 12 participating countries during the past six months, 21st March 1968.


IMAGE CREDITS
All images & orignal text scanned by Sweet Jane from The Sunday Times Magazine, January 7th, 1968. *except for the illustrations by Gynis Miller courtesy of the RTÉ Archive & the final photograph of Anne Bonnar with Paulene Stone courtesy of TopFoto Archive. 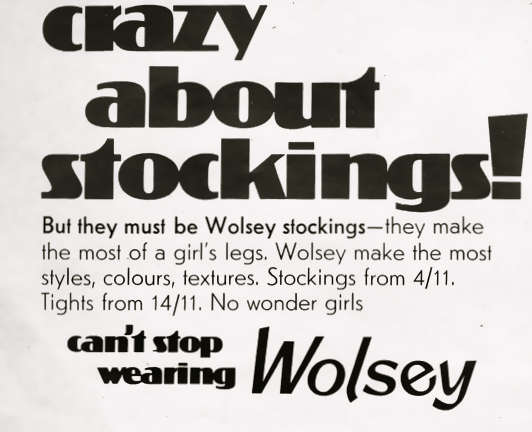 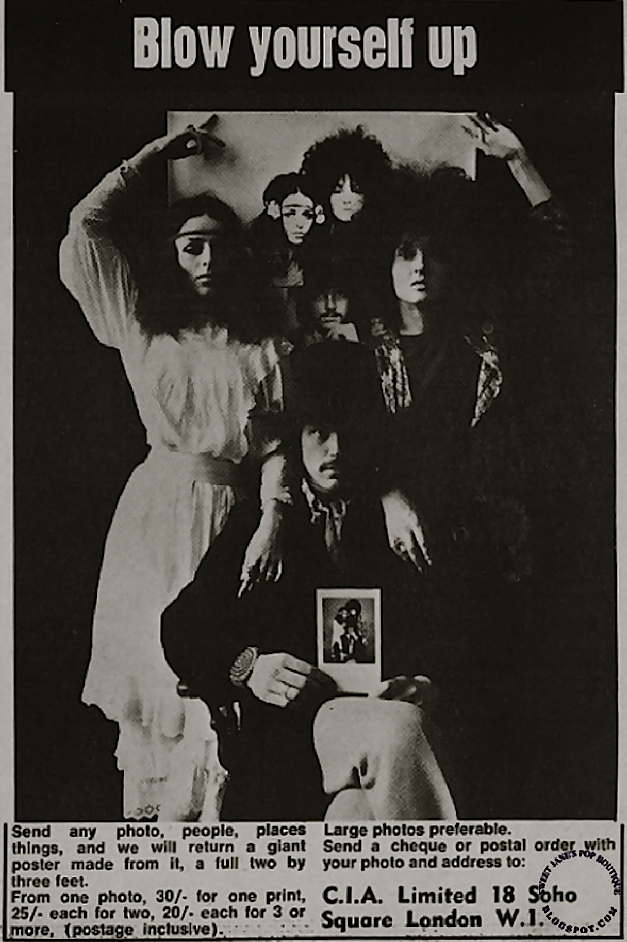 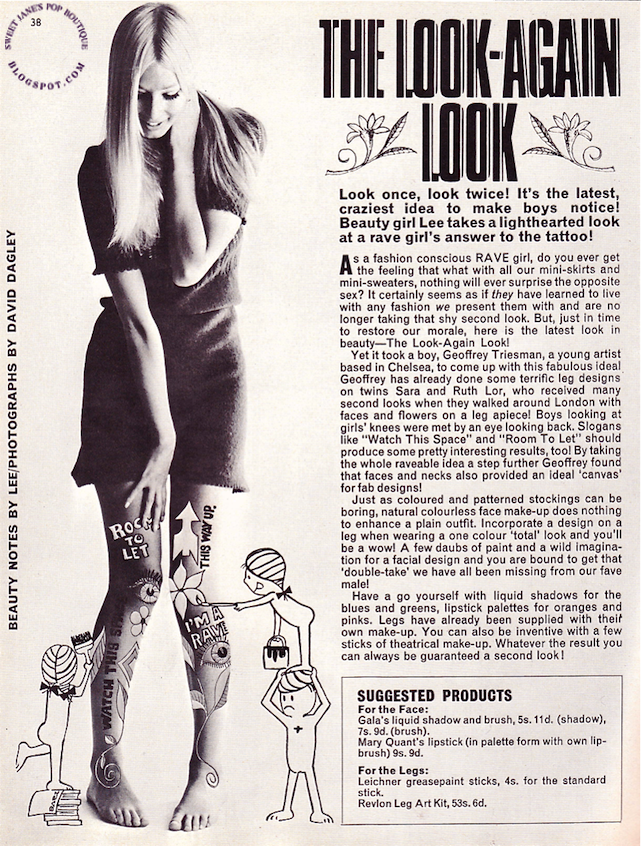 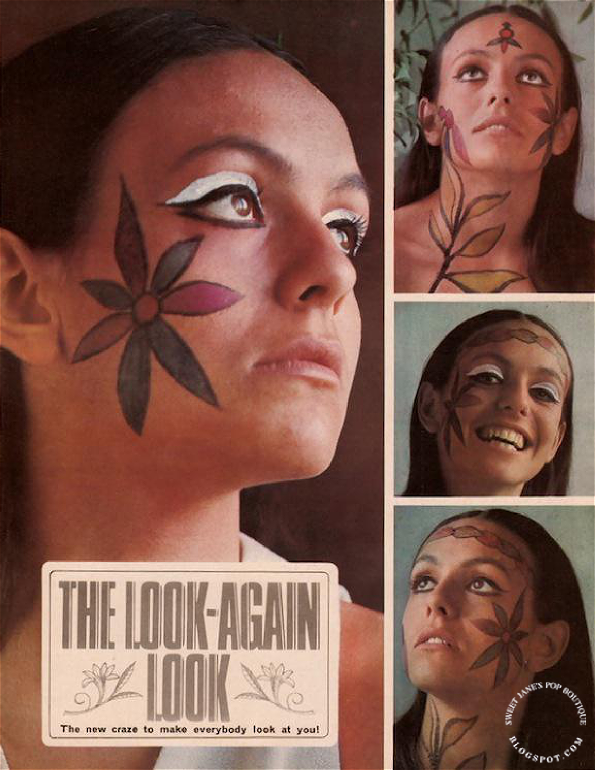 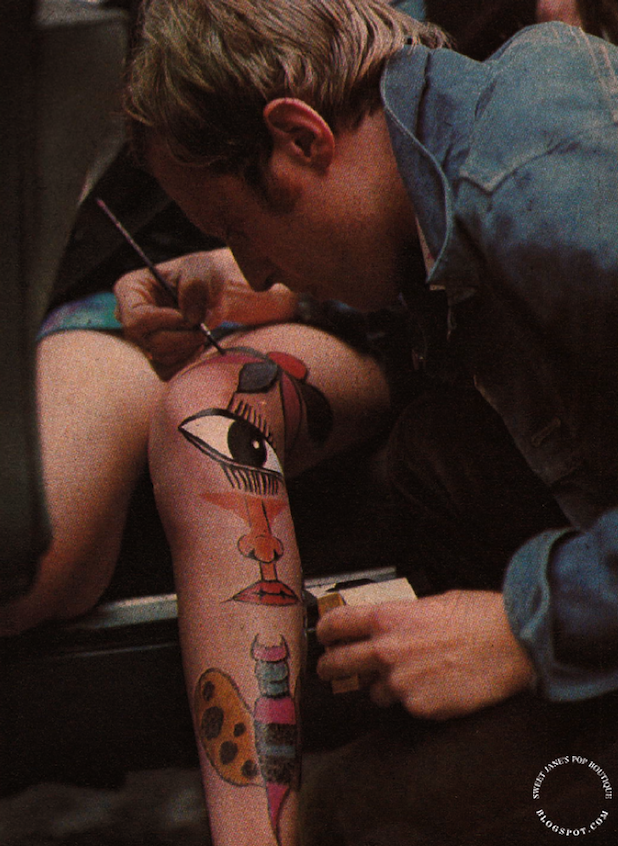 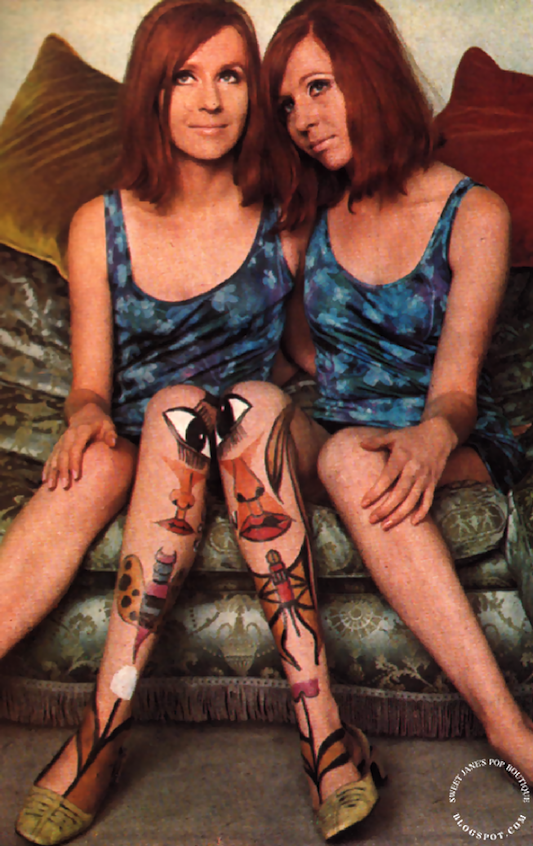 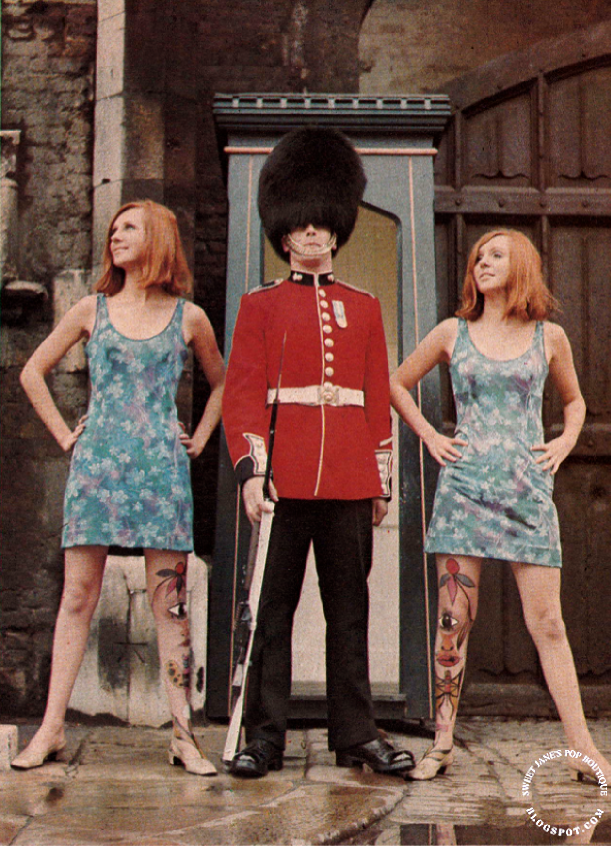 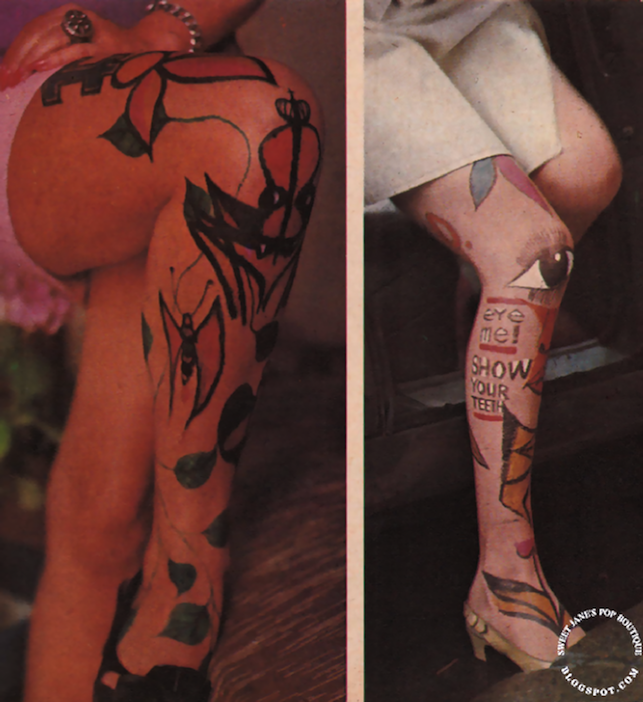