THE FOOL AND APPLE BOUTIQUE

I'm pretty sure that anyone who is interested in The Fool Design Collective, will most probably have already seen all of these images of Apple boutique reproduced online, time and time again, via Tumblr and Pinterest etc. However, as striking as they are alone, I think the original article which accompanied them is more than noteworthy.  Although, it certainly sends the rose-tinted view that many of us now hold about the general attitude to life in the 1960s crashing to the ground. Unfortunately, it wasn't all peace, love and liberal attitudes, it was pretty much the same then as it is now, and always has been whenever the average man in the street is presented with something entirely new that he doesn't quite understand yet. So, lovers and haters and bigots abounded in equal measure, a particularly fine display of which you can find in the second paragraph! But, at least for a moment in time, albeit too briefly, The Fool and the Beatles tried to illuminate Baker Street in more ways than one.

The Apple is open―psychedelamania let loose on white paint with a million rainbows in the basement. It's an extraordinary department store backed by the Beatles and created by Four designers - Simon, Marijke, Josje and Barry - called The Fool. Apple is them. Apple is the Fool, the Tarot card-figure zero-innocence; the four who stand between the Beatles and the Apple, and offer Apple to the people. Wild wizardry in the sludge of Baker Street. The building was a high, white house on a corner, and now it is jampacked with the color scene of Apple's beautiful people. Before this blaze, before the advent of the Fool, people looked at the scaffolding bruising pure white wall, and wondered, "What will they do? What will come next?" and they glimpsed the pots of paint with magical labels saying Sulphur, Marigold, Lilac, Midnight Blue, and snuck through the heavy glass door to see what was that skimming past in skintight velvet pants and Jesus hair.

Across the road, the shopkeepers gaze, gulp, think again about their own windows. " They'll cheer us up a bit." ..."It's about time we had a face-lift." ..."I must put up some of me sykerdilic material on display; we'll be getting the kids up here now." And so they do. Staid old Baker Street, home of the maiden aunt, is buzzing with wasp stripes and fluffy with feather boas as the teenies don their kneeless garb and hop to Apple. But watch the huge distrust on the street. Beige faces batten on the glass windows which are walls and windows in one. They scowl at the brown-skinned plaster dummies draped in shout-red satin. They hate at the long-haired, sweet-faced boys. Rattling London buses skid to a halt at the traffic lights outside the shop, and brown-uniformed schoolgirls jump up to catch this explosion of light. "Ooh, look at that!" There are sparkling suits of light and gypsy silks. "Do you think they're real?" "Me mum wouldn't be seen dead in a thing like that." "I wouldn't neither, it looks right daft." "But they're ever such lovely colors, aren't they?" "They're certainly nice and colorful," nods an old lady behind her. "it's good to see something colorful. I say good luck to the young people. I like to see something lively." And this from an old dressmaker, clothed herself in brown and black, envying the imagination of the young.  Up the street storms an angry man. "What do they think they're doing? It's people like them sending Britain down the drain," he screams, shuddering with impotent rage. "They're unhealthy, they're evil, they're bad!" But his only alternative was the drab coat and the drab routine and the drab thoughts that he had spun around him, so he went away quietly when a middle-aged woman attacked him for being bigoted.

"Art is for everyone," says Simon, "not just for a handful of people who speculate with money." So, true to his word, he sells his paintings as posters for ten shillings (10/-) each, and Marijke sells her intricate designs for the same, and Josje makes fantasy clothes for practical prices. And the Fool bring their magic to the masses. There's a wooden hand offered in greeting as you move to open the door. If you don't look out it will swing back and grab you in the guts. Watch how you treat that hand―it's the one that feeds you the enchanted Apple, and maybe you'll never be the same again. Swing into a goldfish bowl, and disregard the street stares. Crushed blackberry Fool carpet and zombies zooming in sparkling Indian costume. Plastic plants, polyethylene chairs and gluey dahlias rioting in the three-tiered gilded fountain rearing out from the stars and the moon and the sun. Stars spurt from the navy-blue ceiling. Rainbows split across the walls. Beatles blare, and sometimes the sitar soothes. Alexis, the electronic genius, has wrought his spell and the lights jump with the music. Plaster Fools cavort in the window while the navy-breasted passerby stand transfixed. Oh Apple, are you as good as you look? Can you keep your core intact? Well. Just to look that good is cool. Just to have turned on the West End fuzz and the taxi driver who said hey-why-don't-you-light-it-all-night and the lorry driver who went home to tell his family he'd seen a psychedelic supermarket spring into being on Baker Street. Just to stop people in their deadly tracks and wake their dying minds and change Baker Street from it's tomb-like drab to show them, to give them the opportunity to see, to help them reach it just for one moment. The startled moment of awareness before the objection and hostility come flooding in. Just to do that is OK. 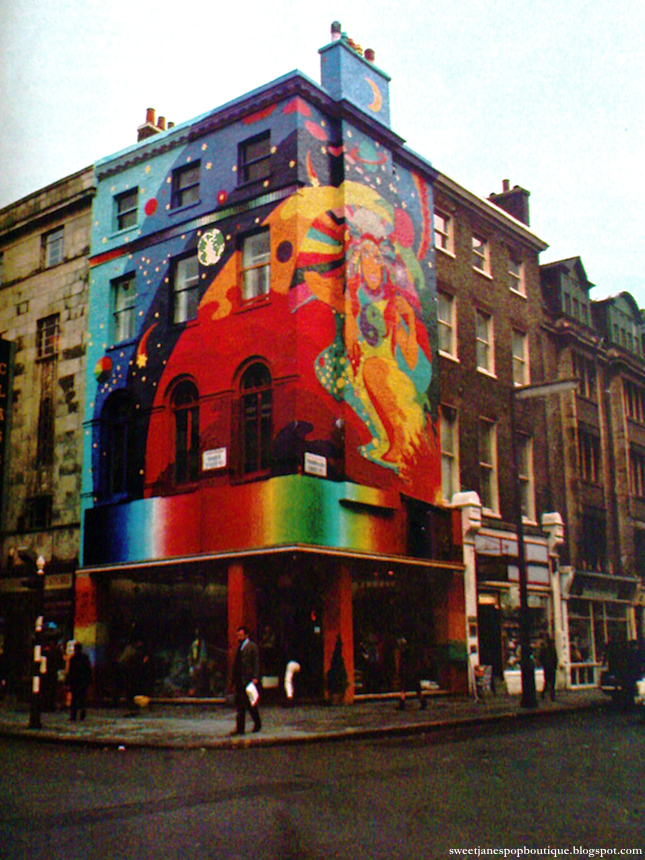 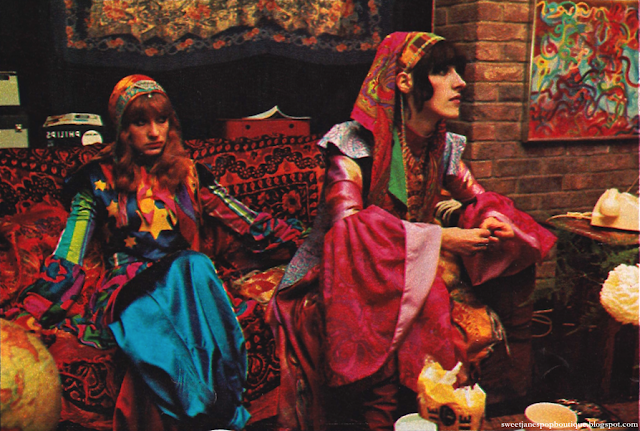 The Fool at home, Marijke and Josje. Marijke says: "Color is an expression of light. It all lies in evolution. It goes from black to light; the gray lies in-between. Josje says: "We want our clothes to be practical as well as beautiful." 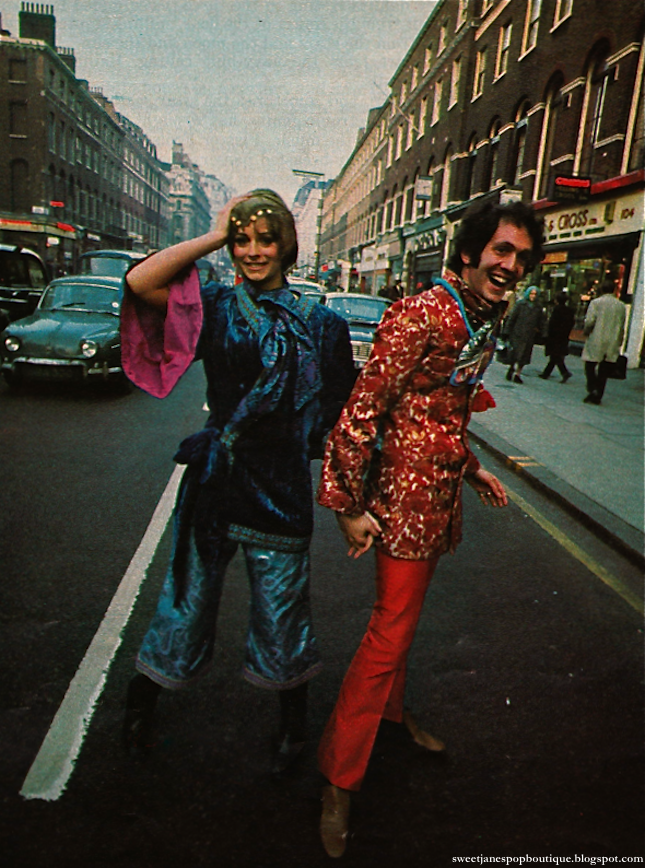 Ed and Cheryl frolic on Baker Street. Ed has on Liberty print velvet J.C. jacket and Nantwich satin trousers. *Unfortunately the correct details about Cheryl's outfit in this photograph were omitted in the original magazine article and mistakingly replaced with the item details for the outfit on the left in the photograph below. 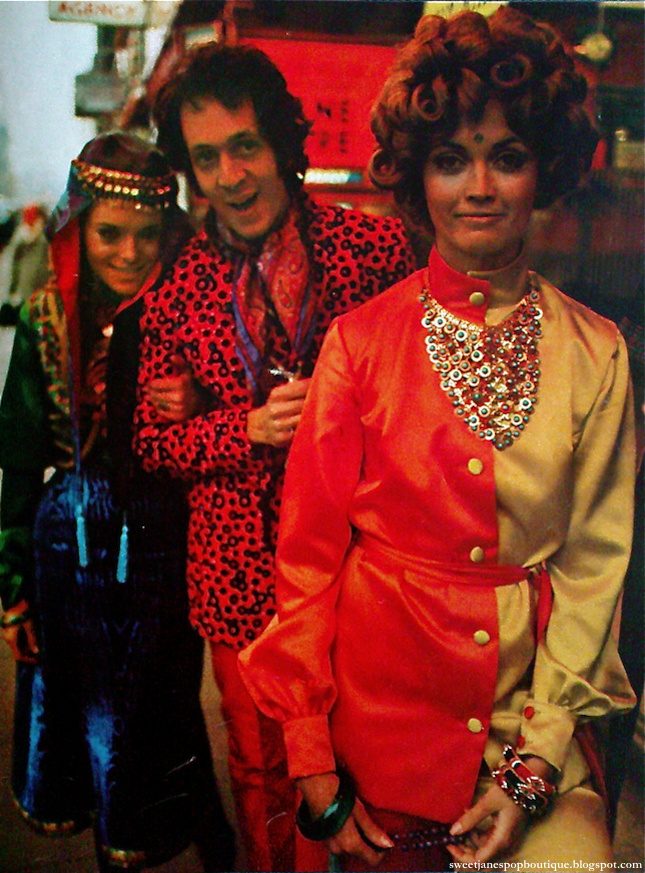 Sam, the girl in the foreground wears Turkish Delight in yellow and orange satin. Ed and Cheryl in their regalia, peek out from behind. Cheryl wears crepe satin Daisy blouse, brocade flipster vest, moire velvet maxi-skirt and organza headdress.

IMAGE CREDITS & LINKS
All content scanned and transcribed by Sweet Jane from EYE Magazine, April 1968. All photographs by Lester Waldman. All original content by Danae Brook for Eye Magazine, April 1968. View some of my other Apple Boutique related posts about The Fool including a feature from Rave magazine Apple Clothing - Apple Boutique; plus a feature on The Fool Design Collective from 1967. Visit Marijke Koger-Dunham's Website. Discover more about Yosha Fashion Amsterdam, you can also visit Barry Finch's youtube channel, and Simon Posthuma's website. And finally, view Jenny Boyd ‘Staring Into The Face Of God’  a filmed interview with Jenny, by Iain McNay for Conscious TV.