I purchased this Lp sometime around the late 1990s, in the second-hand section of a record shop in Dublin called 'The Secret Book & Record Store', which is very suitably named, because although it's located less than a minute's walking distance away from one of the principal shopping streets in the heart of the city centre―it's completely obscured from view. Firstly, behind a rather inconspicuous doorway on Wicklow Street, then further on down the end of a long, narrow corridor, and after that, behind yet another door! Therefore, not exactly easy to find, but definitely worthwhile once you have! The lp itself is a double, released by CBS in 1970 as the fourth and final in a series of budget-priced rock sampler albums. It features 26 tracks in total, from various artists such as Bob Dylan, The Byrds, Blood Sweat & Tears, as well as Dublin's own Skid Row.


And although I have one other in the series, this is definitely my favourite of the two from a visual point of view, musically I prefer its predecessor from 1968 which was called 'Rock Machine I Love You'. However, I was instantly attracted to the Rock Buster's sleeve design which features a newspaper print photograph of Arnold Schwarzenegger from his Mr Universe days―superimposed onto a vibrant red and yellow pop art graphic background...and was therefore compelled to buy it because it reminded me of aspects of the work of so many artists that I admire, from Peter Blake to Richard Hamilton. Being a classic 1970s double album, it also features a gatefold sleeve (the champion of cover art and loyal friend of the liner note) making even the inner cover noteworthy. A more detailed view of the track listing can be found over at Discogs. And you can view the work of pop artist Peter Blake as mentioned above, in one of my previous posts. 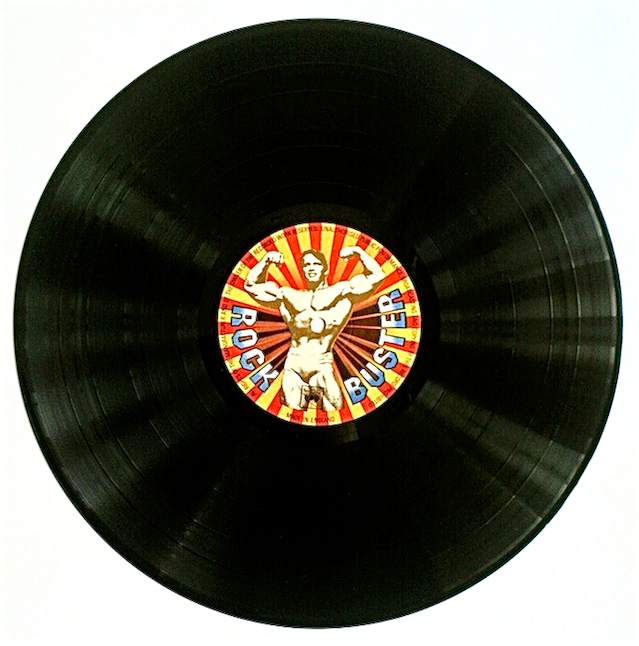