A single poster shop in London sold 300,000 posters last year: that's over 1,000 a day. Posters are notices, advertisements, propaganda, pretty pictures. They reflect the fashion in graphics and in ideals of the times: "Beat the breathalyser, smoke pot" hangs beside Beardsley's pornographic illustrations of Lysistrata in one book shop, while all over the poster market, Vietnam, Che Guevara, gangsters and the 1890s lay their claim to popular liberal opinion. Imported American and Polish posters advertising anything from bread to circuses have a wide appeal, and coffee-bars and offices leave their "psychedelic" posters up long after the occasion they advertise has passed. Some cinemas in Ireland still write their posters by hand, but in England and America subtle and skillful printing methods are used and experiments made with inks and paints.


They admit they're "selling in a very pop way", and work on the funny smut. "You can see people in the shop reading Logue's Why I Vote Labour. When they get to 'I vote Labour because if I do not my balls will drop off', you can see them pick it up and buy it. It's always like that." Ralph Bowmaker, trained in advertising, believes that most of the selling power of a poster lies in it's colour, but Tom Salter thinks people buy for the content, encouraged by the colour. "You must have a bit of sex and a bit of war. Funnily enough when we did a poster saying 'Sex War Sex Cars Sex' we thought we had the formula right down to size, but it didn't sell. The most vivid imagination behind the posters sold by Gear is Christopher Logue's. "I've always been very visual. I think if I could live my life over again I'd be a painter. Of course one always says that but I do feel it. I get on better with painters than with literary people." Logue has translated some of Homer, written several books of poetry, an ironical ABC, and appeared on television as  necrophiliac Swinburne in in Ken Russell's film of Dante Gabriel Rossetti. "Sometimes a poster poem comes straight away, like Why I Vote Labour. Some magazine in America wrote to me and said they were sure I would be voting Labour at the next election and please would I write and tell them why. I started writing all those dreary things about: I believe that if there is a form of socialism possible in this country...." but then I couldn't go on, so I wrote the first thing that came into my head. And they printed it! After that I turned it into a poster." Logue is now a partner in Stone's Posters, called after Bernard Stone, his producer. He can make £200 to £300 on a poster: not much, but then he enjoys doing them. They are after all a perfect medium for the iconoclasm that delights him. Logue, has contrived, as subtly as can be, to keep a a tough gutter language, and make it a form of  eye catching literature.


Often the psychedelic poster, is a non-poster, in that it doesn't advertise anything specific, and if it does it's message outlives the occasion it is advertising. More often than not, it is a reflection of the designers's personal interests and fantasies, the voice of his ideals, wishes, peaceable rebellion. Among all the designers who traffic in dream worlds, Mick English and Nigel Waymouth, both in their twenties, stand out. They work together and call themselves "Hapshash and the Coloured Coat", an innacurate reference to a god they found in the Egyptian Book of the Dead. They started doing posters for the now defunct club UFO and mostly now advertise pop groups. Their posters marry Hindu symbolism with art nouveau flourishes and with cunningly disguised erotica - butterflies on closer examination turn out to be genitals. The colours are delicate golds and silvers, or blazes of violent fluorescent paint. Their aim is total sensation, the total environment, with every sense engaged. Posters are only "a stepping stone towards mass visual awareness," says Nigel Waymouth. "The only intellectual thing about this is to try to get visual and consciously aesthetic values established in the street, to take it one stage further than TV, cinema and advertisements." Together, therefore they are embarking on a "total" programme. They design record sleeves, they've equipped a dark-room so that they can use photography in their designs, and they've cut a record themselves, called Following a fantasy or Nothing succeeds like sex. 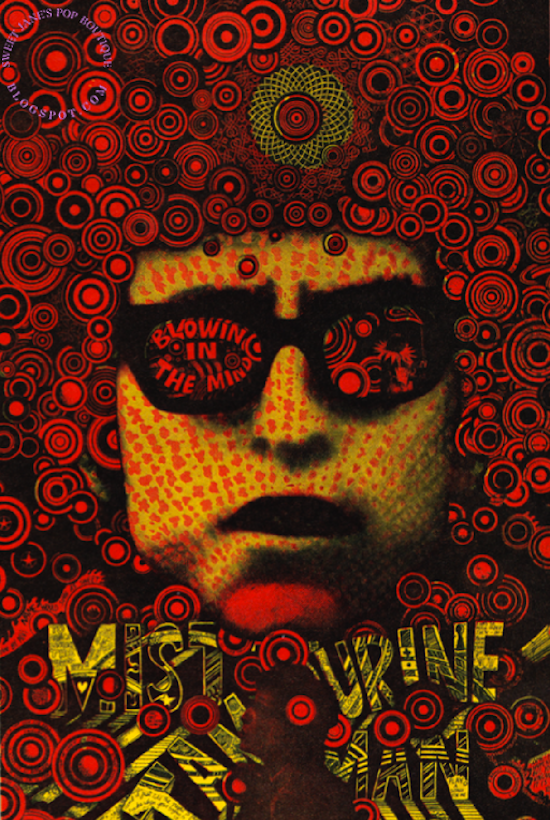 American folk singer Bob Dylan, the greatest cult figure of the Underground, inspires many posters. One of the most impressive works of the ephemeral poster scene is this version of Dylan by Martin Sharp, who designs for Oz magazine.

Impetus for the psychedelic poster came not only from the American underground, but also from Australia. Oz, a monthly satirical magazine, moved to London from Sydney in January 1967. Since then it has issued posters inserted into it's pages, printed fold-out covers as posters, and even printed a whole issue on the back of a poster. The subject matter has ranged from a caricatured Wilson calendar to love-children offering their flowers to Tantric lovers in position 70. "We got lots of letters saying it was impossible". Martin Sharp, 26, brought up in Sydney, used to design for Oz. Now he works for it only when he feels like it, but the rarer strokes of the magazine are still usually his. He dreamed up the issue that was printed on the back of a poster, bearing the legend "Plant a Flower Child", but he also freelances as a poster-designer. His designs are crowded, detailed and witty. In the collage poster for the legislation of Marijuana Rally in Hyde Park last year, he cut out Red Indians from a 19th Century traveller's book of tales, and many innocent figures can be seen to be smoking intriguing and questionable substances. For him the attraction of posters lies in their cheapness and availability. " I think galleries are dying because they charge so much. Art is a very big business now, and people don't buy for pleasure but for investment." Martin Sharp's Bob Dylan fantasy is one of the best-selling posters in London., having topped the 10,000 mark. "That should bring in £300 to £400 in royalties, but of course I haven't seen any of it yet. It's much more than I ever got for a painting." 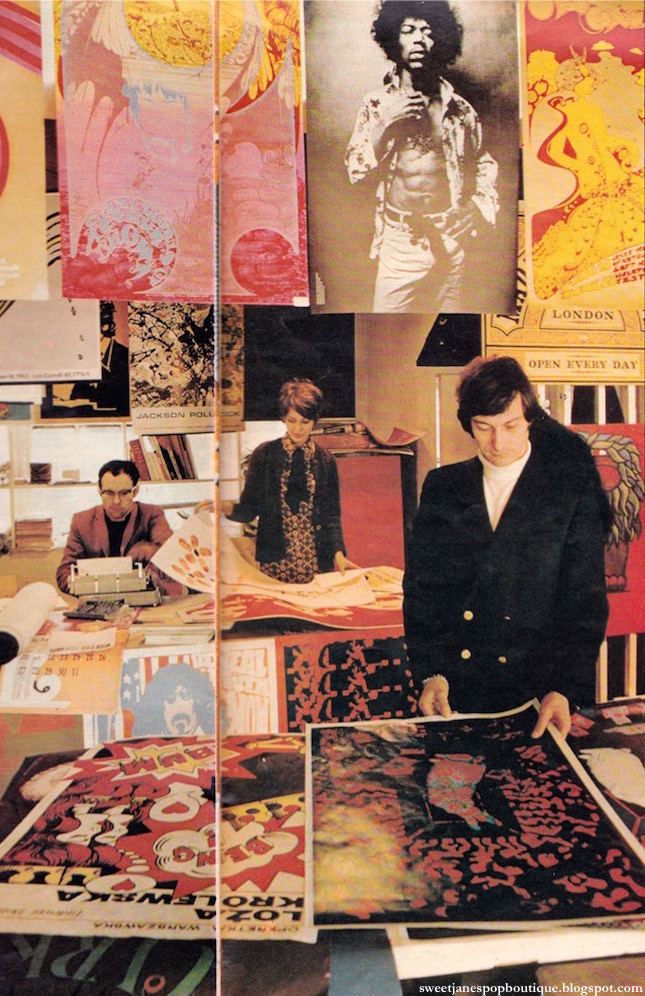 "HANGUP", a poster shop which was opened in Islington last October by Bob Borzello (left), now sells up to 2,000 posters a week.

Shops specialising in selling posters are also opening all over the country. Managers such as Bob Borzello, 31, from Chicago who runs Hangup, and Mike Phillips, 24, of Forposters, are genuinely keen and enthusiastic about posters as art. As Bob Borzello says, "They're not just reproductions. This is a genuine Warhol, and this is a genuine Lichtenstein, because they did them as posters." Certainly the Tate agrees with him, for in its recent Lichtenstein exhibition, a huge poster advertising the artist's earlier show in Pasadena was hung alongside his canvases. But then posters have become a form of art after all.


IMAGE CREDIT & LINKS
All content scanned and transcribed by Sweet Jane from an original article by Marina Warner for The Daily Telegraph, April 10th, 1968.  All photographs by John Marmaras. Except for the Bob Dylan poster image by Martin Sharp which I scanned from the Observer magazine, 3rd December 1967. View the trailer for Black on the Canvas: the forthcoming feature length documentary about the life and times of the artist David Vaughan. Further information about the artist Nigel Waymouth can be found on his website.  Discover more about the poet Christopher Logue, and the artist Mike McInnerney, More from Tom Salter of Gear Carnaby Street in some of my other posts, including Design for living 1968 and Carnaby Street by Tom Salter 1970. Dandy Fashion: New plumes in the peacock's tail 1968 which includes another example of a suit from Blades. And finally, more on The Psychedelic Poster Art of Michael English and Nigel Waymouth.
Posted by SWEET JANE at 09:28