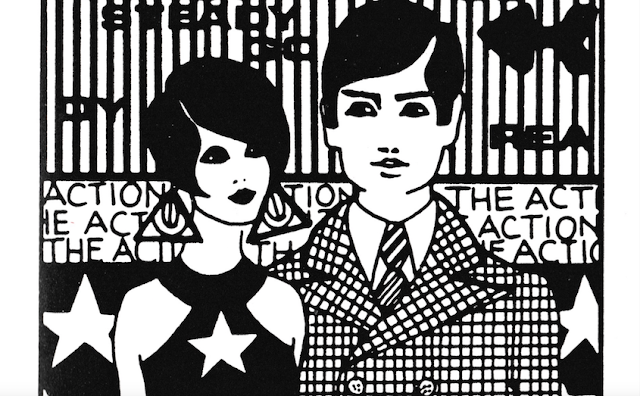 Whenever the British boutique boom of the 1960s is mentioned, the focus is always immediately centred upon London, and predominantly on the Carnaby Street and King's Road areas. Nevertheless, as the boutique phenomenon wasn't merely confined to the Capital, I'm pretty sure that there were equally influential and important boutiques in some unlikely location off the beaten track in just about every city, town, and village throughout the land at some point, and that their legacy still lives on in the memories of the teenage clientele who frequented them. And yet, I feel that it is in someway a cultural loss that so many of them have not been properly documented, with the exception of  The Birdcage in Nottingham, which was covered quite extensively by Marnie Fogg in her book about the boutique culture of the era. Perhaps saved from obscurity while others were lost, purely through its connection with the evergreen career of designer Paul Smith, who played a pivotal role in its origin and has therefore taken it through time with him as he moved on. 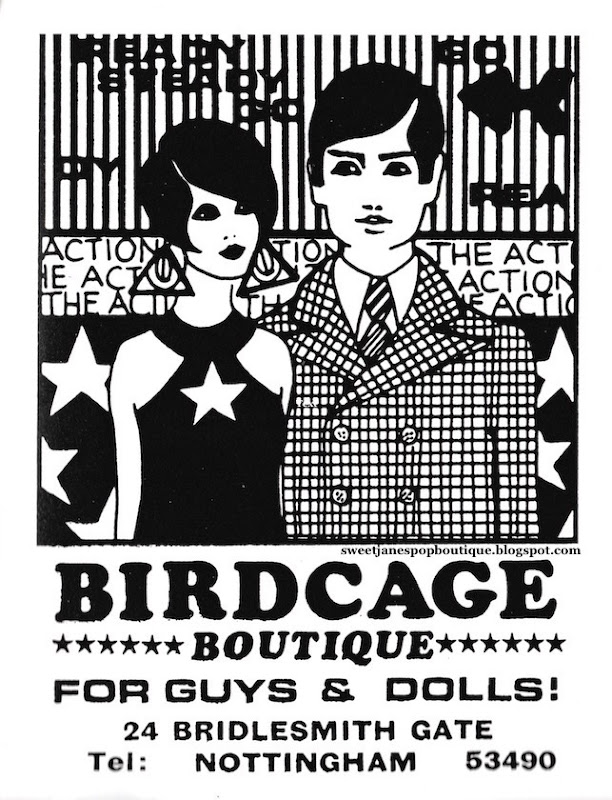 Advertisement for the Birdcage Boutique designed and illustrated by Ian Longdon.

The Birdcage was the brainchild of designer Janet Campbell, a native of Nottingham. After leaving college she spent some time working for other people in the fashion business in London, where she formulated the plan to open her own shop. Upon her return home in 1965, she gave herself a week to find a suitable property for the new venture, and with the help of her friend Paul Smith, quickly found the ideal location in an old tailors shop at the end of Bridlesmith Gate, paying twenty pounds a week for a six-month lease. The shop became an instant success, with a queue of people three rows deep outside on the opening day admiring the window display by Smith. A year later in 1966, Janet Campbell expanded the business, moving the machinists from the first floor of the building to make way for a menswear department which she asked Paul to run, he in turn travelled to London to source labels which were previously unknown outside the city, and over the next four years built up an extensive customer base for the boutique throughout the midlands, until 1970, when he made his departure from The Birdcage to open his own shop, and the rest as they say is history. 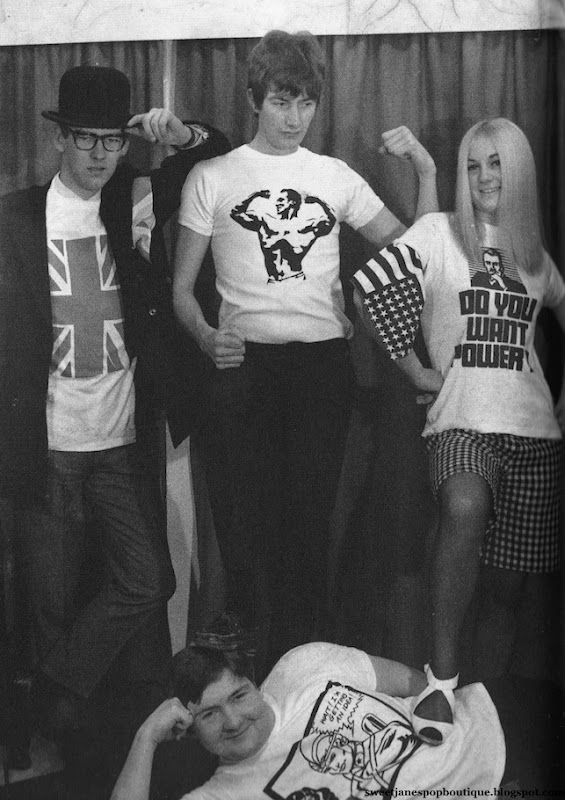 The staff of The Birdcage in Nottingham 1966: Ian Longdon, Paul Smith and Valerie Longdon. They're wearing graphic t-shirts, a new phenomenon sold through mail-order by the satirical magazine Private Eye. The shirts were designed by Nottingham art student Dave Humby.

The story of The Birdcage ends in Marnie Fogg's book with the departure of Paul Smith, and as far as I can gather, it continued to trade at the same location until it moved elsewhere in the late 1980s, but I have no idea what became of Janet Campbell or any of the other key figures within the staff from that point onward, or how far into the next decade that it continued to exist. However, while researching the information for this post I did find an amazing array of other boutiques located within the Nottingham area which I wouldn't have been aware of otherwise, even though more boutiques opened in Nottingham during this period than in other comparatively larger cities such as Manchester and Birmingham.
The following are just a few names and details of what I have discovered so far: Carnaby Styles―which was situated in Wheelers Gate in the early 1970s (sold Budgie Jackets, Tank Tops and Loon Pants); Pennnyfeathers owned by Mike & Shirley Benwell, would later become known as Gladrags/Backstage; Peru was run by a girl called Zena, circa 1973; Image Boutique in St Peter's Gate (sold Ossie Clark/Radley); Grapevine was situated on Goldsmith Street next to Paraphernalia; Campus was on Victoria Street (it sold Jeff Banks and Mr Freedom gear); Madcap Boutique on Carrington Street circa 1966 (ladies clothing made on the premises, shirts for guys made on request); Bus Stop (a Lee Bender outlet); Nonsuch boutique which was situated in the Bridlesmith Gate/Byard lane area (they sold hippie clothing, afghan coats etc.); Razzamatazz was on Trent Bridge; Boogaloo (no details yet); another boutique called I'll Leave It (sold high waisted flares, bowling shirts circa 1973).
And finally, Roxanne and Roxy Threads (1972), which were both run by Robert Ivars Michailov-Mètra, otherwise known as Roxy Rob. I've left this one until last because I have managed to unearth a little more information about it than the others, which you can read for yourself via the link above. And I suggest that you do! He's quite the character, and the man has also made everything from loon pants in the late sixties to Oxford Bags in the early seventies for the Northern Soul scene enthusiasts. 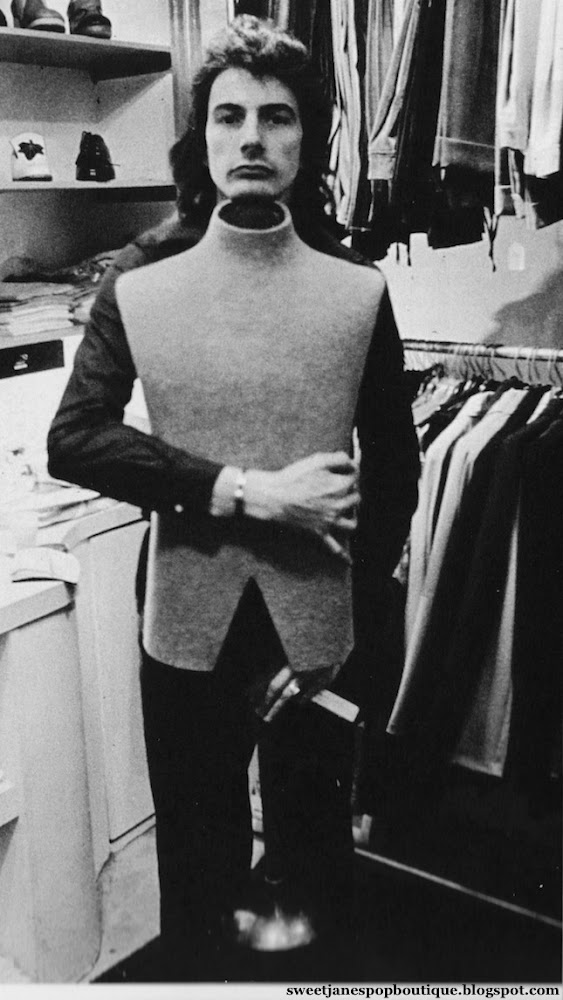 Paul Smith photographed at his first boutique in Byard Lane, Nottingham, which he opened two weeks after leaving the Birdcage. It was a very small space measuring a minute 3 metres x 3 metres at the back of a tailor's shop. The rent was free for the first three months and fifty pence a week thereafter, the use of a damp basement was also included in the agreement which Paul eventually turned into an art gallery called The Pushpin, exhibiting limited edition lithographs by Andy Warhol and David Hockney. He remained here for the next four years, opening for business two days a week (Fridays & Saturdays). A full scale recreation of this shop is included in the current Paul Smith exhibition at The Design Museum. 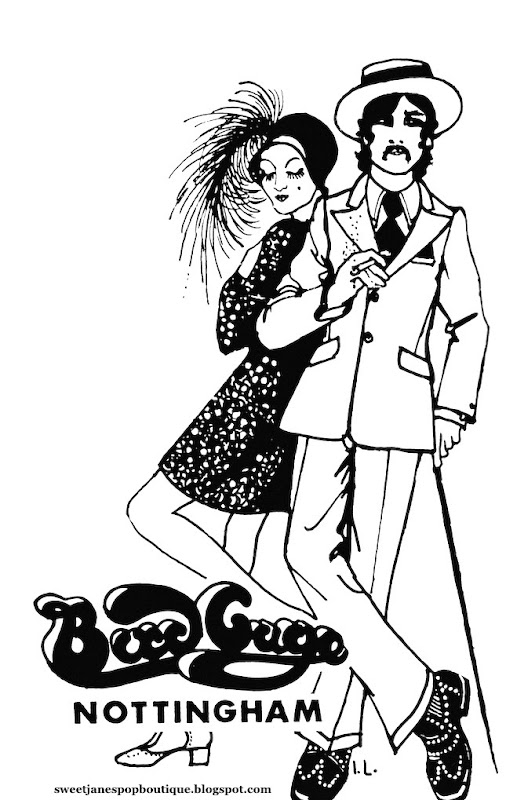 A Birdcage swing-ticket, with thirties and forties cinematic references, designed and illustrated by Ian Longdon, (1971). 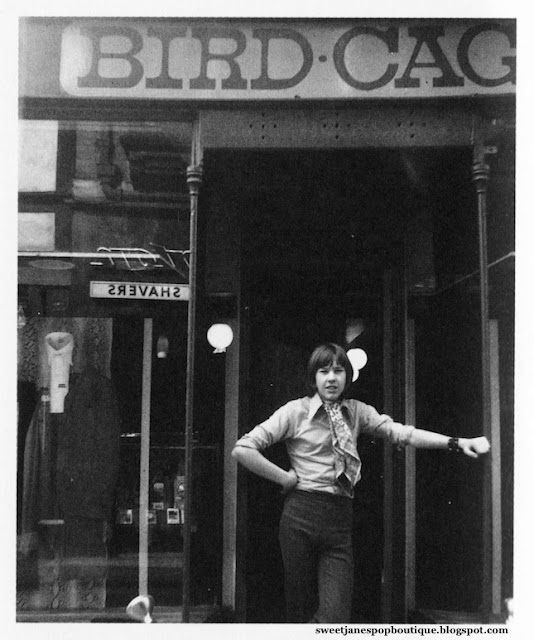 Greg Longdon outside The Birdcage in Bridlesmith Gate, the original Edwardian facade was reworked in maroon and gold to suggest that a trendy boutique now lay beyond the traditional tailor's shop. The Boutique sold garments designed and made by several people under their own label. Ian Longdon not only manufactured the clothes for the shop but was also the man behind the publicity and packaging design, constantly updating the style and presentation. 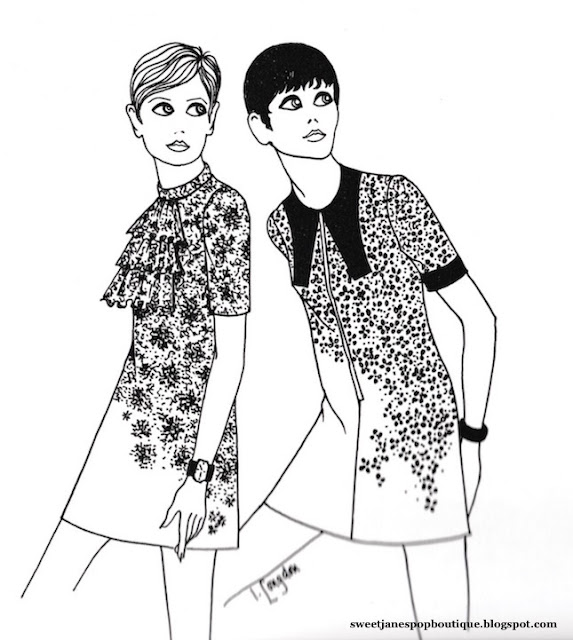 Designs by Ian Longdon for The Birdcage. 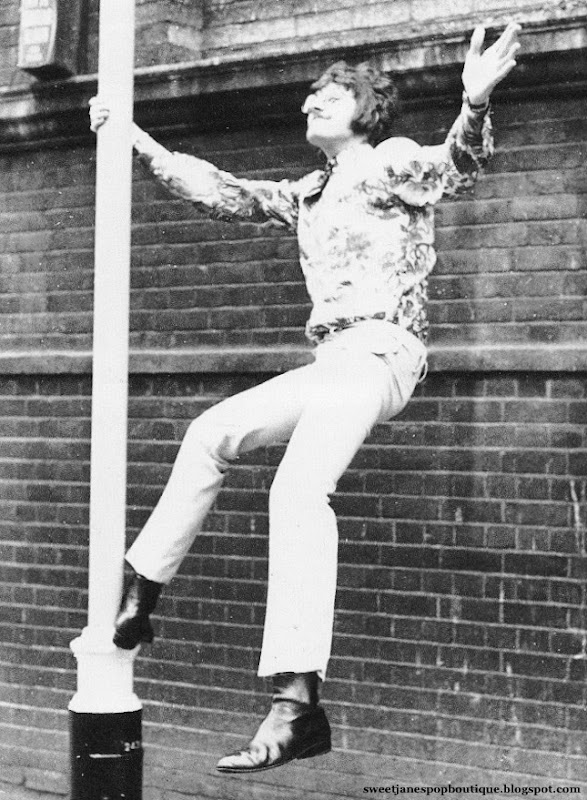 Paul Smith outside the London Electricity West End power station which was situated on the east side of Carnaby Street and Ganton Street, 1965. Paul is wearing a shirt made from Liberty's Tana Lawn print (described as a small floral print previously used for children's clothes), his boots are from Anello & Davide.


IMAGE CREDITS & LINKS
All relevant Birdcage Boutique information and images sourced and scanned by Sweet Jane from Boutique―a '60s cultural phenomenon by Marnie Fogg, published by Mitchell Beazley, 2003. Except for the final photo of the Birdcage Boutique letterpress print block which is courtesy of SeaSunshine99 on Ebay. Additional location information regarding the Paul Smith photograph provided courtesy of Robert Orbach formerly of I Was Lord Kitchener's Valet. View the current collection of Liberty's classic Tana Lawn prints as worn by Paul Smith in the final photograph. Discover more about 'Hello, My Name Is Paul Smith'  a major exhibition celebrating the career of the designer which spans a forty year period―at The Design Museum from the 15th of November 2013-9th March 2014. Read 'Hello, My Name Is Paul Smith-Fashion And Other Stories' the accompanying book to the exhibition. View an example of original Northern Soul Oxford Bags made by Roxy Threads. Plus, an extremely rare example of an original dress from the Birdcage Boutique circa 1966. And finally, view an interview with Janet Campbell, owner of The Birdcage via the excellent 2016 BBC Documentary Series, Living in '66―Robert Lindsay Remembers, which I was pleased to contribute to here.