Posted by SWEET JANE at 04:25 4 comments: Links to this post

I was very pleased to hear that Native Funk & Flash by Alexandra Jacopetti and Jerry Wainwright, which was first published in 1974 is soon to be available again! It had been out of print for some time and subsequently became quite the collectors item amongst 1960s and 1970s counterculture enthusiasts, its reputation growing steadily over the past number of years as the occasional glimpse of the contents began to appear around the web, and also in various reference books about these decades...which of course sent the price soaring upwards as it became increasingly difficult to find an original print copy. The book itself is an amazing collection of contemporary folk art from the period, originating mainly from the San Francisco Bay area, compiled by the author from her personal point of view and beautifully photographed by Jerry Wainwright. Not only is it inspirational as a visual reference book, which would be beneficial to any fashion/textile designer or artist, but it is also an invaluable social document which defines the ethos of this incredibly creative period in American culture from within the epicentre of the scene. The newly revised edition which includes previously unseen photographs and updates on some of the artists is officially republished on the 5/7/2013. Further details can be found through the links at the end of the page. 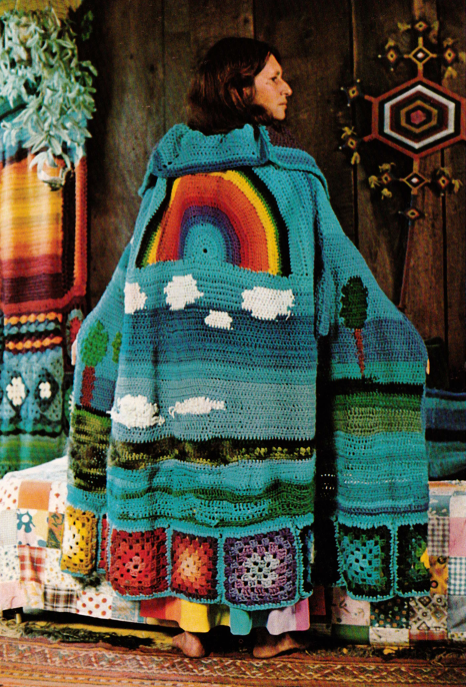 "Homage to Tomales Bay."  A crocheted cape by Judith Weston. 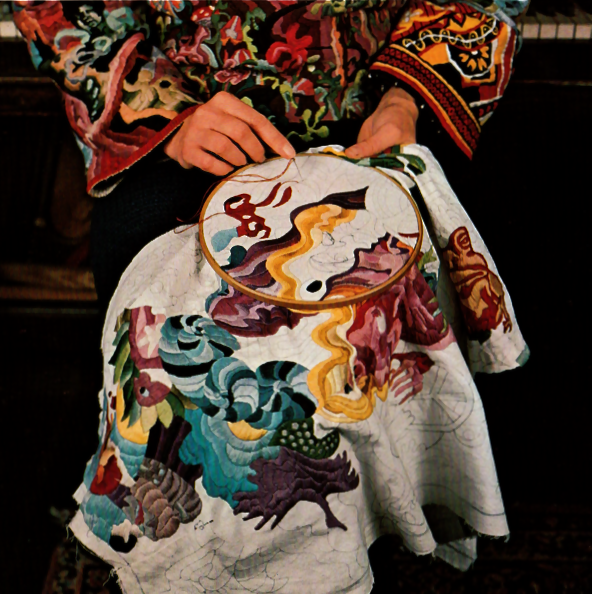 Work in progress―a skirt panel by Mary Ann Schildknecht, who was taught to embroider by nuns while she was serving a two-year jail sentence in Milan on a hashish smuggling charge. 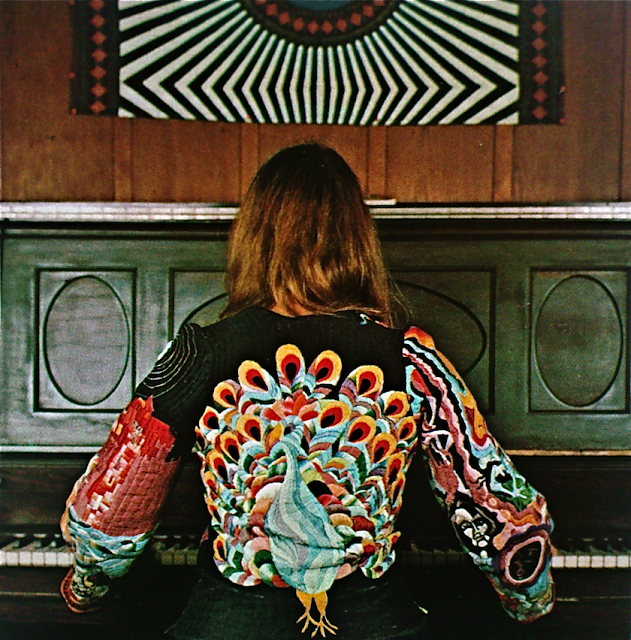 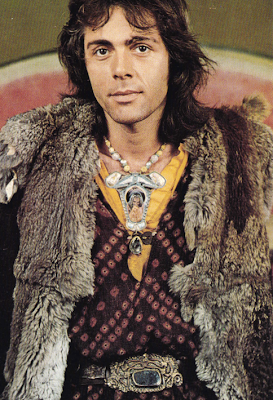 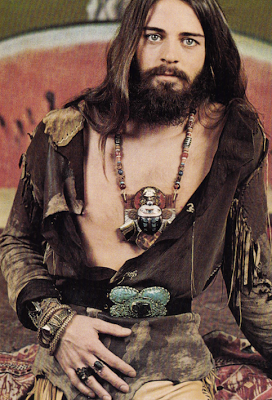 Jewelry designers Alejandro Maté and Lee Brooks who worked under the moniker of Alex & Lee, would eventually move beyond the emerging folk art scene into the mainstream fashion arena, while still maintaining the integrity of their original design concept. Their work was sold in Saks Fifth Avenue and also made the pages of  Harper's Bazaar. 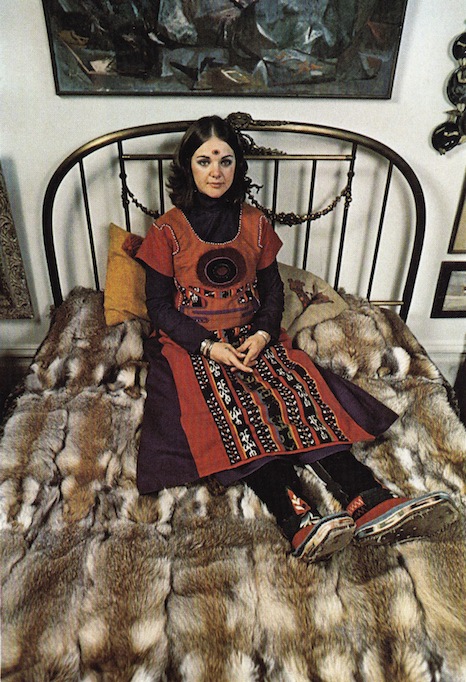 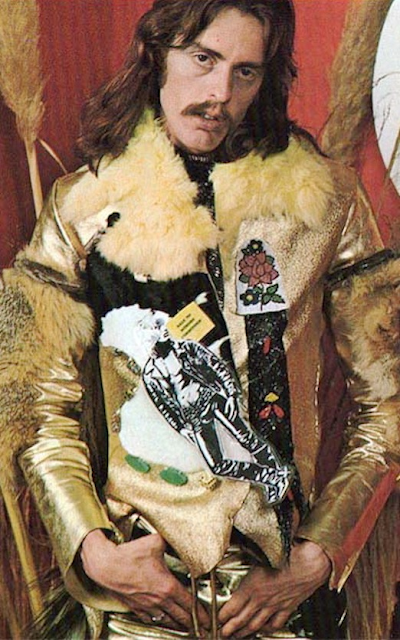 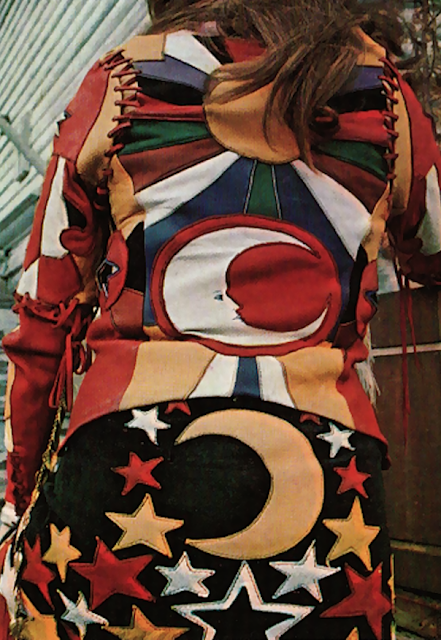 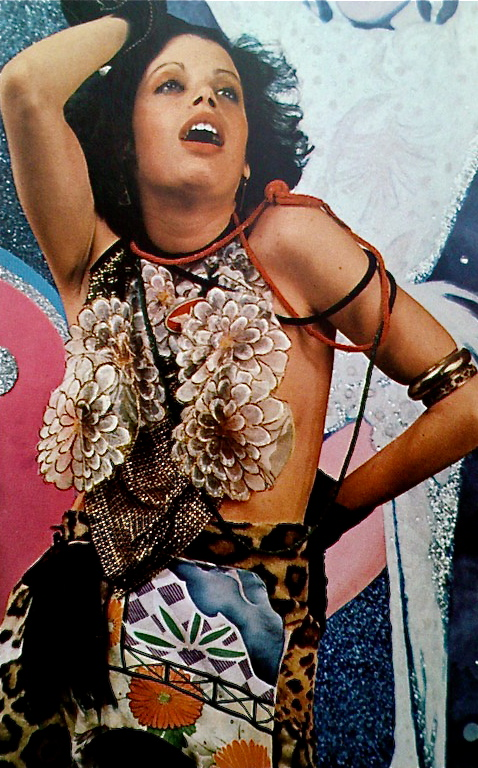 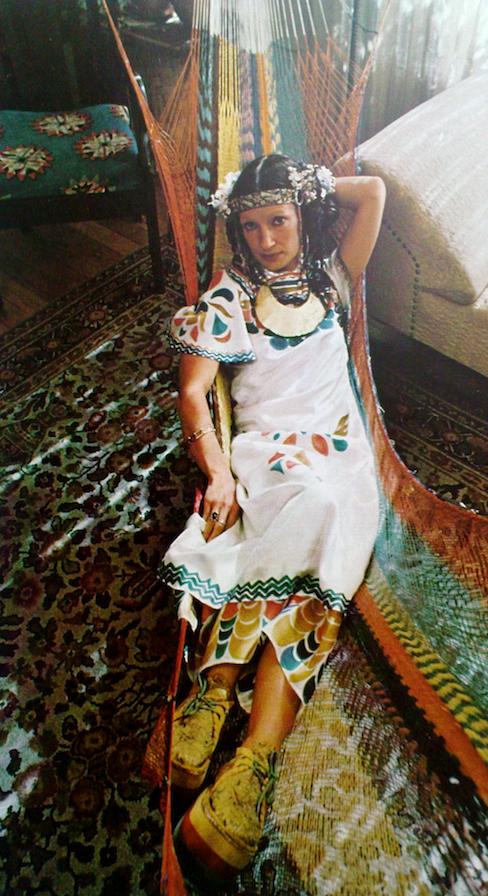 Hand painted silk dress by Penelope Fried. Shoes by Apple Cobbler (otherwise known as Mickey McGowan) who fashioned his boots, shoes and sandals from old fabrics, brocades, Chinese satins and canvas embellished with glass beads or embroidery and air brushed or photo-screened cottons. The soles were made of a coloured rubber similar to foam.

Posted by SWEET JANE at 06:43 No comments: Links to this post 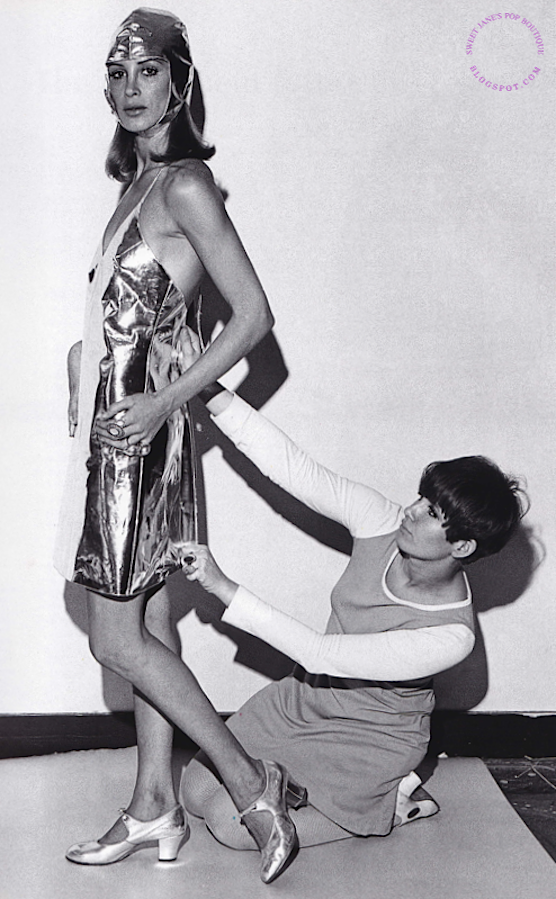 Designer Betsey Johnson fitting her mirror dress on spanish-born model Valma. The fabric, which was developed for Betsey by Coating Products Inc. of Englewood New Jersey, is a silvered chrome, laminated onto a soft canvas or flannel liner.  The dress ($35) from Paraphernalia, is accessorised with a silver helmet which snaps under the chin and chunky heeled tap shoes.

Posted by SWEET JANE at 06:45 No comments: Links to this post 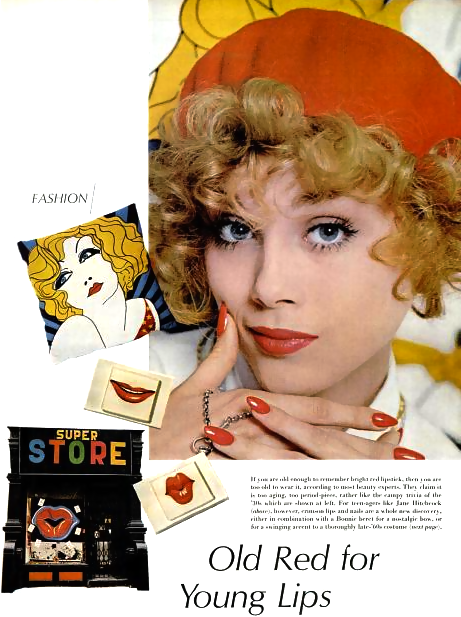 If you are old enough to remember bright red lipstick, then you are to old to wear it, according to most beauty experts. They claim it is too-ageing, too period-piece, rather like the campy trivia of the '30s which are shown at left. For teen-agers like Jane Hitchcock (above), however, crimson lips and nails are a whole new discovery, either in combination with a bonnie beret for a nostalgic bow, or for a swinging accent to a thoroughly late '60s costume. 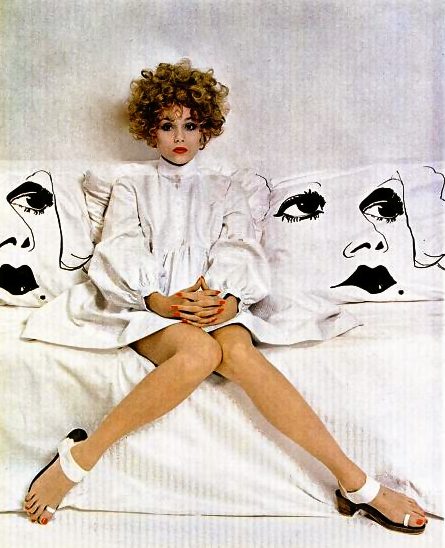 Jane, 15, updates lipstick and nail polish with a fuzzy hippie hairdo by Kenneth, a mini-smock (Gayle Kirkpatrick, $70) and "monster" thong sandals by Bernardo. She does not wear pencilled brow and heavy eyeshadow of Jean Harlow, whose face decorates pillows behind her.

IMAGE CREDITS
All images canned by Sweet Jane from LIFE Magazine, May 31st, 1968. All photographs by Greene-Eula.
Posted by SWEET JANE at 07:20 No comments: Links to this post 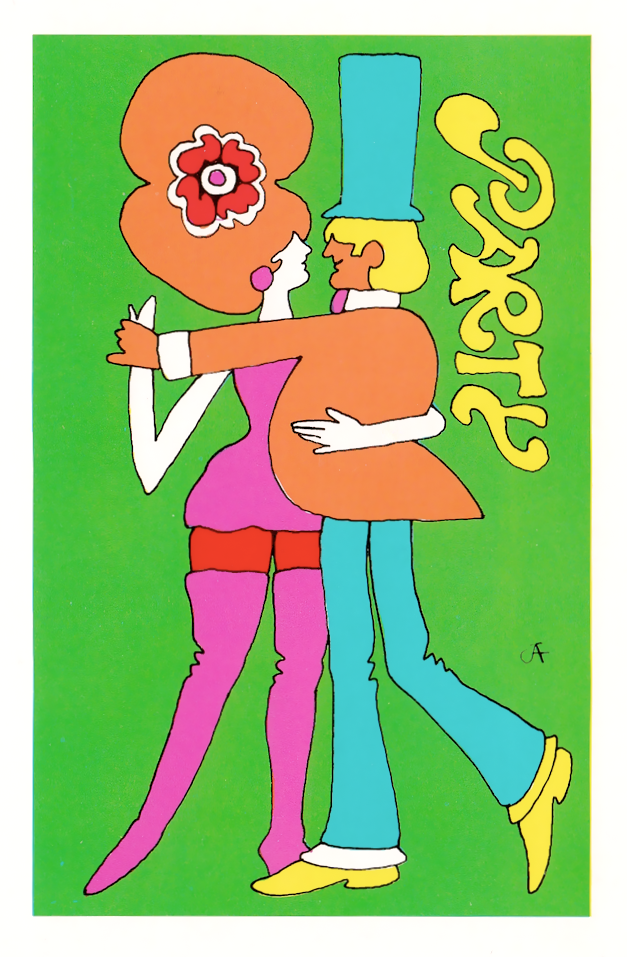 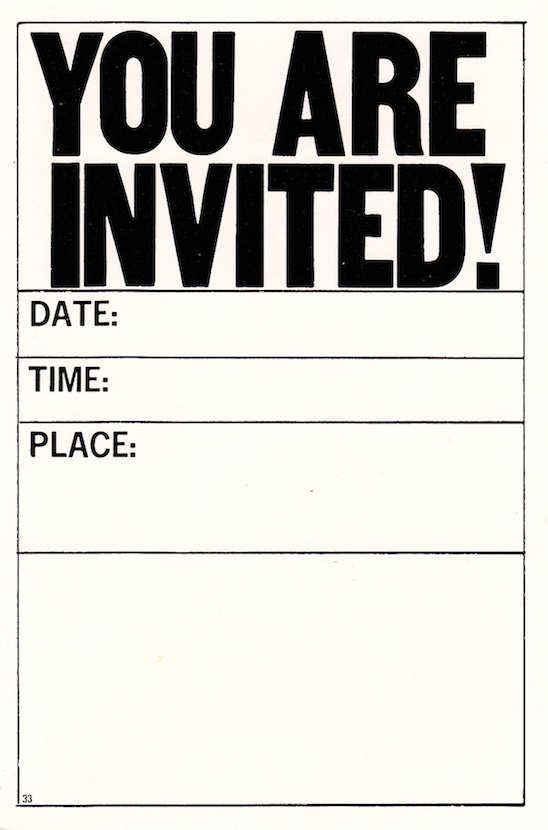 Image scanned by Sweet Jane from my personal collection of Party Invitation Cards, illustration by John Alcorn, published by Morgan Press Inc. You can view another example of his work from this period in one of my previous posts here.
Posted by SWEET JANE at 08:17 No comments: Links to this post 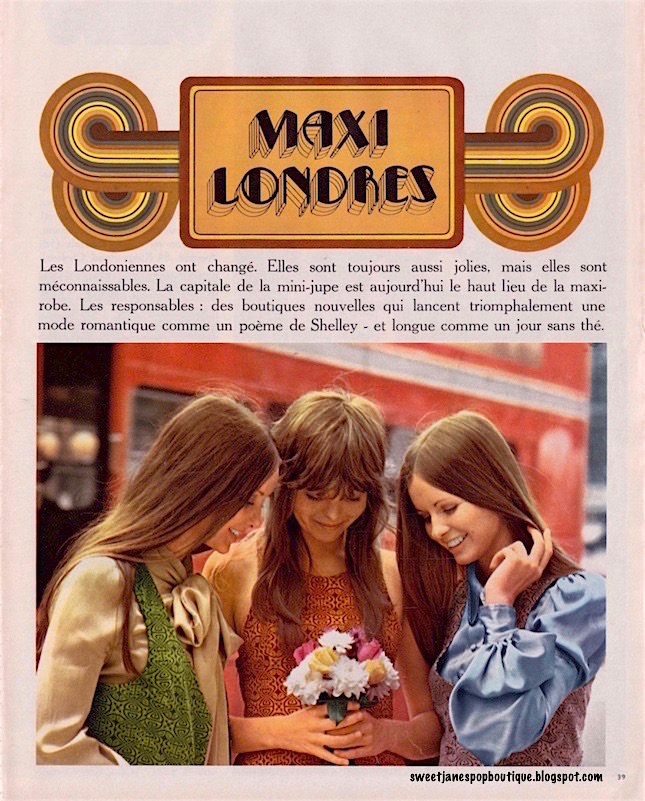 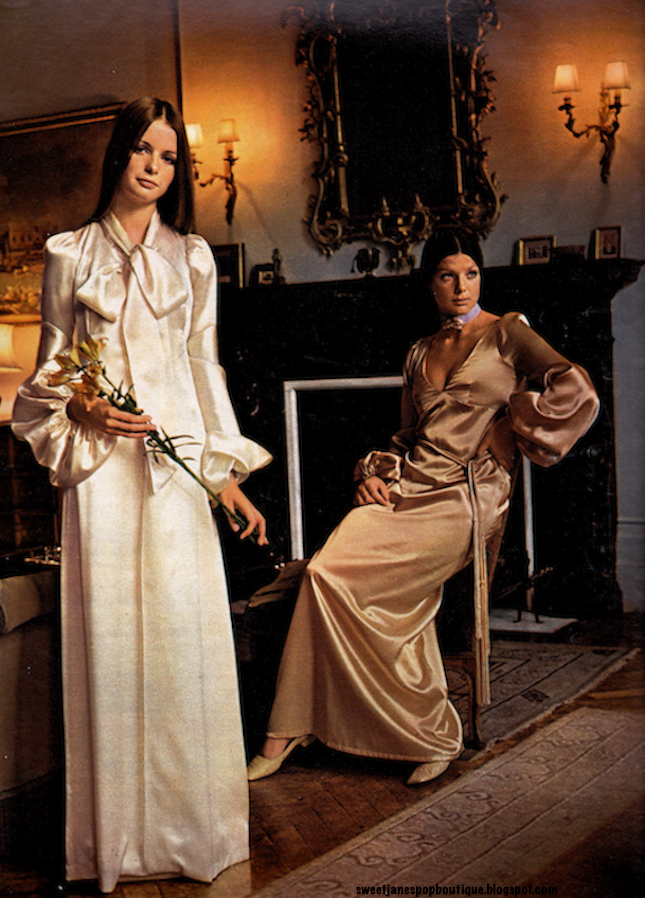 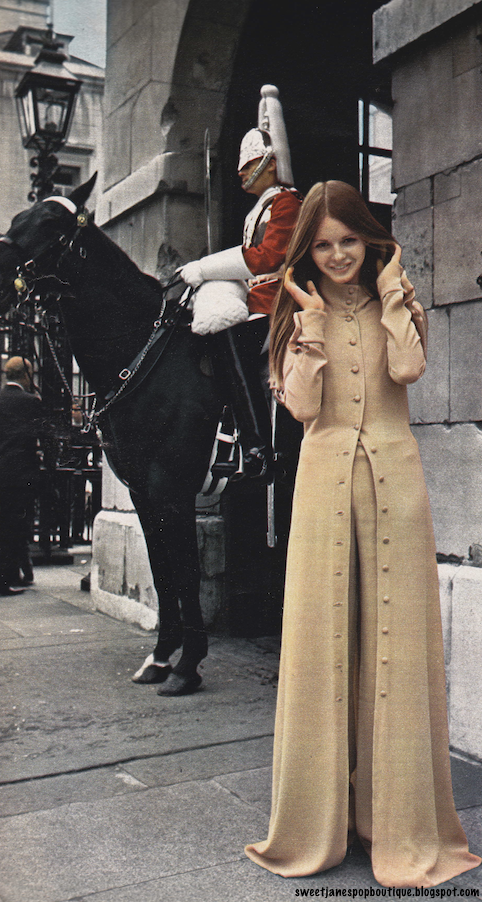 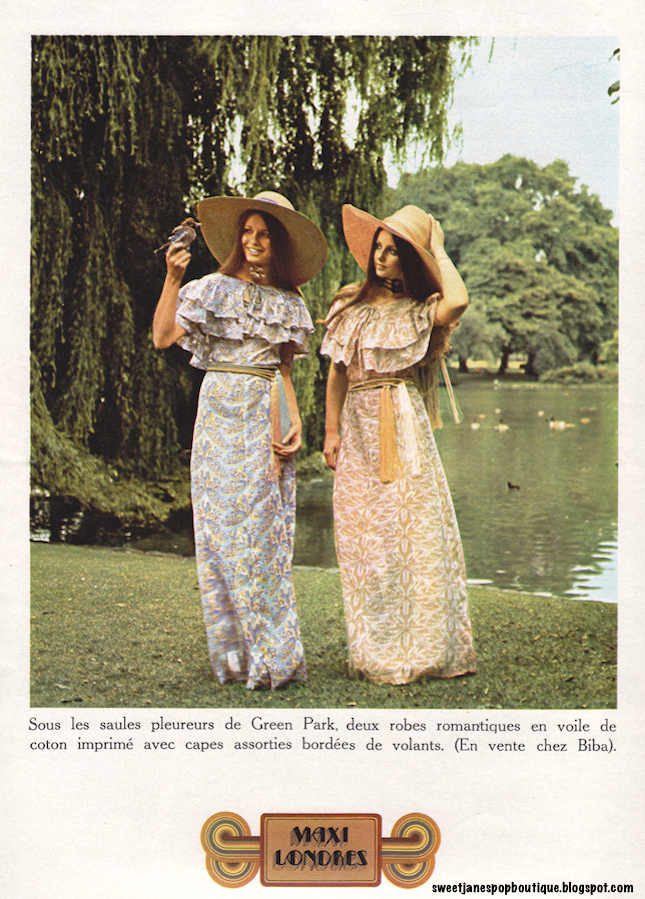 Posted by SWEET JANE at 11:45 2 comments: Links to this post


THE NAME IS THE GAMERUDI GERNREICH 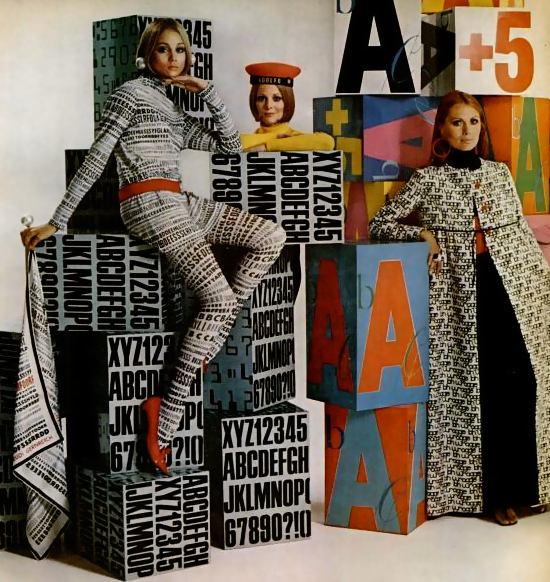 The Name Is the Game

Once, fashionable ladies kept their dressmakers' names secret but now they wear them on their heads, backs, and even toes. In the three outfits above - that photographer Bill Bell designed as props for an upcoming avant-garde movie called Recess - the name has become an integral part of the costume. The girl at left in Rudi Gernreich's jersey tunic and tights ($78) dangles scarf on which his name stands out in red. Adolfo's sailor beret ($65) bears his name on the band, and less anyone fail to get the message, the evening coat ($270) is imprinted with B.H Wragge's  name no less than 650 times. 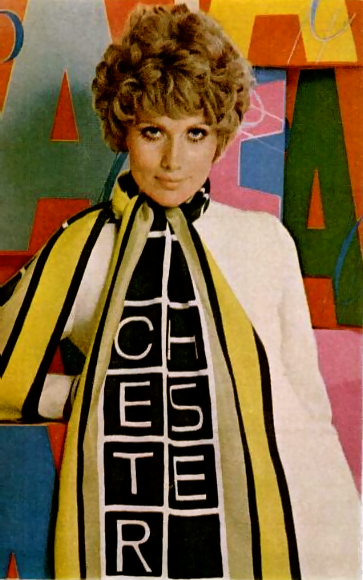 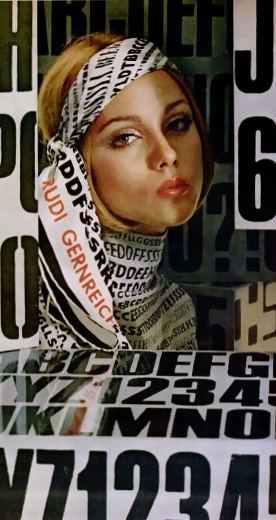 Scarf, draped gypsy-fashion on a girl's head (Glentex $12) contrasts designer's name, Rudi Gernreich, with the no-sense-making letters in the rest of the print pattern.