Some really great examples of John Kloss's geometric pop art inspired designs, I've put this post together from two separate publications which featured his work, as it was evident that both photographs originated from the same photo shoot by Henry Grossman. They were taken in the designer's apartment in May 1966, the canvas in the background is by pop artist Robert Indiana, a friend of Kloss, who like so many other creative types was also a resident at the Coenties Slip building in Lower Manhattan at the time. Kloss had originally studied architecture in his native city of Detroit before moving to New York, he then turned his attention towards fashion design, and after graduating from the Traphagen School of Fashion he moved to Paris, where he apprenticed with couturier Bob Bugnand (1957-58) and also with Serge Matta. In 1959 he declined an offer to work with the long established firm of Nina Ricci, opting instead to design with Lisa Fonssagrieves, former top fashion model and wife of the photographer Irving Penn, who had launched her own design label a couple of years earlier. He eventually established his own successful business in the early 1960s, the influence of the pop art movement from this period abounded in his work to great effect, so much so, that when Yves Saint Laurent launched his Mondrian inspired collection in 1965, the New York Times claimed that Kloss had achieved the same result two years previously. Kloss also specialized in lingerie design for which he received two Coty American Fashion Critics Awards in 1971 and 1974. You can view some more examples of the designer's work via the links at the end of this post. 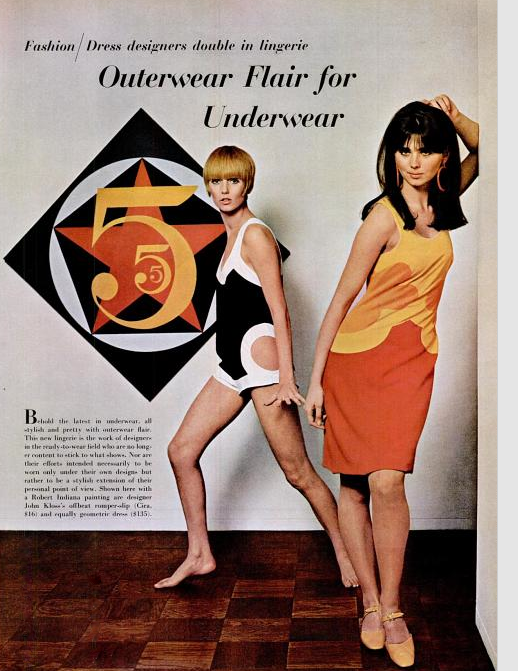 Behold the latest in underwear, all stylish and pretty with outer-wear flair. This new lingerie is the work of designers in the ready-to-wear field who are no longer content to stick to what shows. Nor are their effects intended necessarily to be worn only under their own designs but rather to be a stylish extension of their personal point of view. Shown here with a Robert Indiana painting are designer John Kloss's off-beat Romper-slip (Cira $16) and equally geometric dress ($135). 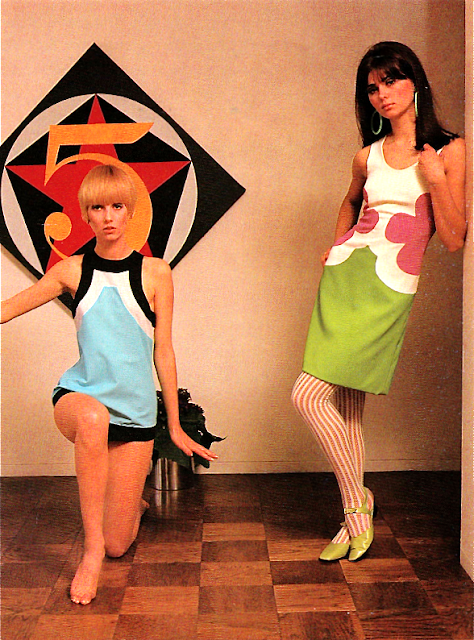 
IMAGE CREDITS &  LINKS
All images scanned by Sweet Jane from Radical Rags Fashions Of The Sixties by Joel Lobenthal and LIFE Magazine May 6th 1966. All photographs by Henry Grossman. Models Ulla Bomser and Colleen Corby. Another fantastic example of a John Kloss pop design dress owned by fashion journalist Marit Allen which was featured in a double-page British Vogue article also published in  May 1966 can be found over on the V&A Collection. The Metropolitan Museum of Art also have a wonderful selection of his work from this period in their archive. A biography of the artist Robert Indiana and a catalogue of his work and more on the official Robert Indiana website. A conversation with the super model, photographer and sculptor  Lisa Fonssagrives-Penn by David Seidner on the excellent Bomb Magazine - publishing conversations between artists of all disciplines since 1981. And you can view some of my other posts about pop fashion here ➽ Pop Style (1965); Multiplex Minis by Peter Max (1970); The Picture of Fashion (1972); Mr Freedom: Kensington Church Street (1971). And finally, Pop Fashion (1971).