Above, Peter Blake's portrait of restaurateur Michael Chow commissioned for the interior of Mr Chow's―the fashionable Knightsbridge restaurant which celebrated London's melting pot of internationalism in the 1960s. Chow is depicted sitting in a managerial-like pose between two wrestlers, namely Frisco and Lorenzo Wong―a play on the fact that his concept for the new restaurant was to introduce authentic Beijing cuisine to the British public by integrating it with various aspects of other cultural identities.

Beginning with a menu that the British could easily understand―the food was cooked by Chinese chefs, and then served by Italian waiters, in an extremely chic European-style environment. The combination of all of these forward-thinking global elements has continued to contribute to the establishment's success since it first opened its doors on St. Valentine's Day 1968. It instantly became a mecca for celebrity diners such as The Rolling Stones, The Beatles, Federico Fellini and Jeanne Moreau. The walls were decorated not only by Blake's portrait of the owner but also by the original works of many other notable artists including David Hockney, Allen Jones and Jim Dine etc, several of which were initially traded in exchange for free meals at the premises, most definitely an offer that any so-called 'starving artist' couldn't refuse!

In the true spirit of entrepreneurialism, Michael Chow recognised exactly the right moment to expand the business, so the essence of Mr Chow's success in swinging London, eventually transported another version of itself to the next hotspot on the planet, which in 1974 was Beverly Hills, and along with it came a new set of Hollywood celebrity patrons. In 1979 the business expanded yet again, this time to Midtown New York. Once again, the establishment was frequented by well-known local artists and musicians. Andy Warhol, Jean-Michel Basquiat and the photographer Robert Mapplethorpe were all regulars, it was also the place where John Lennon had his last meal before the fateful event which transpired later that evening upon his return home to The Dakota on December 8th 1980. And in the future, several more Mr Chow restaurants in equally prime locations would follow suit. 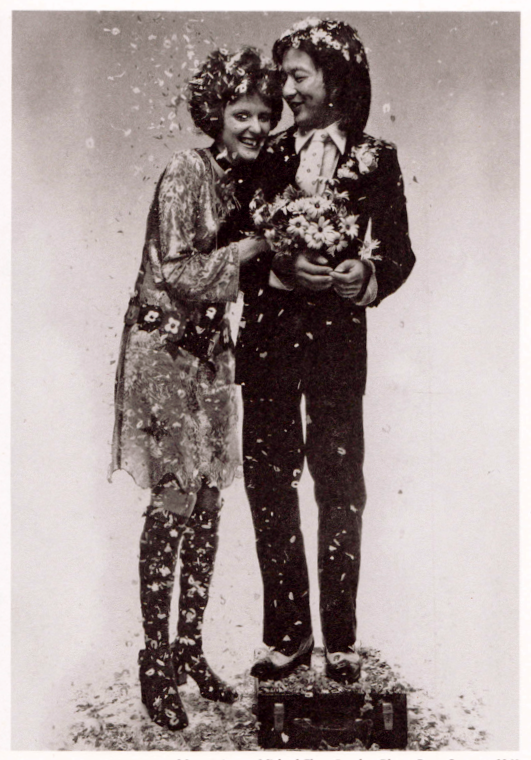 Michael Chow on his wedding day with his new bride Grace Coddington. Grace is wearing an apple green, Devore silk velvet dress, scalloped below the knee, appliqued with wild rose and accessorised with a daisy chain belt of brown and cream suede around the hips, designed by Laura Jamieson of The Sweet Shop,  29 Blantyre Street, Chelsea S.W. 10 (1969).


Michael Chow, however, is much more than a restaurateur, he is a man of many achievements and also quite the dandy. Born in Shanghai in 1939, the son of talented, wealthy parents, his mother was an heiress whose family had made their fortune as tea merchants, and his father Zhou Xinfang was the country's most famous actor of his generation, a leading figure at the Peking Opera and founder of the Qi School of performance. He was sent to Britain to be educated at the tender age of 13, where he was immediately dispatched to Wenlock Edge, a boarding school located in Shropshire. After an understandably difficult transitional period, the young Michael Chow eventually found his way, quickly realising that aesthetics could play an important part in shaping his future and how he wanted to be perceived. And so, he developed a slightly eccentric but very stylish look, which he felt helped him to bridge the cultural divide, while still remaining intrinsically faithful to his Chinese heritage.

Upon leaving Wenlock Edge, he enrolled as a student at St Martins School of Art, immersing himself in London's nightlife in his free time. Chow also went on to study architecture, which he put to good use further down the line when designing his various restaurants. He spent a period of time working for the Robert Fraser Art Gallery, and later opened a hair salon 'Smith and Hawes' on Sloane Avenue with his business partner Robin Sutherland, which they subsequently sold to Leonard of Grosvenor Square―it then became known as Leonard and Twiggy.

Amidst all of this activity, he managed to find the time to fall in love and marry on more than one occasion, became a renowned art collector, and to date, following in his father's theatrical footsteps, has also appeared in approximately 18 films. Some of the best known from this particular period are actually on my personal favourites list, beginning with Modesty Blaise (1966) as Weng; You Only Live Twice (1967) as Spectre #4 alongside his sister―Bond Girl actress Tsai Chin; The Touchables (1968) as Denzil; and lastly, Joanna (1968) in the role of Lefty. Sadly, Michael would never see his parents or his brothers again, as they had remained in China during the cultural revolution―with tragic results. But it is obvious that his life and his career are a testament and celebration of all that was magnificent about them and his country of origin.

IMAGE CREDIT & LINKS
All Images scanned by Sweet Jane from Radical Rags Fashions Of The Sixties by Joel Lobenthal (the Original Artwork by Peter Blake published in the book courtesy of the private collection of Michael Chow). Photograph of Grace Coddington and Michael Chow scanned from Grace: A Memoir, by Grace Coddington. Photograph by Barry Lategan 1969.