A fantastic fashion feature originally published in 1967, which pays homage to those who were determined to step out in true 'peacock style' regardless of the general conformity in menswear which still surrounded them at this time―even though the revolution in men's fashion was well underway. The original article is in French, however, I shall refrain from doing the language any disservice by attempting to translate the introduction and particularly any of the quotes from Baudelaire or François de La Rochefoucauld into english via Google Translate. Thankfully, the photographs are strong enough to speak for themselves, there are definitely some superb examples of dandy finery on display here! 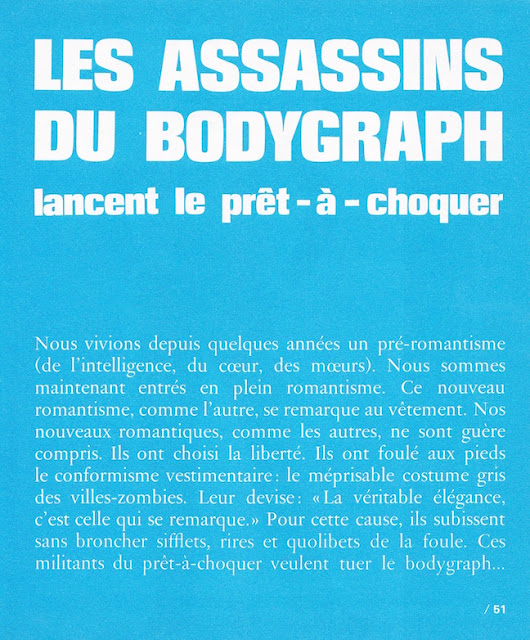 IMAGE CREDITS & LINKS
All content scanned by Sweet Jane from an original fashion feature in PLEXUS, Issue No.9, 1967. All Photographs by  Chantal Wolf. You'll find more examples of Dandy Fashion and Peacock Style from the period in some of my previous posts as follow: The Swinging Revolution (1966), Jess Down - English Boy ltd Model & Artist (1969), Male Plumage (1968), Mr Fish of Clifford St (1968) and New Plumes in the Peacock's Tail (1968).