Back To Brighton | An Interview With Barbara Hulanicki


Back To Brighton
An Interview With Barbara Hulanicki

I'm very pleased to feature yet another fantastic interview with legendary Biba founder Barbara Hulanicki here on the Sweet Jane blog, courtesy of the lovely folk over at Visit Brighton. Jo-ann Fortune, editor of Vintage Brighton conducted this charming and insightful short documentary during Barbara's recent return to the city―in which she had spent her formative years as a teenager in the 1950s. She discusses her time studying fashion design and illustration at the Brighton School of Art, her winning design in an Evening Standard Fashion Competition in 1955, the early Biba years and her opinions on contemporary fashion. It also gives the viewer a tantalising behind the scenes glimpse of some of the amazing items included in the forthcoming Biba and Beyond Exhibition which opens at The Brighton Museum and Art Gallery on the 22nd of September 2012. Further information about the exhibition can be found on the Visit Brighton website. 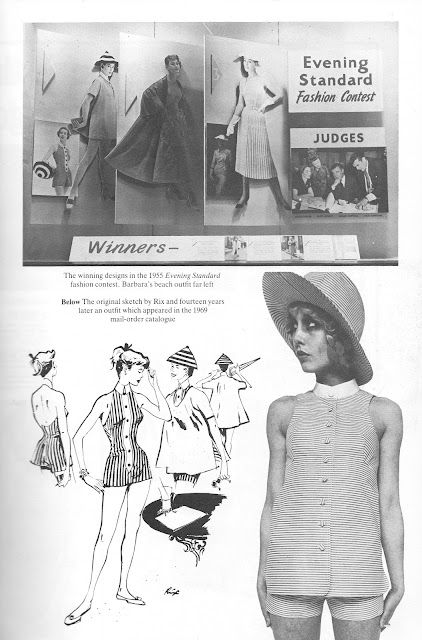 Above: Barbara's winning beach wear design as it appeared in the Evening Standard newspaper competition seen here in the illustration on the left and also in the photograph above it. The final design was made to measure by Hartnell of London and didn't quite turn out as she had intended due to the fact that they had replaced her choice of fabric with a stiff striped taffeta. According to Barbara, the polished cotton which she had chosen seemed to be taboo in couture circles. However, 14 years later Barbara revisited the inspiration behind her original design and produced the beautiful beach wear garment seen on the right, modelled by Elizabeth Bjorn Neilson for a Biba summer catalogue.


The following items are just a brief glimpse of what you can expect to see at Biba and Beyond this September. Two thirds of the exhibition will be devoted to the story of Barbara Hulanicki and Biba, with the final third concentrating on Barbara's career from the late 1970s to the present day. 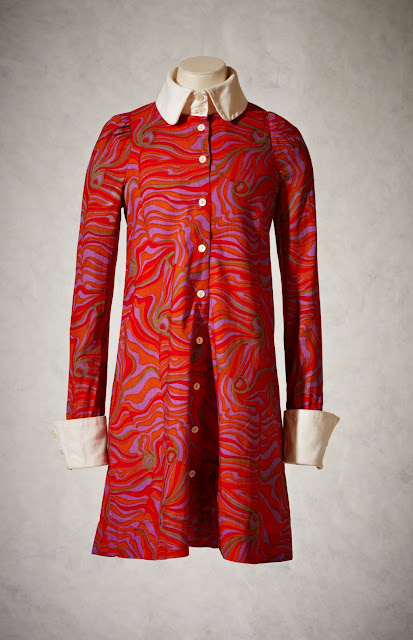 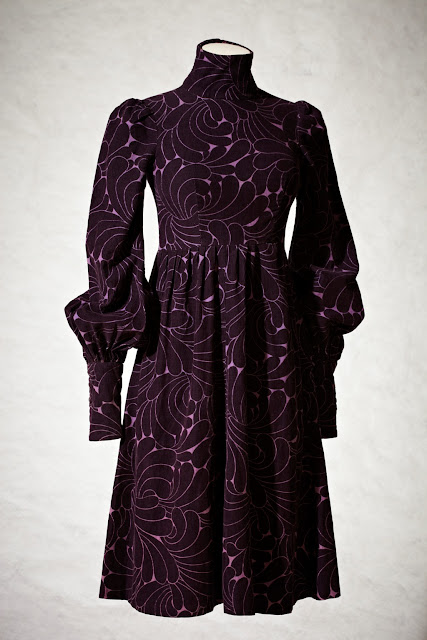 The print on this dress is known as the banana print. It first featured on Biba wallpapers which were sold in the Kensington High Street shop (1969-1973). The print has since become a Barbara Hulanicki classic and has featured most recently in 2006  on a wallpaper for Habitat. 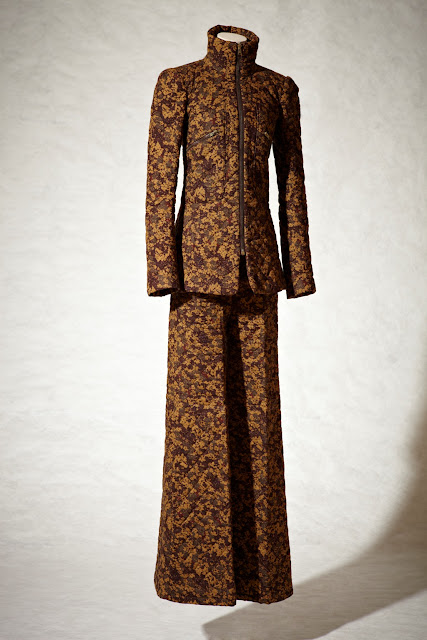 This trouser suit is made from printed cotton with a floral spring design in camouflage colours. The cotton for both the jacket and trousers has been padded with quilting. 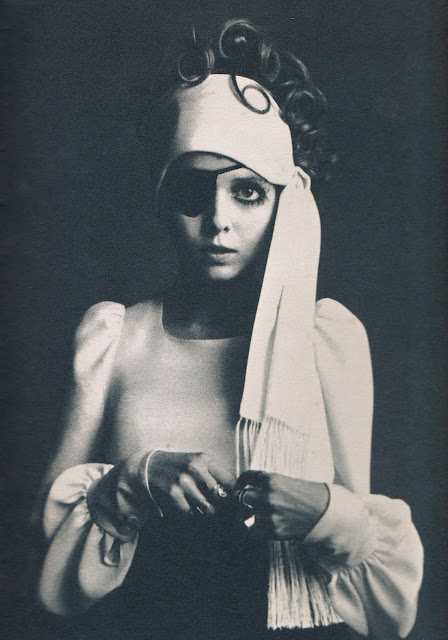 As a long time admirer of Biba, I was absolutely delighted to have recently been chosen as one of  a group of seven lucky bloggers who were given the opportunity by 'Visit Brighton' to be included in a filmed Q&A interview with Barbara Hulanicki, designer and founder of the iconic Biba label―as part of a series of publicity videos to promote the forthcoming Biba and Beyond Exhibition which opens there next month. This opportunity came totally out of the blue, and time was of the essence as I set about thinking of the question that I wanted to ask her! It's not everyday that you get the chance to ask your favourite designer a question after all, so needless to say there was a sleepless night or two involved in the proceedings, which included re-reading Barbara's autobiography and quite possibly every other interview that she has ever given. This wasn't necessarily due to the fact that I couldn't think of a question to ask her, it was quite the opposite...I had way too many questions! And trying to narrow it down to just one (and also to one that she hasn't been asked previously) seemed like an almost impossible task! So, at the the eleventh hour I called in the troops, namely my sister Dandelion, who, being as obsessed with all things Biba related as I am myself, subsequently gave me a list of another twenty alternative questions which she herself wanted to ask (thanks sis!). We eventually came to the conclusion that we would probably need to invite Barbara around for tea everyday for a week to get through all of them, but what a way to spend a week!

Anyway, after much agonising, the question was submitted, and the Biba fever in the Sweet Jane household finally subsided. But as it turned out, due to unforeseen circumstances it couldn't be used, so it wasn't quite my first choice which made its way to Barbara in the end, however, the alternative choice ties in really nicely with the exhibition archive. And the question is "Which piece from the Biba Archive brings back the strongest memories for you?". The item described in her answer sounds amazing and I would dearly love to see the dress which she is referring to. And hopefully I will, when I visit the Biba and Beyond Exhibition which opens at The Brighton Museum and Art Gallery on the 22nd of September 2012 and runs until 14th of April 2013. By all accounts this is shaping up to be a truly fantastic exhibition with over 200 items alone on view from the private collection of Angela Smith of Victoria and Albert Vintage Clothing, as well as many more contributions from various other sources. I would like to thank Visit Brighton and Jo-ann from Vintage Brighton for this wonderful opportunity, Barbara for taking the time out of her busy schedule to be interviewed and of course for giving us Biba in the first place. Further information about the Biba and Beyond Exhibition can be found on the Brighton Museum & Art Gallery website or at Visit Brighton, and you can view some of my previous Biba posts here or by clicking on any of the labels at the end of this one. 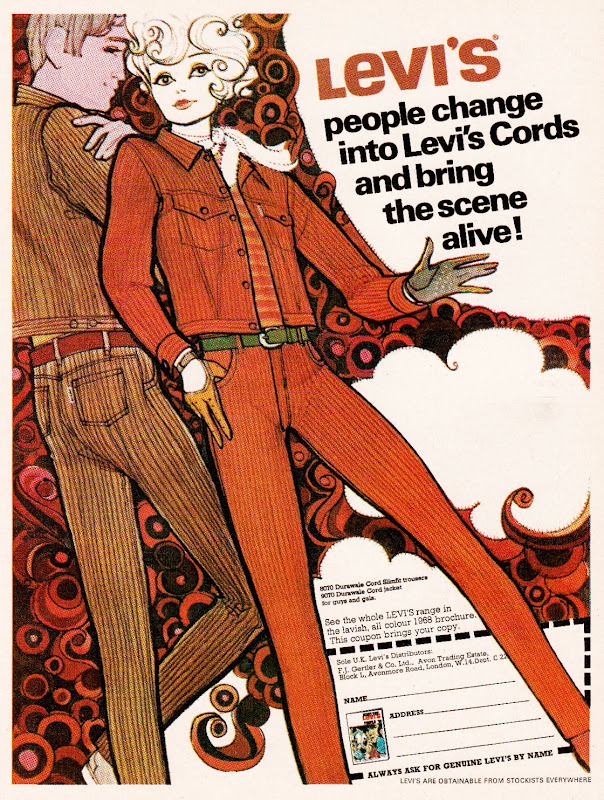