The Afghan coat made its debut appearance on to the London fashion scene in 1966 as the swinging city began to turn its attention towards the Far East and all things of Asian influence. Some of the first coats were imported by Craig Sams, who then sold them on to various boutiques such as Hung On You in Cale Street and Granny Takes a Trip on the Kings Road, where, the popularity of the coats soared overnight after the Beatles had been photographed wearing their recent Afghan coat purchases from the aforementioned shop. 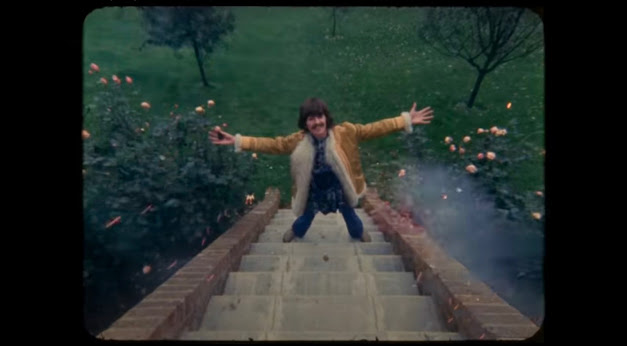 George Harrison wearing an Afghan coat during the Blue Jay Way sequence in the Beatles' Magical Mystery Tour film, in 1967.

The original imports from the Ghazni province which is situated between Kabul and Kandahar, were incredibly beautiful, and elaborately decorated with hand-embroidery by the local artisans. However, as demand increased globally, they could not keep up a steady supply and quickly-made crude imitations from other areas began to flood the market...and these were the ones which gave the Afghan coat its undeserved bad reputation, mainly due to the fact that the skins had not been cured properly. This in turn apparently caused the coats to permeate the air around them with an extremely undesirable odour—especially after the wearer had been caught out in the rain, and more often than not it was combined with the added aroma of Patchouli oil favoured by hippies, which to this day, seems to linger on in the memory of anyone who was unfortunate enough to be in close proximity to someone wearing one. 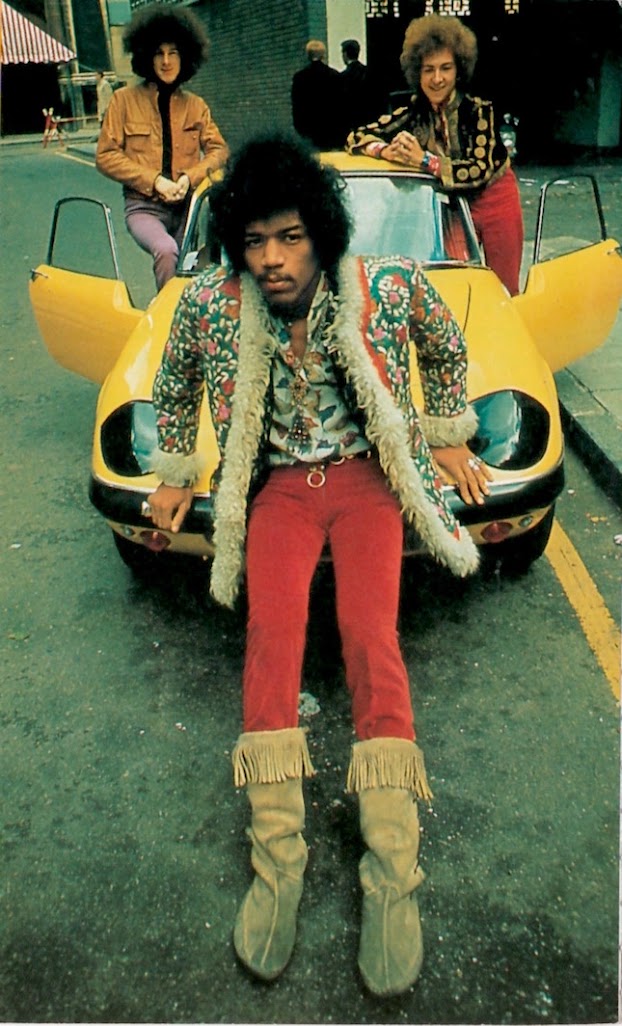 Having said that, regardless of the odour, they continued on to become more than just a fleeting trend. And even though their general popularity is now long gone, they have left an indelible mark 0n fashion history and will forever be associated as an integral part of the iconic look of the hippie movement of the 1960s and 1970s. I can't say for definite when their reign as a popular item of clothing officially began to decline, without a doubt the advent of Glam Rock followed by the emerging Punk Scene pretty much killed them off from the mainstream, but I'm sure that there were still a few hippies happily wearing their Afghan coats until the end of the seventies. Apart from a very brief entry on Wikipedia, I couldn't find any other relevant information online up to this point in 2012, there's very little out there. So, I have included several photographs in this post to give you some idea of the timeline which demonstrates their continued popularity as a fashion item/fashion statement garment over a six-year period, from their initial introduction in 1966 through to 1971.

It's also interesting to note that they seem to have been favoured as suitable wedding attire by the male peacock pop stars of the era, with both David Bowie and Eric Burdon choosing to wear Afghan coats on the 'big day'. With the exceptions of the Jimi Hendrix example above, plus the coats and jackets in the 1968 Eye Magazine feature below, I haven't found very many other colour photographs in my personal collection of books or magazines so far, but I'll take another look when I get more time and add them in due course. In the meantime, I've photographed my own Afghan coat which I purchased in the mid 1990s, I haven't worn it in a long time but still can't bear to part with it, it's a really lovely one, in great condition too considering its age..and it is most definitely not afflicted with the curse of the aforementioned Afghan coat odour, otherwise it would have been offered up as a candidate to the gods of room 101 long ago.

"You have been in Afghanistan, I perceive," said Holmes to Watson..By intricate process of deduction, Sherlock Holmes laid claim to this note-worthy fact about Dr. Watson the first time the two met. Dr Watson later recorded in his journal that he was astonished by Holmes' perception. He need not have been. Besides his tropic tan, haggard face, injured left arm, and military-medic air, all of which Holmes claimed were dead give-aways, Watson probably was wearing an Afghan coat. (Holmes' whole train of thought didn't take more than a minute which is very suspicious if Watson wasn't wearing a coat). Today, one need not sojourn in Afghanistan to possess an Afghan coat. Without risking a haggard face or injured arm, you can find an authentic assortment in this country. Afghan coats are richly embroidered on the sheepskin side : the fur is worn on the inside. (Eye Magazine - August, 1968), 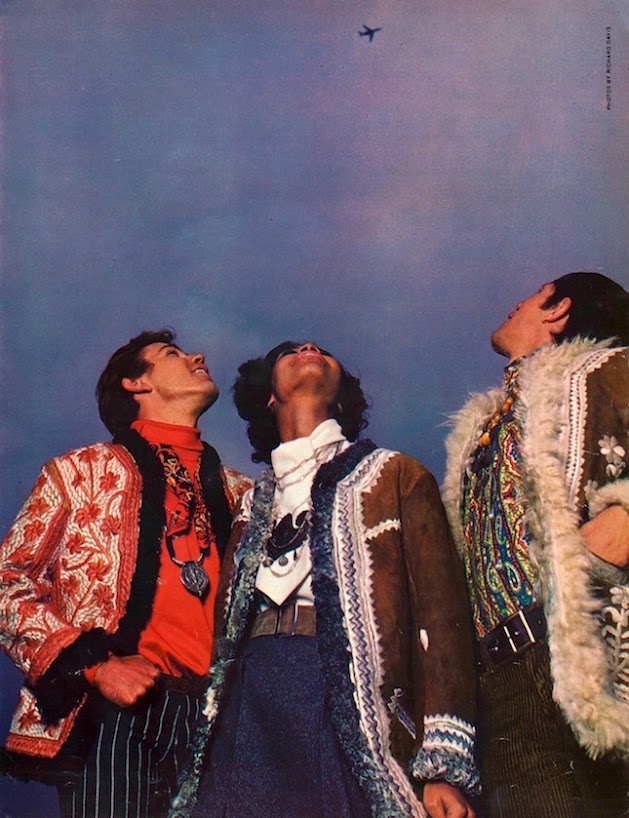 Above: All from Mallory. Coats, $215; jacket $145. Left to right, under the coats: Peter's turtleneck, Himalaya $17; striped jeans, $7, Brick Shed House, NYC. Handcraft scarf. Candy's skirt, $35, Mallory; Crepe blouse, also Mallory, $35. Boots, Golo. Jim's paisley shirt, Michael Webb for Carlyle, $10; corduroy pants, $7, Limbo, NYC. All jewelry, Odyssey Shop, NYC. (Photograph by Richard Davis. 1968).
I had a quick look at the figures for the median/mean income of the average unmarried male in the United States circa 1968, and according to the census source for this period, it worked out somewhere between $7,132 and $8,185 per annum. So, these particular jackets as featured in Eye magazine were definitely not cheap throwaway fashion items, when you consider that they cost over a weeks wage!

The Afghan Coat
arrives in London! 1966


Of all the great post comments that I have received on the Sweet Jane blog over the years, the following one from Craig Sams remains my absolute favourite:   I had visited Kabul in April of 1965, where I first saw the Afghan coats, but couldn't afford to buy one as I was travelling on a shoestring. In October of 1966 I imported a batch to London and showed them to various boutiques, including Granny Takes a Trip, Dandie Fashions, Hung on You and Clouds Have Faces. Granny Takes a Trip took a wide selection and I got a phone call from John Pearse, one of the owners (who now has a very cool fashion boutique in Meard Street in Soho, London). "I hope you've got plenty of those Afghan coats in stock, Craig, because the Beatles have just gone out the door of our shop wearing them." I ordered more but I was also in the throes of getting my macrobiotic restaurant open and was trying to concentrate on one business at a time. Most of the pictures of the Beatles were in black and white so nobody could really appreciate the detail of quality in both the color, the curing of the skins and the extremely fine silk thread embroidery. Within a few weeks no sheep between Istanbul and Kabul was safe - suddenly they were worth more for their skins than for their meat as people hastily killed them, skinned them, did machine stitched embroidery or quick hand stitching and rushed them to the UK and other countries where the market was booming. 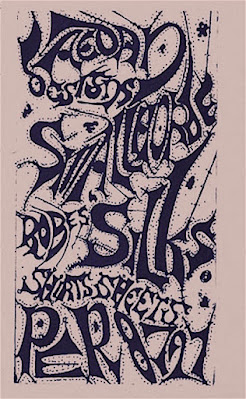 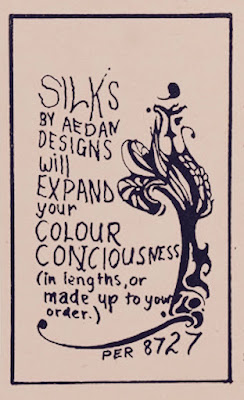 Print Adverts for Silks by Aedan Designs
The International Times, June, 1967.
I also imported kaftans from Tunisia, shoulder bags and Khamba boots from the Tibetan refugees at Dharamsala India and silk from China that a designer called Aedan Kelly would dye in blobby psychedelic patterns. We sold a lot of patterned silk to Dandie Fashions, who made them up into men's shirts. Once my restaurant kicked off I was busy 24/7 and that was then end of my career in ethnic fashion, except that I now had a reputation for being able to get ethnic stuff. Michael Rainey of Hung on You asked me to get him Russian Army uniforms - the idea was that peaceful coexistence would be stimulated by people wearing uniforms of the enemy (this was the Cold War, remember). I met the military attaché at the Russian Embassy in Kensington Palace Gardens and he thought it was a great idea. He had to check with his superiors in Moscow, though. A firm 'nyet' came back from Moscow and that was that. You can't fight City Hall...or the Kremlin. (Craig Sams, The Sweet Jane blog, December 2012).