I'm so pleased to have finally acquired a copy of this extremely rare issue of The Daily Telegraph Magazine. The cover girl is Marianne Faithfull, and the cover image―painted in comic-strip style, was designed as a mail-order poster for the supplement by British pop artist Peter Blake, who took his inspiration for Marianne's character from the Arthurian legend of Morgan Le Fay―come on her dragon to bring life to a desolate Britain.

Blake created the poster by painting upon a photograph of Marianne taken by Hans Feurer, and was assisted on the project by his then wife, the incredibly talented sculptress Jann Haworth, who made the dragon―decorating it in fairground colours and also created the sorceress costume that Marianne is wearing. The finished result which measured 20'' x 30'' was issued for sale through the magazine via mail-order for the bargain price of  3s 6d. in April of 1968, just prior to the initial release of Marianne's appearance in The Girl on the Motorcycle, in which she starred alongside Alain Delon. I wonder how many of these posters they printed...and also how many they actually sold...and mostly, I wonder where are they all now?, because I don't recall ever seeing any. One thing's for sure...mail-order coupons sure ain't what they used to be! 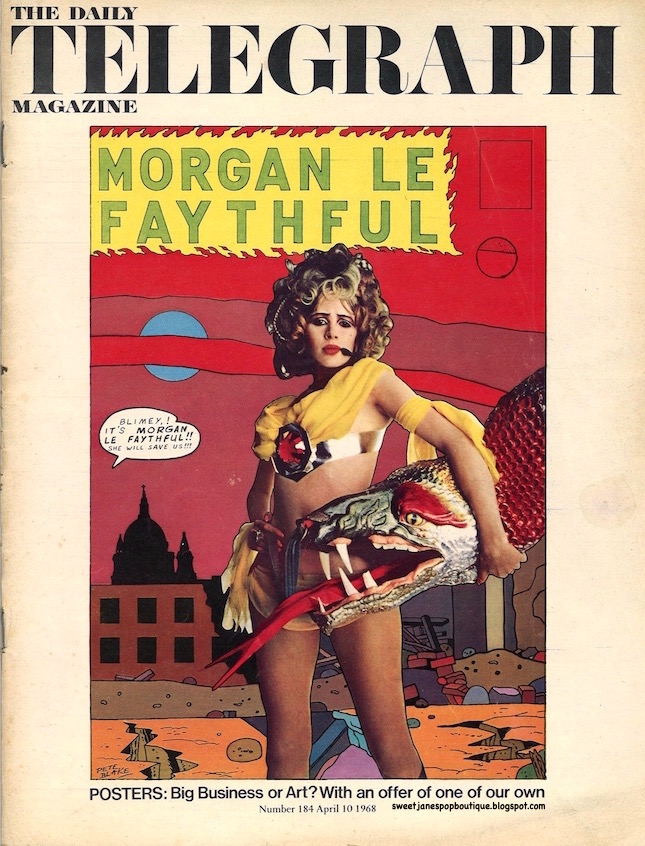 Peter Blake's 'Morgan Le Faythful' pop art poster of Marianne Faithfull painted in comic-strip style, showing Marianne as a modern version of Morgan Le Fay of Arthurian legend―come on her dragon to bring life to a desolate Britain, as it appeared on the cover of  The Daily Telegraph Magazine, April 10th, 1968. 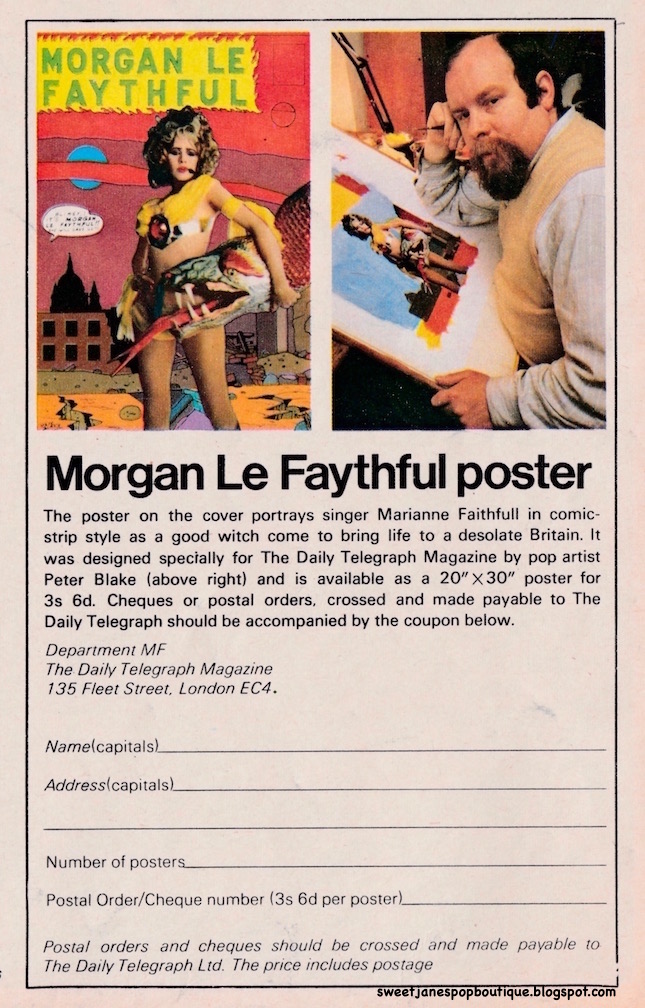 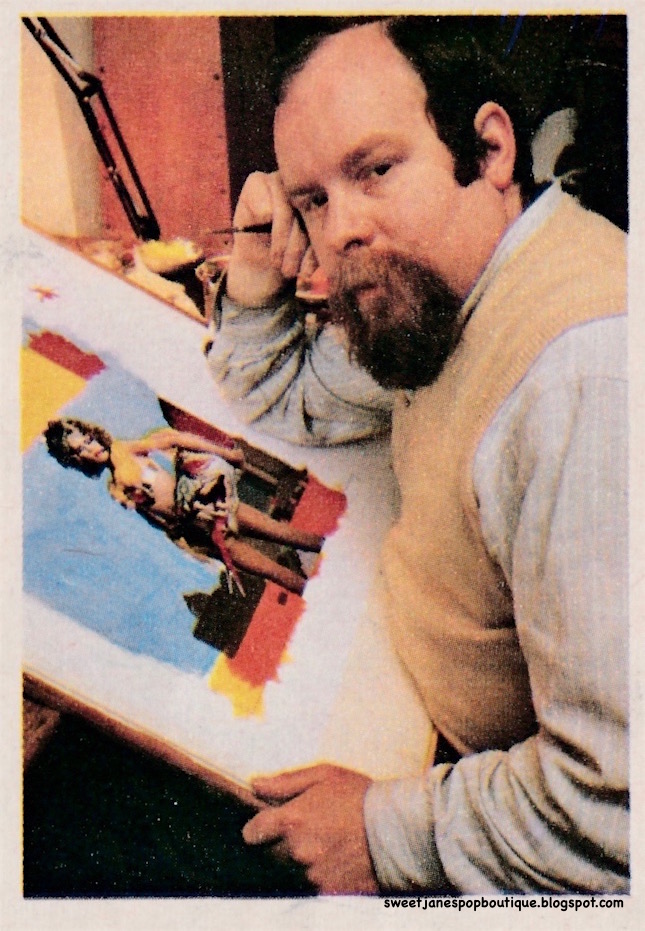 The artist at work―Peter Blake photographed while creating the Morgan Le Faythful poster (1968). 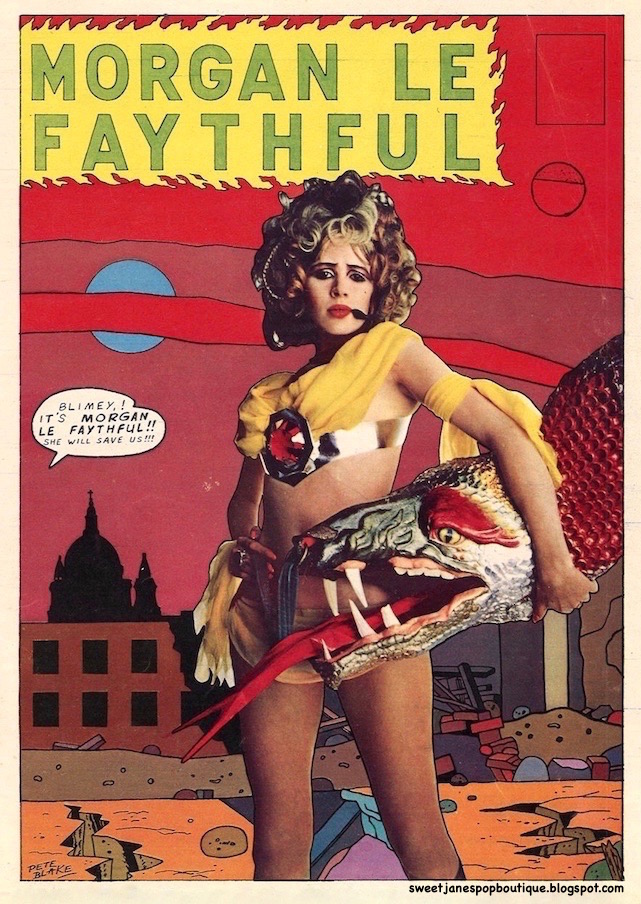 Blimey! It's Morgan Le Faythful!! She will save us!!! Morgan Le Faythful poster by Peter Blake (1968). Original photo of Marianne by Hans Feurer, sorceress costume and dragon created by Jann Haworth, and her hair was styled by Martin from Leonard's of Mayfair.

IMAGE CREDITS & LINKS
All images scanned by Sweet Jane from The Daily Telegraph 10th April, 1968. Further reading about The Girl on the Motorcycle (Dir. Jack Cardiff, 1968) also known as Naked Under Leather. View The Girl on the Motorcycle, and some of my previous post about Biker influenced fashion such as Smoke and Leather (1971). Rags for Riders (1971) and Dolly Rockers - Rave Magazine (1968). Peter Blake: The pioneer of Pop Art talks about his illustrious career and why he prefers hugs to drugs. A colossal cabinet of curiosities: Take a look inside Peter Blake's studio. Watch Peter Blake - What Do Artists Do All Day? (BBC Documentary Series). View some of my previous posts about 1960s poster art and pop design: The Men Behind the Poster Boom (1968); The Psychedelic Poster Art of Michael English and Nigel Waymouth; Rock Buster (1970); Frisco and Lorenzo Wong and Wildman Michael Chow by Peter Blake (1968); Discover more about the Arthurian legend of Morgan Le Fay. And finally, visit the website of the artist Jann Haworth.
Posted by SWEET JANE at 06:49