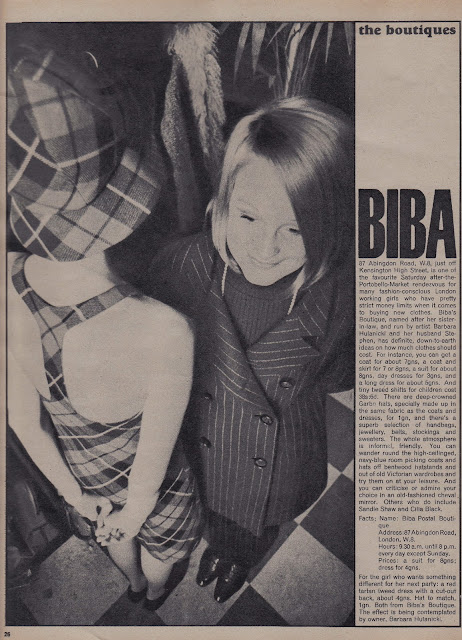 BIBA, 87 Abingdon Road, W.8, just off Kensington High Street, is one of the favourite Saturday after-the-Portobello-market rendezvous for many fashion-conscious London working girls who have pretty strict money limits when it comes to buying new clothes.  Biba's Boutique named after her sister in-law, and run by the artist Barbara Hulanicki and her husband Stephen, has definite, down-to-earth ideas on how much clothes should cost.  For instance, you can get a coat for about 7 gns, a coat and skirt for 7 or 8 gns, a suit for about 8 gns, day dresses for 3 gns, and a long dress for about 5 gns. And tiny tweed shifts for children cost 38s:6d. There are deep-crowned Garbo hats, specially made up in the same fabric as the coats and dresses, for 1 gn, and there's a superb selection of handbags, jewellery, belts, stockings and sweaters. The whole atmosphere is informal, friendly. You can wander round the high-ceilinged, navy-blue room, picking coats and hats off bentwood hatstands and out of old victorian wardrobes and try them on at your leisure. And you can criticise or admire your choice in an old-fashioned Cheval mirror. Others who do include Sandie Shaw and Cilla Black.

For the girl who wants something different for her next party: a red tartan tweed dress with a cut-out back, about 4gns. Hat to match 1 gn. Both from Biba's Boutique. The effect is being contemplated by owner Barbara Hulanicki. 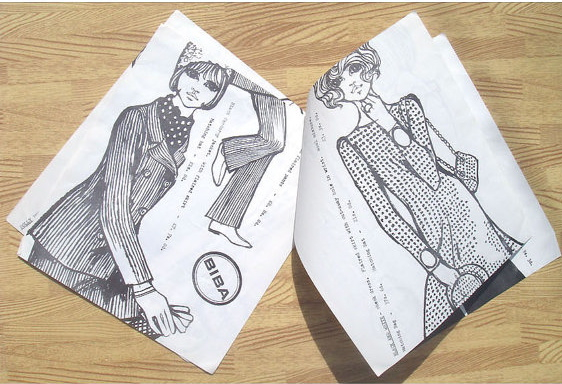 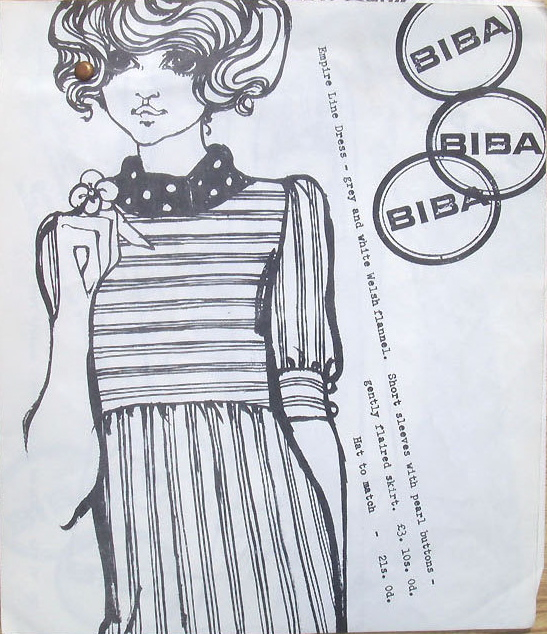 ABOVE: An extremely rare example of an early Biba Postal Boutique catalogue illustrated by Barbara Hulanicki, which turned up for sale on Etsy recently.  According to the seller, the post mark on the envelope was dated March 1965, which coincides with this particular Vanity Fair feature. I've uploaded a couple of display photographs from the seller's shop, because if you missed it.. there probably won't be another opportunity to see one like this for quite some time. If you take a closer look, you will notice that in the first Vanity Fair photograph, Barbara is wearing the double-breasted pin-striped version of the Corduroy trouser suit from the catalogue illustrated on the left, and the model with her is wearing a Tartan version of the dress with the cut-away armholes on the right, just below it. The final image is the actual cover of the catalogue.

HARRIET, is, in fact the name that ex-model Wendy Lewis chose to launch herself into the boutique business. Successfully, too. For after starting out almost single-handed-and, she says, as a big joke -19 months ago, she now has the satisfaction of seeing her clothes being worn by a great number of pacesetting model girls. The Harriet Boutique is almost hidden away in Gregory Place, a turning off Kensington Church Street. There at the top of a flight of near-rickety stairs is a rail of her latest suits, coats, and dresses, all waiting to be browsed through. Her clothes are excellent; extremely wearable and very much right 'in fashion' without being over gimmicky. This is the sort of place where you'd be almost sure to find something stunning either for the wedding you'll be a guest at or for an extra-special night out on the town. Average prices are: 14-20 gns for a coat and dress. Lots of care and attention are lavished on made-to-measure wedding dresses and you can have your head-dress specially made up here to suit yourself. Snooping around while taking photographs were being taken, we pounced with delight on lots of bits and pieces from Paris: small simple leather handbags, unusual jewllery, bead belts, plus a pretty selection of hats made by Royal College of Art students.

For the girl who wants something different for her next outing: a maroony cotton skimmy dress, patchwork coat with a deep scooped U neck, 'flat' bows at the waist and hem. About 19gns together from Harriet Boutique. 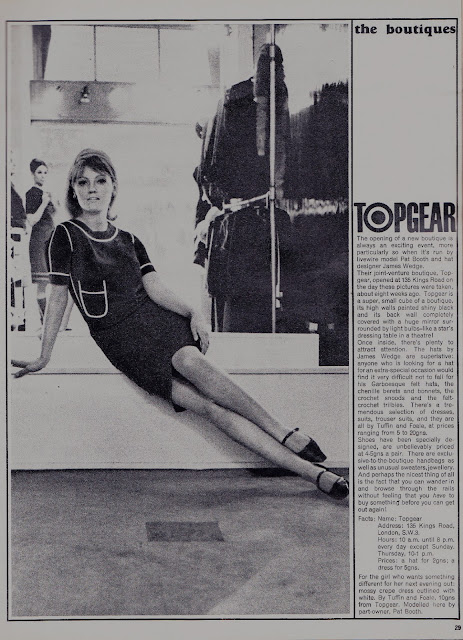 TOPGEAR. The opening of a new boutique is always an exciting event, more particularly so when it's run by livewire model Pat Booth and hat designer James Wedge. Their joint-venture boutique Topgear, opened at 135 Kings Road on the day these pictures were taken, about eight weeks ago. Topgear is a super, small cube of a boutique, it's high walls painted shiny black and it's back wall completely covered with a huge mirror surrounded by light bulbs- like a star's dressing table in a theatre! Once inside, there's plenty to attract attention. The hats by James wedge are superlative: anyone who is looking for a hat for an extra-special occasion would find it very difficult not to fall for his  Garboesque felt hats, the chenille berets and bonnets, the crochet snoods and the felt crochet-trilbies.  There's a tremendous selection of dresses, suits, trouser suits, and they are all by Tuffin and Foale, at prices ranging from 5 to 20gns. Shoes have been specially designed, are unbelievably priced at 4-5gns a pair. There are exclusive-to-the-boutique handbags as well as unusual sweaters, jewellery. And perhaps the nicest thing of all is the fact that you can wander in and browse through the rails without feeling that you have to buy something before you can get out again!

For the girl who wants something different for her next evening out: mossy crepe dress outlined with white. By Tuffin and Foale, 10gns from Topgear, modelled here  by part owner, Pat Booth. 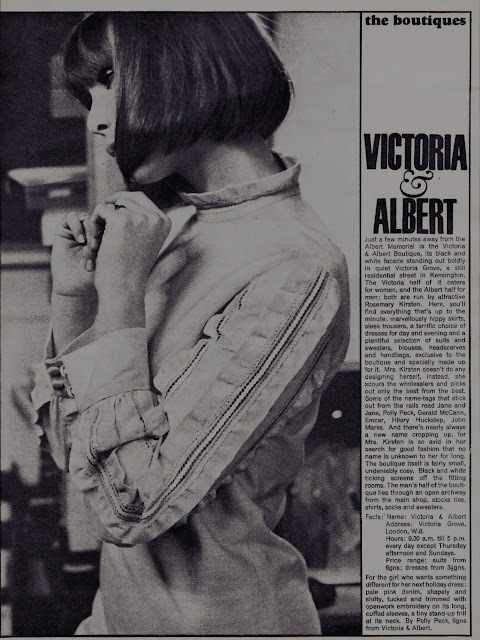 Just a few minutes away from the Albert Memorial is the Victoria and Albert Boutique, its black and white facade standing out boldly in quiet Victoria Grove, a still residential street in Kensington. The Victoria half of it caters for women, and the Albert half for men; both are run by attractive Rosemary Kirsten. Here, you'll find everything that's up to the minute: marvellously hippy skirts, sleek trousers, a terrific choice of dresses for day and evening and a plentiful selection of suits and sweaters, blouses, headscarves and handbags, exclusive to the boutique and specially made up for it. Mrs. Kirsten doesn't do any designing herself, instead, she scours the wholesalers and picks out only the best from the best. Some of the name-tags that stick out from the rails read Jane and Jane, Polly Peck, Gerald McCann, Emcar, Hilary Huckstep, John Marks. And there is nearly always a new name cropping up, for Mrs. Kirsten is so avid in her search for good fashion that no name is unknown to her for long. The boutique itself is fairly small, undeniably cosy. Black and white ticking screens off the fitting rooms. The man's half of the boutique lies through an open archway from the main shop, stocks ties, shirts, socks, and sweaters.

For the girl who wants something different for her next holiday dress: pale pink denim, shapely and shifty, tucked and trimmed with openwork embroidery on it's long cuffed sleeves, a tiny stand- up frill at it's neck. By Polly Peck, 6gns from Victoria and Albert.


PHOTO CREDITS & LINKS
All images scanned by Sweet Jane from an original fashion feature in Vanity Fair, February 1965. Biba catalogue example uploaded from the bekabeka75 shop on Etsy. Discover more about the new boutique boom in some of my other posts: The British Boutique Boom! 1965 (Pt one) & (Pt.Two); The Carrot On Wheels - David Bailey's Boutique! 1965; Gear Guide 1967... Who's Who in Carnaby Street & Kings Road etc.; Biba: London's Mini Mecca 1967; Apple Clothing - Apple Boutique 1968; Lift Up Your Skirt And Fly Boutique - 1969;  and finally, some London Boutique Fashion from 1970.