Swinging London has one club raving seven nights a week―the Bag O' Nails in Kingly Street, near Carnaby Street and just off Regent Street in London's West End, and it's one of the few places where one can still see London at its grooviest. But what may amaze many of its teenage patrons is that their parents may well have jitterbugged at the Bag to the sound of Ike Hatch, a coloured jazz singer bandleader, who was one of the clubs top attractions in the 1930s. 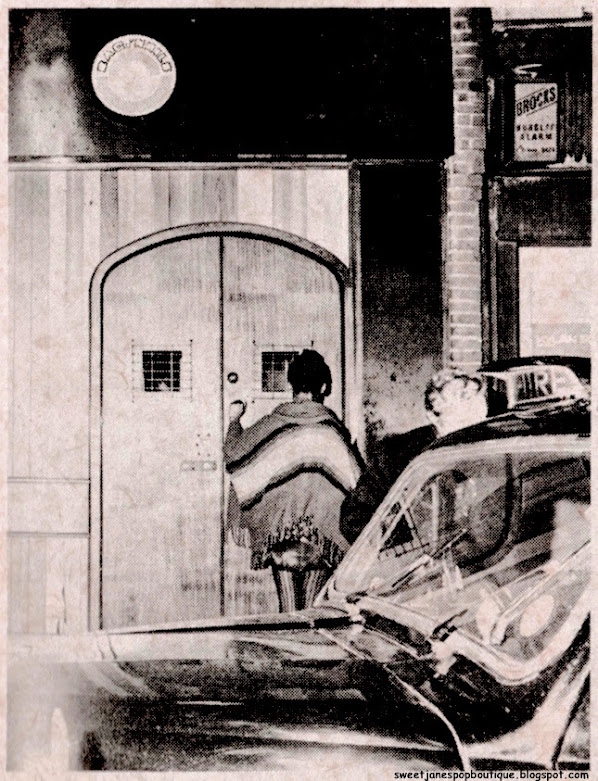 The club was revived last year by agent-manager John Gunnell and London club-owner Lawrie Leslie. Since its oak-beamed doors first swung open to the pop-hungry public the club has seldom had a night when it's been anything less than crowded. Although the Bag is all on one level, alcove tables provide privacy for anyone wanting to have a quiet drink or talk business although often this is not possible because of the volume of the bands which play there. But then most people go to the club to simply enjoy themselves. 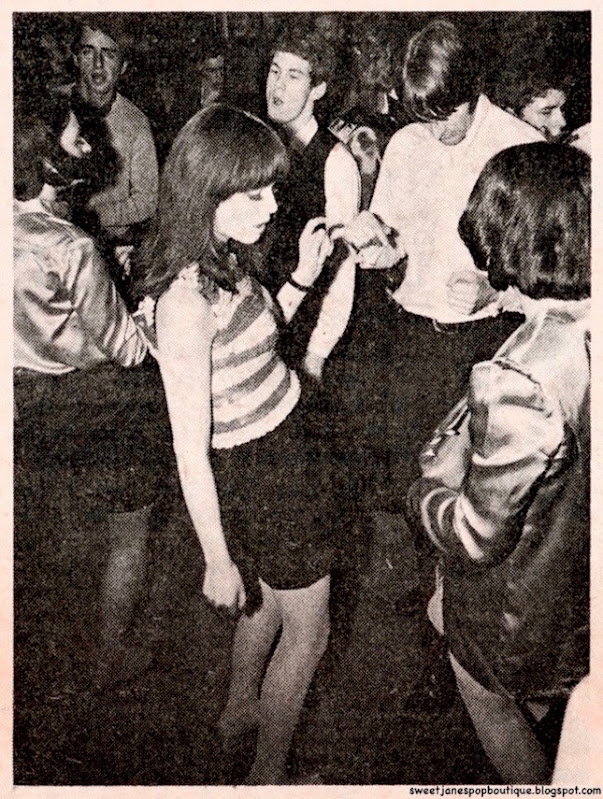 Regulars at the Bag O' Nails include Georgie Fame and his fiancee Carmen, Eric Burdon, Zoot Money, Chris Farlowe and Geno Washington. The Rolling Stones like it and the Beatles occasionally look in. Brian Epstein is sometimes seen talking business with his partner Robert Stigwood, and Mickey Dolenz went down when he was in London. 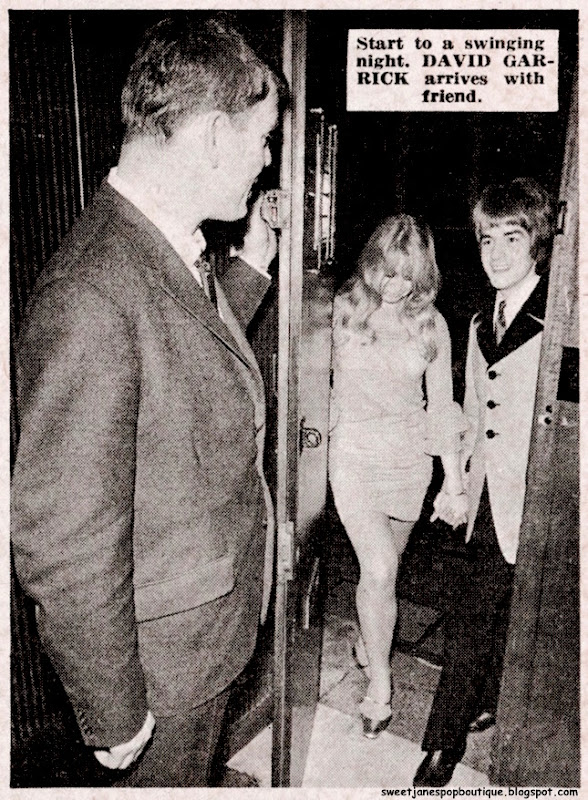 The original idea was that the Bag O' Nails should be more comfortable and roomier than its contemporaries. Certainly it is more comfortable but unfortunately on some nights the popularity of the club exceeds its size―particularly if a name artist is appearing. A measure of Gin or Scotch costs 3. 6d. but some people prefer to buy it by the bottle which would cost £5 10s. The club is also open for late-night meals. Unlike most other London discotheques the Bag is open on a Sunday―a boon to the people who go there after a concert at the Saville Theatre. Groups play ''live'' every night and top American singers frequently open their British tours there. 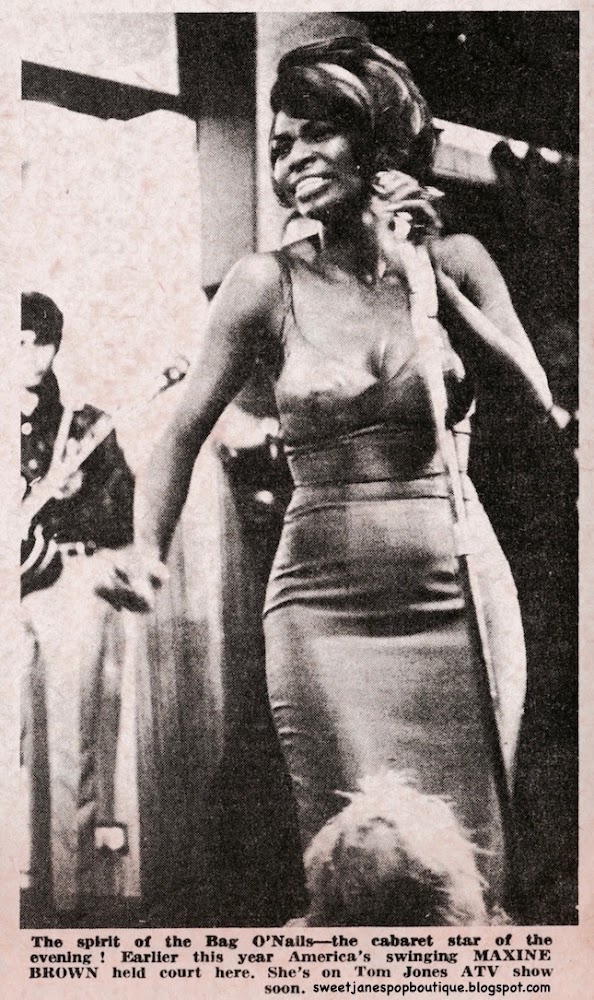 Maxine Brown joined The Q-Set on lead vocals for a UK tour at the end of January 1967, kicking it off with a gig at Tiles in Oxford Street on the 31st, followed by two dates at the Bag O' Nails on the 1st and 2nd of February 1967. You can find the rest of the tour dates and more courtesy of Chris Bishop on the excellent Garage Hangover. 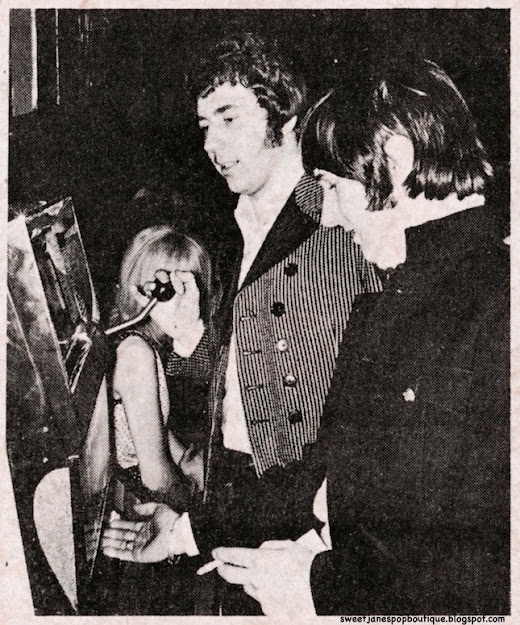 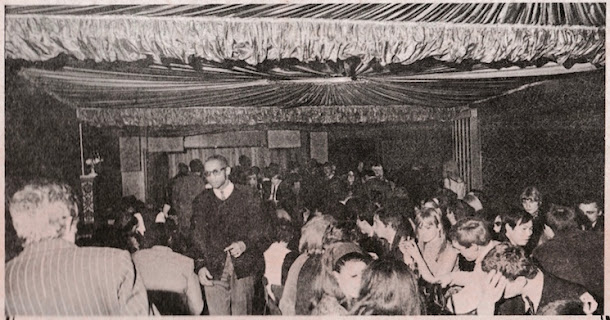 IMAGE CREDITS & FURTHER READING
All images scanned and text transcribed by Sweet Jane from an original report by Norrie Drummond for the New Musical Express,  April 1st, 1967. Here you'll find a selection of Norrie Drummond's work for the NME during this period, the interviews include Dinner with the Beatles' published May 27th 1967, one week after the Sgt Pepper Launch Party; 'Paul Is Still Seeking, But George Has Found Great Faith' an exclusive interview with Paul McCartney at his Cavendish Avenue home published in the September 9th 1967 issue of the New Musical Express, and 'Norrie Drummond Lunches With John, Paul And Ringo' published 25th November, 1967. See also Question-time with…Stevie Marriott of the Small Faces for New Musical Express December 17th 1966, Nothing nasty behind our light and colour effects Says Pink Floyd`s Roger Waters New Musical Express, 1st July 1967, and Who are mellower fellows now, an article about The Who from February 4th 1967.

Discover more about the Gunnell brothers, Rik and John, who ran the club over on From Roots to Boots: The Slade Story blogspot. Read photographer Gered Mankowitz's account of seeing Jimi Hendrix play at the club on the 25th of November 1966, ''They were all there that night in late 1966, packed into the Bag O' Nails club in Soho: Clapton, Townshend, Beck and every guitar great of the time. They had convened to check out a new black-American guitarist who was causing something of a buzz in the music scene.'' And finally, let's not forget that Kleptomania, the clothes shop owned by Tommy Roberts and his partner Charlie Simpson was right next door at number 10 Kingly Street...it may have been off the main Carnaby Street thoroughfare, but it couldn't have been better situated to catch the eye of  every pop star who frequented the Bag O' Nails, so, they'd spill out out of the club at three or four o'clock in the morning and spot something that they liked in the window, then send someone around to get it for them the following day.