ON THE FLOWER POWER FASHION SCENE

The hippie cult, like it or loathe it, is here. Compared with its baubles, bangles, beads and bells, the Quant-type mini-skirts pale into Establishment respectability. Where does it all come from?

In case you have been kept awake o' nights wondering where Patti Beatle Boyd Harrison got that get up in which she flew off to Los Angeles, I can now reveal the secret fashion source! It's a basement in London's Montague Square, where the founder members of the Hippie haute couture hang out.

Two girls, a man, and a business manager co-habit here among the paraphernalia of psychedelia, turning out those snappy little Hippie numbers for boys and girls that are being so enthusiastically received by the Pop elite. You know the kind of stuff. The female version look as if they're made of a patchwork quilt that got too hot and melted. And the finished fully-accessorised effect is somewhere between Ophelia, Pocahontas and a sale of work.

Actually doing the designing are two king-sized Dutch girls, they are Marijke Koger and Josie Leeger, both twenty-three. Helping them along their beaded, baubled and braided path is Marijke's Dutch husband Simon Posthuma who is twenty-eight, has longer hair than either of the girls, and at the moment of our meeting wore a pendant, a purple velvet tunic, pale yellow peep-toe sandals and some extremely form-fitting pants in pink and lime satin stripes, bias-cut.

The only un-Dutch number of this Hippie set-up is a Northern lad called Barry Finch, who goes in for rather self-conscious hand kissing, agrees with his Dutch chums that Love is All, and was once a publicist for The Saville Theatre. ''We are now,'' says Simon, explaining their success in the dizzier reaches of Swinging London, ''personal tailors to the Beatles''.  ''We also, of course, make Patti's clothes,'' said Josje (pronounced Yoshy), who claims to have had a ''whole fashion scene going for her back in old Amsterdam.'' Josje was wearing blue printed silk braid-bound pyjamas, a blouse in three multicoloured, unrelated prints, snakeskin thong sandals up to her knees, a jewelled breastplate and a bandeau and beads in her freak-out hairdo so recently acclaimed by Paris. Apart from designing clothes Marijke―pigtails, purple thong sandals, beads, a string of hippie bells, and a multi-coloured mini-frock in the psychedelic manner―designs posters, while Simon concentrates on commercial art and painting.

The dress can also be seen worn as a top by Pattie's sister, Jenny Boyd, throughout this 1967 promotional film for Donovan's 'A Gift From a Flower to a Garden' directed by Karl Ferris, which is available on Sunshine Superman - The Journey of Donovan (Double Dvd).


His work includes oils, watercolours, a psychedelic surround for a fireplace for George Harrison, and a psychedelic piano for John Lennon. Immediate plans include writing a show suitable for all the family, opening a shop to sell Beautiful Things to Beautiful People, and most important of all branching out into fashion mass production. ''Not just for women shouted Marijke, over the Indian music on the hi-fi, ''but for children too, and for men. Our things will be so beautiful that anyone who sees them won't be able to bear not having them.'' Prices? They put forward some beautiful vague thoughts. ''Oh, competitive,'' they said. With what, I asked?  They just smiled dreamily. Well, how much for instance, was Patti Boyd's dress? ''Expensive,'' said Josje. How expensive? 'It's all pure silk and hand-done,'' said Marijke counting her beads and bells. With a deft change of the subject, Simon suggested that the whole world was ready for the Hippie way of life and fashion, and anyway, Carnaby Street was dead, finished, and full of rubbish. 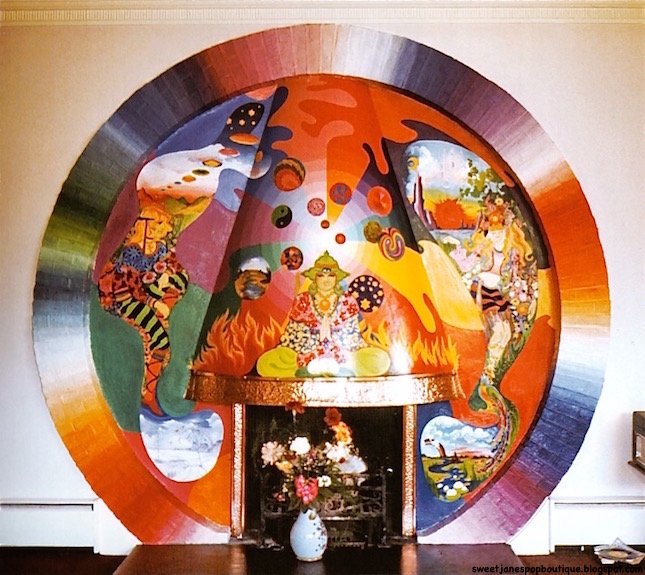 Above: The aforementioned psychedelic fireplace mural which George and Pattie Harrison commissioned for their Kinfauns home in 1967. Although The Daily Mail article seems to imply that this was entirely Simon Posthuma's work, it was actually designed by Marijke Koger, and executed by both Simon and Marijke.

If it weren't for the squares of the world, there would be no problem. They wouldn't for a start have to repaint their front door. Their Landlord it seems, would prefer something in basic black, to the electric blue with stars, that now marks the portals of the headquarters of London's first Hippie Haute Couturières.

'Felicity Green on the Flower Power Fashion Scene' scanned by Sweet Jane from an original article by Felicity Green for The Daily Mirror, August 8th, 1967, which was republished in Sex, Sense, and Nonsense. Felicity Green on the 60s Fashion Scene (ACC Editions). The colour image of the psychedelic print mini dress designed by Marijke Koger and Josje Leeger for Pattie Boyd in 1967 is courtesy of The Daily Beatle (via Pattie Boyd's exhibition at the Rockheim Museum, 2014). The Kinfauns fireplace mural was scanned from Electrical Banana by Norman Hathaway and Dan Nadel (Damiani). Discover more about Marijke Koger, Simon Posthuma, Josje Leeger and Barry Finch, otherwise known as The Fool Design Collective (1967).  View some examples of Pattie's modelling career via Fine Feathers For Night Birds: Pattie Boyd in Rave Magazine (1964) and Big News! Little Prints! Pattie Boyd and Jill Kennington in Vanity Fair (1965). You'll find Pattie on the other side of the camera at Pattie Boyd Photography. As seen in this Dutch newspaper article from December 1965,  Josje Leeger and Marijke Koger did indeed have a successful Flashing Fashion scene going, long before they arrived in London! And finally, some further reading on the continuing influence of the Hippie scene on fashion in What's wrong with beads and bells? (1967), The Rise and Decline of the Afghan Coat 1966-197?, and Native Funk & Flash! An Emerging Folk Art (1974).
Posted by SWEET JANE at 12:00