PINCH THE SHIRT OFF HIS BACK!
Girls are stripping men of their shirts! Well, not bodily, but girls are crowding into men's stores to snap up their snappy shirts. Is it because we're envious? Because we're being outshone by dazzlingly dressed males? We ask leading menswear firms the reason for this shirt stampede. Here are their answers, plus a few of our own. 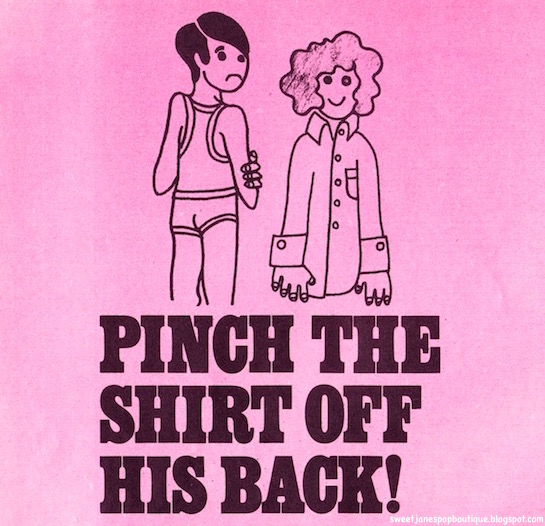 Cecil Gee say girls go for the gorgeous colours now available: pinks, purples, greens, yellows, deep blue. Girls all over the place flock to buy these bright colours that they can't get in blouses in the women's shops!  Mr Fish make some of the most beautiful (and expensive!) shirts in London. They specialize in made-to-measure shirts that are romantically patterned in silk, some with huge bloused sleeves—and girls go for this look so much that twenty-five per cent of their customers are female. In fact Mr Fish are happy to steal girls' ideas for their shirts and make them up for men.  Carnaby Street Shops find that girls go for the cut of their shirts, which they say have been tapering into the waist for a long time now. The pretty colours and flowery patterns obviously suit girls as well as men, and sizes in Carnaby Street tend to be skinnier too: a size 14 in shirts is about the same as a size 12 blouse.  Take Six who make the nearest thing to a blouse for a men-roll collared, buttoned down the back, in heavy satin—are selling over sixty a day in their Gt. Marlborough Street shop, a lot of them to girls for evening wear.


John Michael say that girls descend in flocks on their Westerner shops tracking down the genuine John Wayne look: the very fitted western shirts are pounced on, together with fringed leather waistcoats. Lots of super coloured shirts at all their branches too. And this is probably the key to the whole trend—there are shirts to suit every mood: pick the right one and you can look like a wild thirties gipsy, a dashing cowgirl, romantically Byronesque, in fact, very, very feminine. And now that shirts are so much more shaped you needn't swim in baggy folds around the waist: sleeves are still very long—they're cut to be long on a man, so that cuffs show under jackets—but most girls like the fragile ''little girl lost in a man's shirt'' effect this gives. And girls' blouses still can't match the crispness of men's shirts, and the shapeliness of collars which never go limp and curled up in the wash. So pick your look, and your shirt, from the five shown here, and discover that a shirt doesn't always ''look better on a man!'' 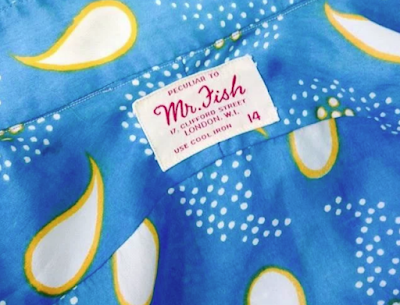 An example of the Mr.Fish shirt photographed above, in one of the alternative colour options as mentioned. Although this item sold in 2014, there are several excellent detailed photographs of it still available to view courtesy of Vic and Bertie Vintage...well worth a look! 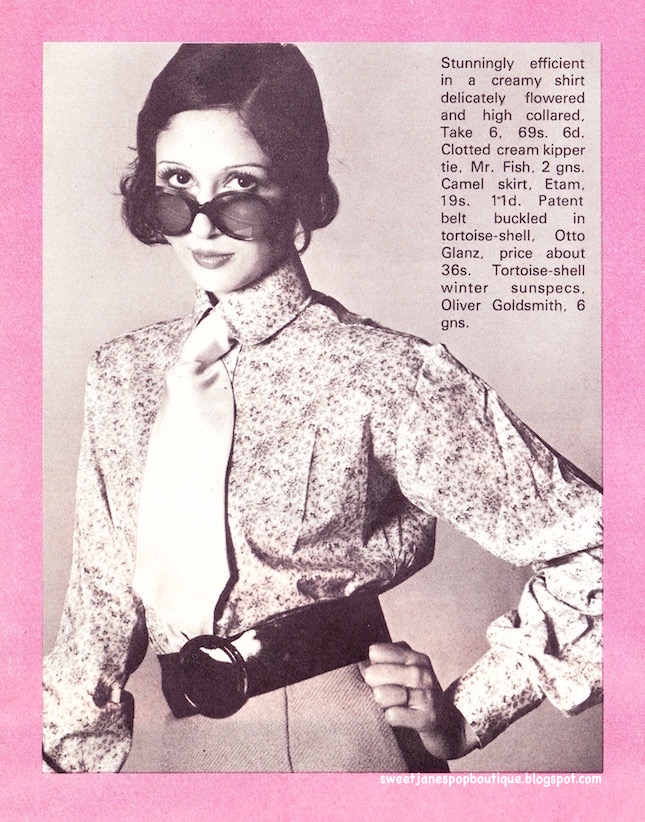 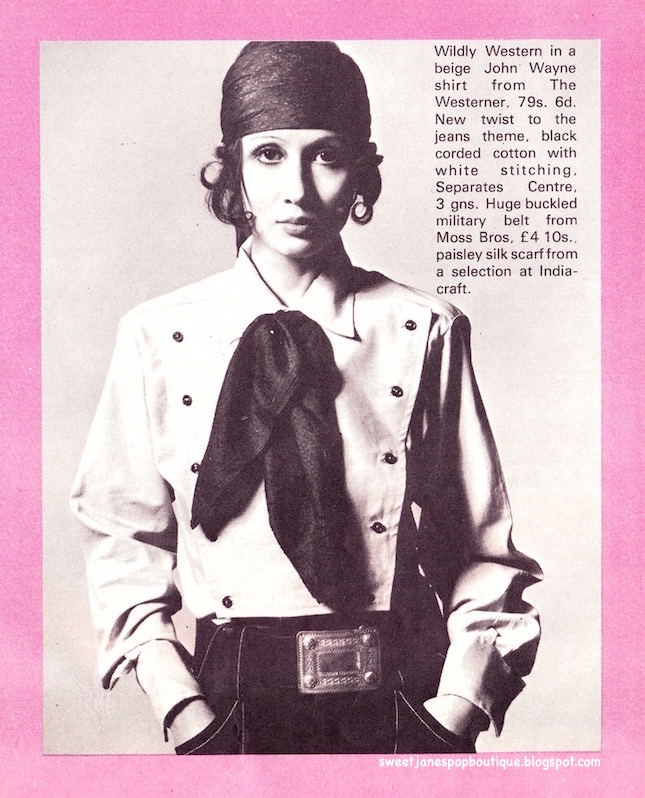 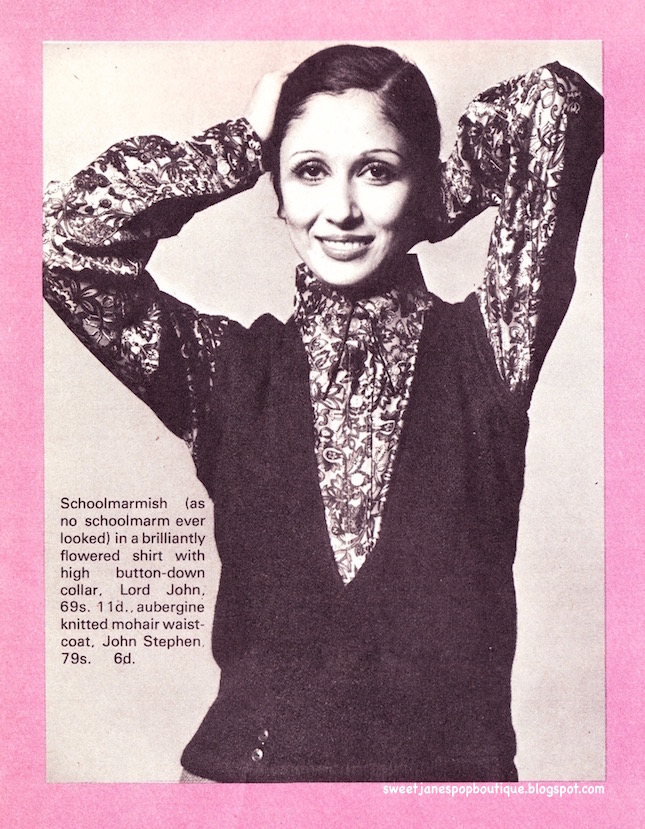 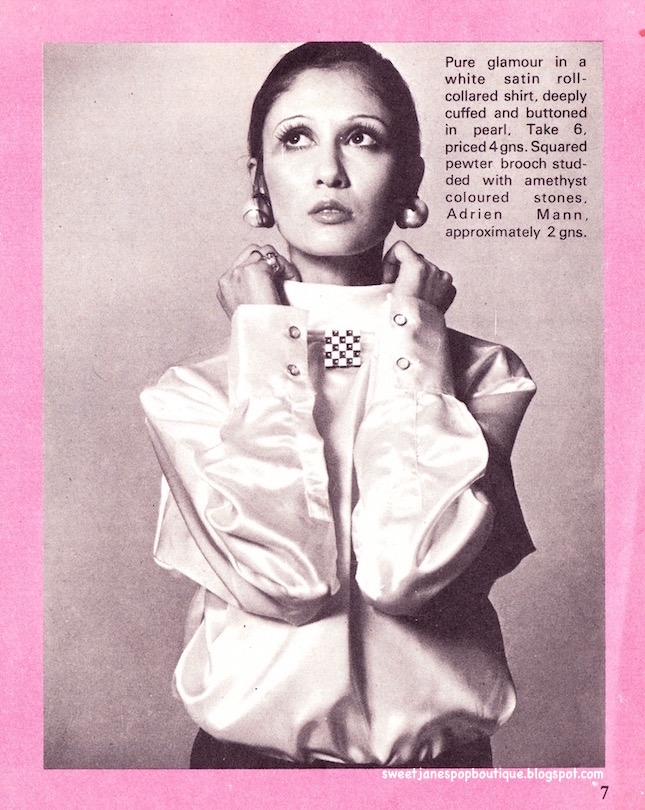 All images scanned by Sweet Jane from Intro Magazine, January, 1968, with special thanks to Kirstin Sibley for the gift! Photographer and model uncredited/unknown. More fashion for him & her from The Boyfriend book (1970). An excerpt from Sex and Unisex: Fashion Feminism, and the Sexual Revolution by Jo B. Paoletti on Pop Matters. Examples of Le Masculin Féminin fashion trend from Dépèche Mode (1971). Just Dandy: The Style and Legacy of Mr Fish. Terry Rawlings interviews Warren Gold of Lord John, Carnaby Street (Part One) and you'll find the rest of the Warren Gold/Lord John interview here in Part Two. More from The Westerner in Rags for Riders (1971). John Stephen of Carnaby Street womenswear. John Michael Ingram: The Menswear designer whose refined tailoring made his clothes and shops a favourite of 1960s mods. The Victoria and Albert Museum's Oliver Goldsmith Eyewear Collection. And finally, Clothes by Mr.Fish, Douglas Hayward, Blades and other tailors, who see nothing sissy about finery for men, and are influencing the ready-to-wear racks (1968).