How many of you have bothered to do anything to your rooms since you moved into them months and months ago? Are you still living in a shamefully untidy bed-sitter, and do you still get that 'How I wish I had a cheerful, bright room' feeling every time you come home from work? Have you, for weeks now, been meaning to get down on your hands and knees to scrub and scrape? Has your boyfriend repeatedly offered to help wallpaper the ceiling and bang the nails in? We asked Barbara Hulanicki of Biba to design a fairly inexpensive bed-sitter for 19. Incorporating a few original ideas that were not unduly complicated to carry out. She chose Pontings, which has a good whitewood department—the result is rather stunning. You can see the 19 Biba and Pontings bed-sitter on display, from the 19th September, in the window of Pontings, next door to the High Street Kensington tube station. All merchandise can be got from Biba (opposite Pontings) at 124 High Street Kensington, London W8. 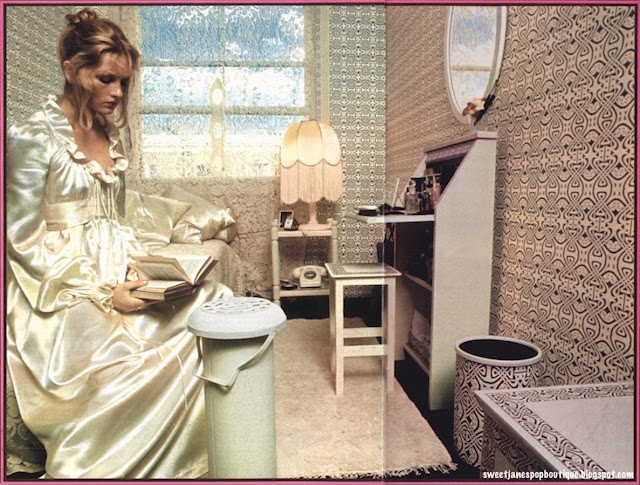 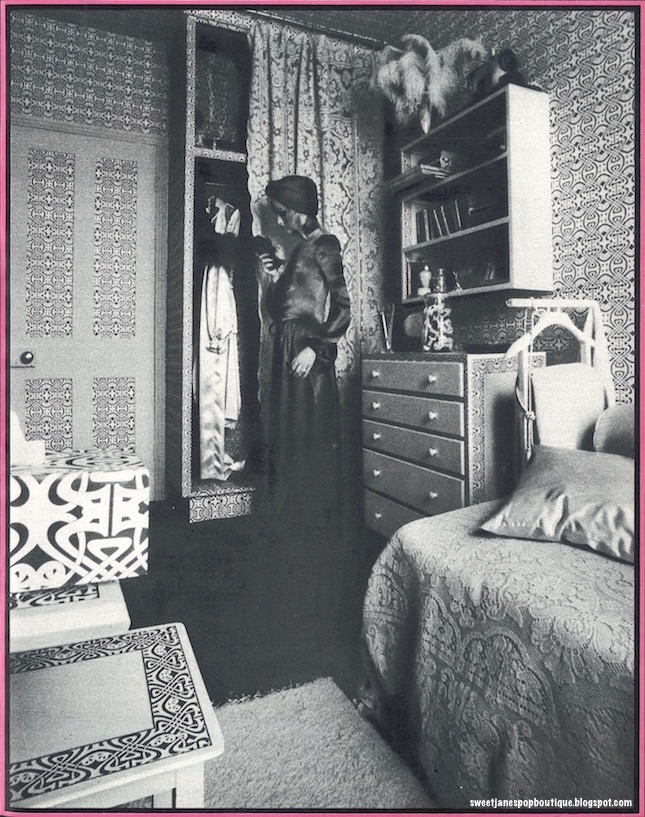 All you need is a little imagination to change completely the look of a room. Here, along with Biba, we transformed a bed-sitting room and chose a chocolate/cream colour scheme. After the necessary preparations (see below) we gave the furniture a top coat of Biba cream Flat Oil Paint and hung paper on the walls and ceiling and—for continuity used wallpaper borders, applied with Polycell, as a decorative trim, inside the window, bookshelf, stool, desk, blanket trunk, dressing-table and chest of drawers. The wallpaper was also applied to cover the open wardrobe (see picture 3), door-panels and necessary extras. Biba lace cushions and lampshades come in a variety of colours. The following instructions from the furniture manufacturer produce a really professional finish. 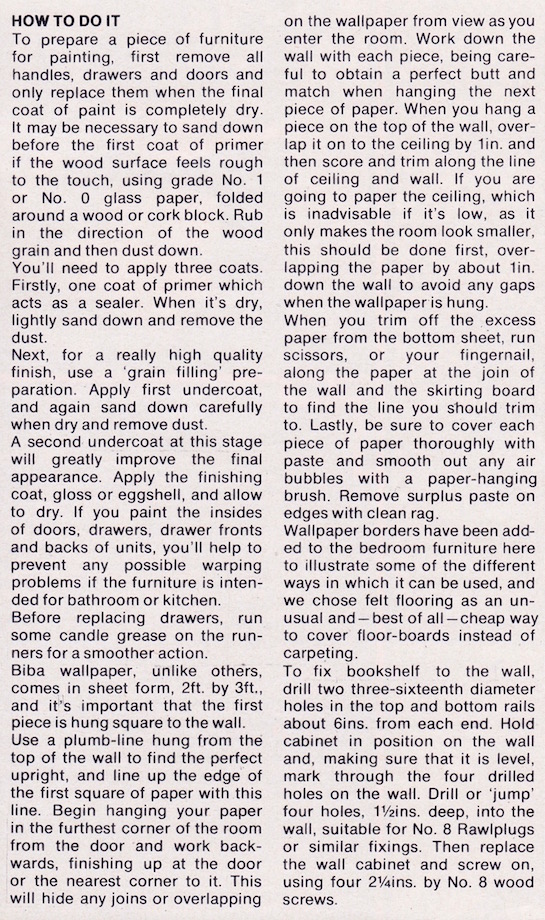 Three years later, upon moving to the much larger Derry & Toms building at 99-119 Kensington High Street—twenty times the size of its predecessor, Barbara Hulanicki finally had enough room to expand the lifestyle goods section into a fully fledged Household Department located on the fourth floor of the new premises. It was stocked with Biba furniture, rugs, art deco mirrors, lampshades, fabric, tableware and kitchenware, wallpaper, paint, and much more, along with twenty-four individually themed Biba room sets designed to display the products as they would look best in a variety of domestic settings, to inspire customers with ideas on how to transform their own living space. The opening day Big Biba newspaper, art directed by Steven Thomas and beautifully illustrated by Kasia Charko which had been created to familiarise shoppers with the new store's layout, devoted an entire page to it, the first line of the introduction copy declared that ''This is where houses start becoming homes.'' 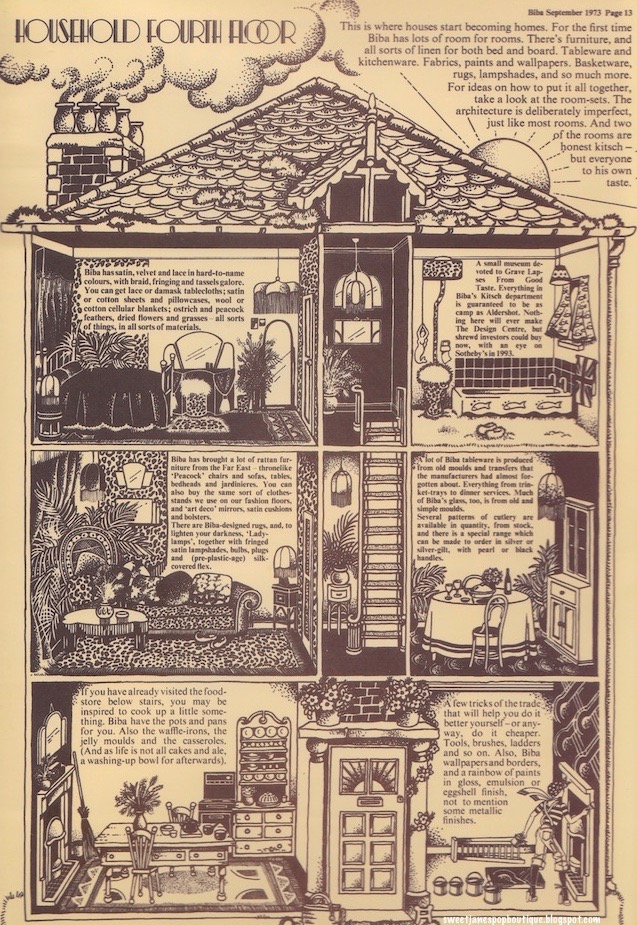 The Biba Household Department illustrated by Kasia Charko for the opening day newspaper, September 10th, 1973.  A total print run of 300,000 copies were produced on newsprint, with a further 1000 limited edition produced on cream cartridge paper.

Some examples of the twenty-four themed Household room-sets, permanently on display at Big Biba 99-119 Kensington High Street, each decorated and stocked with products from the store. 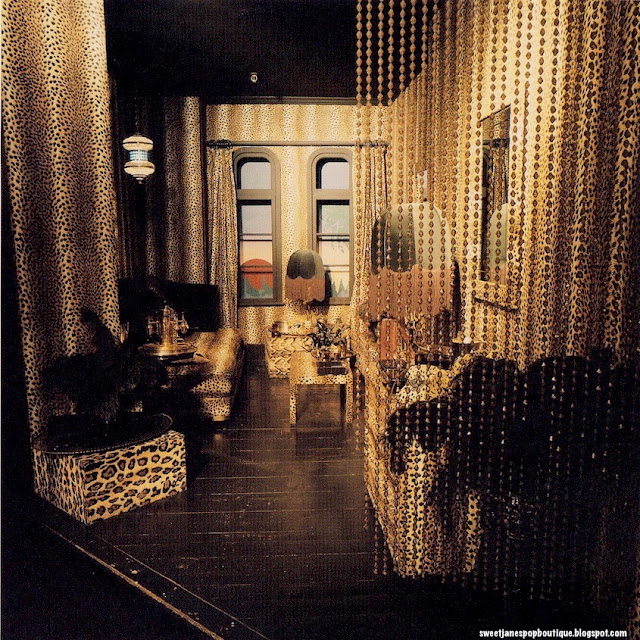 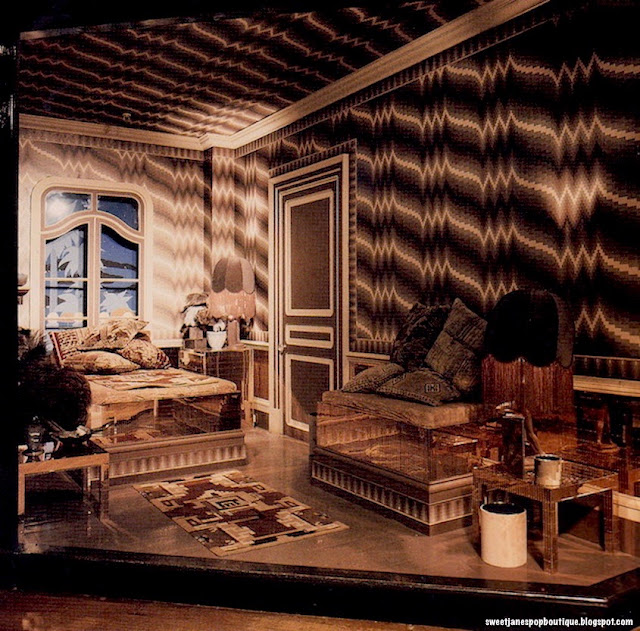 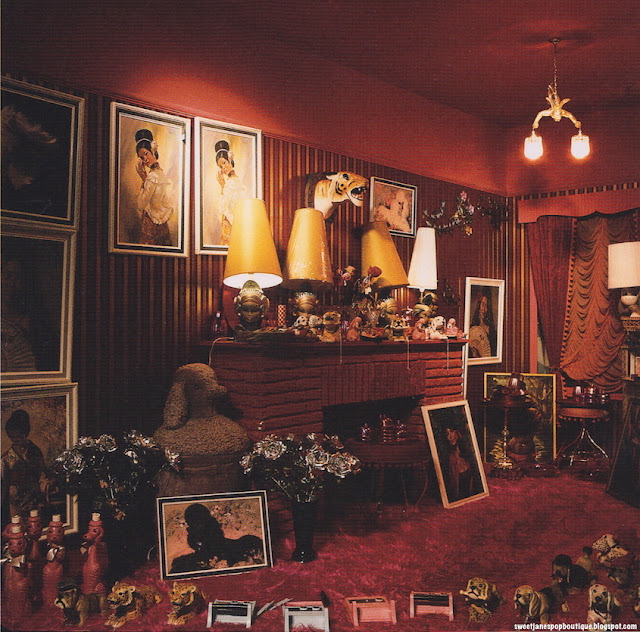