'A Raver's Pop Guide Round Britain' published in May of 1966, just over a month after Time Magazine had proclaimed London as the city of the decade!—devoting the cover and 13 pages of its April 15th Vol. 87 issue to all things 'Swinging London'—an expression which was initially used jokingly by one of the editors on Time, before becoming a working title for the forthcoming article. According to Andrea Adam's first-hand account in Jonathon Green's excellent Days in the Life 1961-1971, she said, that although it was the working title, they never tried to push it as a concept, however, it caught on within the office, so much so, that eventually 'London: The Swinging City' was used on the cover story which was heavily illustrated and produced in a pop style collage by Geoffrey Dickinson. The intro to the feature, written by Piri Halasz, declared, among other things, that ''In a decade dominated by youth, London has burst into bloom. It swings; it is the scene. This spring, as never before in modern times, London is switched on. Ancient elegance and new opulence are all tangled up in a dazzling blur of op and pop. The city is alive with birds (girls) and Beatles, buzzing with mini cars and telly stars, pulsing with half a dozen separate veins of excitement. The guards now change at Buckingham Palace to a Lennon and McCartney tune, and Prince Charles is firmly in the longhair set.'' (Great Britain: You Can Walk Across It On the Grass p30). Subsequently making it one of the most influential pieces written on the Swinging London phenomenon at the time. And the rest, as they say, is history.


A RAVER'S POP GUIDE ROUND BRITAIN!

England swings! Not only in London, but all over the country fans are wide-awake to the latest raves in fashion and pop. Come for a RAVE-conducted tour as we show you what's happening pop-wise and fashion-wise in other RAVE people's worlds, as we pay a flying visit to RAVE centres Manchester, Birmingham, Liverpool, Newcastle, and Bristol. 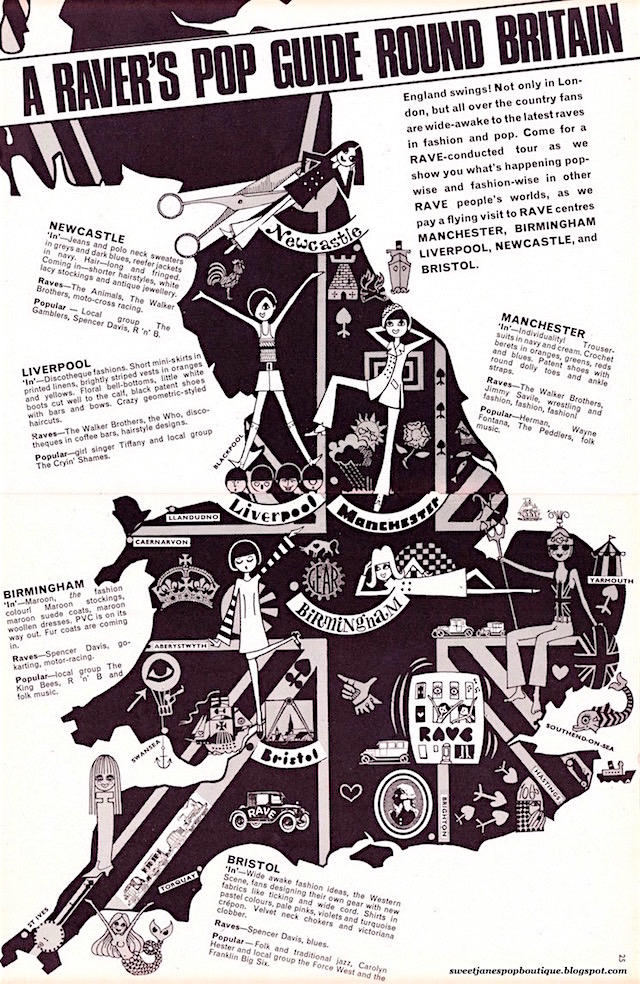 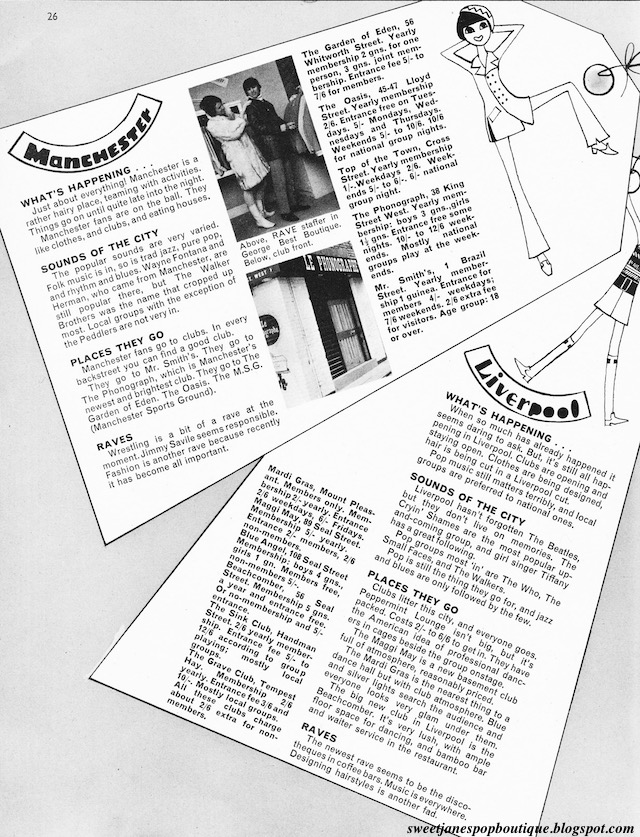 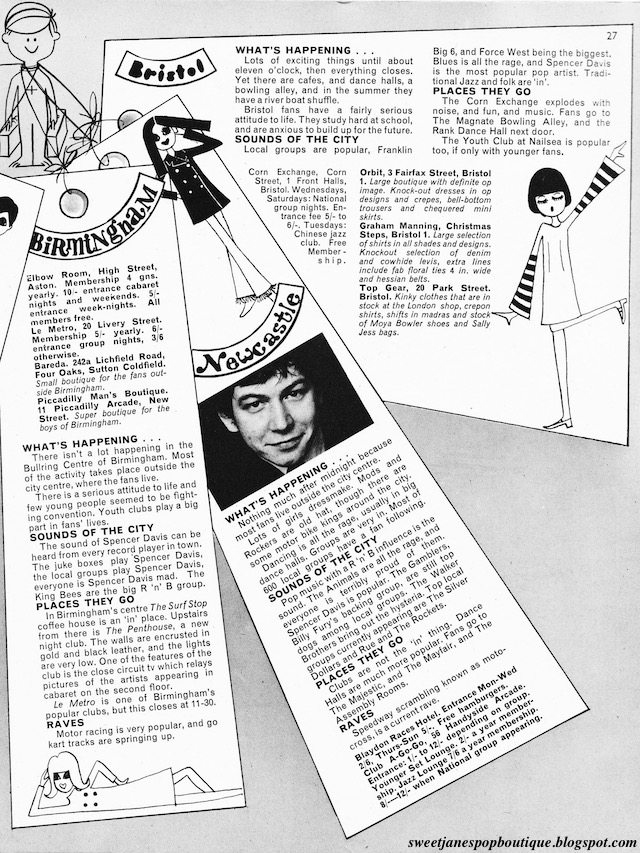 IMAGE CREDITS & LINKS
All images scanned by Sweet Jane from RAVE Magazine - May, 1966. Illustrations/Artist uncredited in the original publication. View my previous posts about the far reaching influence of Cathy McGowan & Ready Steady Go throughout Britain, The Birdcage Boutique & the fashion scene in Nottingham, and the Sheffield boutique Lift Up Your Skirt and Fly. Let's not forget that Biba's Postal Boutique delivered the 'total look' through the letter box to those living outside London. Further information about the nightclub scene in Manchester in the 1960s & much more, on the excellent Manchester Beat website. The tale of a couple of 'young girls coming down from the North with their heart full of dreams' in Smashing Time (1967) - George Melly's satire on the phenomenon of Swinging London, Directed by Desmond Davis.  Take a look at George Best's Manchester Boutique as featured in the opening scene of  The Lover's (1973). And Discover Britain on film in the 1960s & 1970s via the BFI Website. A selection of  programmes from the 2016 BBC regional documentary series about life in 1966. Living in '66: Suits, Boots and Northern Roots, Newcastle A Gogo, Pop, Pirates and Postmen. And finally, Hit The North with The Fall.