Small boutiques with their slightly different clothes have been around for a long time. But the big business boutiques so characteristic of London today appeared only six years or so ago, revolutionising fashion here and throughout the world. Who were the innovators? Here we look at the five best-known boutiques, and also their owners.

Kensington High Street, W8.
Biba, probably the best known of all the boutiques, began business six years ago with a mail order offer of a gingham shift and scarf for 25s, because Barbara Hulanicki thought it was impossible to buy inexpensive well designed clothes and decided to do something about it. At the end of last year, in premises 16 times the size of the original boutique in Abingdon road. Biba opened as a store selling not only clothes but also accessories, make-up and home furnishings, Barbara Hulanicki's distinctive style is carried through all her designs, sold only at the store and by mail order catalogue. She works with her husband Stephen Fitzsimon. 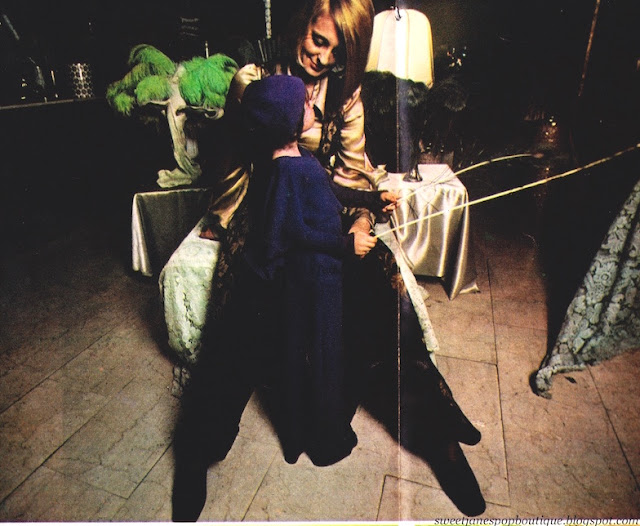 1.Barbara Hulanicki in the store, where carpets and furnishings have all been designed with complementary colours and patterns. Child's dress, 6 gns; matching cap 2 gns; tights 10s 6d. Photograph by Duffy. 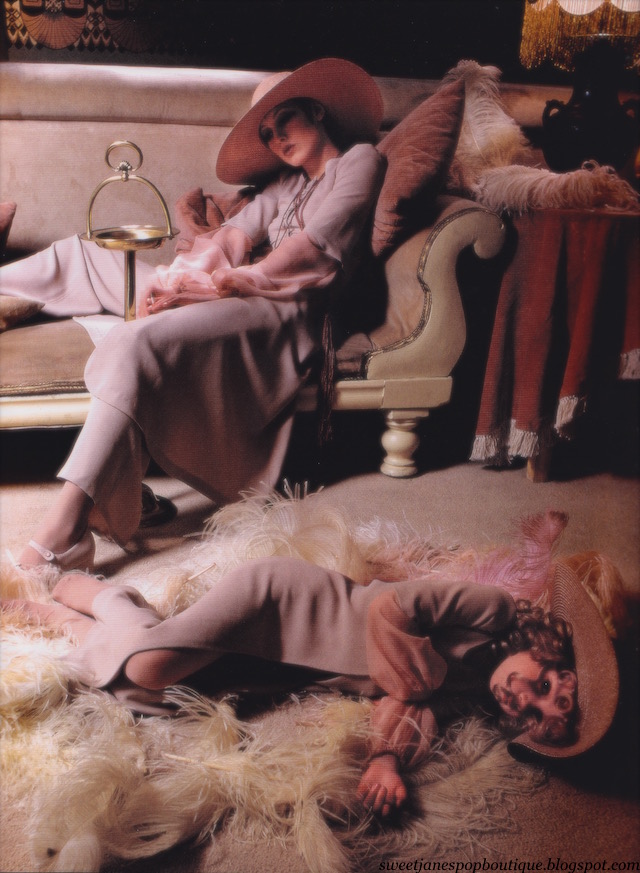 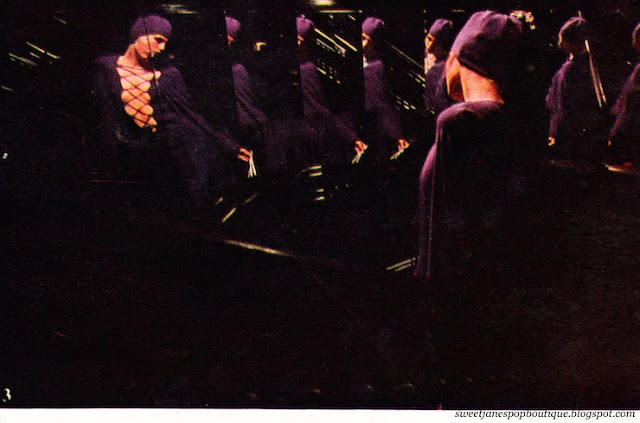 QUORUM
113 King's Road, SW3
when Quorum opened in 1964, the clothes designed by Ossie Clark and Alice Pollock, who had studied at the Royal College of Art together, were considered outrageous. They were worn mainly by people in the film and pop worlds. Now customers fly in from all over the world. Ossie Clark's wife, Celia Birtwell completes Quorum. She designs the prints for the fabrics. Ossie Clark makes clothes in which women ''feel and look beautiful''. A year ago, Quorum expanded when Radley Gowns bought a large percentage of the business, opening a chrome-fronted boutique on the Kings Road. Ossie and Alice now design a certain number of clothes for Radley, and export to Germany and Italy. 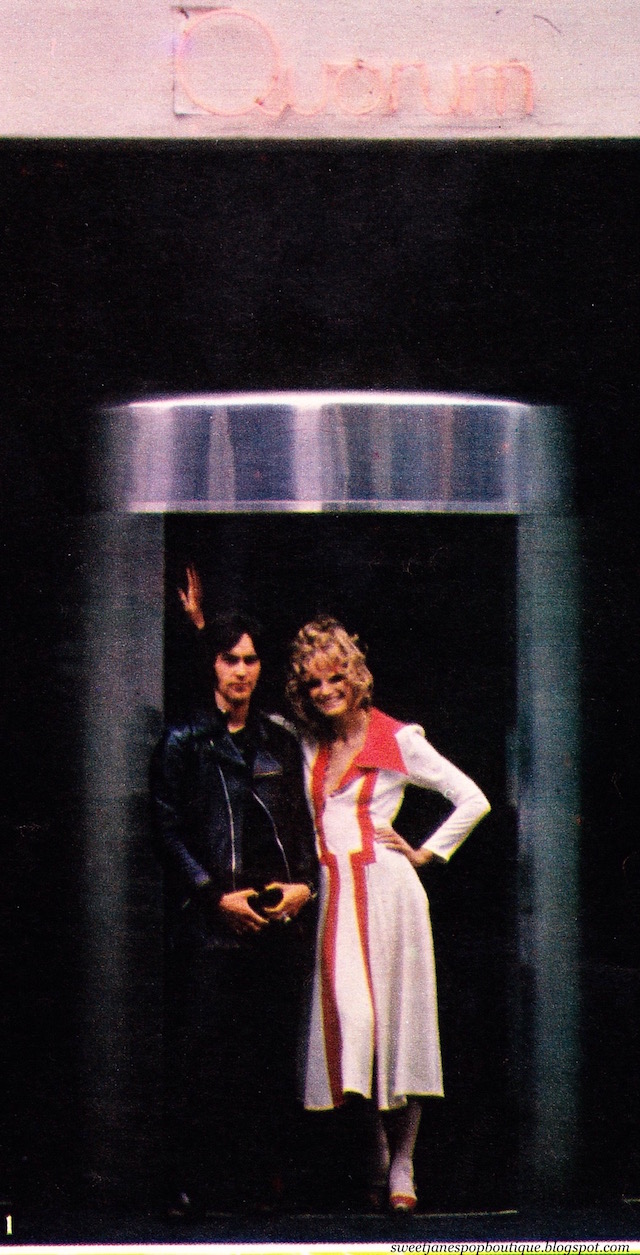 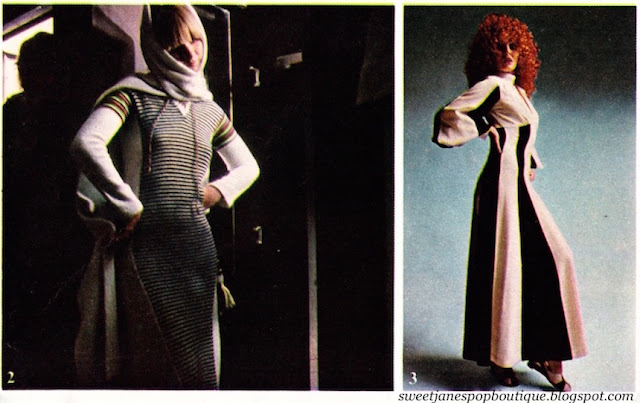 
Film footage of the much talked about but rarely seen Quorum Boutique at 52 Radnor Walk, which includes an interview with Alice Pollock and Ossie Clark, the clip is from the CBC daytime series 'Take 3o' (October, 1966). 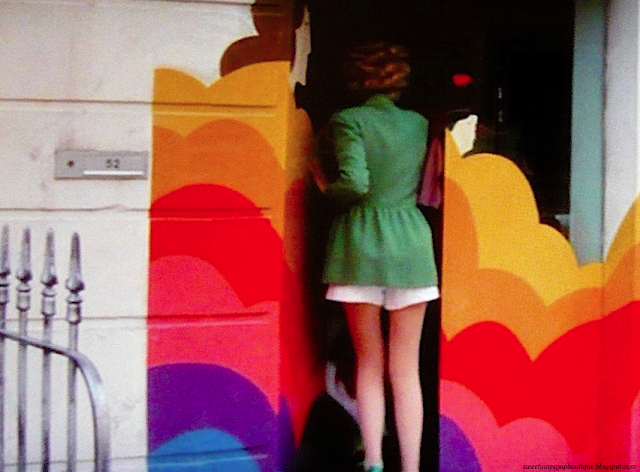 The actress Genevieve Waite entering a Chelsea boutique in a scene from Michael Sarne's 1968 film Joanna. After some further research, and also a direct word with Michael (thanks to Sophia Satchell-Baeza), I believe it's very possible that this is in fact 52 Radnor Walk, which was the location of the second Quorum boutique, as seen in the video clip from 1966 above. 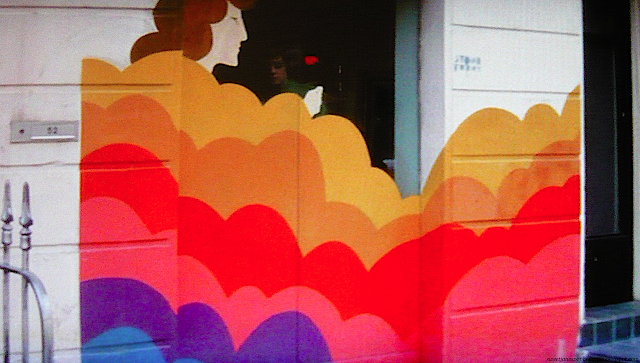 A more detailed look at the painted facade of the boutique as it appeared in Joanna, 1968,  (directed and written by Michael Sarne). And here, you'll find a link to No. 52 Radnor Walk as it looks 'today', the central double-doors have since been removed, and the building has been converted back into a Chelsea residence. 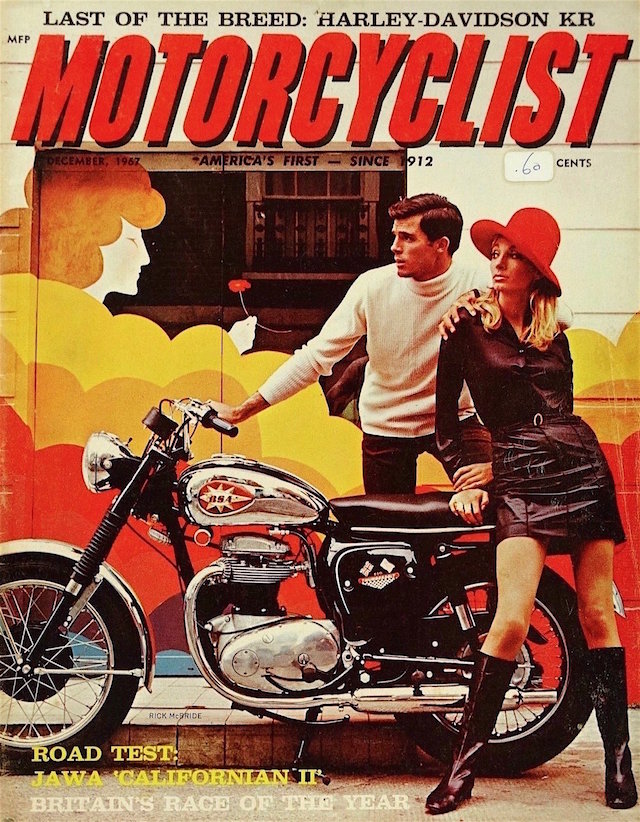 Another image of 52 Radnor Walk, this time, the shop is used as a backdrop in a publicity shoot by photographer Rick McBride for a BSA Motorcycle Ad Campaign, this particular image was also available as a BSA poster. Cover photo: Motorcyclist Magazine, December 1967. Models: The BSA 650cc 1968 Thunderbolt, Jane Solo and Robert Campbell.  Interestingly, Robert Campbell also auditioned for the role of James Bond in 'On Her Majesty’s Secret Service' around this period, making it into the top five candidates. You can view some behind the scenes images of his audition, which were photographed by Loomis Dean for LIFE  Magazine.


BUS STOP
3 Kensington Church Street, W.8.
(and branches at Croydon, Nottingham, Manchester, Birmingham, Glasgow.)
As a designer for a dress manufacturer, Lee Bender felt she was not always able to sell the clothes the public wanted, so she opened Bus Stop three years ago. With her own boutiques, Lee Bender feels it is possible to produce ''instant fashion'', and, relying on her instinctive knowledge of what is right at the time she produces designs which anticipate trends such as the current one for ''granny'' prints and the Forties look. Since she first opened Bus Stop, branches have opened in five areas and the business exports to the U.S. and Europe. 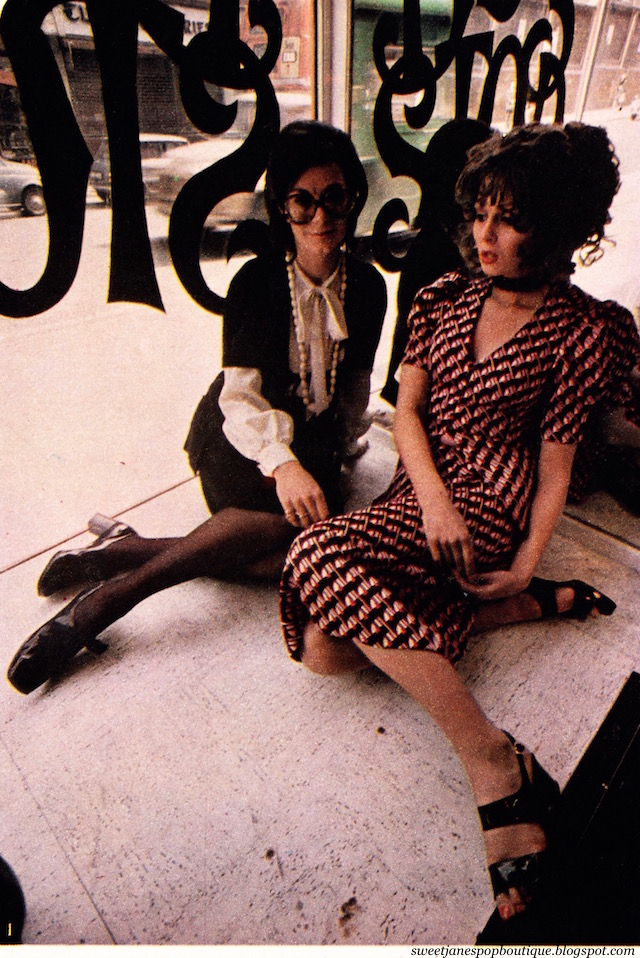 1. Lee Bender in the window of the Kensington boutique. The model wears a Tricel suit with peplum; jet beads 2 gns; Sandals 5 gns from Elliot. Photograph by Duffy. 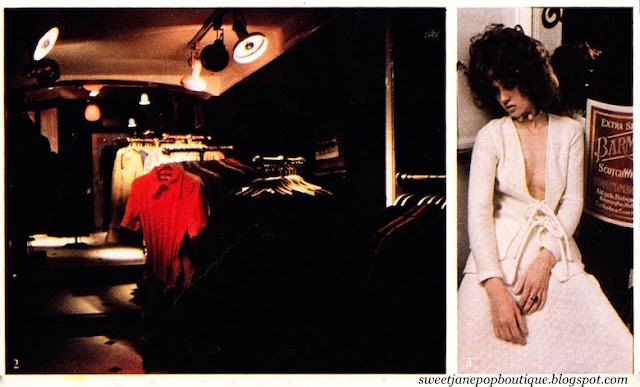 2. An inside photograph of the boutique in Kensington. (3.) Among the old bar and shop signs that are part of the decor, cream knitted suit, £9 10S; tights 10s 11d; beaded choker 21s; Hair by Ivanna at Ricki Burns. Photographs by Duffy.

45 South Molton Street, W1 and 80 Sloane Avenue SW3
The first Marrian-Mcdonnell boutique opened in Sloane Avenue in April 1966. Christopher McDonnell, who had been a fashion editor with Queen magazine, where he met Mary Ann Marrian, designed clothes that were casual but elegant. A wholesale range was produced soon afterwards to meet the demand from other stores, and now the partners export to the U.S and Scandinavia too. In 1968 the second boutique opened in South Molton street, and its success emphasises Christopher's flair for giving a touch of glamour to classic fashion. 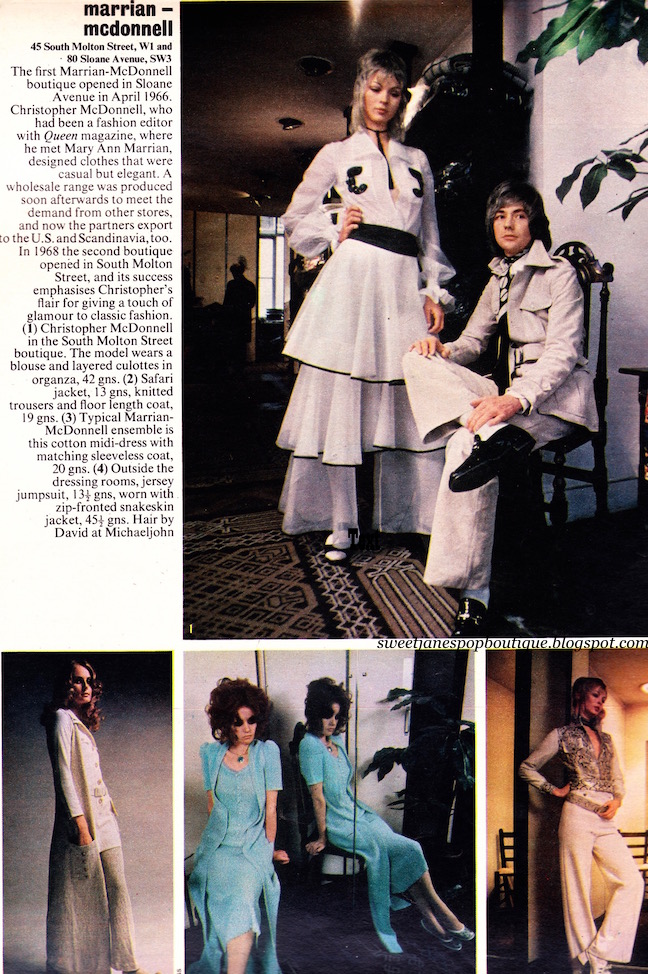 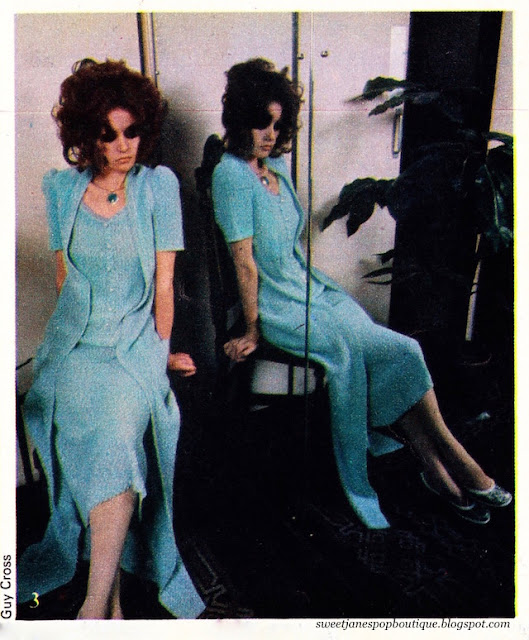 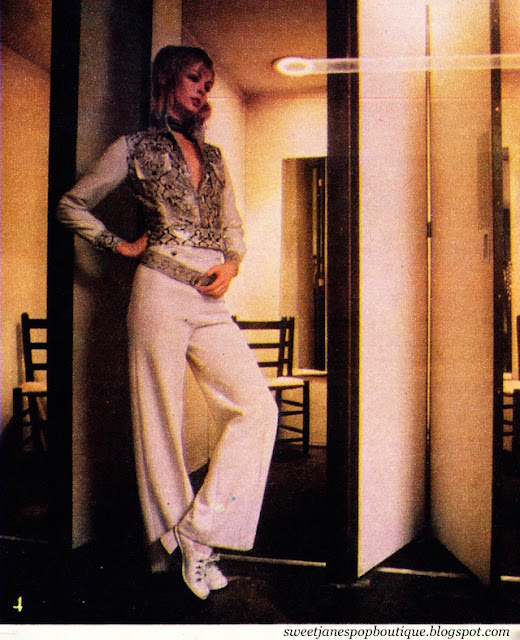 
FOALE AND TUFFIN LTD
1 Marlborough Court W1
Marion Foale and Sally Tuffin spent three years designing clothes under their own label before opening the Foale and Tuffin boutique in 1965. Their designs, often based on history, are still sold to other stores and boutiques in Britain and they export to the U.S. and Europe as well. They design for a relaxed way of life and make clothes they or their friends could wear. 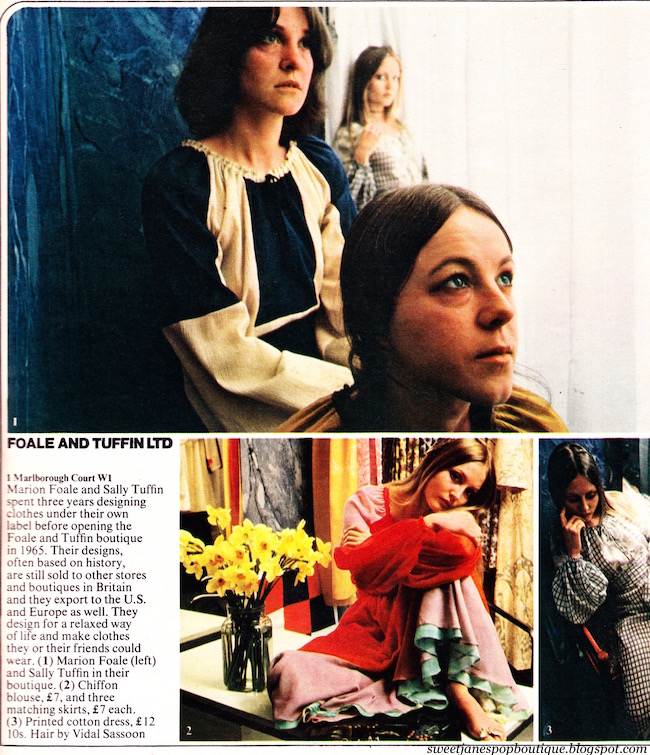 Top 1. Marion Foale (left) and Sally Tuffin in their boutique. Photographed by Duffy.

IMAGE CREDITS & LINKS
All images scanned by Sweet Jane from The Daily Telegraph Magazine (Number 300) July 17th, 1970. Except *Biba Photograph No.2 'on the mezzanine floor' which is a higher quality outtake of the shoot than the one included in the magazine, I scanned this from The Biba Years 1963-1975 by Barbara Hulanicki and Martin Pel. All photographs by Duffy *except N0.4 Biba dress and *No.3 Marrian-McDonnel blue cotton midi-dress ensemble which are credited to New York fashion photographer Guy Cross. Original editorial content by Cherry Twiss. Screenshots of 52 Radnor Walk from Joanna (1968). Vintage December 1967 Motorcyclist Magazine cover image courtesy of nospartsnow. Why not pay a visit to Barbara Hulanicki's website and Official Facebook Page to see what she's been up to lately. And you'll find Lee Bender's website and facebook page here. More about Duffy - the man who shot the sixties. Celia Birtwell on life with Ossie Clark, being friends with David Hockney, and a life in print. Ossie Clark; The King of the King's Road. Some of my previous posts about The British Boutique Boom 1965 (Part 1), and Part 2 here. And finally, "Transient Friends" by the capricious Geneviève Waïte from her 1973 album Romance is on the Rise, the video clip is comprised of footage from Joanna (1968).
Posted by SWEET JANE at 08:15