Lift Up Your Skirt And Fly Boutique Sheffield ┃Jackie Magazine (1969)


LIFT UP YOUR SKIRT AND FLY

Lift Up Your Skirt And Fly, the Sheffield fashion boutique launched in 1967 by local business entrepreneur Roger Howe, has been a source of intrigue to me for quite a while. He was inspired to name the shop after one of Marc Bolan's lyrics from 'Desdemona' the John's Children single which had been released earlier that same year (and then subsequently banned because of it by the BBC, as they considered it to be too controversial). I first came across the boutique in 2009, when I picked up a copy of the excellent King Mojo and Beyond book about the Pop Art scene which sprang up around the legendary Sheffield live music venue. There, on page 39, amongst the club posters, membership cards and murals, were three small images which included an advertisement for the shop and a couple of photographs of Sue Barfield, one of the artists who had painted the facade and designed the interior, while also working as head sales assistant. I've always been curious to know a bit more about it, but apart from one other fantastic photograph taken by JR. James in December 1967, I hadn't managed to find anything else until quite recently. Sometimes these things tend to unravel at their own pace, and purely by chance, it eventually arrived out of the blue via a weekly feature written for Jackie Magazine in 1969 called Around the Boutiques with Sam. It gives a little bit of information about the owner and the back story of how he launched the shop, plus a really great description of the interior and the type of gear that they sold, which you can read all about for yourself in the original article below. 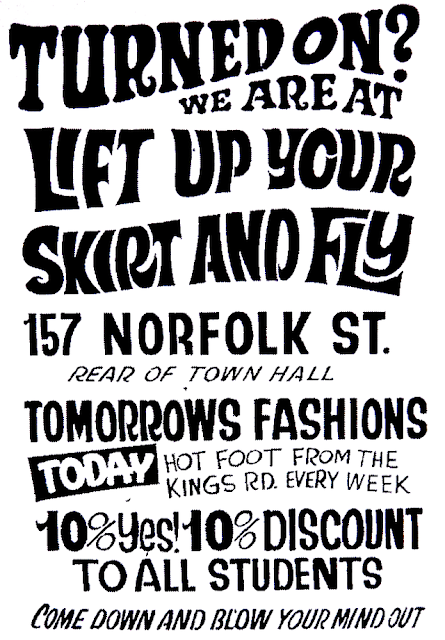 All because John Lennon made a slip of the tongue

Question: What have a cut-price bathroom suite showroom and way-out boutique got in common??! The answer is—tah-rah—a very trendy, go-ahead young man by the name of Roger Howe, who owns both. His main interest, though, is in the boutique at 157 Norfolk Street, Sheffield, called ''Lift Up Your Skirt And Fly.'' ''Ooo!'' I hear you gasp. ''How Suggestive!!'' But keep your hair-piece on. It was all due to a boob made by John Lennon when, in a show, he introduced the song ''Desdemona'' as ''Lift Up Your Skirt And Fly.'' which is a line in the song. That decided Roger to call his boutique the same. What has all this got to do with cut-price baths, then?? Nothing.

A man of many interests is Roger, so he opened the bath business last year as a prosperous sideline. Although he is racing off to London, buying stock for the boutique every week, he still manages to run both enterprises successfully. AND, apart from all that Roger plans to turn the back half of the ''Lift Up Your Skirt And Fly'' into an antique shop. About two years ago, several young ladies were almost arrested for parading around Sheffield's main streets wearing kinky Quorum see-through blouses! VERY DARING!! But it was only a brilliant opening-day publicity stunt, contrived by Roger. With the result, he succeeded in getting the recognition he set out to achieve for the boutique, by his shock tactics! Clever!

There is a sort of Victorian air in ''Lift Up Your Skirt And Fly'' although the music which constantly blows your mind, I'm sure would not amuse Queen Victoria!! The interior of the boutique was creatively designed by head assistant, Sue Barfield, who should know what she's about, after doing a three year design course at Sheffield College of Art. One wall is completely white with a gigantic psychedelic flower decoration. The two deep red walls add to the mysterious atmosphere created by the striking blue tinted window, which takes up the entire front of the shop. The clothes hang on red rails attached to chains suspended from the tiled mirror ceiling.

Everywhere you look there are relics of Victoriana times. A super, huge antique cash register, old but now brightly painted chairs, the same with a chest of drawers and painted-up curly coat stand which some of the most fantastic gear is draped over. The communal changing room is divided at one end by a heavy wine velvet curtain hanging from large white rings on a low, white pole. Old reproductions decorate the deep blue walls along with 1930 pin-up type notelets which  sells for a shilling each.  Although this is the colour scheme now, it may change tomorrow because every time Roger returns from London he not only brings back new clothes but also lots of groovy ideas for interior design, which Sue soon puts into action! ''Lift Up Your Skirt And Fly'' is definitely THE place for Sheffield's turned-on dollies stocking such excellent makes as Ossie Clark, Alice Pollock, Early Bird and Consortium. 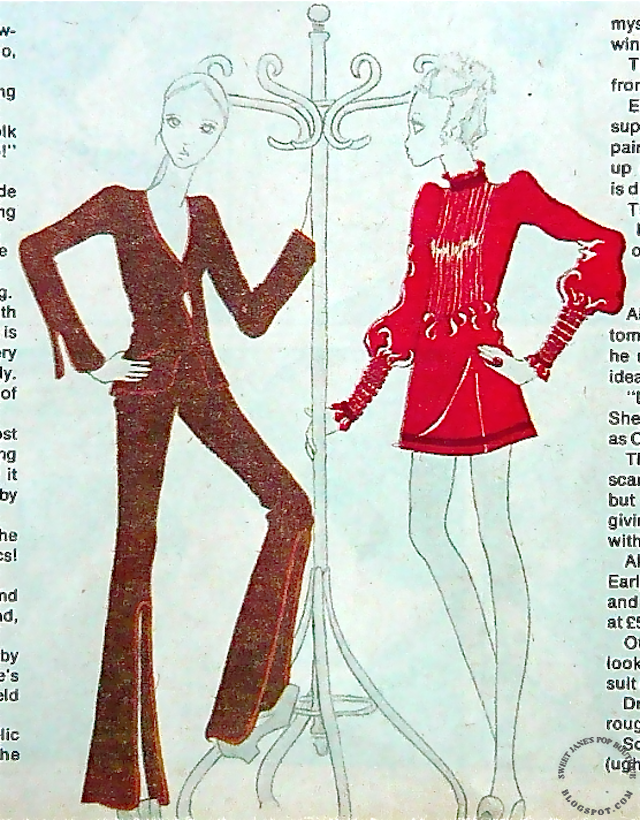 The illustrated trouser suit by Ossie Clark is black crepe with scarlet silk edging and costs £10 10s. A bit pricey perhaps, but so outstanding it's really worth it. The jacket is fitted, giving a very slimming effect and the trousers flare out gently with an edge split from the knee down. Also featured is a gorgeous dolly dress in flame satin by Early Bird with black velvet bands round the gathered cuffs and neck and round the hemline. A bit more economical, this at £5 5s. Other good buys are Ossie Clark blouses for £3 15s which look really soopah teamed with a shocking pink velvet tunic suit by Early Bird £6 19s 6d. Dresses range from as little as £3 to £7 and trousers at roughly £5 5s.

The black crepe trouser suit illustrated above is featured in this episode of the German TV series Der Kommissar, it's modelled by Pattie Boyd at approximately 1:50 into the clip, along with several other Ossie Clark designs throughout, which are again modelled by Pattie and some more very well known models, including Amanda Lear and Kari Ann Muller. 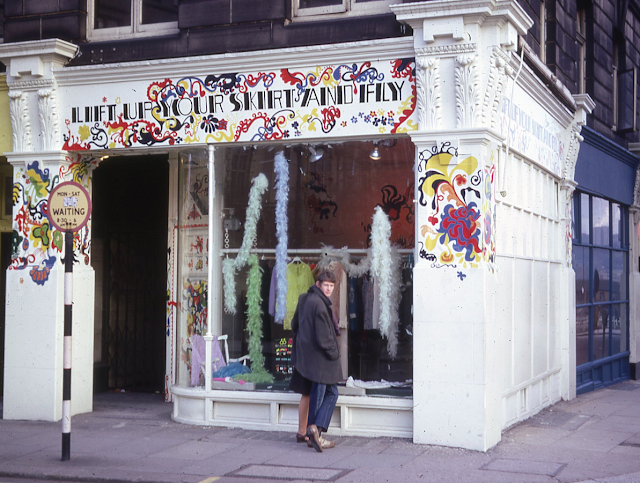 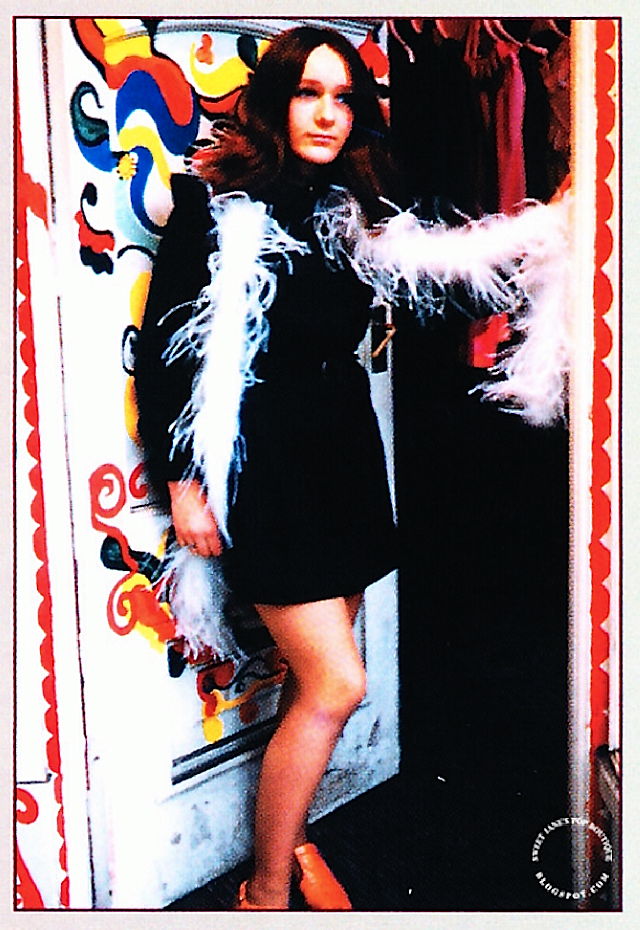 Sue Barfield at the entrance to Lift Up Your Skirt and Fly on Norfolk Street, Sheffield. 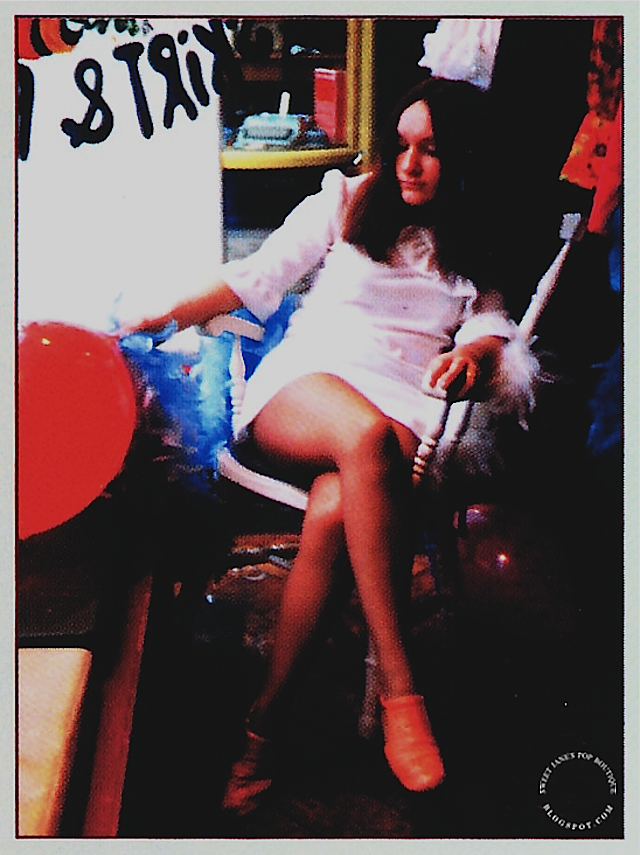 Another photograph of Sue Barfield taken inside the boutique.

Posted by SWEET JANE at 10:15 2 comments: Links to this post

Yet another fantastic advert for the Woolworth's Baby Doll cosmetics range, this one is a double page measuring approximately 20¼'' x 13½'' from Jackie Magazine, 1969. You can view some more examples of my previous Baby Doll Advert posts via the links at the end of the page. 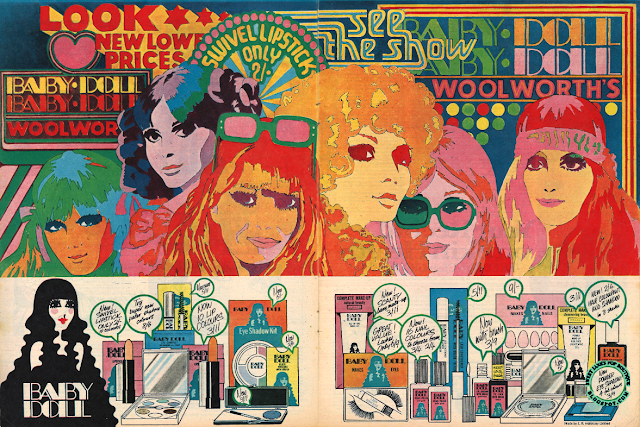 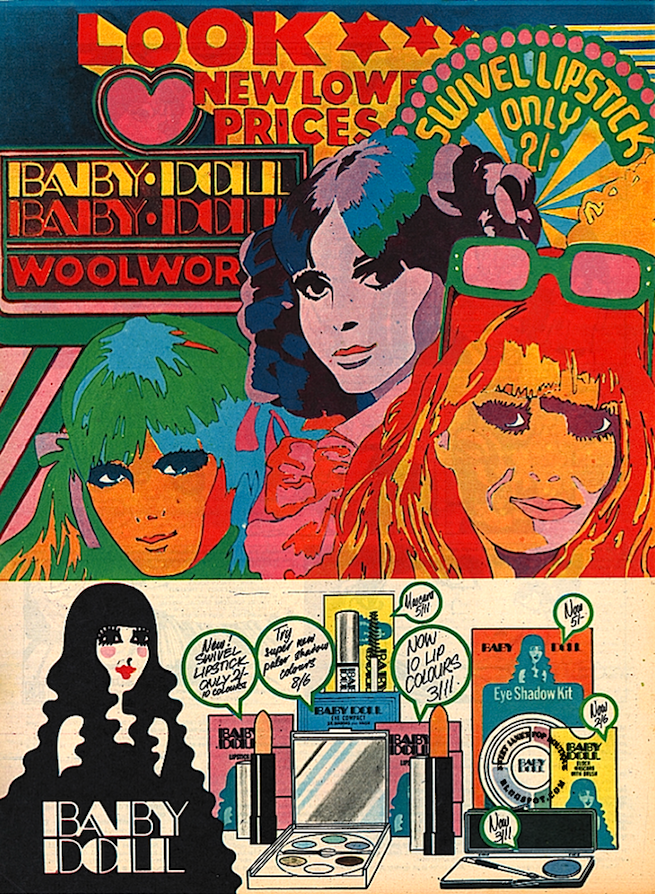 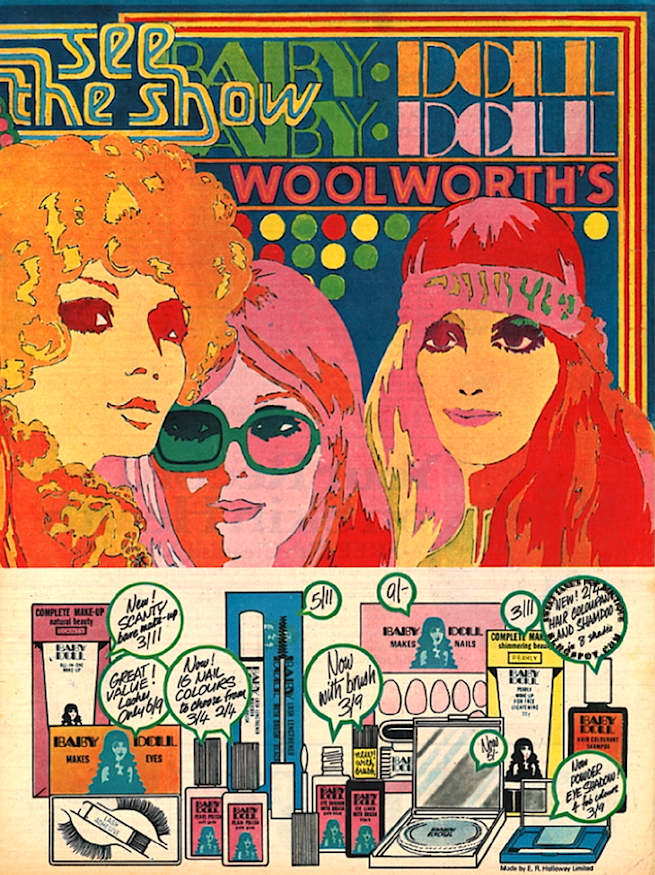 IMAGE CREDITS & LINKS
All images scanned by Sweet Jane from Jackie Magazine, February 15th, 1969 (artist uncredited). Discover more about the Baby Doll Range over at the Woolworth's Museum archive here, view some of my previous Baby Doll Make-Up adverts here, and also here. Take another trip down memory lane via Woolworth's adverts of Christmas past here. And finally, the Fans of Jackie Magazine UK group.

Posted by SWEET JANE at 12:01 No comments: Links to this post