If you were to browse through the men's fashion section of every other issue of Rave magazine from the mid 1960s onwards, I guarantee,  you would soon notice that the names Stephen Topper and Topper Shoes show up one after the other on a fairly regular basis. Much favoured by stylish young men about town, Topper Shoes were without a doubt one of the most happening footwear brands of the era. The clientele list included members of the British pop hierarchy such as The Rolling Stones, The Small Faces and The Who, as well as visiting international acts like Bob Dylan and Johnny Halliday...and yet, they seem to have 'almost' vanished from history. At this point in time, there is barely a trace of their legacy to be found online, apart from inclusion in the occasional Carnaby Street reference and a couple of interesting threads posted on 1960s/1970s style forums. Although in fairness, they have been name checked in several books and slightly elaborated upon in others through the personal stories of former customers, but there is no definitive account of the brand's heritage or any archival examples available all in one place that I am currently aware of.

Topper shoes were already well established by the early 1960s, with three branches in London, the first shop opening at 57 Shaftesbury Avenue in W1 in 1953, the others located at 68 Queensway in W2., and at 34 Coventry Street. But they really came into their own when 18 year old Stephen Topper, the owner's son, took the reins and headed for Carnaby Street. I don't have an exact date, but he was definitely trading there by 1965, however, the earliest reference that i've come across in print from my personal magazine collection dates back to the 'London Swings' issue of Rave magazine from April 1966, when 'Topper Shoes' located at 45 Carnaby St is landmarked in the poptastic illustrated Raver's Map of London, along with a brief description of the shop on the next page.

By the following year they were featured in Gear Guide―A hip-pocket guide to Britain's Swinging Fashion Scene, and while still brief, it does give a more detailed account of how things were progressing.  There were now two Topper Shoe shops on Carnaby Street, they were still at No.45 but also had a branch at No.9. The first one catered for Men only, it was open 9.00 am to 6.o0 pm from Monday to Saturday (late night shopping until 7.00 pm on Thursday and Friday), with the range costing between three pounds to ten Guineas.  The other shop at No.9 had a 'beautifully cool interior in weird purply shades', it kept the same opening hours as the previous one, but catered for Girls and Men. I've never seen any examples of their Girls shoes but apparently they had a wide and original range which cost from three pounds to five pounds-fifteen for shoes, and from ninety-nine-and-elevenpence to seven pounds-nineteen and six for boots! All of the collections—which perfectly complimented the latest clothing for sale on the street, were designed by Stephen Topper himself, and manufactured to a high standard in France and Italy.

According to Tom Salter's book about Carnaby Street, there were a total of five Topper shoe shops operating in 1970...I'm assuming that he is referring to the original three that I have mentioned plus the last two..but then again, maybe not, perhaps some of the originals had closed and there were more branches in Carnaby Street or at new locations! It also says that the owner was a chap called 'Monty Stewart'...So, Topper was merely a business name rather than the actual family surname. While researching material for this post I came across a photograph of another branch at 146 Markham Street in SW3 (undated) and also a piece of film footage which features a Topper Shoe shop located on the King's Road circa 1977 but unfortunately the trail runs cold after that, which leads me back to my original question...Whatever happened to Stephen Topper and Topper Shoes? 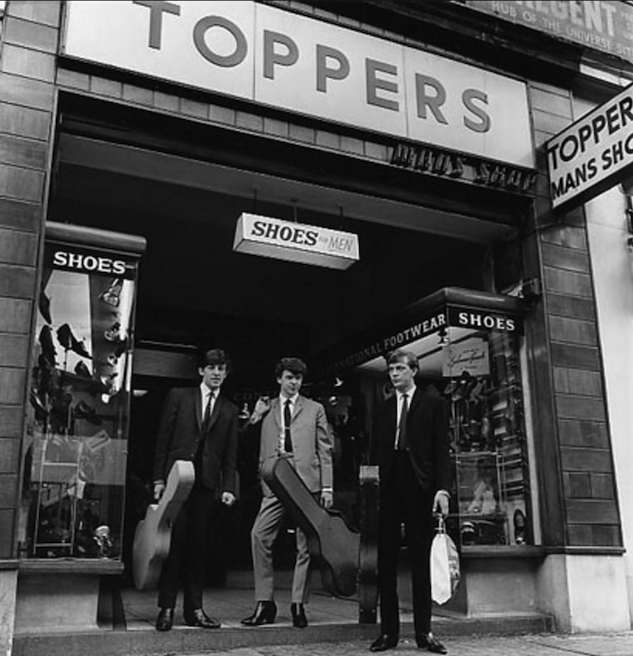 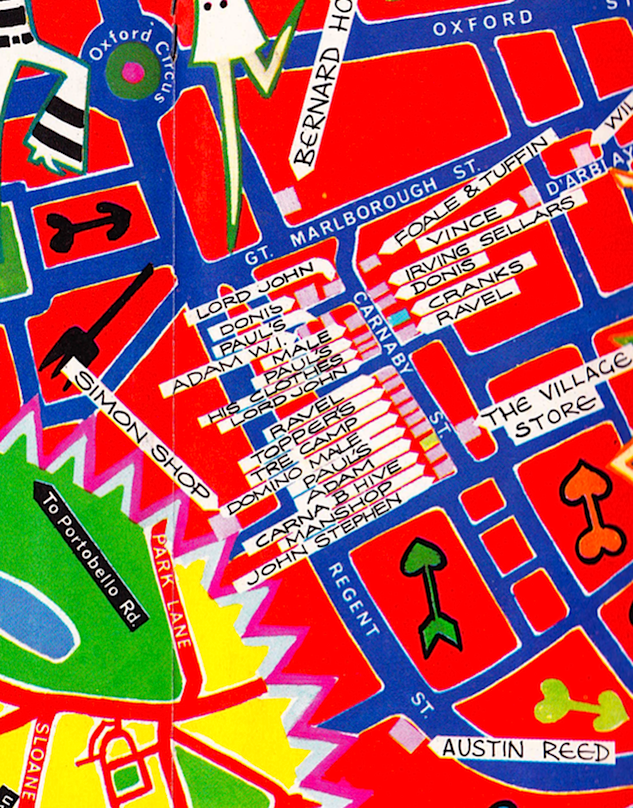 A close-up of the Raver's map. And according to this, Topper Shoes—located at number 45 Carnaby Street, is situated between John Stephen's Tre Camp (No.46) and Ravel (No.44), but in reality it was actually between Inderwicks the Tobacconist & Pipe Specialist on the left and Ravel on the right. (Rave, April 1966). 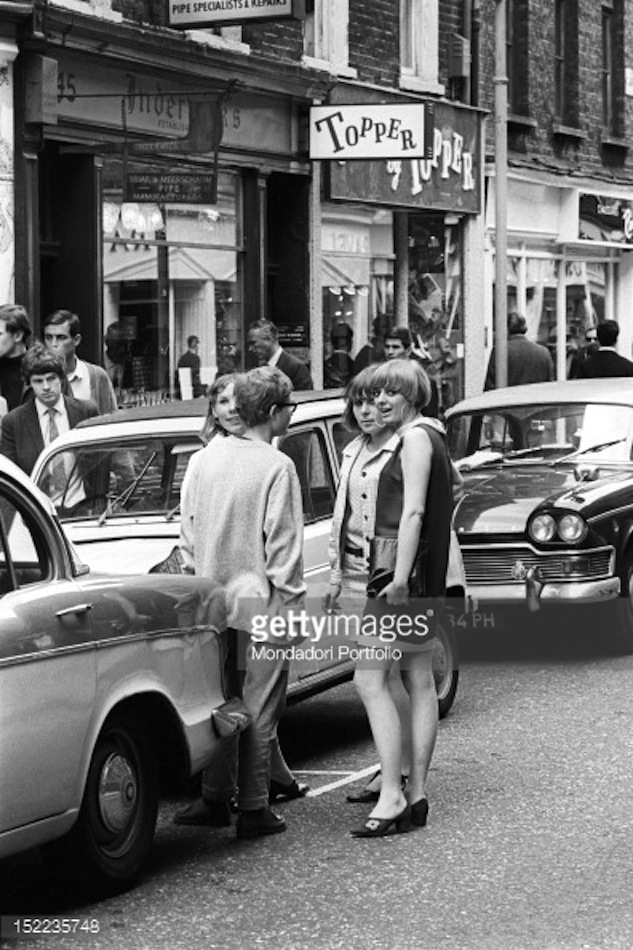 A rare photograph of the Topper shop facade at 45 Carnaby Street, you can just about see Ravel, but the door on the left is clearly Inderwicks the tobacconist shop, which intriguingly also seems to be located at number 45 Carnaby St! (perhaps it was an a&b situation). Photograph © Mario de Biasi/Mondadori Portfolio via Getty Images. (1966) 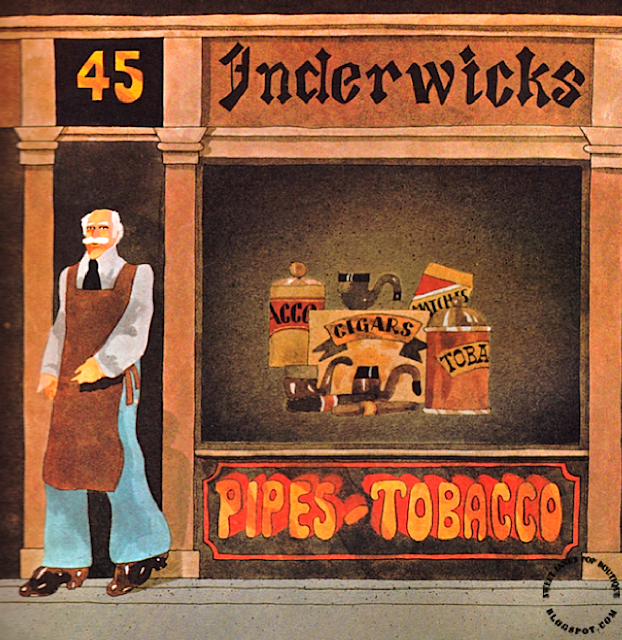 Inderwicks, the Pipes & Tobacco Specialist at 45 Carnaby St, illustrated by Malcolm English for Tom Salter's Carnaby Street book in 1970. The company was founded in 1797 by John Inderwick, and the original shop located on Wardour Street was one of the earliest tobacconists in London. They may have seemed out of place in the midst of the Carnaby St pop explosion but stayed put nevertheless, resisting several tempting offers on their lease throughout this period. The pop revolution actually enhanced their business rather threaten it, as curious Carnaby St shoppers spilled off the busy pavement and ventured inside to buy their specialist tobacco blends, cigarettes and the long clay Churchwardens, Corncobs and Meerschaum pipes which they had been selling for 170 years. Above Inderwicks was the very first Aristos Boutique, it comprised of two rooms on the first floor, a small shop area in the front and a workroom in the back, in which Constantinou Aristos ran up garments for girls. The son of a master tailor, he had graduated from the London College of Fashion in 1965 and with the profits from the fledgling boutique he soon opened up his second shop named Blooshp at 45 Newburgh Street, W1. He was eventually joined in the business by his younger brother Achillea, the two went on to expand the company, later renaming it Ariella in 1971. Bob Dylan photographed by Barry Feinstein, trying on shoes in Topper's (1966). He was at the end of a world tour at this point in time, playing The Royal Albert Hall twice while in London on May 26th & May 27th, so this was more than likely taken sometime on or around those dates. There seems to be a wall of fame in the background, perhaps made up of other well known celebrity customers, included are The Who on Bob's immediate left, unmistakable in their pop art regalia. 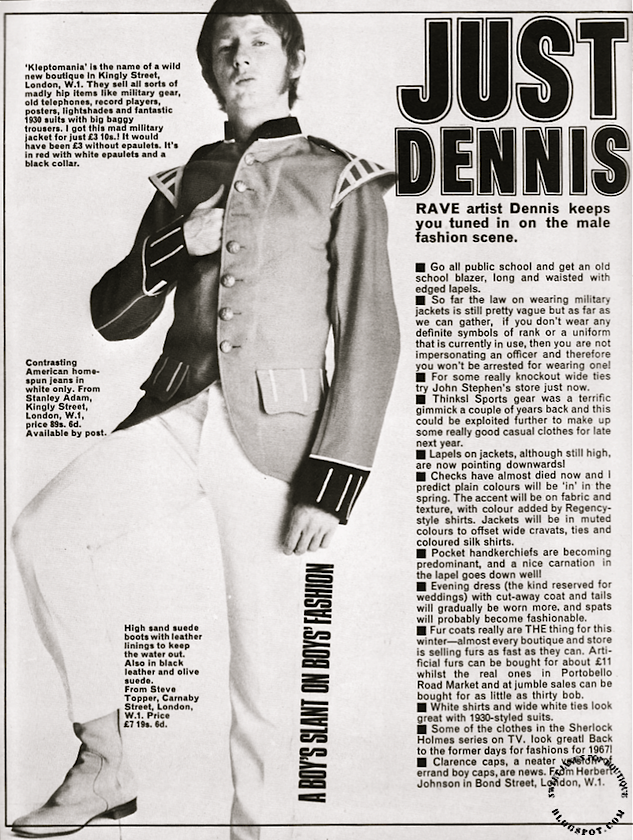 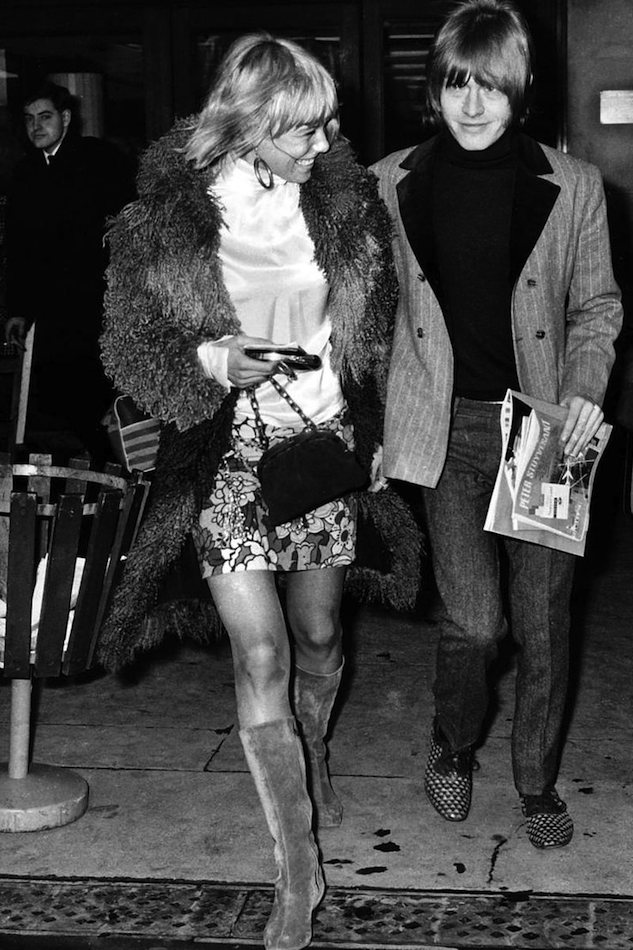 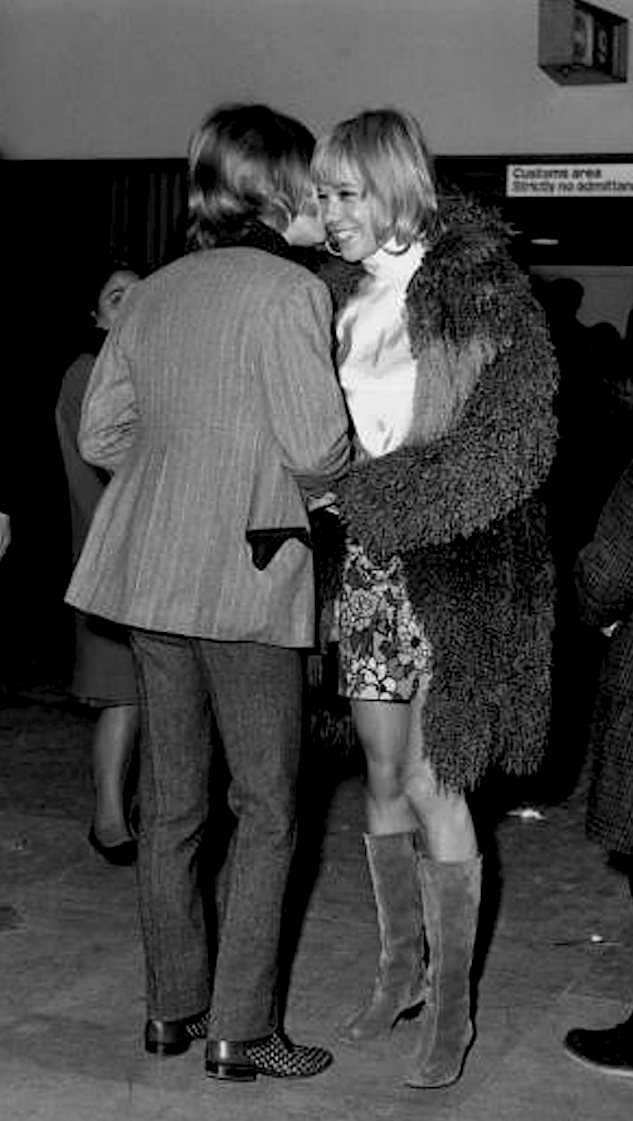 The side and back view of Brian's two tone basket weave lace-ups by Topper, December 3rd, 1966. 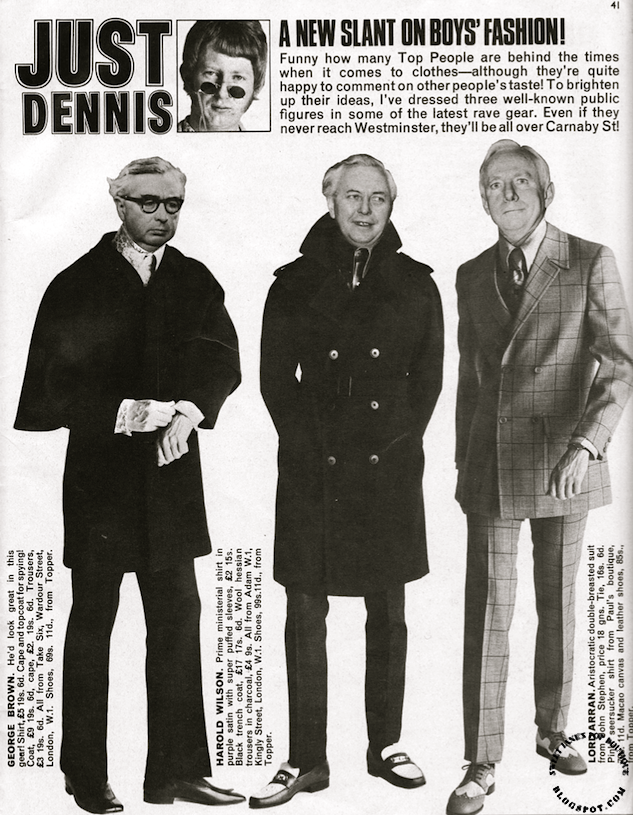 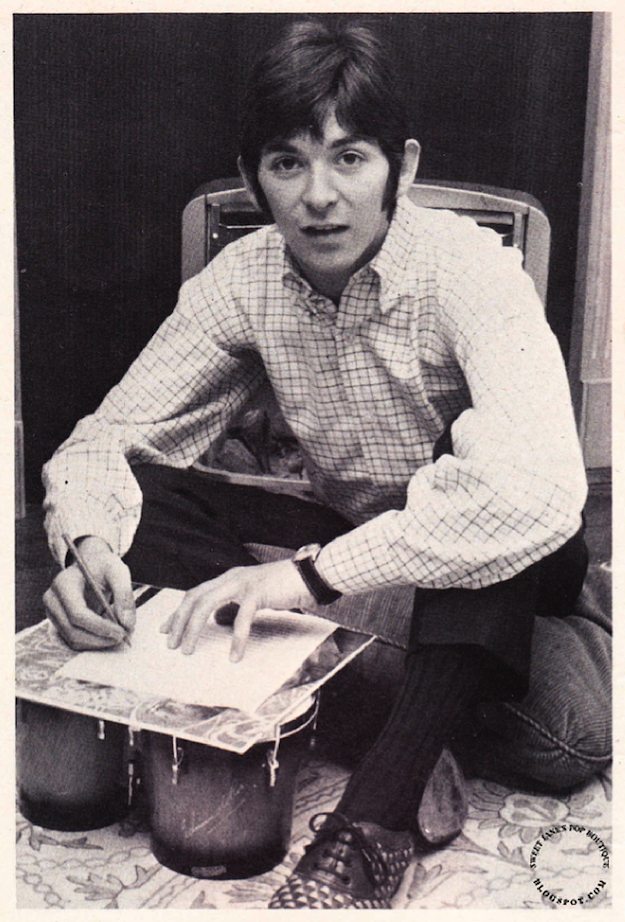 Ian McLagan of The Small Faces photographed at home for an article in Rave, he's wearing the same style of basket weave laced-up shoe from Topper of Carnaby Street that Brian Jones has on in the previous photos above. (Rave, April 1967). 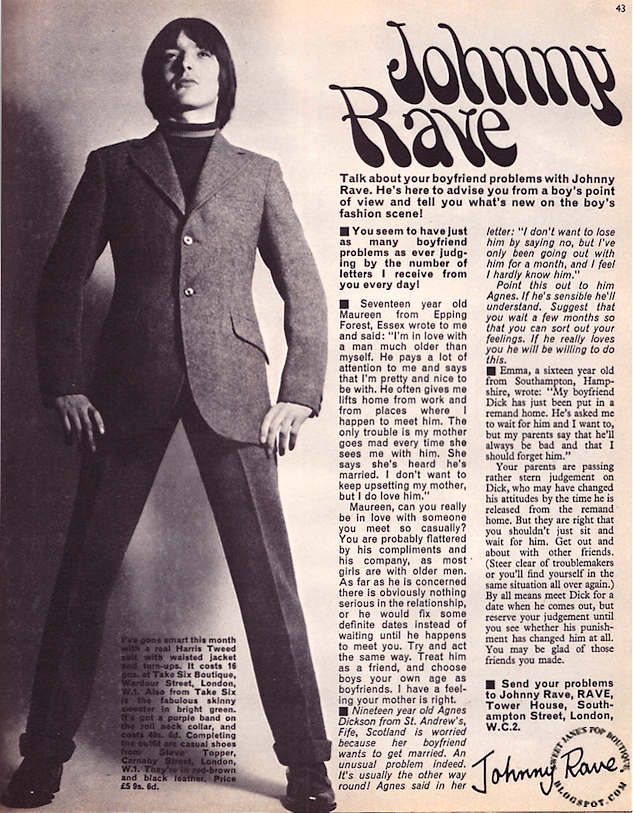 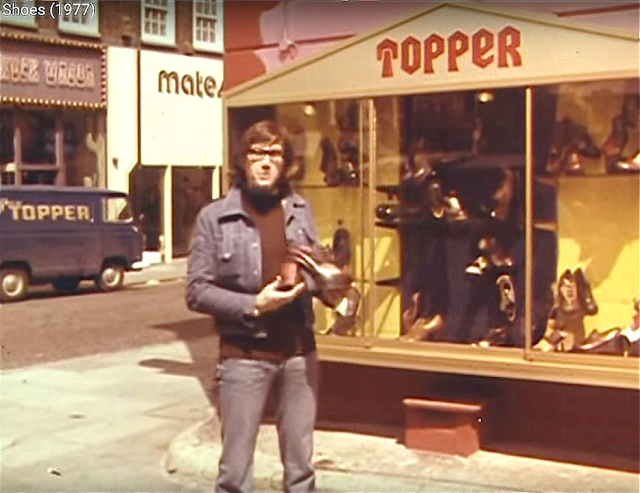 The facade of another Topper shoe shop, which was included in a short news report for Thames Television in 1977 about the 'health concerns' associated with the fashion fad for wearing platform shoes. I'm not sure of the exact address of this branch at this point in time, but I think this is most likely the side view of the building rather than the main entrance, which was located somewhere on the King's Road. The precise number of the shop could be close to 59b, which is seen on a door above the interviewer for a couple of seconds during the filming. I can't quite make out the name on the premises behind the Topper van opposite, but just beyond, is a branch of Irvine Sellars' Mates boutique. Several interviews take place throughout the footage, there is one in particular filmed right outside Topper's with a young chap who seems to be fairly knowledgeable about the customer base, quite possibly a sales assistant or the manager of the shop. I've also included a link to some footage of outtakes from the same film at the end of this post, which provide excellent examples of popular street footwear and fashions of the time (lots of platform shoes, boots and wedged heels worn with flares, maxis and minis). However, there is some discrepancy regarding the correct date via Pathé, who have credited it as 1970 this time round, rather than 1977.

After some further research, I have recently discovered that the side window view of Topper Shoes in the photograph above, is located at 59B Wellington Square, just off the King's road. The shop makes a brief appearance in a Fashion Report about Menswear made for Spanish Television in 1973. I've included a couple of screenshots from it below. 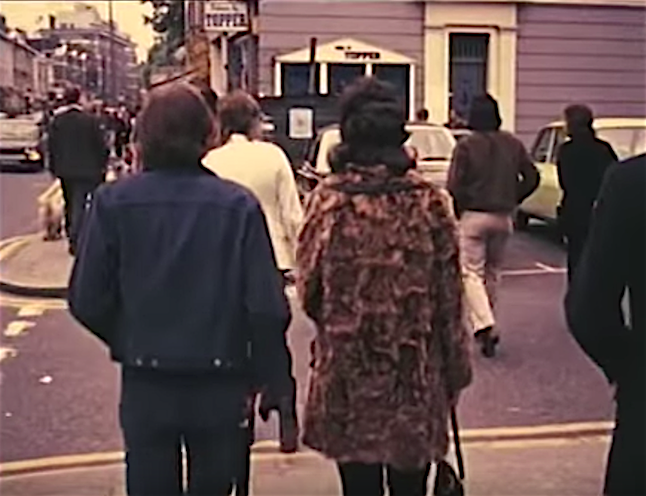 Another view of Topper Shoes at the same 59 King's Road/59b Wellington Square location, this screen shot is from  Mary Quant - Una Donna un Paese, a programme made for Italian Television in 1972, which includes lots of footage filmed around Chelsea and the King's Road.

A short news report for Thames Television in 1977 about the 'health concerns' associated with the fashion fad for wearing platform shoes, the interview is filmed outside Topper Shoes at 59 Wellington Square, off the King's Road.

It has recently been brought to my attention that Topper Shoes on the King's Road makes an appearance in the promotional video for Nobody Told Me which is available on Lennon Legend: The Very Best of John Lennon (DVD). I've added a couple of screenshots from the footage below. Post Updated: 07/09/2019.

Topper Shoes on the corner of the Kings Road and Wellington Square can be seen in the background towards the end of the footage at 3:02 in this promotional video for  Nobody Told Me by John Lennon. (Recorded in 1980, Released 1984). The video, edited from newly transferred footage and out-takes from John & Yoko's "Imagine" film and other previously unseen material is available on Lennon Legend: The Very Best of John Lennon.


LINKS & FURTHER READING
Watch 'Eat The Document' a documentary film of Bob Dylan's 1966 tour of the United Kingdom directed by D.A. Pennebaker. View the aforementioned outtakes from the Thames Television 'Platform Shoes' news report. A review of Sympathy for the Devil - The birth of the Rolling Stones and the death of Brian Jones. Here, you'll find an example of an Inderwicks Shell Bulldog Pipe. Participate in the Mod to Suedehead thread on Styleforum here. Visit the Sixties City website. Nobody Expects the Sartorial Inquisition —a pair of Topper shoes featured in 'The French Cut' article over on Film Noir Buff. Discover more about the early years of Ariella. Whatever Happened to The Likely Lads?.  And finally, The Buzzcocks also wanna know Whatever Happened to? (well, quite a lot of stuff actually!).