Pennywise | The fashion boutiques where you get the best - for less!┃Loving Magazine (1972)


Pennywise: The fashion boutiques where you get the best - for less! 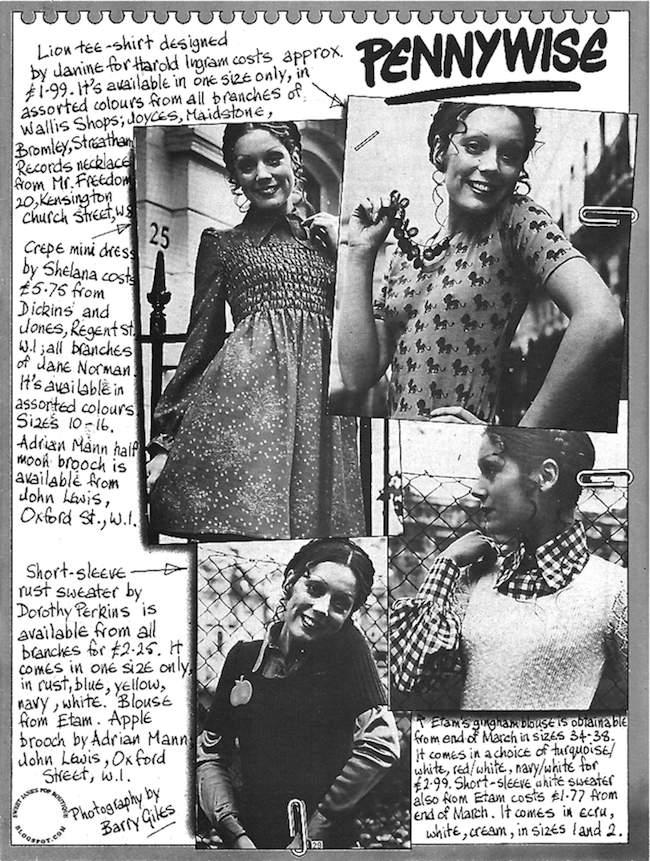 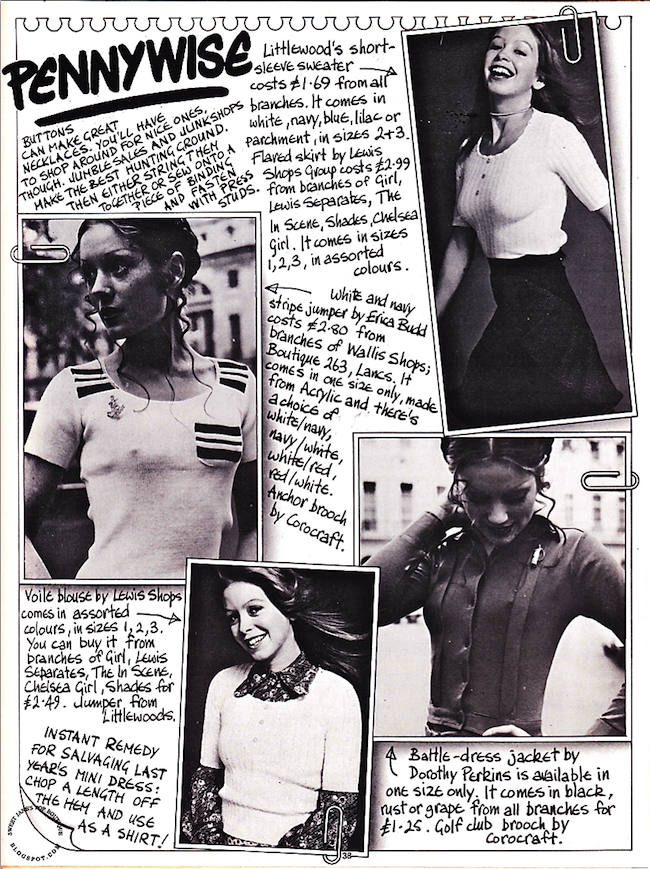 IMAGE CREDIT & LINKS.
All images scanned by Sweet Jane from LOVING Magazine 5th February 1972 & 12th February 1972 with thanks to Kirstin Sibley, Original Fashion feature by Penny Saunders, Photography by Barry Giles. Models uncredited but the girl in the first feature reminds me of a very young Lorraine Chase. View some more of my previous 1970s fashion posts here and also here. You'll find The 1970s [Episode One: Get it On 1970-1972] a BBC documentary here. And finally, She's so 1970s ..She's a Modern Girl here.
Posted by SWEET JANE at 11:47 No comments: Links to this post

I'm loving this Aubrey Beardsley feature originally published in Plexus issue No.12 (the French erotic art magazine) around two years after the first major retrospective of his work organised by Brian Reade had taken place at the Victoria and Albert Museum in 1966. The illustrations were chosen from a selection of the exhibited work reproduced by Reade, who was also the V&A's Deputy Keeper at the department of prints and drawings at the time, from his book published by Studio Vista (London) in 1967. I am particularly enamoured with the colour plates, various shades of a pink and orange theme feature consistently on many other pages throughout this entire Plexus issue, so I doubt if they are representative of the colour published in the book itself. Speaking of which, the pink has turned out fairly accurately but the orange has deepened by a couple of shades in the scanning process. In reality, it's much lighter, almost fluorescent! I've translated the accompanying text from French to English via Google, and I hope that it too still bears some resemblance to the original!

Art posters, psychedelic art, the art of femmes-fleur, this new art which comes to us from young America, from the East Village and Haight Ashbury in San Francisco, has it's origins in three great ancestors: Hieronymus Bosch for the fantastic, William Blake for mysticism and Aubrey Beardsley for eroticism. On both sides of the Atlantic the new romanticism is inspired by the 1900's and many of the artists that we publish in Plexus by their own account, have clearly discovered Beardsley for themselves. The career of Aubrey Beardsley (born in 1872) was brief, he died at the age of 25 at the Cosmopolitan  Hotel in Menton, where he had arrived a few months earlier, hoping to use the Mediterranean climate to fight a little longer against tuberculosis from which he had suffered since the age of seven. After his demise, the public either ignored or quickly forgot his name but although his career was short lived, it was sufficient enough to influence several generations of artists. According to Beardsley, he wanted to paint but his fragile health never allowed him to truly deliver this passion, apart from two oil paintings, which are beautiful indeed, and suggest that although a  great painter was lost, but a great designer remains. The works of Beardsley, are essentially illustrations commissioned for luxury editions of other works in vogue at the end of the century; Salome by Oscar Wilde, Aristophanes' Lysistrata, Volpone by Ben Jonson, Juvenal's poems and the Tales of Poe etc. Beardsley became famous overnight when a magazine, The Studio, published one of the drawings that he had devised for Salome. This drawing entitled ''I kissed your mouth, Jokanaan'' represented Salome kissing the severed head of John the Baptist, needless to say that puritan England was shocked, finding the talent an excuse for sacrilegious audacity. That was in 1893. Beardsley, at 20 years old was a London personality, he led the life of a fin de siécle dandy, in brilliant salons and fashionable places. In five years until spring 1898, when he died, Aubrey Beardsley never ceased responding to commands from publishers even when he was sacked from his role as Art Editor of The Yellow Book, the magazine he co-founded, which promoted the best artists and writers of the time.  In 1966, a large retrospective first presented in London (Victoria and Albert Museum) and then New York (Gallery of Modern Art), brought together more than five hundred drawings selected from the best, which showed the extent of the work over a five year period along with the technique and the richness of the imagination of the young artist. The art critic Brian Reade (renowned Beardsley scholar) has recently published the majority of drawings he selected for these exhibitions in a book entitled, Aubrey Beardsley, by Studio Vista, London. 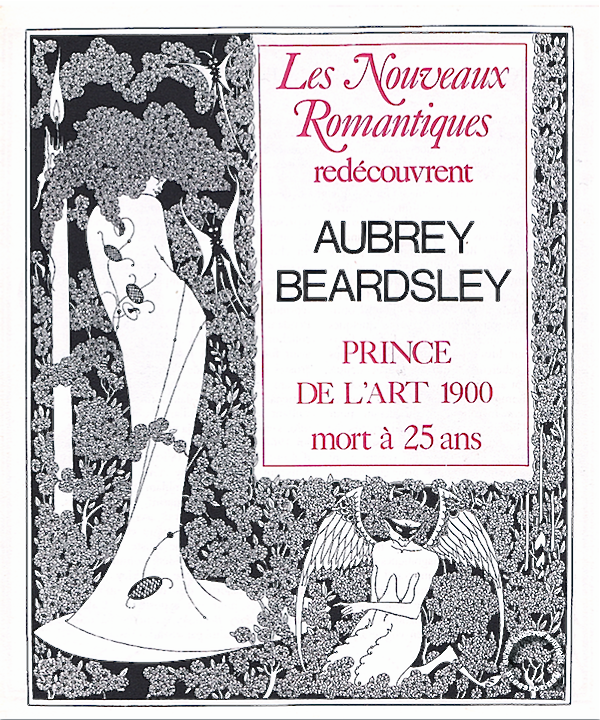 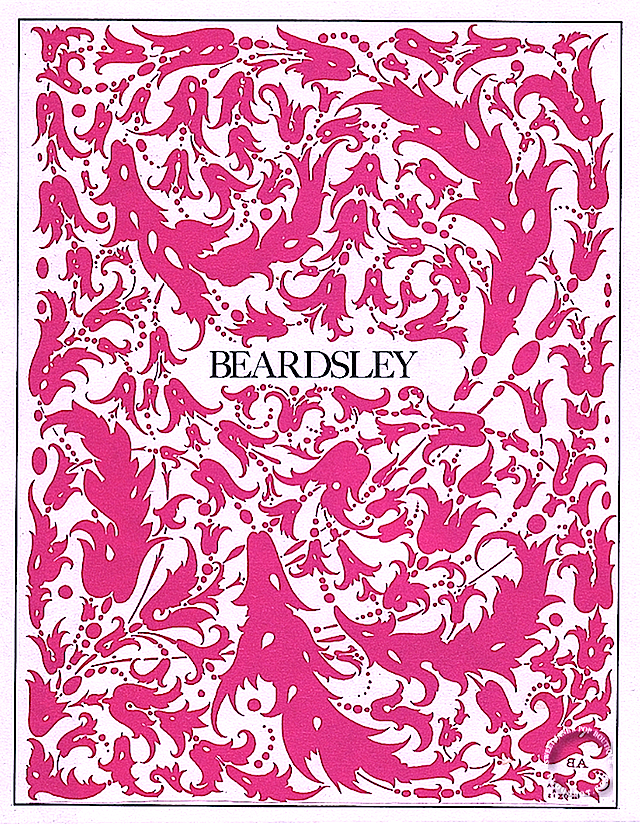 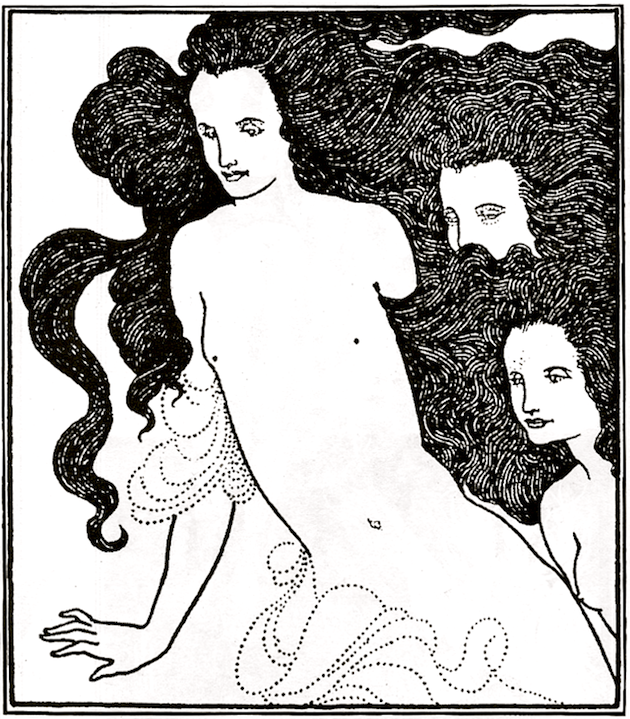 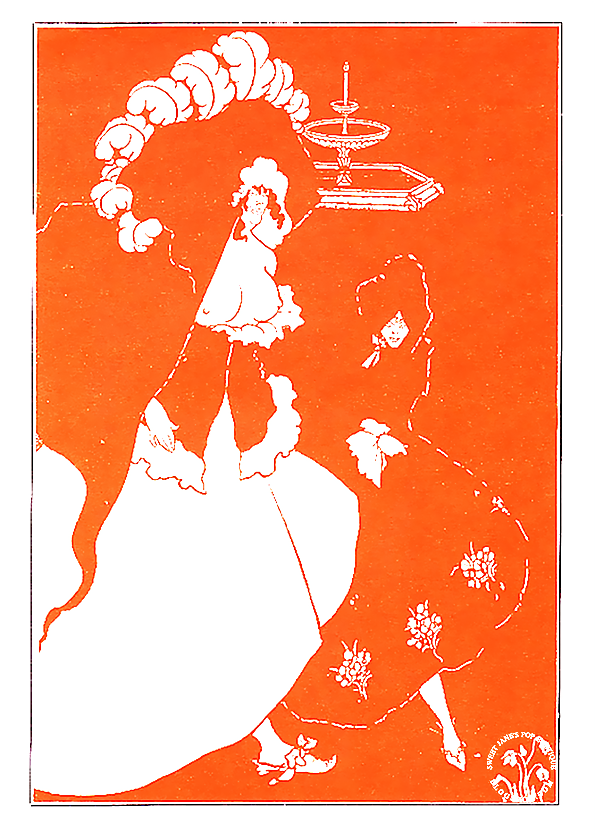 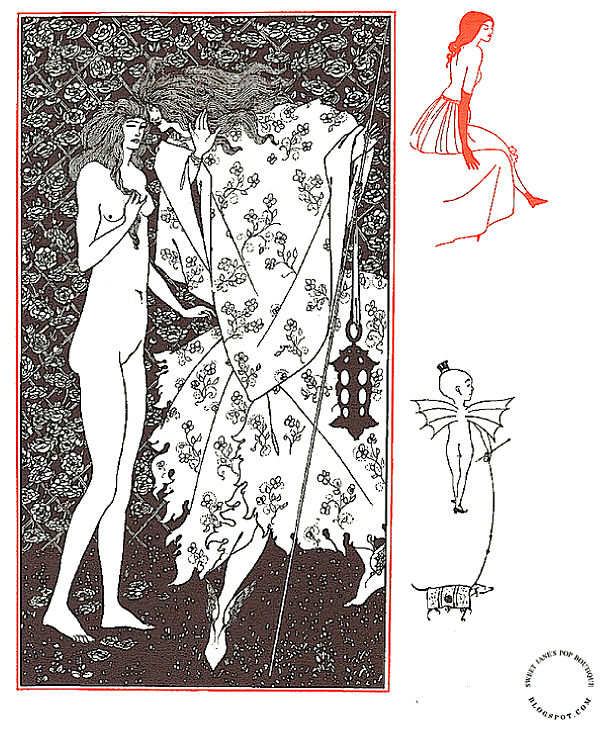 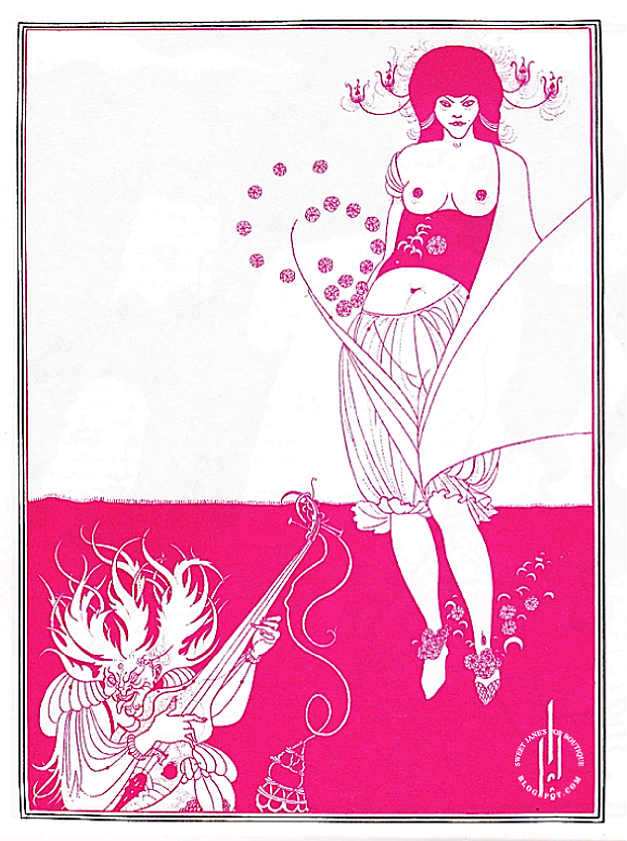 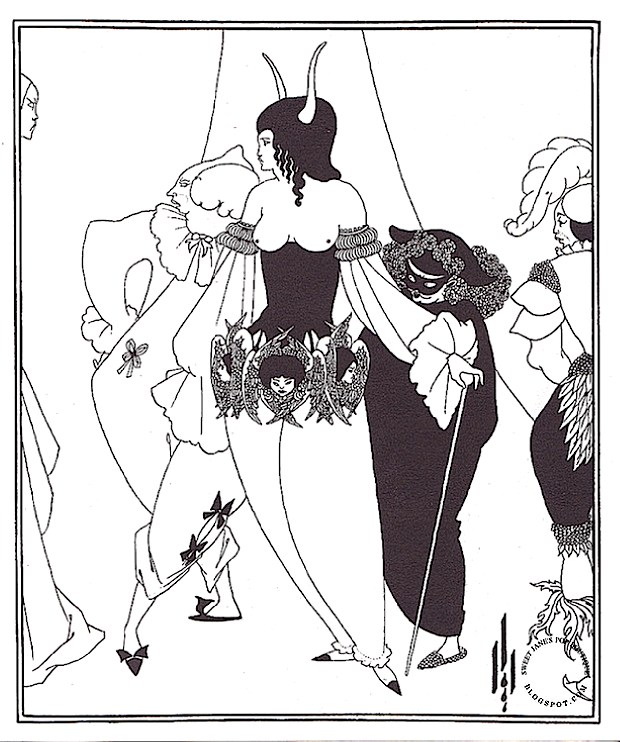 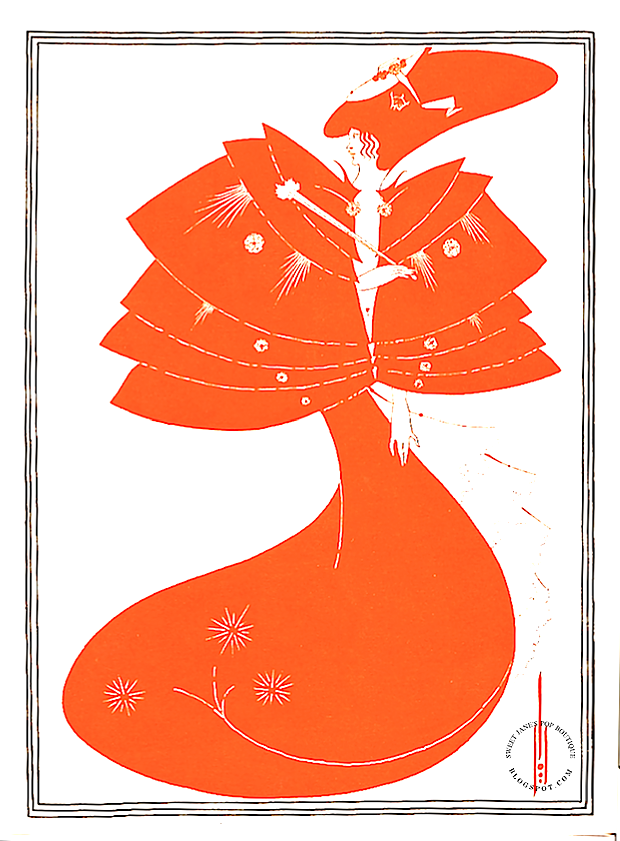 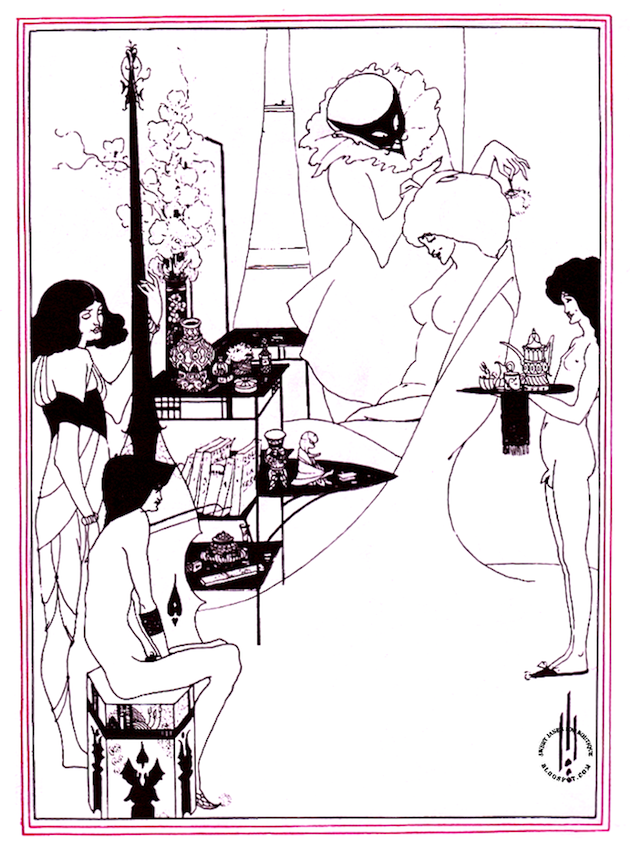 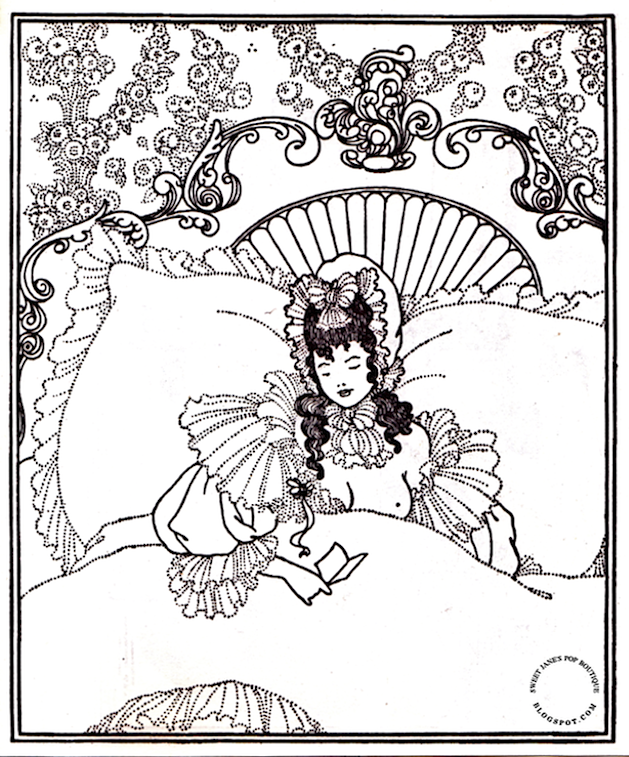 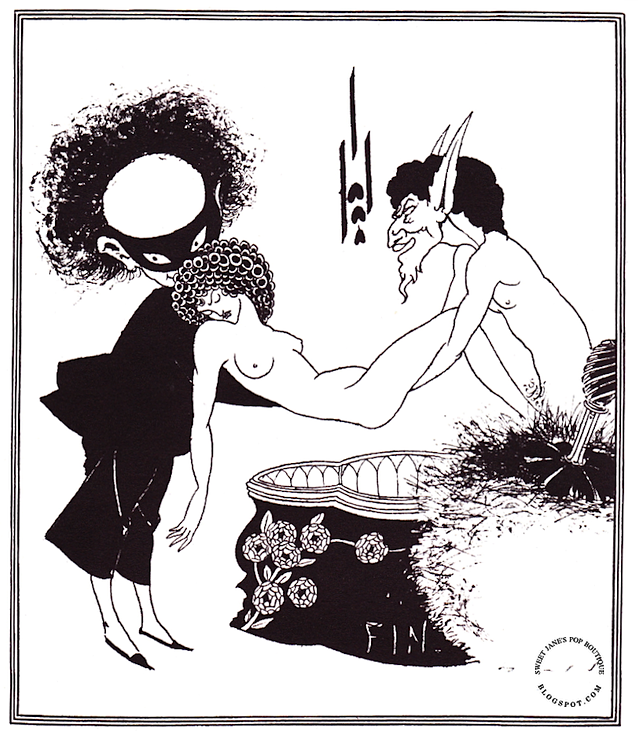 Posted by SWEET JANE at 13:08 3 comments: Links to this post

How much is a Beatle worth?┃Rave Magazine (1966)

HOW MUCH IS A BEATLE WORTH?

Only you know how much they mean to you personally. But here's how much they're worth financially...The Beatles are willing to talk about most things in their lives-except money, probably because they don't even know how much they've got! Here, RAVE attempts to unveil one of the biggest secrets in pop, with an exclusive breakdown on Beatle wealth. 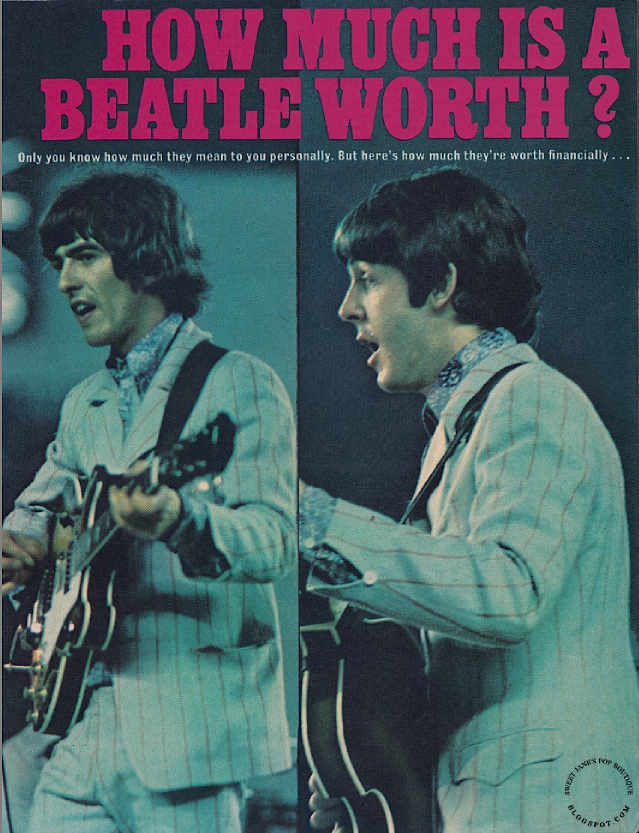 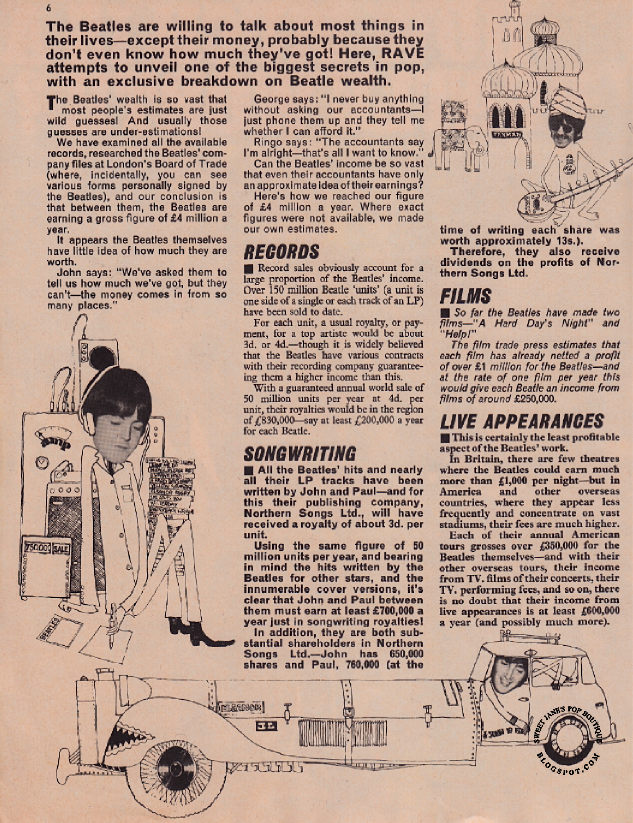 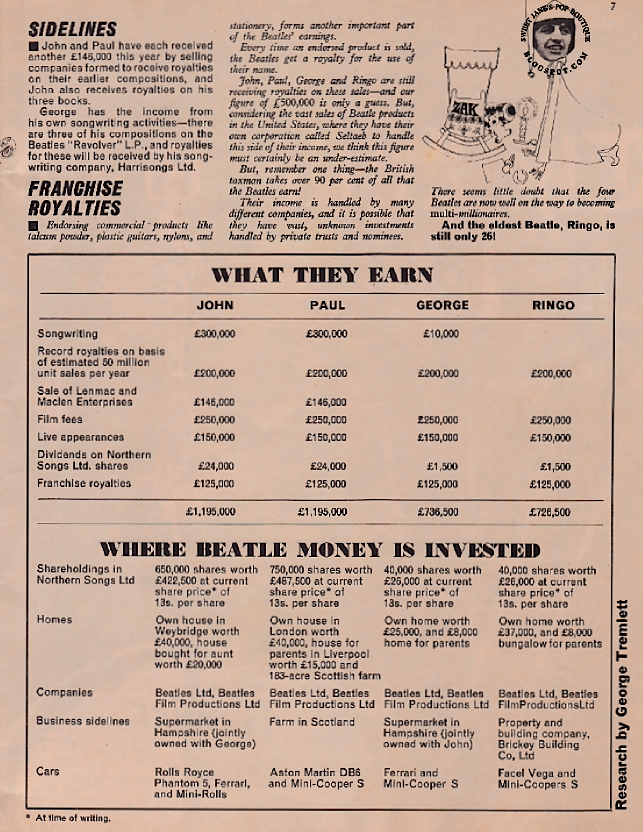 IMAGE CREDIT & LINKS
All images scanned by Sweet Jane from RAVE Magazine, December 1966, all original research material for the article by George Tremlett. Discover more about Taxman, the opening track on the Beatles' 1966 Revolver album here. Read about The Beatles' foray into retail via Apple Boutique & The Fool Design Collective in one of my previous posts here, You Never Give Me Your Money - a lament about The Beatles' business wranglings of early 1969 here. Further information about Dandie Fashions & Apple Tailoring located at 161 Kings Road here. View the interior of 161 as it is today & more, on The King's Road Music & Fashion Trail here. And finally, read about Leslie Cavendish, the Vidal Sassoon trained stylist who ran the Beatles' Hairdressing Salon in the basement of Apple Tailoring here.

Posted by SWEET JANE at 07:51 No comments: Links to this post