A six page 'boutique fashion' editorial featuring clothing from several of the shops situated under the arches of the newly established Hotel Byblos in Saint Tropez, including 'Mic Mac' which was owned by international playboy, industrialist and photographer Gunter Sachs along with his wife Brigitte Bardot among others. Further information about the boutique label, the now legendary hotel (home of Les Caves du Roy nightclub) and much more, can be found via the links at the end of the post. 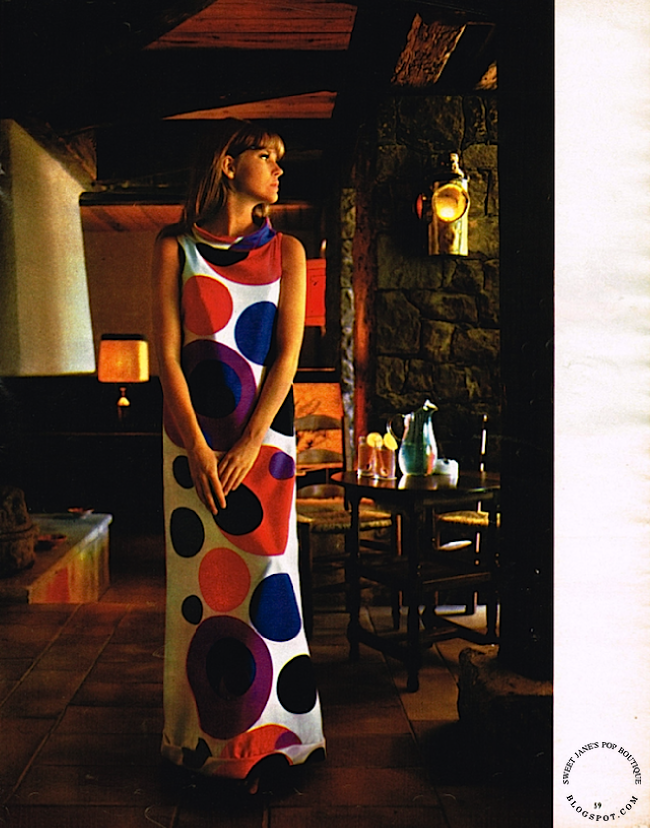 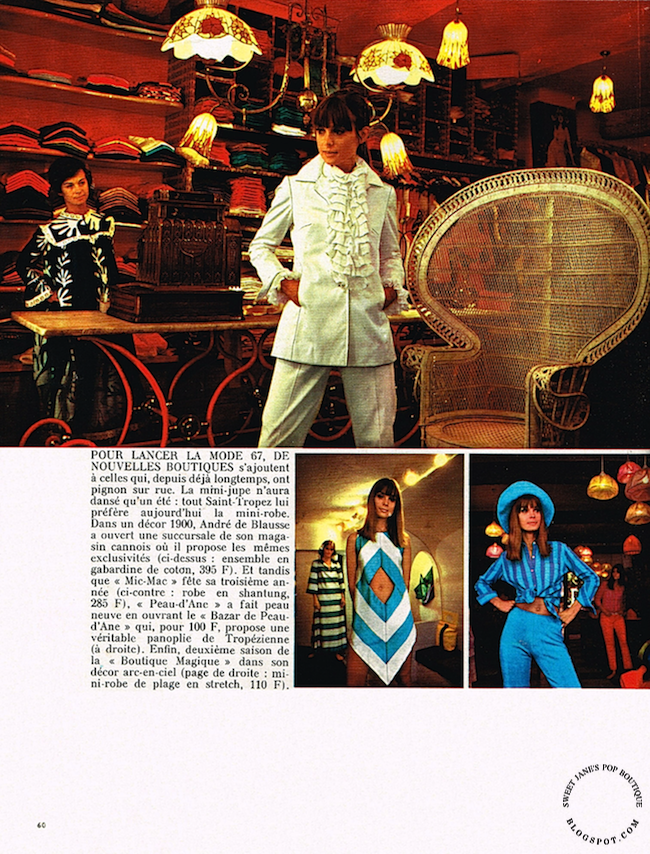 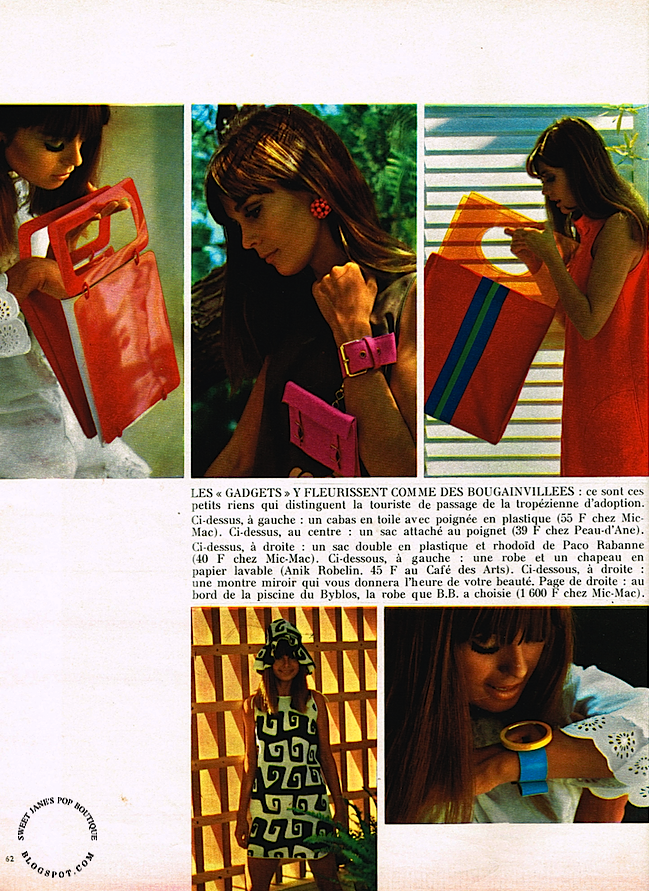 Left: dual plastic bag by Paco Rabanne, 40 F, from Mic Mac; Centre: Small pink bag which is attached to a wristband, 39 F, from Peau d'Ane; Right: a canvas bag with a plastic handle, 55 F, from Mic Mac; Bottom Left: a washable paper dress with matching hat by Anik Robelin, 45 F, from Café des Arts, Bottom Right: a mirror designed like a watch to give you the time of your beauty. 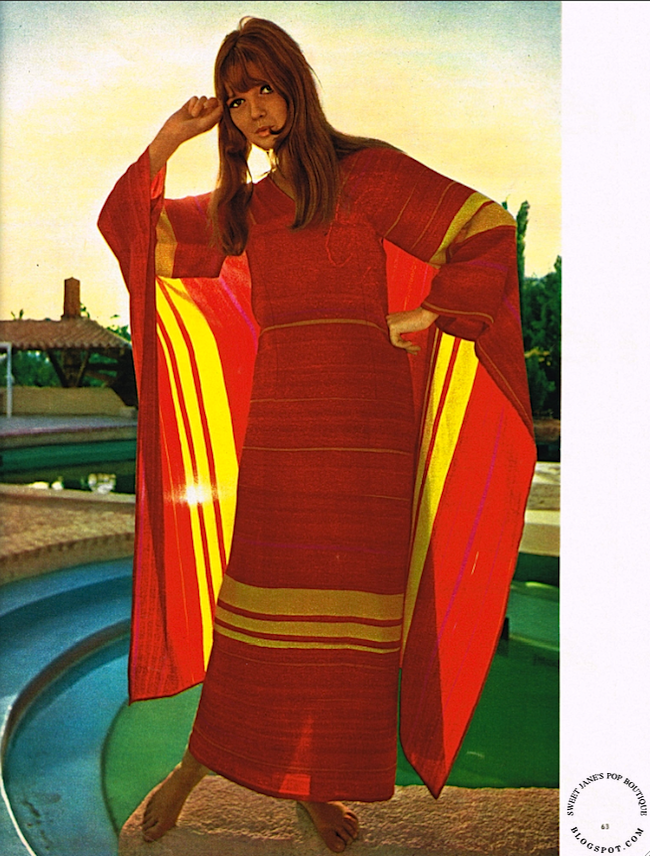 IMAGE CREDITS & LINKS
All images scanned for the Sweet Jane blog from Jours de France 29 July 1967 with thanks to Brad Jones, (photographer uncredited). Read: And God Created St Tropez here, Discover more about Mic Mac the St. Tropez boutique established in 1967 by Gunther Sachs and his brother Michael, Brigitte Bardot & Robert Faure here plus view images of the boutique's facade & much more here , read The Gunter Sachs appeal―the life and legacy of the playboy art collector here,  Watch Pink Floyd - perform live in Saint Tropez in 1970 (Full Concert)  here, Visit the legendary Byblos Hotel 'a palace worthy of the Arabian Nights' built by Jean-Prosper Gay-Para in 1967 here and discover more about its heritage here. And finally, watch the film directed by Roger Vadim in 1956 that started it all here .

Posted by SWEET JANE at 10:43 No comments: Links to this post 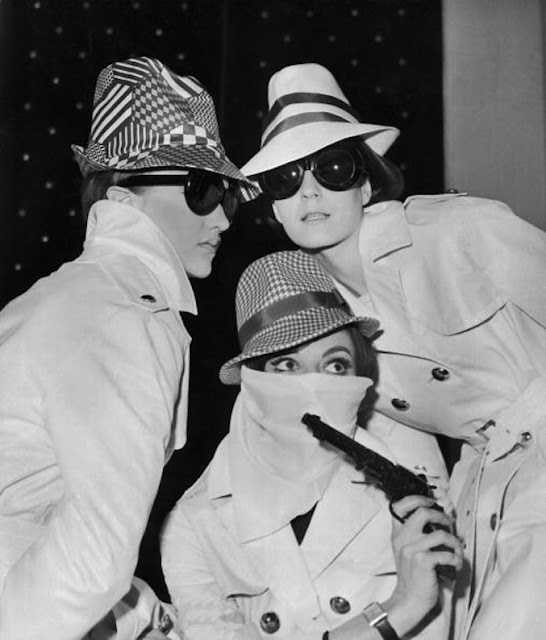 Posted by SWEET JANE at 10:40 No comments: Links to this post