I'm quite taken with this illustration by Alan Parry for Rave magazine—it was scanned from a minuscule paragraph measuring 2''x1¼'' on the editor's page announcing the 'Rave of the Month' poster which was included in the December 1967 issue as a pull-out Christmas present to readers. But, it caught my eye nonetheless, so i've enlarged it to take a closer look...I think what drew me in, were all the very obvious Glasgow Style/Art Nouveau and Beardsley influences which were so prevalent around this time. The finished poster is an incredible full colour psychedelic version of the same design—spread out over a double-page, which I will digitise in due course, although I think it works really well in basic black and white too. I also think that Alan Parry is fast becoming a favourite illustrator. He was a regular contributor to RAVE, as well as many other publications, but i've recently discovered that he also illustrated the 'Man About the House' comic-strip for Look-In magazine, which has endeared him to me even more so. Very evident Art Nouveau influences on display indeed! but not quite the Aubrey Beardsley or Glasgow Style as first suspected, but something more specific it would seem. By pure chance I recently happened to see an online invitation to an event taking place on New Year's Eve...the similarities between the illustration in the advertisement and this particular illustration were undeniable, so I investigated a little further and have found what I now believe to be the original source of inspiration in this 1907 New Year's Greeting card  below by Ethel Larcombe via a fantastic blog named The Pictorial Arts. Personally speaking, I don't think the obvious 'likeness' detracts from the Alan Parry poster design. Ethel Larcombe is a wonderful artist and one that I wasn't previously aware of, as she modestly only initialed her work, so I had some difficulty tracking her down. Therefore I would also like to say a special Thank You to Jo from Joyatri's Adventures in Vintage for filling in the blanks. You'll find further links to Ethel Larcombe and her work at the end of the page. (updated January 11th, 2016). 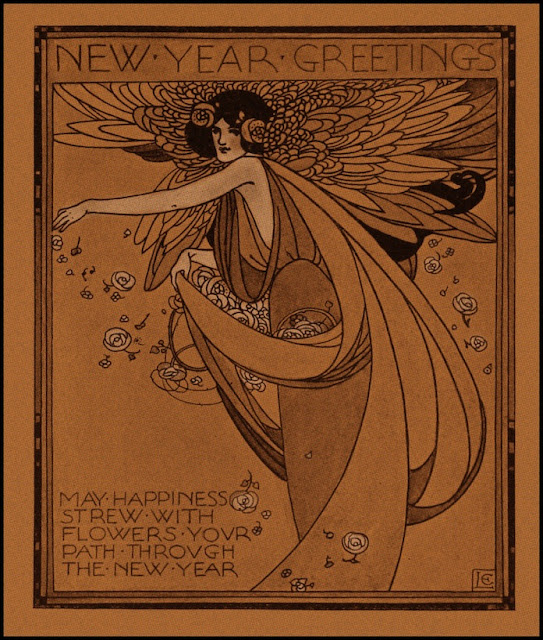 IMAGE CREDIT & LINKS
Image scanned by Sweet Jane from RAVE magazine, December, 1967. Illustration by Alan Parry. Examples of Alan Parry's illustrations for the Man About the House comic-strip & more here. View one of my previous posts featuring the artwork of Alan Parry for Rave. And it would seem that i'm not the only fan of his work. The Aubrey Beardsley influence here. A Lecture by Alison Brown, curator for European Decorative Art at Glasgow Museums on Beardsley’s influence on the Glasgow Style here. And finally, watch Man About the House, Season 1 Episode 1, first screened on ITV 15th of August 1973 here. Ethel Larcombe New Year Greeting card (1907) courtesy of The Pictorial Arts blogspot. A brief biography of Ethel Larcombe & examples of her artwork  plus some more examples on tumblr.