Another great cover from Gebrauchsgraphik International Advertising Art! This particular issue from June 1970 featured The Best Swiss Poster Designs of 1969, along with Industrial Art by Rolf Harder and Ernst Roch via Design Collaborative Montreal Limited, New Product Make-Ups on the American Market, the Genesis and Function of Visual communication, and also a report on Industrial Art from Vienna. I've searched every single page of the magazine, but much to my dismay, the cover illustration seems to be uncredited...so, the identity of the artist remains a mystery until I do some further sleuthing, which leaves me currently emulating the demeanour of the subject matter in question! I'm assuming that this particular illustration belongs to either the Industrial Art from Vienna or perhaps the Best Swiss Poster category.  The fact that it made the cover may suggest that it was the winning entry in the latter―although this is not necessarily always the case with Gebrauchsgraphik covers of this kind. I've also included two more of the Swiss poster designs from the same issue, which I previously featured on the blog a couple of years ago, these ones are the best of the 30 finalists in my opinion. 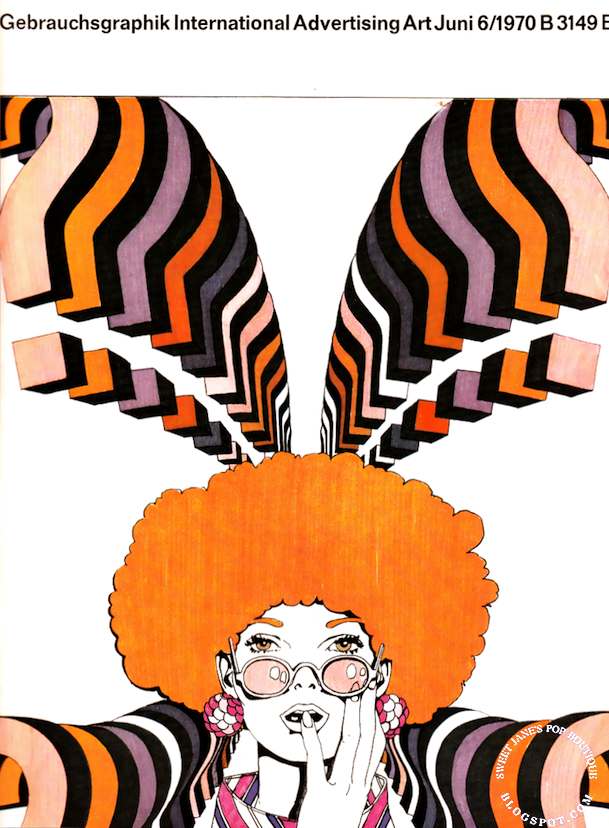 IMAGE CREDIT
All images scanned by Sweet Jane from Gebrauchsgraphik International Advertising Art, June 6, 1970. Cover Artist uncredited. *If you are planning on purchasing this issue for yourself at some point, it may be worth noting that both the Lee Jeans & Bell Epoque posters are in reality about a quarter of the size shown , I've enlarged them purely for display purposes.
Posted by SWEET JANE at 08:13 No comments: Links to this post


Gear For Having Fun 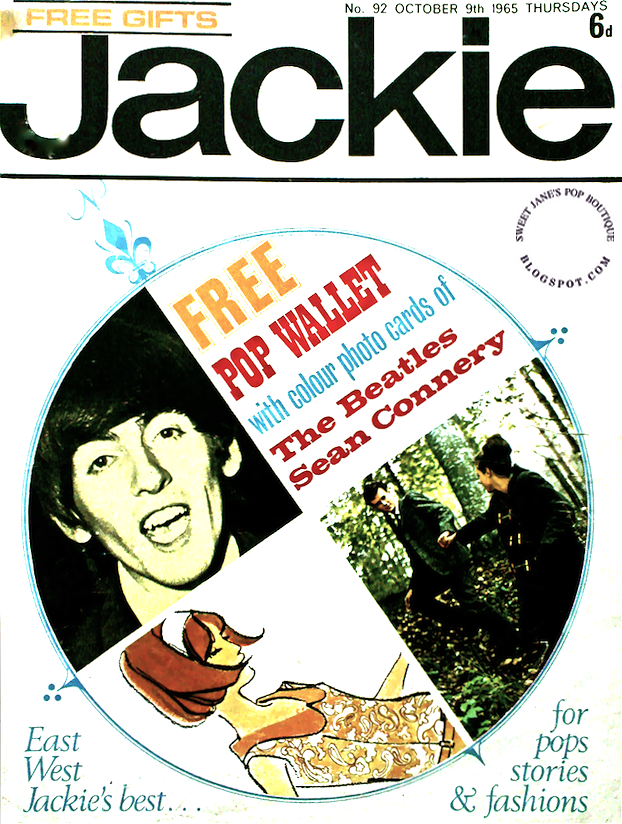 Here are some clothes that will go straight on to a party or dance from work. You'll look good all day, then turn heads in the evening. 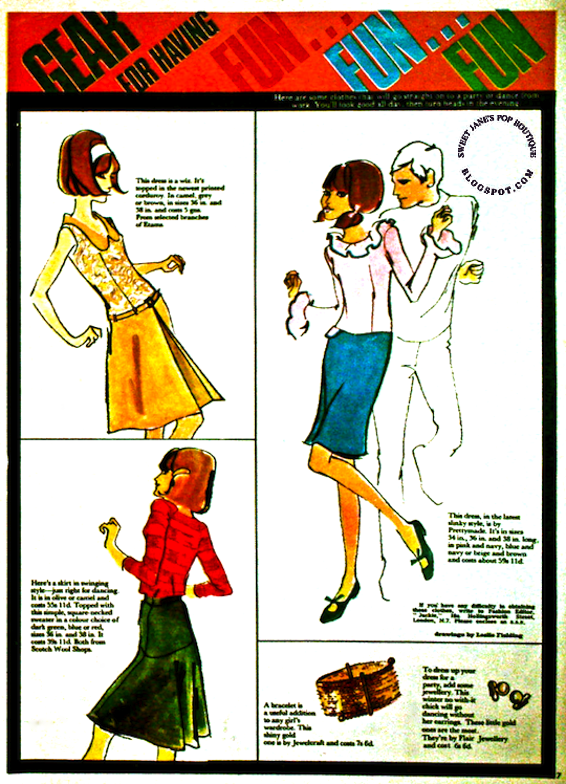 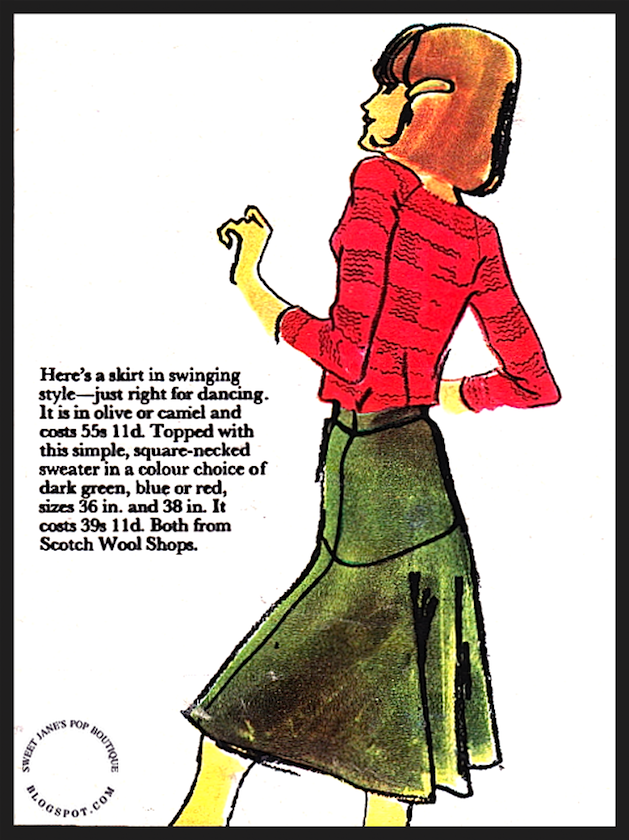 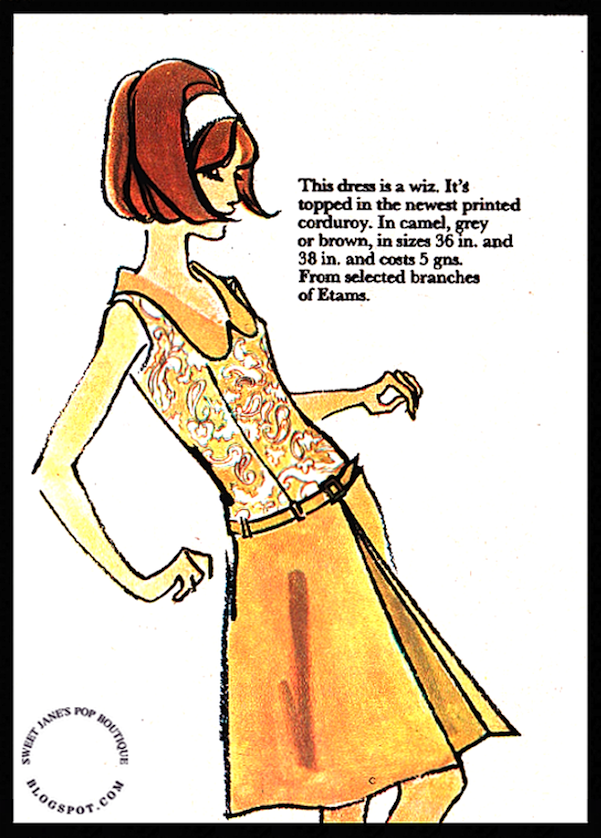 Posted by SWEET JANE at 13:24 No comments: Links to this post 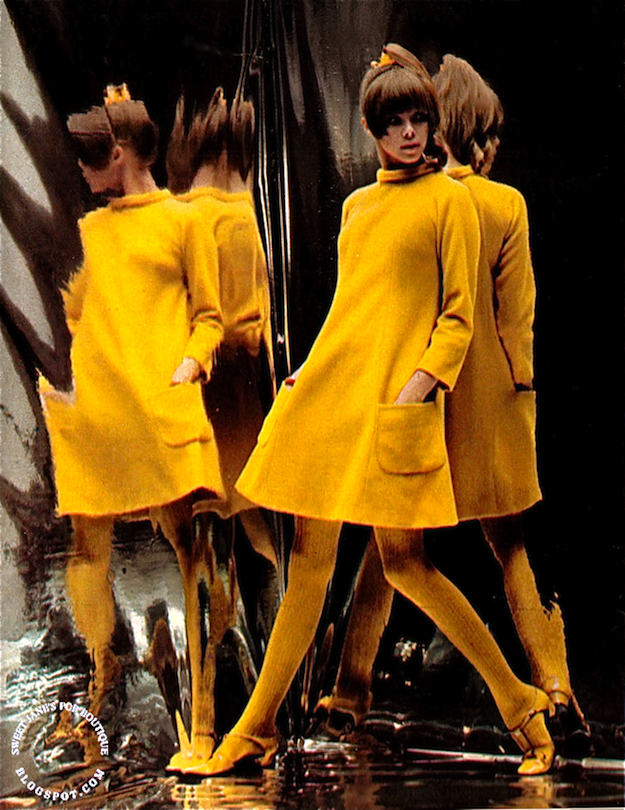 Put it in your pocket: a cowled coatdress in gold-bar yellow. About $40, Alder stockings, shoes by Et Cetera. Dress made of wool loomed in America, by Real Jrs. 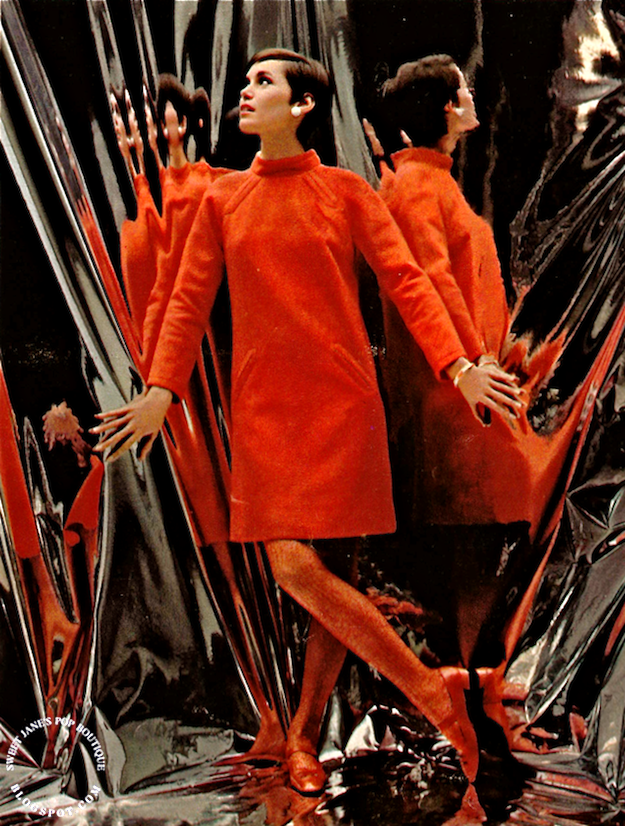 Slot seaming and flashes of white make a fortune in fashion here. (Even the collar stands up and pays rapt attention, as in all these coatdresses.) About $35. Earrings by Laguna. 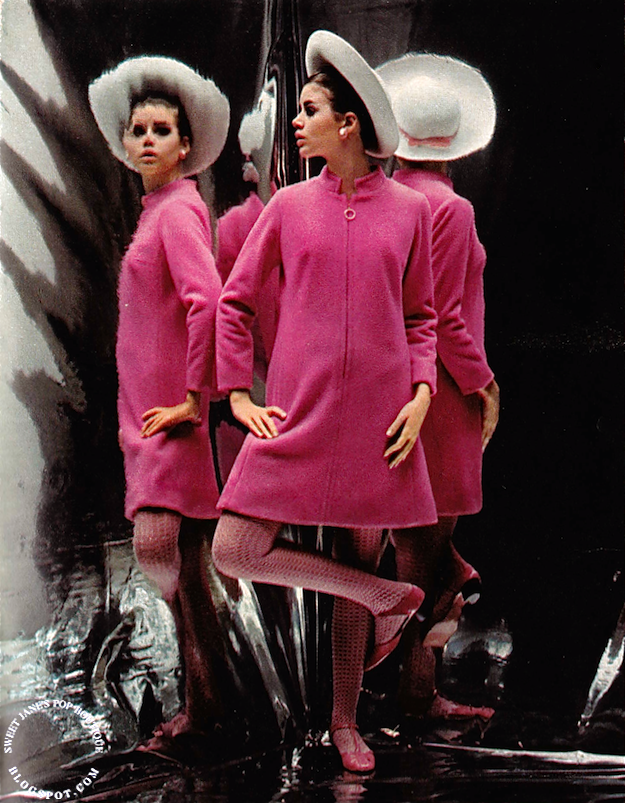 The magnificent mandarin: a coatdress of all wool fabric in high-profit pink. By Josette Jr. Petite; about $23, Adolfo II Breton, T-strapped shoes by Patinos. 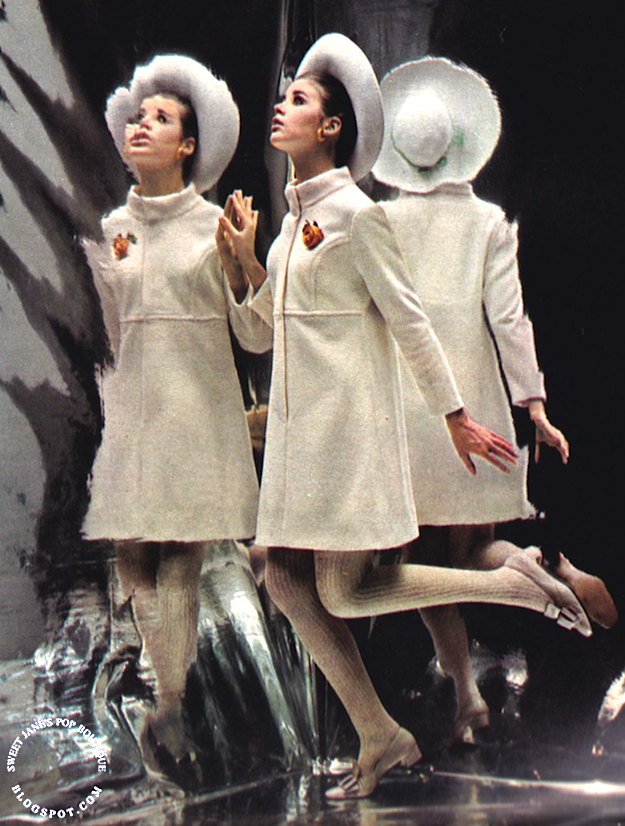 IMAGE CREDITS
All images & original text scanned by Sweet Jane from SEVENTEEN Magazine, September 1967. All photographs by Carmen Schiavone.
Posted by SWEET JANE at 07:31 1 comment: Links to this post 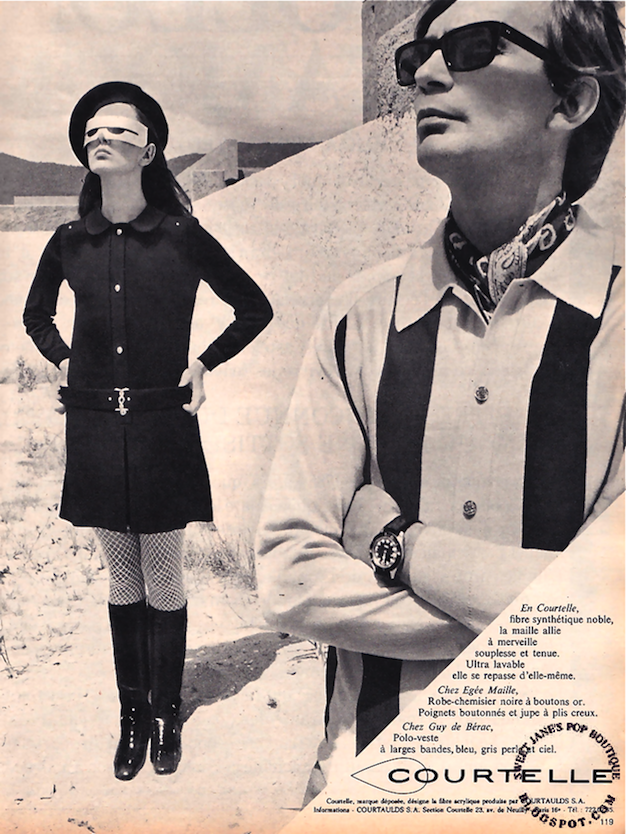 Posted by SWEET JANE at 05:05 No comments: Links to this post

A few of my favourites from a six page article about Italian fashion illustration, which were originally published in Gebrauchsgraphik International Advertising Art in February 1971. These type of illustrations would have been distributed by The Centro di Firenze per la Moda Italiana to representatives of the international press attending fashion shows staged in Florence at the beginning of every season. They were printed in hand-bill format with comments in three languages on the back, comprising of various keywords, plus the names of the fabrics and shades characterising the new collections, as well as the names of participating manufacturers of fashionable accessories and cosmetics. I have to say, as charming as the final black and white illustration is, in its own way...I couldn't help noticing that it also looks remarkably similar to the illustration by Urs Landis for French Vogue in 1970, an example of which you can view beneath it.

IMAGE CREDITS
All images scanned by Sweet Jane from Gebrauchsgraphik, February 1971. Except for final illustration by Urs Landis which was scanned from Fashion Drawing in Vogue by William Packer, but originally published as part of a beauty editorial in French Vogue, 1970.

Posted by SWEET JANE at 10:05 No comments: Links to this post 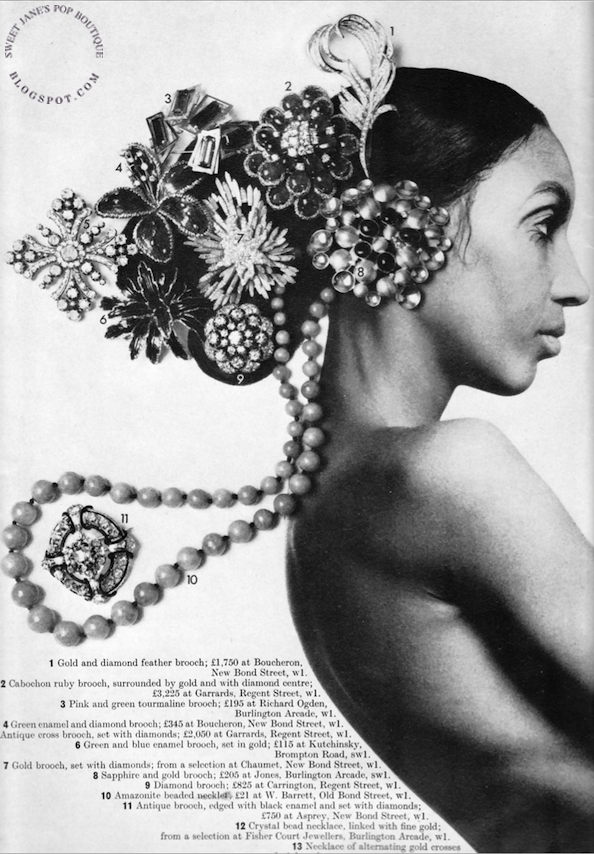 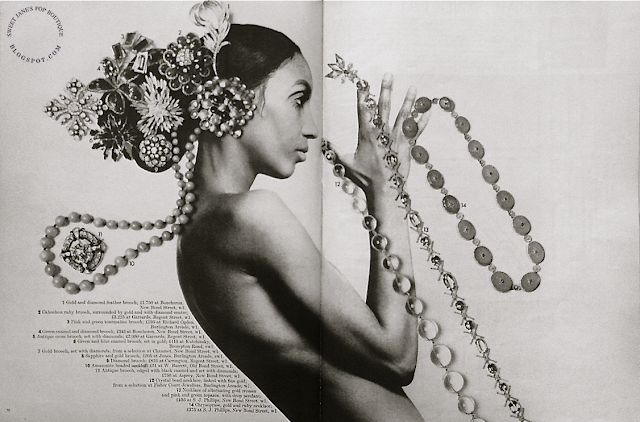 Posted by SWEET JANE at 06:16 No comments: Links to this post

In the city, at the beach, on all sorts of indoor and outdoor larks, the young are wearing caps this summer. Not just any old cap, but the cap, the squashy one with a visor brim that the Beatles favor. The kids buy the caps every where and at all prices, but mostly at Army and Navy stores which have become favorite emporiums in the U.S.  Milliners like the look too and have adapted the cap for their customers who go for it's nonchalance and the becoming way it has with long, smooth hairdos. The cap fad looks as though it will continue on in the fall and it may be that the long-standing fashion for hatlessness is losing its hold. As one young cap-wearer puts it, "Only the middle-aged ladies go bare-headed." 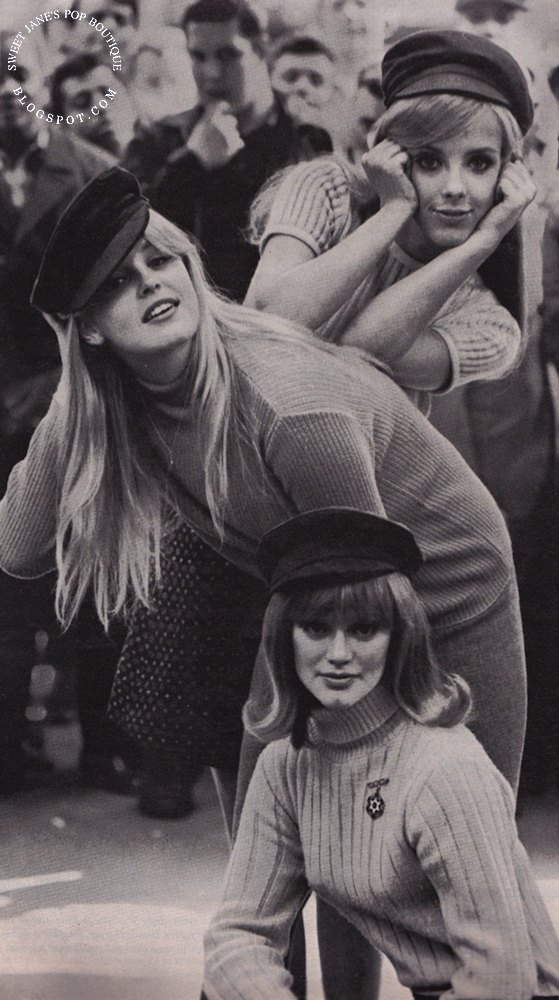 At Richard's Army and Navy store (left) in New York, three long-haired youngsters try on caps that sell for $2.99. 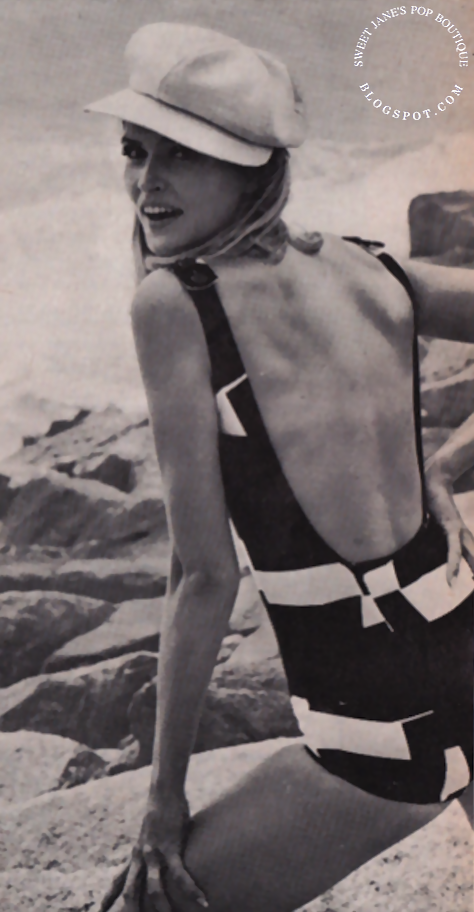 IMAGE CREDITS
All images & original text scanned by Sweet Jane from LIFE September 5th 1966. Photographs by Christa & Henry Grossman.
Posted by SWEET JANE at 04:15 No comments: Links to this post