I'm sure that many of you are already quite familiar with this photograph of Jane Asher, it has been reproduced several times in various fashion books over the years, but was originally published in an article called The Time, The Place, The Dress, and (if you still need it) The Food by Molly Parkin for Nova in 1966, printed poster-sized over a double-page layout, measuring 51.5 cm x 34cm for full visual impact! Molly commissioned Ossie Clark and Celia Birtwell to design a dress especially for the feature, she specifically wanted something which represented not only the fast-paced, disposable, transient nature of the current youthful attitude towards fashion trends but also something with enough decorative value to end up on the wall in a bedsitter as pop paraphernalia after it had been worn at the weekend, rather than thrown out with the trash!  So what better candidate for potential 'wall art' than a printed paper dress!  Celia painted her initial ideas in gouache, inspired by the work of Paul Poiret and illustrations from La Gazzete du Bon Ton, the finished designs were then printed onto a suitable Johnson & Johnson manufactured paper by the 'Art to Wear' company of Zika Ascher, and the dresses were made to order for the sum of 17s 6d each. I love the fact that Celia also took it upon herself to paint the vinyl floor tiles in the mock-up bedsit, mirroring the design detail from the border of the garment to complete the overall look of the set, and that Molly (a woman after my own heart) attributed just about every single item on display in the magazine feature to its source, from the Biba beads to the Woolworth lollipops and sticks of rock! 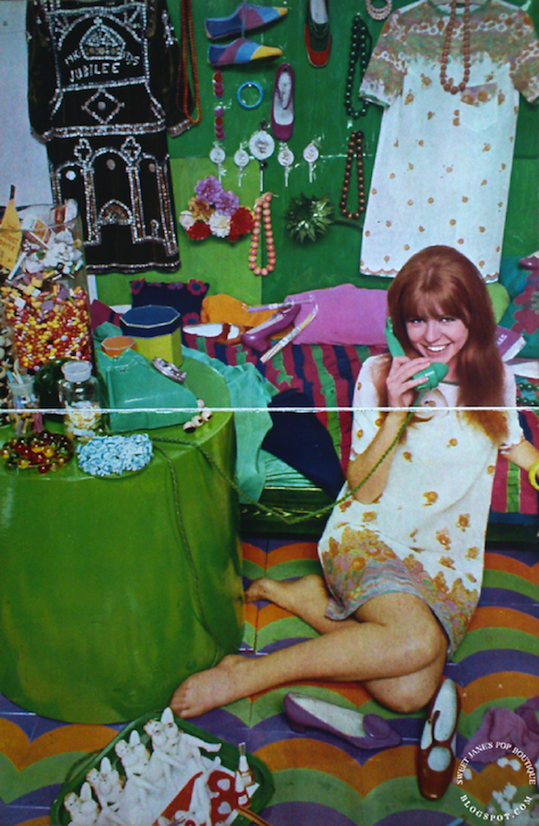 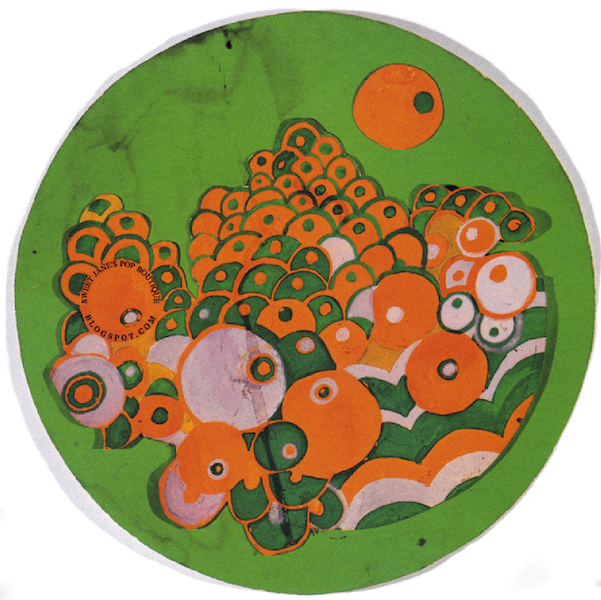 Above: One of Celia's initial designs for the paper dress rendered in gouache, inspired by the work produced at the Martine School of Decorative Arts in Paris. The school was set up by designer Paul Poiret in 1911 at 'La Maison Poiret' in an endeavour to realise his dream of creating a decorative arts movement in France which would be on par with the new developments in the arts taking place in Vienna and Germany at this time. The students mainly consisted of young working class girls between the ages of 12-15 years old, Poiret encouraged them to work freely from nature, organising trips to the countryside and conservatories whenever possible, but apart from this input they were otherwise without artistic supervision. His role was merely to stimulate their artistic taste without influencing or criticising them, in order to maintain the purity of the original source of inspiration in the work. He would then select a range from the finished designs which were suitable for reproduction and have them applied to fabrics, wallpapers, carpets, cushions and ceramics. The work received an excellent response amongst art circles, and following an exhibition at the Salon d'Automne in 1912 the demand was such that Poiret opened a retail outlet called 'Atelier Martine' on Rue du Faubourg St Honoré. With a very favourable review in Vogue, the Martines went from strength to strength, also using their designs to create magnificent large scale murals, transforming hotels, shops, offices, private houses and the studio of dancer Isadora Duncan into exotic oriental palaces in the process. An international reputation was quickly established, however, the gathering momentum of the Martines success was  stopped in its tracks by the outbreak of WW1 in 1914. The school closed for the duration of the war, with many of the students relocated to a safer environment. Business eventually resumed as normal in the aftermath  but although Poiret tried several times to re-establish his career and the Martine style, most notably in the mid 1920s with an extravagant display at the International Art Deco Fair in Paris, both failed to ever regain the immense popularity of their glory days. 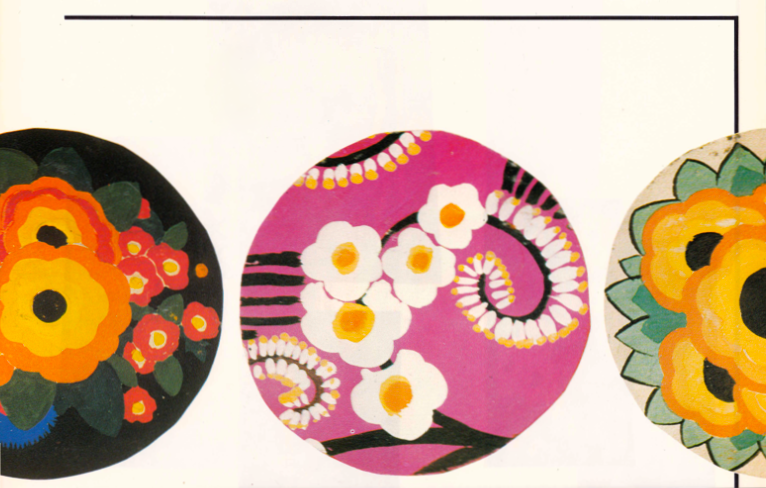 Three designs for round carpets, typical of the Martine style, from the workbooks of the School of Decorative Arts. 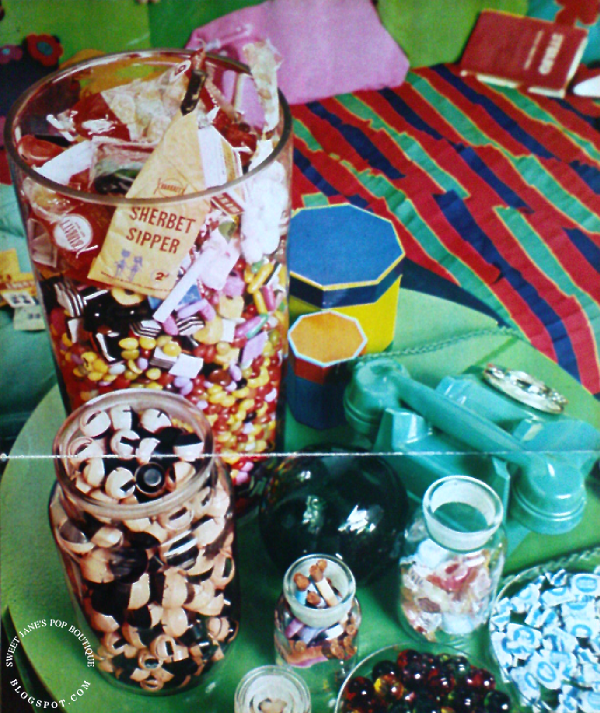 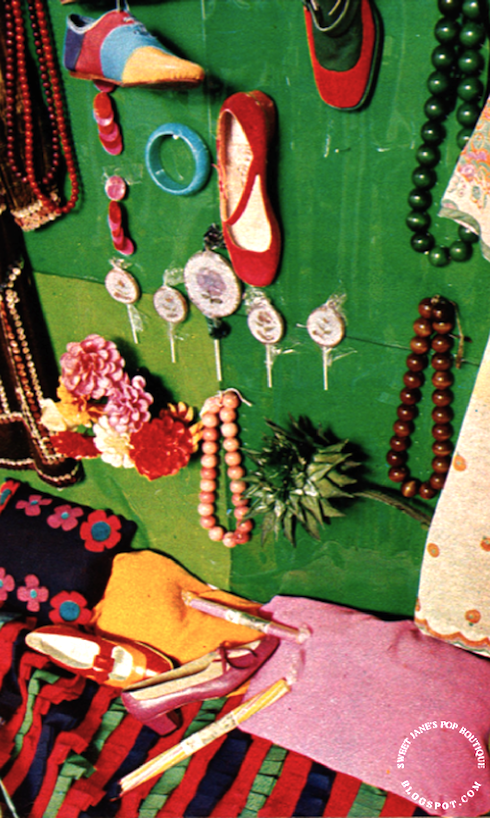 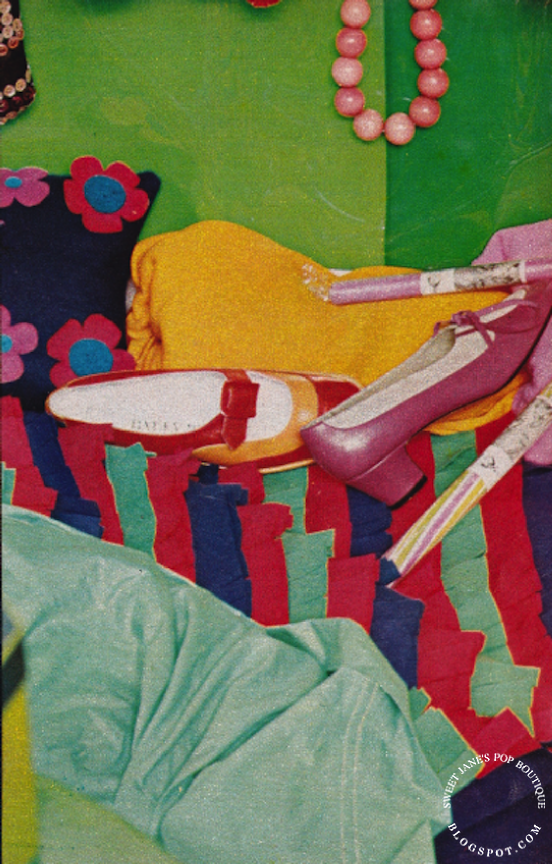 IMAGE CREDITS
All images scanned by Sweet Jane from an original article by Molly Parkin for NOVA, September 1966. Model; Jane Asher, Photographs by Duffy. Celia Birtwell design in gouache scanned from Celia Birtwell by Celia Birtwell  *Close-up of border design detail on printed dress courtesy of the V&A collection. Carpet designs from the Martine School of Decorative Arts scanned from A Fashion For Extravagance by Sara Bowman.