Doing it in Style! The Art Of The Affair Illustrated by Graham Percy┃Queen Magazine (1969)


The Art Of The Affair

A six page feature by Donald Wiedenman, originally published in Queen―reminiscing about the lost art of the so called 'Proper Affaire' which had become almost obsolete in the new permissive 1960s society. However, in its heyday, the customary etiquette appears to have included a weekend stay at the Ritz (booked in advance using a fictitious name of course) followed by the consumption of copious amounts of Champagne, Tia Maria and Vodka Martinis, whilst luxuriating in Badedas bubble-baths. The daytime hours were spent shopping for trinkets and clothes in Bond Street (a Hermès scarf and Gucci bag for the lady, a heavily-beaded patchwork waistcoat from Mr Fish for the Gentleman), and a quick trip to the Kensington Antique market resulting in the purchase of matching pink crushed velvet trouser suits which they would never wear―but couldn't resist nonetheless. Over the weekend, other pursuits involved browsing in the Gentleman's favourite salacious bookshop in Soho, tickets to see the musical Hair, next stop―some light gambling and later, fine dining and dancing at Annabel's in Berkeley Square. Of course, all of this activity is punctuated with the obligatory phone calls to their 'nearest and dearest' before the return back home on Monday, but in spite of these necessary 'interruptions', they still manage to fit in a last minute shopping spree to pick up some 'tokens of affection' for each other as a memento of the weekend before they go their separate way. It's quite an intimately detailed article, obviously based on the experiences of someone that the author knew 'well'...and it's an interesting lament for times past, but personally speaking, apart from the account of the visit to Mr Fish and the Kensington Antique Market, I was far more taken with the fantastic accompanying illustrations by Graham Percy.


DOING IT IN STYLE

Without a doubt, there is only one hotel to stay in for a really old-fashioned, slightly camp Proper Affaire, and that is the Ritz. Amidst, mirrors, gilt, and fading elegance, the Ritz offers the best service, the most discreet staff, the biggest bathtubs, and the most intriguing atmosphere―you can still actually meet behind the aspidistra. The Savoy, sad to report, is too old-fashioned (even for an old-fashioned affaire) and Claridges is full of too many politicians, bodyguards, and curious clerks. The Dorchester is the second choice, but the lobby is unfortunately always full of famous people and hovering photographers, and if the Lady or Gentleman is married, this is to be avoided at all costs. 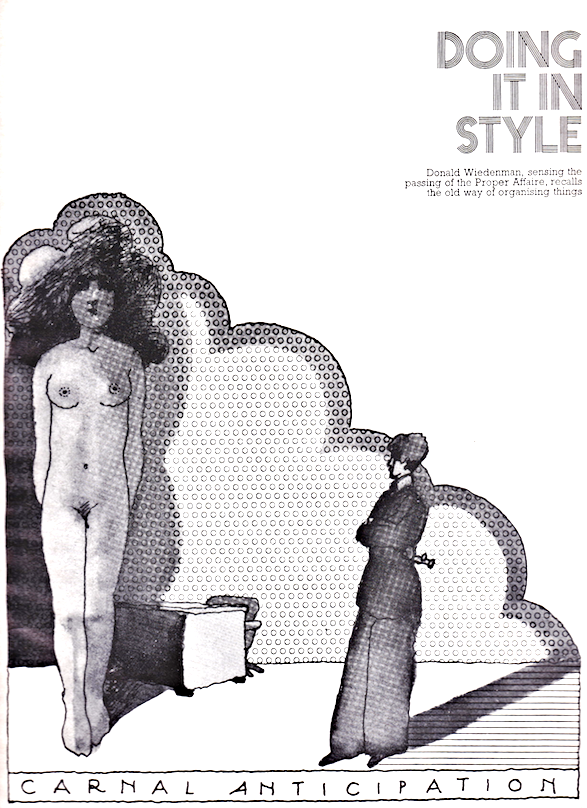 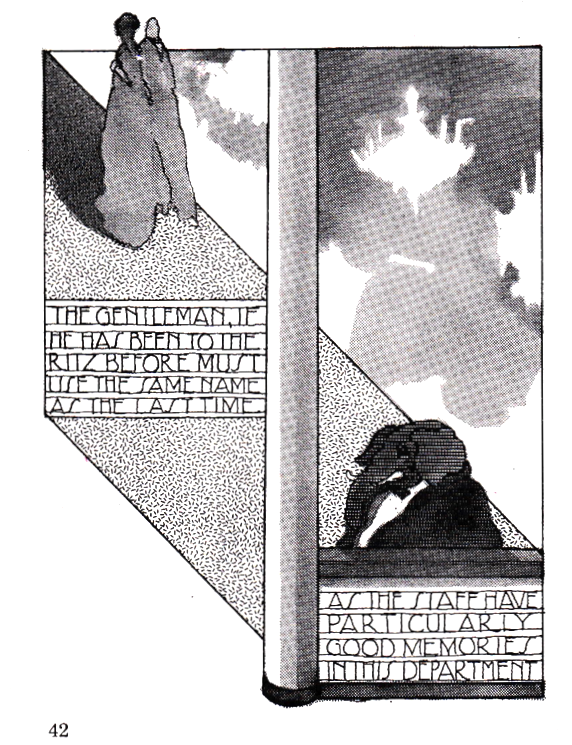 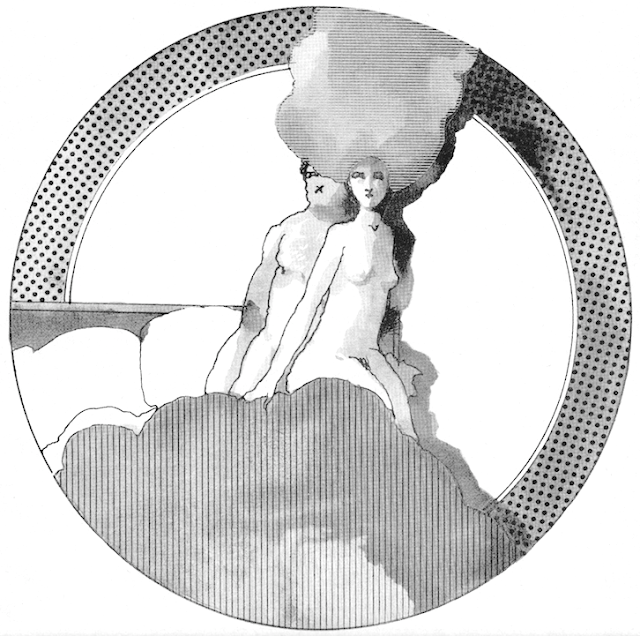 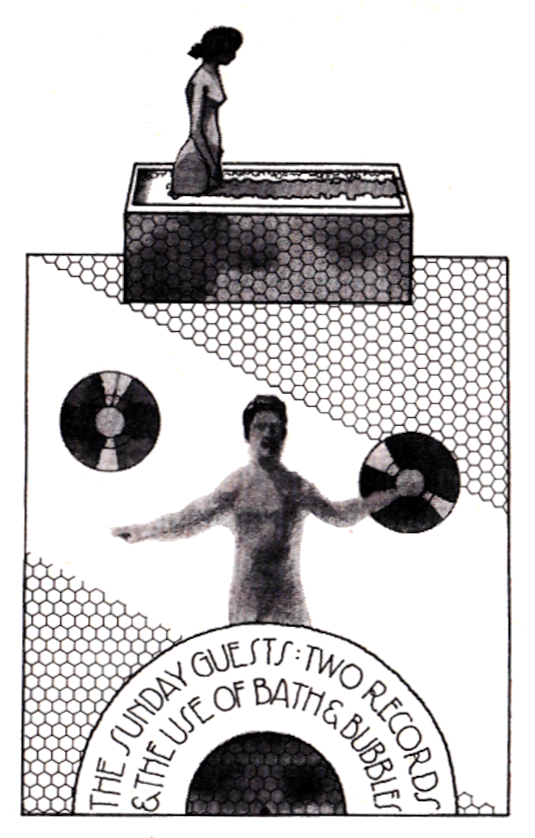 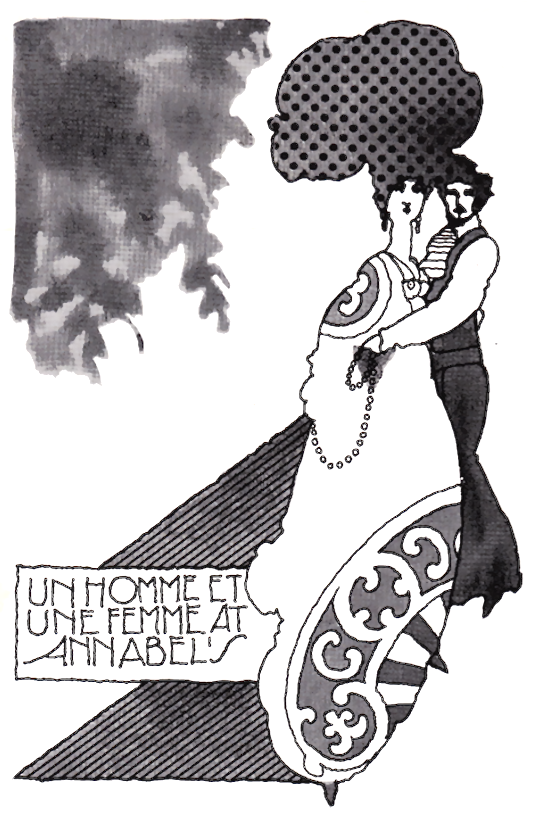 It is still early and the small dance-floor is not yet crowded. The Gentleman asks the 'disc dolly' (a pretty girl named Hildey) to play something from Un Homme Et Une Femme, which she does. They go back to their seat's when the latest Rolling Stones single is played, because a Gentleman and a Lady do not dance to that kind of music. 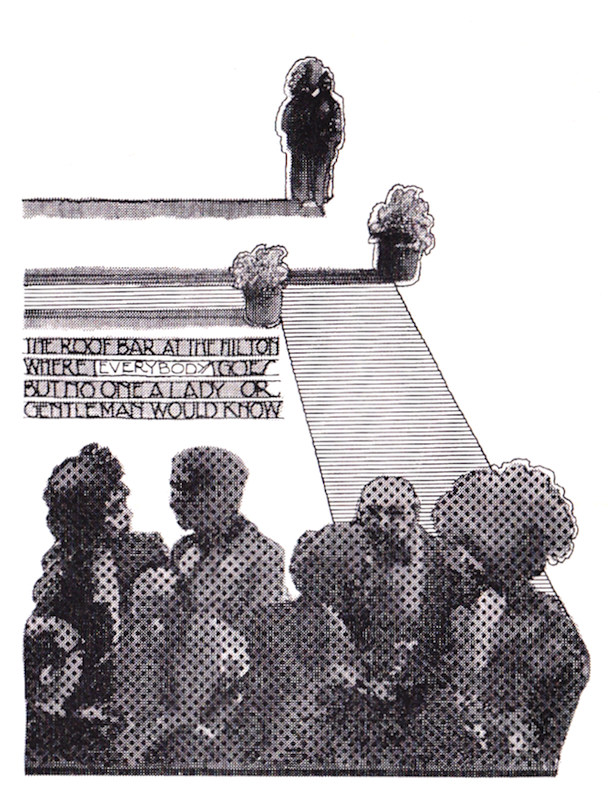 IMAGE CREDITS & LINKS
All images scanned by Sweet Jane from an original article by Donald Wiedenman for QUEEN Magazine, October, 1969. All illustrations by Graham Percy. The Imaginative Life and Times of Graham Percy - a major posthumous exhibition of his work which was shown at galleries throughout New Zealand in 2011 is still available to view online.  Discover more about the History & Heritage of Claridges, Estd. 1856. More on Mr Fish can be found in some of my other posts about Dandy Fashion: Michael Fish and Simon Dee 1968, plus New plumes in the peacock's tail 1968.  And finally Annabel's: A String of Naked Lightbulbs the trailer for a documentary about the private members niteclub, founded in 1963 by Mark Birley, which he named after his wife, and if you enjoyed that, you can watch a longer clip here.