Who's who in the underground? 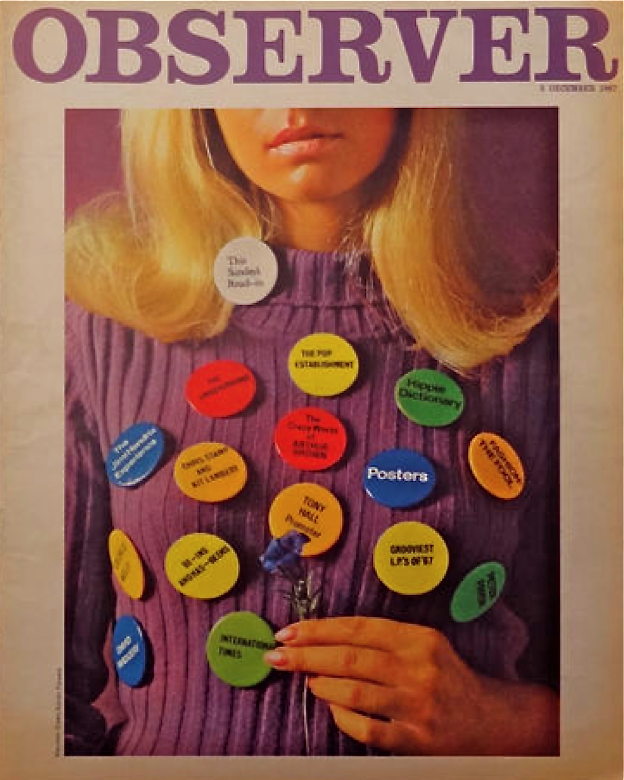 Who's winning the battle of the generations?


IF you are over 25 you feel uncomfortably aware that Pop is not just music; Something Is Going On Underground. If you are under 25 you are certain that It's All Happening. A curious alliance has been struck between teenagers, the hippies, commercial pop and the young intellectuals. Somehow all have crystalised into a separate society or 'scene'. At it's centre, the authentic full-time hippies, young, serious, flamboyant in dress, claim to have taken an analytical look at the adult world, experienced a violent revulsion at what they saw, and decided that the only honourable course is to detach themselves, or 'drop out'. International in outlook, they feel they have more in common with their age group in San Francisco or Amsterdam than with older generations, sometimes referred to as the 'grey'. Their ideas are as colourful a grab bag as their clothes. Genuine young curiosity often founders in hippy ideas of 'love' that have only a marshmallow consistency, or in faddy mysticism. But Vietnam and civil rights arouse a common response.

The Underground plans to live peacefully but disparately. It produces and reads it's own newspaper, the International Times, runs it's own boutiques and bookshops, organises it's own finances and legal aid for members who get picked up by the police, goes about it's own pop arts business. It also likes to go about it's own pleasures. This is the point at which it clashes with the 'straight' world since, to break from the confines of conventional living, the Underground explores hallucinations produced not only by light shows, noise, and colour, but also by marijuana and LSD. So its private parties and tribal gatherings, its Freak Outs, are bound to arouse police attention.

Underground designers influence the visual style of shopping bags, posters, magazines and paperback jackets. Pop fashions provide ideas that help keep the rag trade lively. Pop has no demarcation lines: the Underground has produced a new kind of entrepreneur, who may run a pop group, write songs, design badges, and have an interest in a boutique at the same time. And clambering on the Underground bandwagon are commercial impresarios, organisers and disc jockeys who are hippy for this season but might next year be offering to promote the Hallé Orchestra if that proves more marketable.

To some, the pop scene with it's mixture of Beatles and Beardsley seems to be a show of decadence, and evokes sighs that the precocious twentieth century is reaching it's fin de siècle only too soon. To others, it is a sign of democratic vigour, and of the way the young are naturally outwitting the meritocracy: winning the generation battle. On the 'scene' the same names crop up again and again, and in such different fields, that the outsider begins to suspect an Establishment. Like any establishment, it's founded on past togetherness ('I knew Joe back in CND') and present self-interest: it is an Underground maxim that their talent and money should be kept within the group. MAUREEN GREEN describes 16 people who are helping to make the 'scene' work. 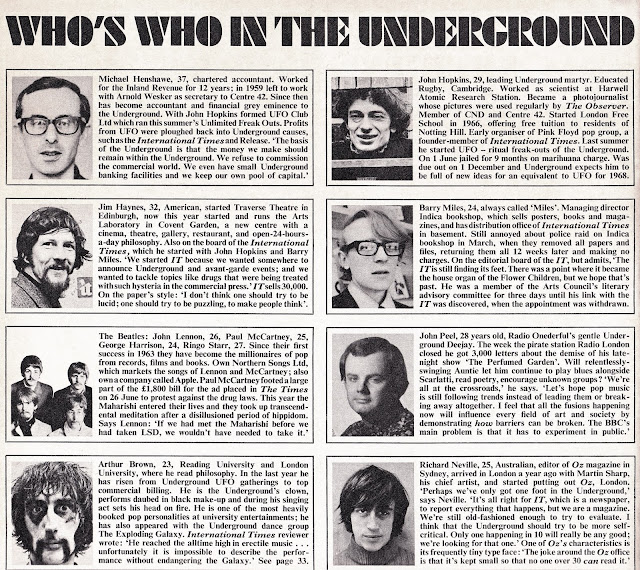 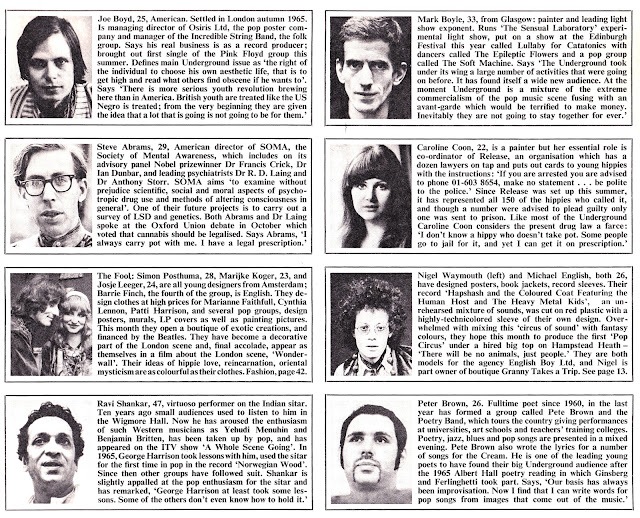 IMAGE CREDITS & LINKS
All images scanned by Sweet Jane from an original article in Observer Magazine, 3rd December, 1967. Cover photography Maureen Green/Adrian Flowers. Caroline Coon's website can be found here. John 'Hoppy' Hopkins website can be found here. You can read more about The Fool Design Collective here The Psychedelic Poster Art of Hapshash and The Coloured Coat here. The complete archives of the International Times are available to read here.