This is the first half of an eight page RAVE magazine feature originally published in 1965, which documents the rise of the new boutique phenomenon in Britain. It covers a total of eight London based boutiques in full, but also recommends another seven, which gives just some indication of their increasing popularity at this point in time. Within a year, Millicent Bultitude had published a pocket book called Get Dressed, a useful guide to London's Boutiques, in which she features 38 more and name checks another 29, while also leaving some pages blank at the end of the book for the reader to fill in the facts about any new ones that they may discover for themselves, due to the rapid pace at which they were popping up all over the Capital. 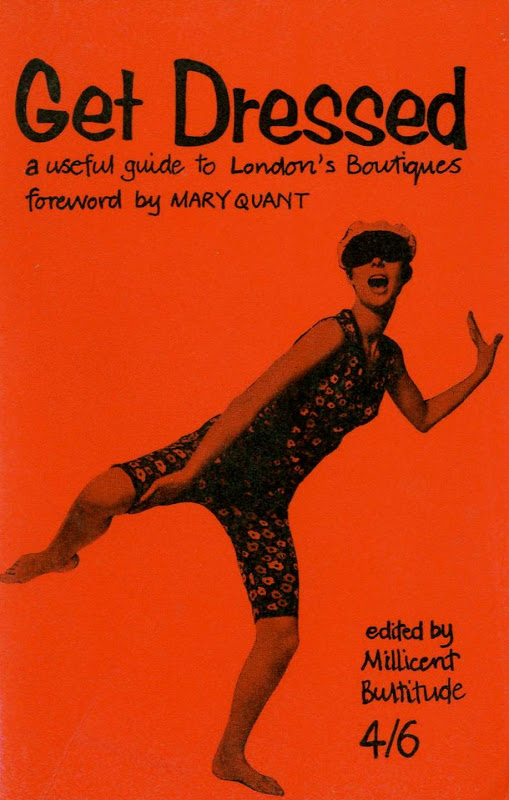 The cover of Get Dressed, edited by Millicent Bultitude, 1966.
I'll post the rest of the RAVE article at a later stage, meanwhile the four covered in this particular post are Victoria and Albert, Hem and Fringe, Biba, and last but not least Pennyhapenny Boutique, which I was intrigued to discover was owned by one of my favourite bands The Pretty Things. There isn't a great deal of information given about the group's connection with the shop in this piece, but I was interested enough to go searching for more, however, I couldn't find anything until a couple of days ago, when I just happened to check out the Ugly Things Magazine Facebook page, and discovered that they had recently uploaded an interview with Dick Taylor about the boutique (the interview was from an issue of Jackie magazine dated the 12th March 1966).
Apparently, it was equally owned by Dick and Phil May, they seem to have decided on the name Pennyhapenny as part of a gimmick at first, which they quickly realised wasn't going to prove profitable if they followed through on their original ideas of having nothing for sale in the shop which cost over a penny-halfpenny or by always including a penny and one half penny as part of the change with every item purchased. You can read the rest of the interview by clicking on the link above or via the further reading/links section at the end of this page. I'd love to know much more about it, how long it remained open and what became of it all, because at this stage they had plans to expand the business in the not too distant future and were also considering opening a male equivalent. So anyone out there with any relevant information, feel free to get in touch!

Boutiques are the current in places to buy clothes and accessories. The People who run them, with flair and fashion sense, know exactly what YOU like to wear and how it should be worn. Boutiques are small, interesting, friendly places where you can browse for hours without anyone bothering you. Most London boutiques like Biba, The Hem and Fringe, The Shop have new designs every week. And the Boutique boom is extending fast all over the country. Boutiques are often hidden away in the side streets and their fame spreads by word of mouth. There is usually an air of mystery about them with beat music playing in the background. Most of them have exclusive clothes and a lot of them make things specially to measure. Boutiques are fun places to buy your clothes and they're often used as rendezvous for friends. 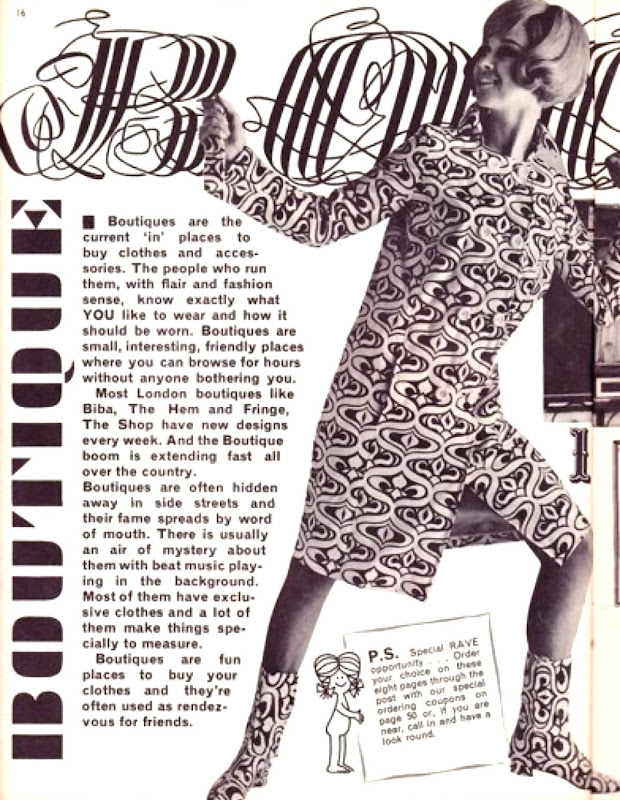 VICTORIA and ALBERT BOUTIQUE
28 Victoria Grove, London W.8
Owned by Rosemary Kirsten who is an ex-model. Sells boys and girls gear of varied price range. Amongst her customers are Twinkle and Lulu. Our choice is a raincoat in P.V.C designed for the boutique by Hilary Floyd, 11gns. 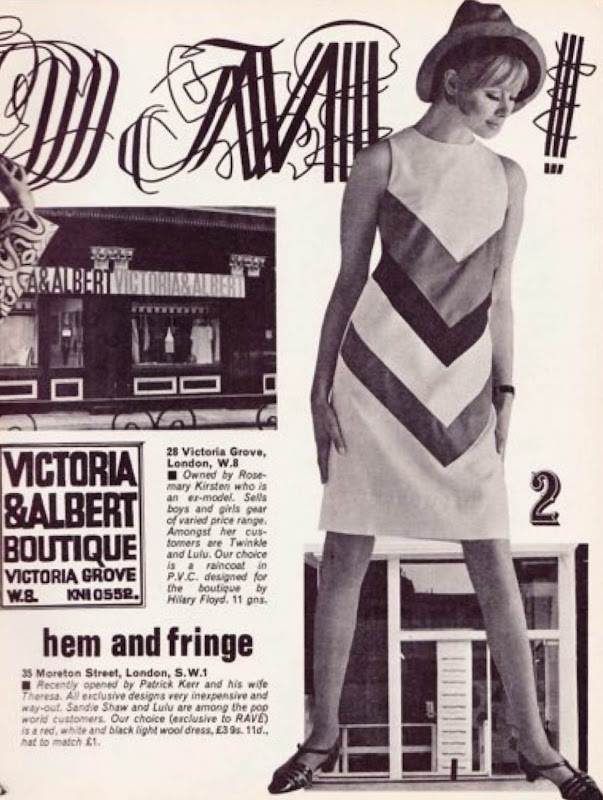 HEM and FRINGE
35 Moreton Street, London, S.W.1
Recently opened by Patrick Kerr and his wife Theresa. All exclusive designs very inexpensive and way-out. Sandie Shaw and Lulu are among the pop world customers. Our choice (exclusive to RAVE) is a red, white and black light wool dress, 33 9s. 11d, hat to match £1. 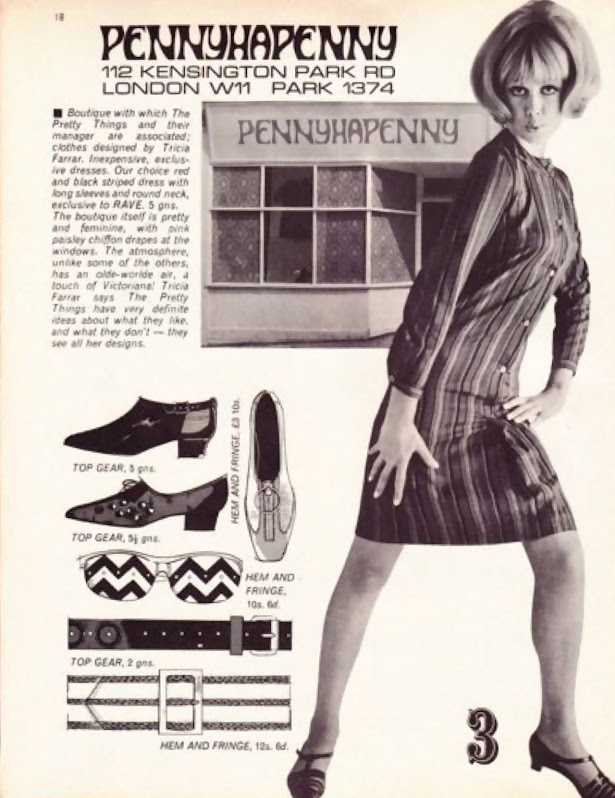 PENNYHAPENNY
112 Kensington Park Road London W.1
Boutique with which The Pretty Things and their manager are associated; clothes designed by Tricia Farrar. Inexpensive, exclusive dresses. Our choice―red and black striped dress with long sleeves and round neck, exclusive to RAVE, 5gns. The boutique itself is pretty and feminine, with pink paisley chiffon drapes at the windows. The atmosphere, unlike some of the others, has an olde-worlde air, a touch of Victoriana! Tricia Farrar says The Pretty Things have very definite ideas ideas about what they like and what they don't―they see all her designs. 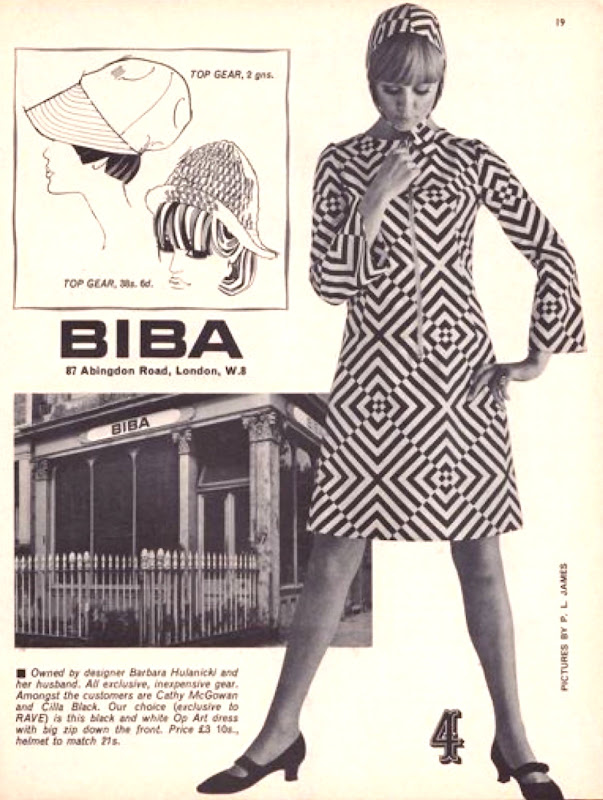 BIBA
87 Abingdon Road, London, W.8
Owned by designer Barbara Hulanicki and her husband. All exclusive, inexpensive gear. Amongst the customers are Cathy McGowan and Cilla Black. Our choice (exclusive to RAVE) is this black and white Op Art dress with big zip down the front. Price £3 10., helmet to match 21s.

All images scanned by Sweet Jane from an original feature in RAVE Magazine, September 1965. Fashion Notes by Trilby Lane, all photographs by P.L James, and Fashion Sketches by Alan Parry. Get Dressed―a useful guide to London's Boutiques by Millicent Bultitude, published by The Garnstone Press in 1966.
Boutique: A 60s Cultural Phenomenon by Marnie Fogg, published by Mitchell-Beazely. The Look―Adventures in Rock and Pop Fashion by Paul Gorman, published by Adelita.  Boutique London ―A History: King's Road to Carnaby Street by Richard Lester (ACC Editions).
Visit The Pretty Things Official Website, and view some fantastic footage of The Pretty Things in action via one of my previous posts about the Mr Freedom boutique. Ugly Things Magazine: Wild Sounds from Past Dimensions―Passionate, informed, insightful, in-depth coverage of the overlooked music of the 1950s, 60s, 70s & beyond. Check out The Look of London: An illustrated guide to the city's most influential fashion spots 1950-2000―From modest Holts in Camden Town to psychedelic Hung On You in Chelsea there are more than 100 entries, spread across time and geography, published by Herb Lester Associates. (Which is an excellent and far less expensive alternative to Millicent Bultitude's guide). And finally, discover more about Patrick Kerr of Hem & Fringe Boutique, the  Dancer and choreographer who got the nation's teenagers moving on 'Ready Steady Go!'