Above, the intro to a charming article written by Ready Steady Go presenter, otherwise known as the Queen of the Mods 'Cathy McGowan' for RAVE magazine in November 1964, in which she enthuses about the fledgling designs of Barbara Hulanicki at a very early stage in her Biba career. Published less than two months after the opening of the first Biba shop in Abingdon Road,  it's part of a fourteen page feature (six of which are made up of poster-style photographs) called 'Cathy's Clan―Are you with them?...They're the new Jet Set, today's Fun People...and the Ready Steady Girl knows them all.'  And she certainly did!

Having made the transition from secretarial work in the fashion department at Woman's Own magazine to co-presenting Britain's premier weekly music TV show while still in her teens after she had been chosen from among 600 other applicants for the position, she suddenly found herself propelled to fame―and had quickly become a key component in the emerging British pop and fashion scene.  The show beamed into every household between 6pm and 7pm on Friday nights under the declaration The weekend starts here!, and as its youthful co-host, she personified the new-profile teen of the decade―a genuine music fan, with an impeccable flair for fashion and a informal presenting style which was a like breath of fresh air when compared to everything had gone before.


This was Cathy's second feature for RAVE, having only recently joined them as a contributor in the previous October issue. The pages are full of the latest insider pop gossip, musings about what's 'in' versus what's 'out', her style heroes, and the clubs that she and the new jet set frequent, such as The Scene, Beat City and the 51 Club, but the definite favourite at this point in time seems to be the Ad Lib in Soho. She also chats about her most recent designer discoveries―as presenter of RSG it was a firm rule that she wore a different outfit on the show every week (she was given a clothing allowance to cover this), and usually went shopping for a new look on Saturday mornings with her sister Frankie. Apparently, a regular port of call was always Woollands in Knightsbridge, where she had purchased her first ever RSG outfit, but reading between the lines, I'm guessing that overenthusiastic sales girls, a dozen or more approaching her at once each time since with 'just the right little number that they had been keeping especially for her' may have taken the spontaneity out of the shopping experience there, and sent her searching in the direction of Foale & Tuffin and Barbara Hulanicki instead.

She was introduced to Marion Foale and Sally Tuffin through a friend in December 1963 and soon became a regular client at their Soho showroom, viewing all their new work several weeks before it went into production. And the Biba designer was first brought to her attention through her sister Frankie, via a double page spread in Honey Magazine which had featured several of Barbara Hulanicki's designs, they included a mix and match printed cotton blazer, skirt and trousers, along with a Winnie-the-Pooh hat and blouse―this was the summer of 1964, approximately four months before Biba had made the changeover from fully fledged mail order business to bricks and mortar shop. 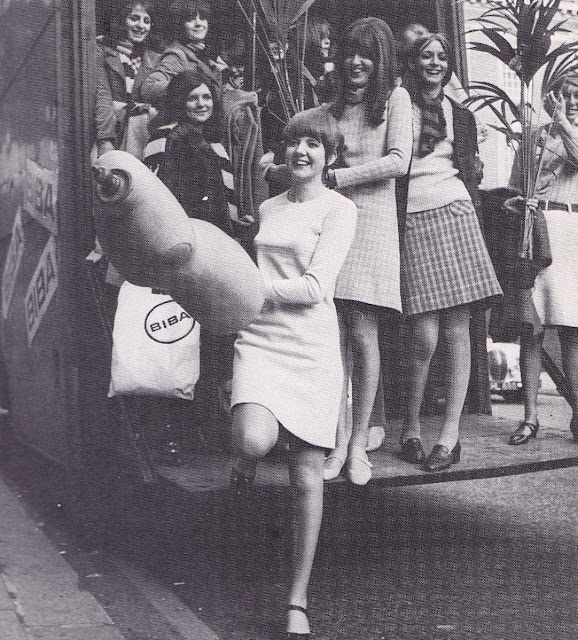 Cilla Black & Cathy McGowan helping with the move from Biba in Abingdon Road to the new Biba premises in Church Street (1966).


Ready Steady Go ceased broadcasting in December 1966 after a three-year-run, and although Cathy McGowan's career in television was relatively short lived―there is no doubt that she was pivotal in translating current fashion trends to the masses. According to Revolt into Style―George Melly's account of the Pop Arts in the 50s and 60s based on his own experience as a touring musician, he notes that prior to the arrival of RSG, fashions and other trends could take an incredibly long time to spread throughout the country, with even the larger cities such as Manchester and Liverpool flagging at least six months behind the capital. However, the weekly transmission of the new pop show changed all that, because it plugged directly into the centre of the latest scene and immediately transmitted the information to the entire teenage population of the British Isles all at once. Although Melly was an ardent admirer of all aspects of the show, which by his own admission he never missed if he could help it―in spite of being middle-aged at the time...he didn't quite realise then just how vital her presence was to its success! But he eventually came to the conclusion (upon reflection after the show's demise) that Cathy McGowan was RSG! In his final analysis, he stated that she was 'The bridge between Pop and its audience, that her clothes, and her jolie-laide sex-appeal, totally transformed the girls of Britain. She was the prototype dolly. She destroyed the class basis of fashion, gesture and speech. 'Smashin,' she said. (George Melly, Revolt into Style, p. 189).

CLAN CLOTHES FOR YOU!


Barbara Hulanicki's designs are really crisp! But Cilla and I agree, she's a problem. Why? Because she's so good we'd like to keep her to ourselves - our "secret" dressmaker. On the other hand, she deserves to be wider known. We just have to tell people about her. Like Cilla, I introduced Barbara to Elkie Brooks at the Ad Lib. It was just before Elkie was to go to New York with The Animals. She wasn't happy with her clothes and Barbara promised to design some specially for the trip. They were so super I asked her if I could show them to Rave readers. And here they are! Elkie's wearing them. Barbara is Britain's top fashion artist, so I was delighted when she agreed to do the sketches herself. Designing such great clothes is a fairly new development for her. Now she's taken the plunge, gone into manufacturing and opened her own little boutique in Kensington. Barbara is making copies of Elkie's clothes, so now you can wear them, too. And they're ridiculously cheap now they're in production. 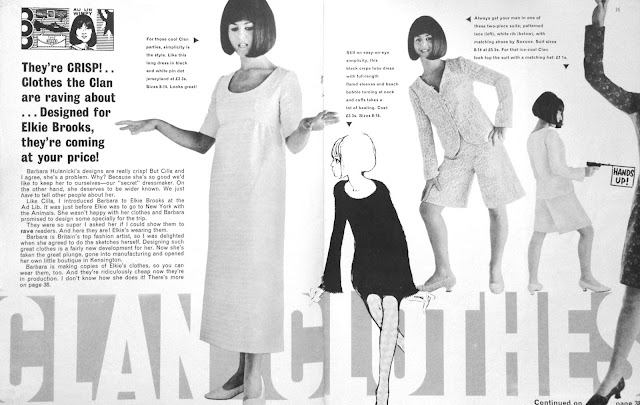 Left: For those cool Clan parties, simplicity is the style. Like this long dress in black and white pin dot jerseyland at £3 3s. Sizes 8-14. Looks great!  Centre: Still on easy-on-eye simplicity, this black crepe tube dress with full-length flared sleeves and beach bobble turning at neck and cuffs takes a lot of beating. Cost: £3 3s. Sizes 8-16. Right: Always get your man in one of these two-piece suits; patterned lace or white rib (far right), with matching shoes by Saxone. Suit sizes 8-14 at £5 5s. For that ice-cool Clan look top the suit off with a matching hat: £1 1s. 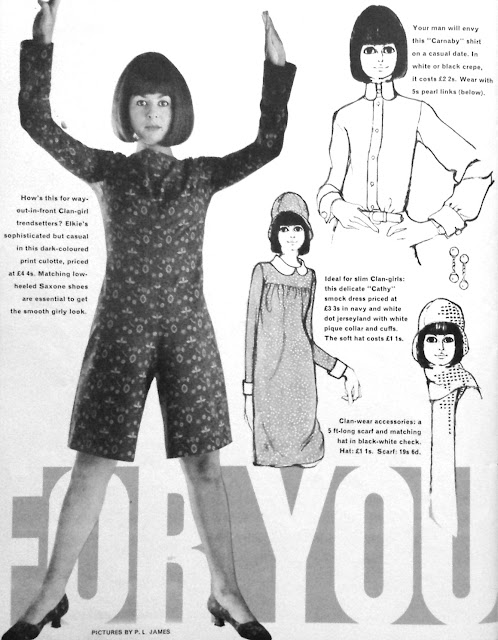 Left: How's this for way-out-in-front Clan-girl trendsetters? Elkie's sophisticated but casual in this dark-coloured print culotte, priced at £4 4s. Matching low-heeled Saxone shoes are essential to get the smooth girly look.

PHOTO CREDITS & LINKS
All images & original text scanned by Sweet Jane from the following publications, Rave and Hit Parade, issue No.10, November 1964, Ready Steady Go! book published by TV Publications Ltd. 1965 and From A to Biba by Barbara Hulanicki (1983). Rave photographs by P. L. James. All illustrations by Barbara Hulanicki. Further information about Woollands  21 Shop can be found in one of my previous posts here. And finally Generation X are in love with Cathy McGowan here.