Drop by George Harrison's place in Surrey and your eye is drawn to his fireplace, opulently decorated all over with highly-coloured painted scenes of lush reclining figures and drooping vegetation. The same fauna and flora bustle over John Lennon's piano and the guitars and drums of The Cream. The same style is apparent on the dream-like covers of the new LPs of The Hollies and The Incredible String Band. Should you wonder where The Procol Harem got their scarlet performing clothes or what Marianne Faithfull can have been wearing as she rushed through airport customs, the source is the same: The Fool. 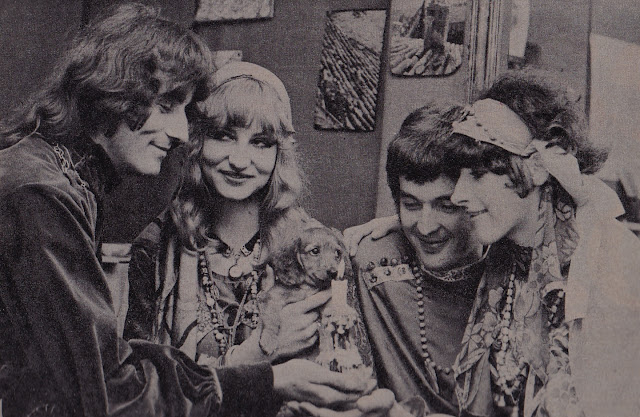 Since The Fool (they take their name from the joker in tarot cards) arrived in Britain a year ago from Holland via North Africa, they have found that the way they dress, paint, and the way they think have become an influential part of the pop scene. In the new year, for the first time, their clothes and paintings will be on sale to everyone. The four who are 'The Fool' live and work together behind a pretty midnight-blue door decorated with six-pointed yellow stars in Montagu Square. Simon Posthuma, at 28, is the eldest: tall, Van Dyck featured, with long, black, curling cavalier hair. He is painter and mentor to the group. Marijke Koger, 23, with long blond hair, was a commercial artist in Amsterdam and she now designs posters and clothes along with Josie Leeger, 24, who formely marketed her own fashions in Holland. The only British member, Barry Finch, 24, met the others when he was working in publicity for the Saville Theatre and got them to do a poster for a pop concert. Impressed with their exotic talents, he found it easy to settle down as their full-time organiser, promoting their ideas of hippy 'love' along with them. 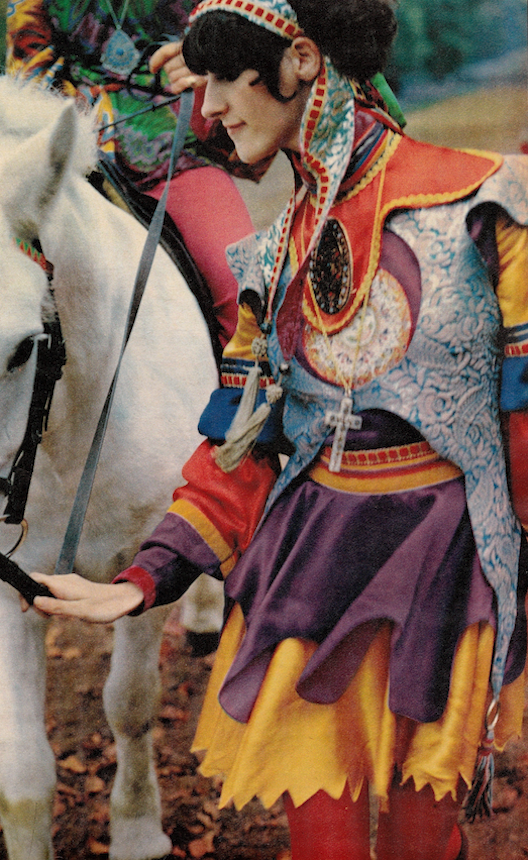 Tall and curly haired, Josie Leeger wears clothes of her own design which always pile layer upon layer of exotically shaped garments upon one another, each in a sumptuous material. The Fool group love to buy many of their fabrics from Liberty's furnishing department.


Visit them any day of the week, even on a Monday morning, and they open the door caparisoned in splendour. In the living room, hung with fringed shawls, their own paintings, and musical instruments and heavy with the scent of joss sticks― Barry is wearing a blue silk trouser suit, rajah-collared, with bright silk collages on the chest. Simon is in dark-red knee-high boots with patterned Turkish pants billowing over the tops. His blouse is full-sleeved, of patterned silk with a jewelled chain over it. Marijke wears a blue-patterned headscarf held on by a narrow shaped cap that has a Hans Anderson flavour. Over her flared, red and orange mini-skirt she wears a multi-coloured blouse; over the blouse a green brocade jerkin; and over the jerkin a silk coat with long wide sleeves. Josie with short, dark, curly hair has on red tights and sandals, a different red mini-skirt with a gypsy flavour. Over her indian silk blouse a patterned bodice and over that an embroidered neckband and collar. It's like a non-stop production of 'Scheherezade'. 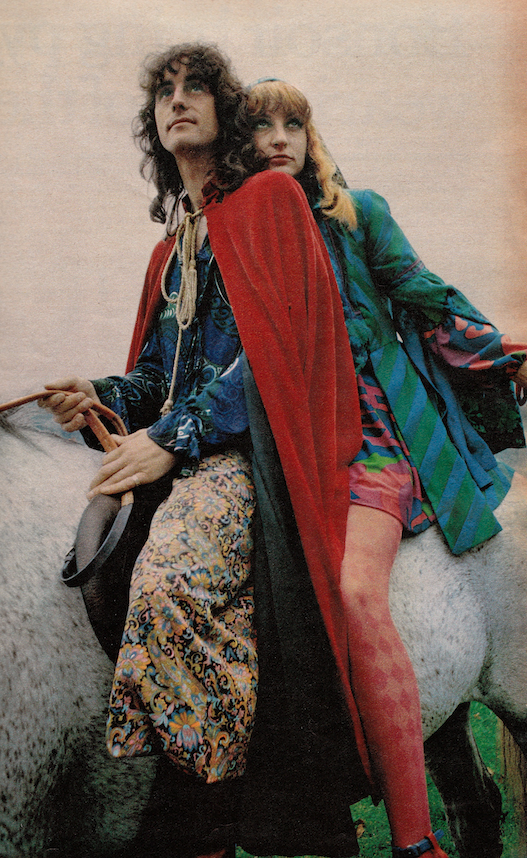 Simon and Marijke appear to be figures from a fairy tale. With his cavalier locks Simon carries off the red velvet Turkish cape and brocade pants with ease. Marijke goes in for a delicate green and blue silk coat with wide flowing sleeves, Designs like their clothes will be on sale at their new boutique opening at 94 Baker Street, London W1, later this month.


So effectively do they wear these romantic clothes that in less than a year they have become cult figures on the London pop scene. The ultimate proof of this was when they were asked to appear in a forthcoming film, 'Wonderwall', as themselves. It was clothes like these that made the Beatles' wives envious when they met the Dutch group. These surely were the most beautiful people of all. The Fool group made a number of outfits for Cynthia Lennon and Pattie Harrison, so that by the time the Maharishi arrived on the scene the girls were already dressed for the part. Their clothes were such a success and so unlike anything else around in the summer that the Beatles decided to set up the Dutch group in a shop, financing it from their company called 'Apple' which has a moneyed finger in a number of pies. The shop open this month at 94 Baker Street, is wholly designed by the Fool. Simon says "It will have an image of nature, like a paradise with plants and animals painted on the walls. The floor will be imitation grass and the staircase like an Arab tent. In the windows will be seven figures representing the seven races of the world, black, white, yellow, red etc. There will be exotic lighting and we will make it more like a market than a boutique." It will sell their paintings as well, and the jewellery they are going to import from Morocco, children's clothes in the same style and birthday cards and posters. It will even sell small musical instruments. 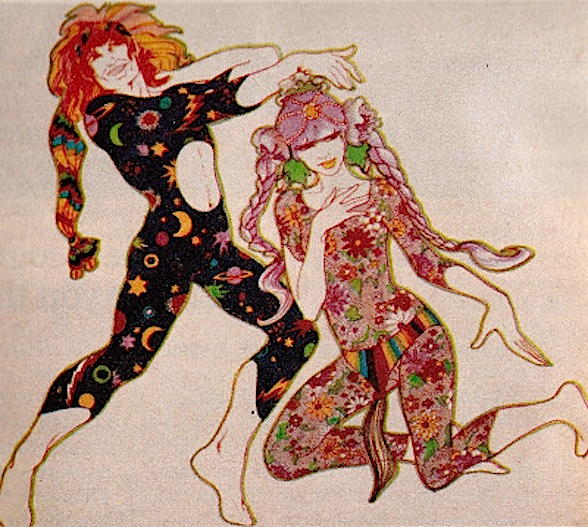 The Fool's costume for a forthcoming ballet, 'Adam and Eve'.

The clothes that Marijke and Josie have designed for the shop―they completed about 100 new outfits―are already in production. Some of the samples are an orange, embossed-velvet coat with long sleeves, narrow at the wrist but puffed above the elbow. It is aimed to sell at about 10 guineas. There are brocade trouser suits and heavy tapestry outdoor coats, mini-skirts with long skirts to add for evening at about 7 guineas. The Patterns are a little less riotous than the Fool wear themselves but, says Marijke, "It's a gradual evolution for the people who will wear our clothes as it was for us. We have been dressing like this for eight years but gradually we have added things. Boys and girls can't go to the offices dressed quite like we are. But we have made velvet suits for boys and dresses for girls that they could begin to wear everywhere. And gradually they will add extra things ― a pretty bodice on top of something they may already have ― and they will learn to be more creative. That's how it should be for them to do something too."


All four believe that bombarding their generation with exotic colours and clothes is a missionary work, and part of spreading their view of life. Says Simon in expressive if sometimes Dutch english, "When they used to open shops it was just after the bread of the people, not turning them on. We want to turn them on. Our ideas are based on love. If you're doing things for people you must be part of the people. Not set yourself up as something extraordinary." Barrie nods: ''You know the Co-op was originally a good idea. We want to plough back what we earn to give more entertainment to people ― even cheaper.  They believe fashion reflects the fact that the world is shrinking. Marijke says, "All the people of the earth are forced to come together now and this expresses itself in fashion. And to get people to do things for themselves is the final thing.'' Our ideas come from every country ― India, China, Russia, Turkey. And from the sixteenth century to the twenty-first centuries. There's a bit of everything.

Elements of many lands, many periods, mix in Marijke's designs.

Charming and high minded, they are vegetarians and tee-total. "We believe in reincarnation," Simon asserts. "It is the only logical idea. Once we thought about it we just knew that it was true. You are what you made yourself. And every race and nationality is joined. There is a general spirit of revival going on. And we should be governed by people who have regard for our spiritual life. In the future people will have more leisure and they will have to develop their inner eye. They will want to get to know the supreme power, love." Though their flat is scattered with books by Rudolf Steiner and a dutch medium, Josef Rudolf, the Fool feel the pull which the whole pop world is experiencing from the Orient, "a fund of spiritual strength", they say. Then they must have been among those who went to hear the Maharishi on his last visit to England? For a moment an expression of sinful pride, like that of a bourgeois who has bought a colour television, crosses their faces. "No," they say quietly. "We have our own swami." 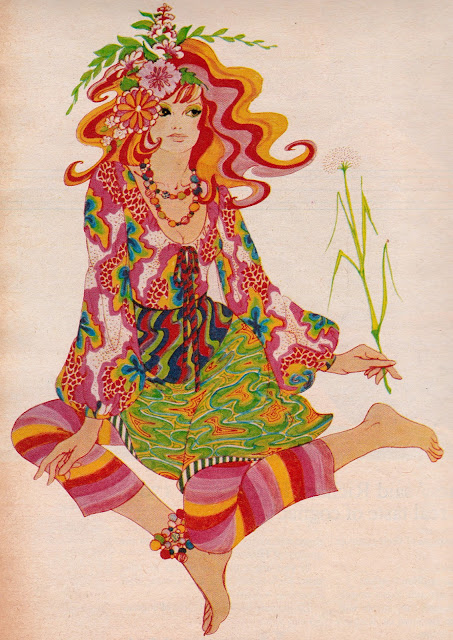 Fashion drawing by Marijke: like all her designs, it has a hothouse, flower child appeal.


IMAGE CREDIT & LINKS
All Images & photographs scanned by Sweet Jane from an original article by Maureen Green for The Observer, 3rd December 1967. All photographs by Ronald Traeger. View some more of my Fool Design Collective, Apple Boutique and Beatles Posts, and here, you'll find Felicity Green's report on the Hippie Fashion Scene in 1967. Discover more about the photographer Ronald Traeger. The Official website of the artist Marijke Koger-Dunham. A short film clip of Marijke & Simon of The Fool - Action Painting (1972). The 1968 film "Hot Millions" which provides one of the few rare filmed glimpses inside the Beatles owned and operated Apple Boutique.  'The Fool and the Radiating Spectrum' - a montage of film footage. The Fool Design Official Facebook page. The Fool's Yosha and Barry Finch on Reverbnation and also on Youtube.  An interview with Simon Posthuma. And finally, The Summer of Love with Marijke of The Fool - a recent documentary about the Artist Marijke Koger (artist for The Beatles, Cream, Procol Harum, The Aquarius Theater and more). It mainly focuses on the years 1967 - 68, but also includes her early career and subsequent creations.