Ossie Clark's Python Skin Jacket
According to Judith Watt's book Ossie Clark 1965/1974, Ossie first started using snakeskin in his collections sometime around late 1966 after he had discovered in a warehouse (possibly owned by Alma Leathers) several rolls of untouched Python and Watersnake skins, which had been stored there for the previous twenty years. He somehow managed to successfully hide his enthusiasm about the find from the vendor, and proceeded to purchase the skins for the bargain price of 30 bob a foot. The first outfit that he made from it was a suit modelled by Linda Keith in April 1967, shown as part of the Quorum A/W collection, but the jackets in particular became a much sought after item and still are to this day. Clients who were seen wearing them at the time included the models Veruschka and Twiggy, the actress Britt Ekland, as well as Marianne Faithfull, Anita Pallenberg, and Keith Richards. Although considering the popularity of these jackets, particularly amongst the Stones and their entourage, I have to say that I've found it difficult to find what I would consider to be any truly decent examples of either Marianne or Anita photographed wearing them, in spite of the fact that the Sweet Jane household is in possession of (at last count) approximately 26 books on the Rolling Stones! But of all the various snakeskin jackets that Ossie Clark designed, the jacket in the first picture below is without a doubt my personal favourite, it was photographed by Duffy for an Observer Magazine fashion editorial in March of 1968. I'm not lucky enough to own an original as of yet, but this particular design has been the idealised template for almost every other vintage leather jacket that I have ever worn or made for myself. I just love the cut, and its slim-fit, centre zipper, the banded waist detail with over-lapped front, and snap closure. I have also included some examples of Ossie's Watersnake skin jackets in this post, as well as a  documentary about the photographer Brian Duffy, which is titled 'Duffy: The Man who Shot the Sixties', plus a link to his archive. 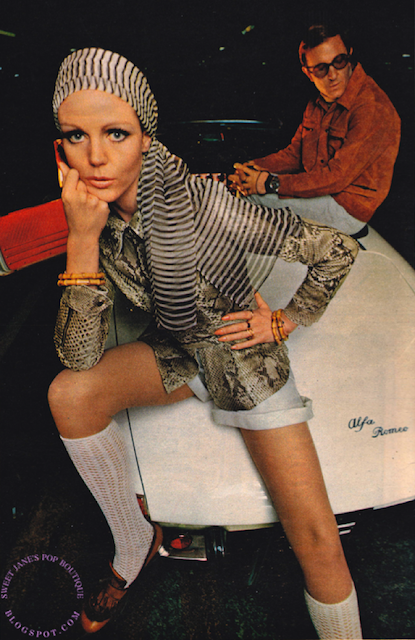 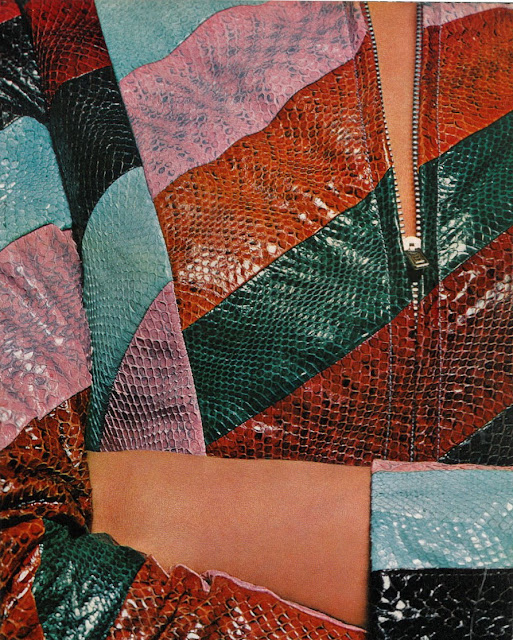 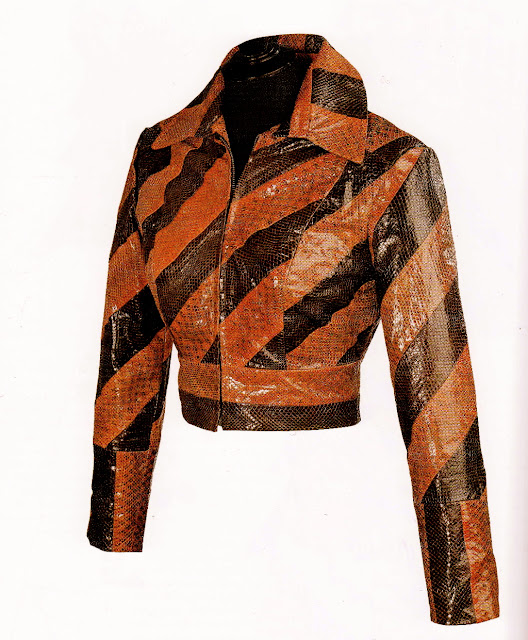 Duffy: The Man Who Shot The Sixties

Duffy - The Man Who Shot The Sixties from Duffy Archive on Vimeo. 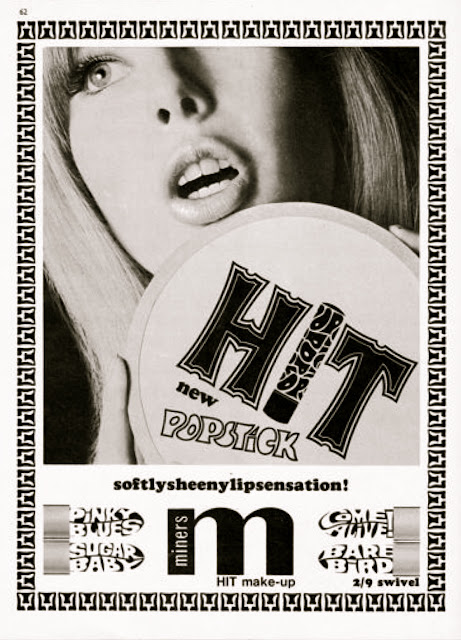 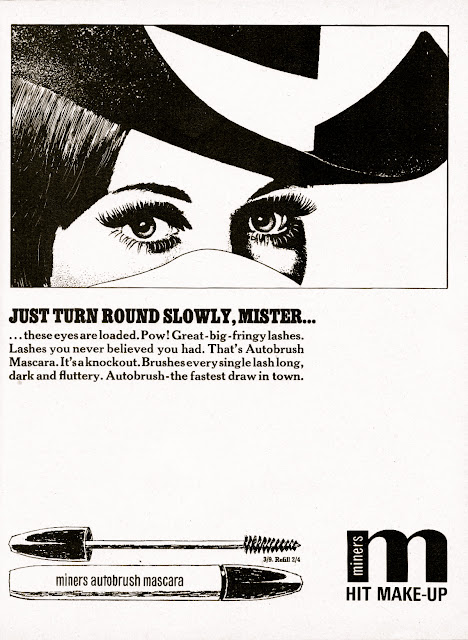 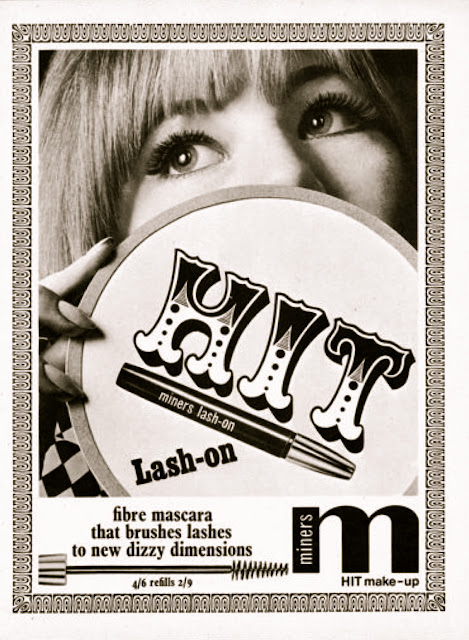 I've always admired these images of Ian Grey, the manager of Gear Boutique in Carnaby Street, with his wife Ann. The couple are photographed wearing what appears to be a homage to the traditional garb of the Cockney 'Pearly Kings and Queens'―as Swinging London began to embrace all things quintessentially British. I don't have an exact reference date for the first picture, but the second was taken in 1966, and I have always thought of them as a before and after shot respectively. But apart from these two photos and some of Pete Townshend wearing a similar look, I haven't seen that many other examples of it, which leads me to believe that perhaps it could have been a contender for the pages of Mini-Trend (Yvonne's style bible from Smashing Time). But however fleeting it may have been, by 1967 the idea had definitely moved on from the traditional and eventually translated into some truly beautiful rock 'n' roll dandy finery befitting of the times. And even if no one else was brave enough to carry it off, Pete Townshend certainly wore it well on more than one occasion, as can be seen in the final photographs. There is also some amazing live footage of him wearing one of his most spectacular pearly jackets to full effect on stage at The Village Theatre in New York in the video that I've uploaded at the end of this post. 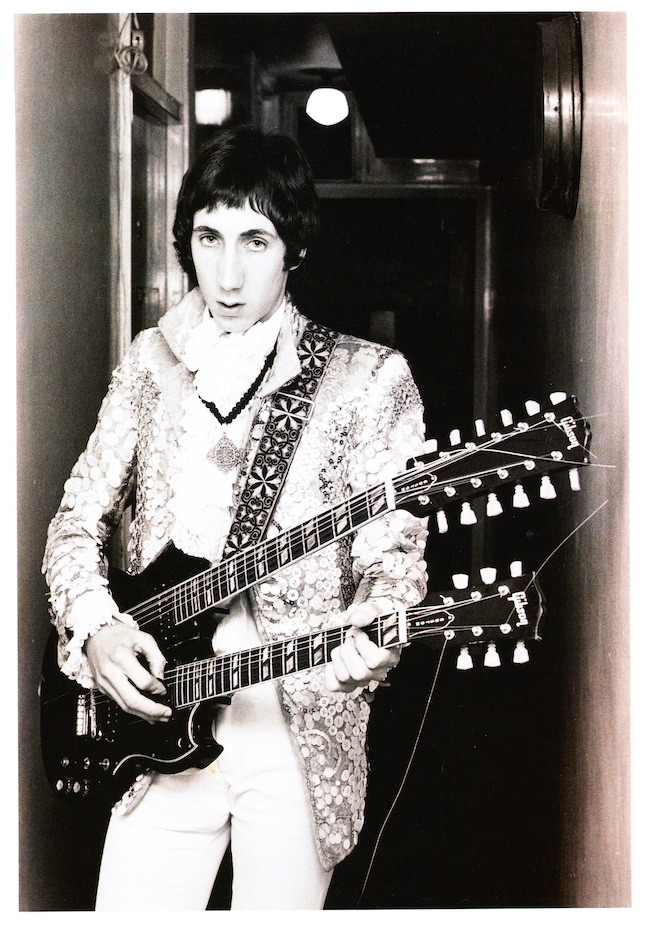 Pete Townshend backstage at The Saville Theatre London, 22nd October 1967, photographed by Chris Morphet. Chris documented The Who's career over a five year period, this is a quote from an interview with him in Q Magazine in 2004 about this particular picture―"I think it resembles an Italian oil portrait painting from a previous century. Pete looks so elegant, decorative and decadent. His wife Karen used to make a lot of his clothes, but I don't think she made this pearly king jacket. It was a shock when he went from wearing this regalia to a boiler suit and boots. But it was an indication that the group had moved on".

IMAGE CREDITS
Images scanned by Sweet Jane from Radical Rags Fashions of the Sixties by Joel Lobenthal. Swinging Sixties Fashion in London and beyond 1955-1970, V&A Publishing. The Who Maximum R&B by Richard Barnes. The Who Special Edition - The Inside Story, Untold, Unseen, Unhinged!- Q Magazine 2004, and Teenset Magazine, 1967.
Posted by SWEET JANE at 09:02 3 comments: 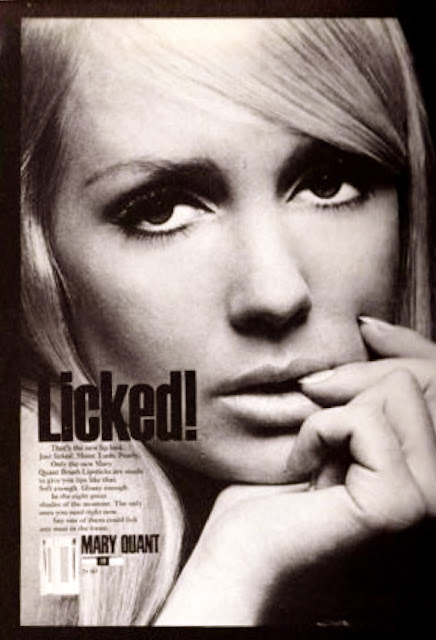 That's the new lip look, just licked. Moist, Lush, Pearly. Only the new Mary Quant Brush Lipsticks are made to give you lips like that. Soft enough. Glossy enough. In eight great shades of the moment. The only ones you need right now. Any one of them could lick any man in the room.


IMAGE CREDIT
Image scanned  by Sweet Jane from Fashion in The Sixties by Barbara Bernard.
Posted by SWEET JANE at 18:01 No comments:

There are currently three copies of From A to Biba by Barbara Hulanicki in the Sweet Jane household, two purple paperbacks and one beautiful hardback edition, because I can never resist picking up another copy whenever I see one in a book shop.  Each of them have been read cover to cover many times, but this past year or so, I've been thinking a lot about chapter seven...and page 120 in particular, which takes the reader up to the year 1970. At this point in time Barbara and her husband Fitz had begun to successfully launch the Biba Cosmetics range abroad, but they had yet to conquer the United States. As Barbara herself says "it's a very tough market to break into and you really have to wait for your opportunity"...and that opportunity eventually came knocking in the form of the influential Seventeen Magazine editor Rosemary McMurtney, who approached the couple while she was in London and had suggested that they should start to sell their clothes in America. She said that if they managed the distribution themselves, she would do a feature on them in the magazine―which had a circulation of several million copies per month. However, they didn't want to become just wholesalers as they felt it would be bad for their image, so instead they agreed that they would create a range of Biba designs exclusively for Seventeen, which would be available through the McCalls pattern catalogue along with some specially designed Biba fabrics by Tootal stocked at Macy's department store. Another reason why this chapter has intrigued me for such a long time is particularly due to the fact that Barbara also mentions that the clothes were photographed by Sarah Moon, in a marvellous 1920s round tower in the Au Printemps store in Paris. So, after a lot of searching online, I finally found a copy of the Seventeen magazine issue last December, and bought it for myself as a Christmas present...and here it is, 41 years later, almost to the very day that it was first published―Biba's american debut. Happy 2012 everyone, hope it's a great one! 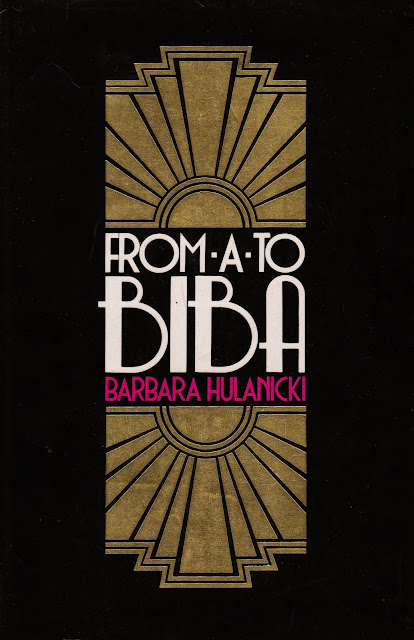 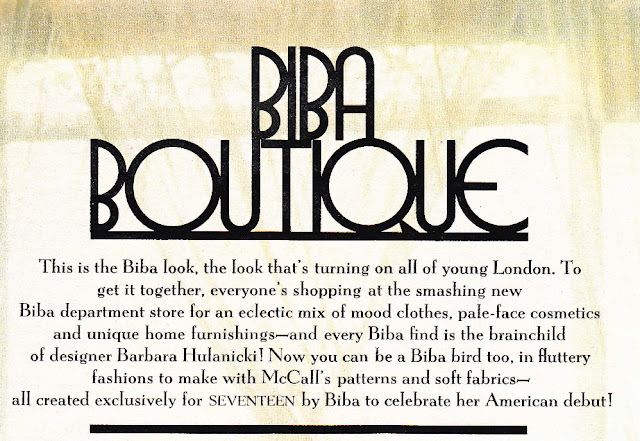 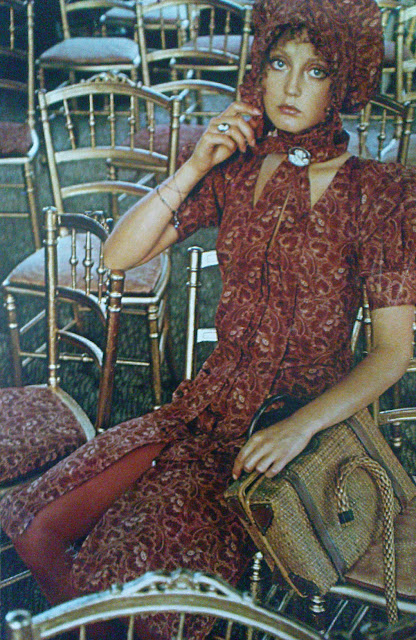 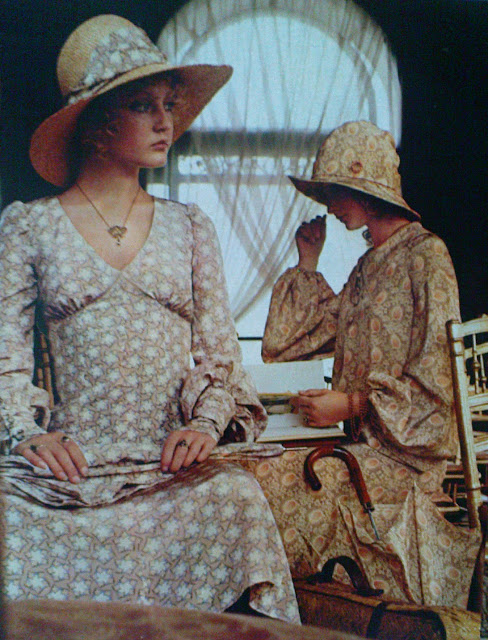 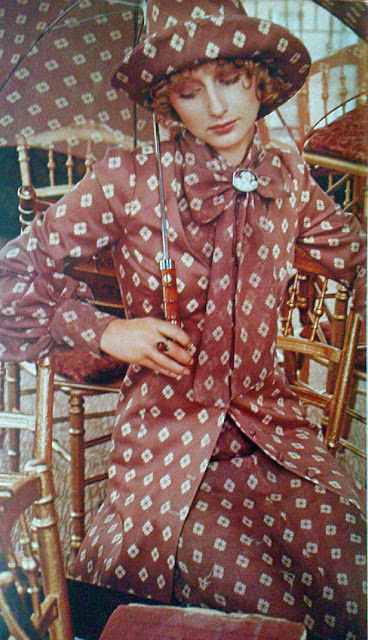 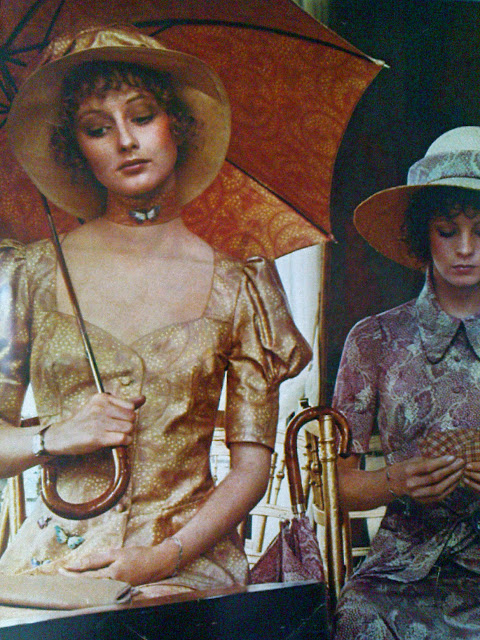 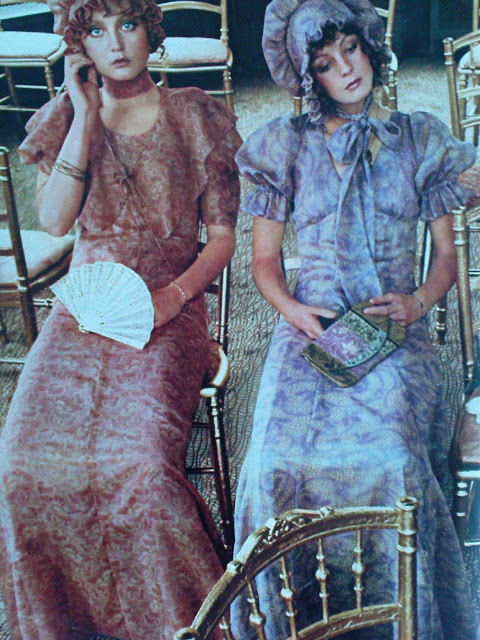 IMAGE CREDITS
All  Images scanned by Sweet Jane from the following publications: Book cover From A to Biba by Barbara Hulanicki. All fashion images from Seventeen Magazine, January 1971. All photographs by Sarah Moon.