The Psychedelic Poster Art of Michael English and Nigel Waymouth

The artists Michael English and Nigel Waymouth began working together as a design team shortly after they first met in late 1966, primarily to produce posters for UFO (pronounced Yoof-oh) an all-nighter club on the London underground scene founded by Joe Boyd and John 'Hoppy' Hopkins, which was located in the basement of an Irish dancehall known as 'The Blarney Club' at number 31 Tottenham Court Road. The new music venue first opened its doors to the public on the 23rd of December 1966, regular live acts included Pink Floyd and The Soft Machine, the light shows were psychedelic, the food available was macrobiotic, the films screened were of the Warhol/Kenneth Anger variety, and you could stay there from dusk 'til dawn―it was the ultimate night tripper! Up until this point in time, Michael had been working as a free-lance graphic artist within the counterculture scene but had also previously designed pop art logos for 'Gear' boutique in Carnaby street. And Nigel (along with his partners John Pearse and Sheila Cohen) was the proprietor of 'Granny Takes A Trip'—London's first psychedelic boutique which had opened just before Christmas in December 1965, where he was involved in designing some of the clothes and also the decor, and it wasn't long before the outlet at 488 King's Road had gained a reputation via its highly unusual and innovative facade.

The pair had been aware of each other's work for some time, and hit it off immediately when they were eventually introduced. They initially called themselves Cosmic Colours, their first and only known collaboration using this name being a record promo poster for The Purple Gang's 'Granny Takes a Trip' single in 1967. They subsequently changed the name to Jacob And The Coloured Coat for their second collaboration (the 'Luv Me' film productions Ltd poster) before finally settling on the moniker of Hapshash And The Coloured Coat in March of 1967 for the rest of their working partnership, which although relatively short lived, proved to be very successful. The individual styles of the two artists complimented each other perfectly, and over an 18 month period they produced some of the most beautiful psychedelic posters of the '60s era. During their creative partnership they also recorded an LP backed by The Heavy Metal Kids (who went on to form Spooky Tooth). The album was produced by Guy Stevens, originally a well known DJ at the influential Scene Club in London, who later produced records for artists such as Mott The Hoople, Free and the Mighty Baby, but is probably best known for his production on The Clash's highly acclaimed 1979 London Calling.

A major retrospective exhibition of the sixties work of Nigel Waymouth takes place at The Idea Generation Gallery in London next month, you can expect to see artwork from Hapshash And The Coloured Coat, designs from Granny Takes A Trip, including the original sign which hung above the shop door declaring (in the words of Oscar Wilde) that 'One should either be a work of art or wear a work of art', as well as photographs and ephemera from Nigel's personal collection. The exhibition aptly titled 'Hapshash Takes A Trip' opens on the 9th of September and runs until the 2nd of October 2011. A tube ride or a walk away for all you lucky Londoners, a train or plane trip away for the rest of us, but for anyone interested in this particular era,  definitely not to be missed! 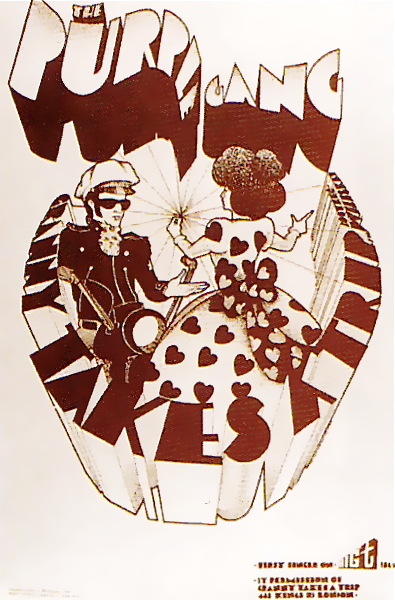 Record promo poster for Granny Takes a Trip by The Purple Gang. Designed and illustrated by Cosmic Colours (1967). 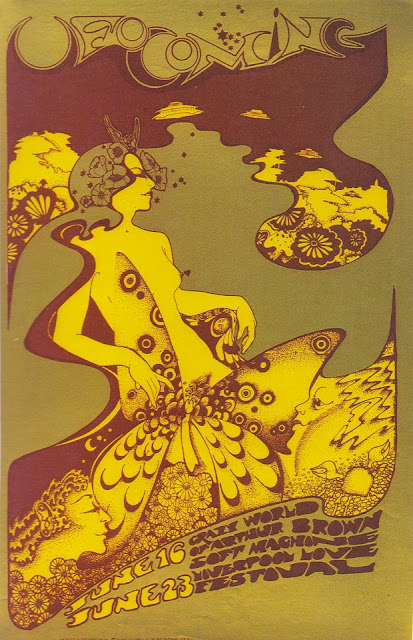 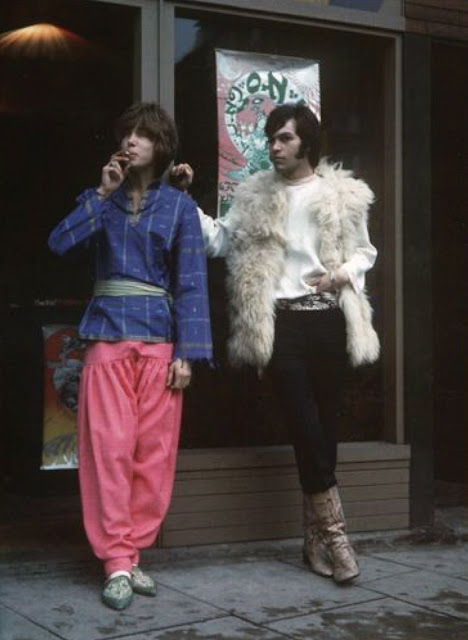 Outside the 'Hung On You' Boutique at 430 Kings Road, Summer 1967...there are very few photographs of the shop at this particular location when compared to the numerous images taken at the previous Cale St premises. But if you look behind these two fine exponents of hippie chic, you will notice that the two posters directly above this photograph are on display in the shop window. 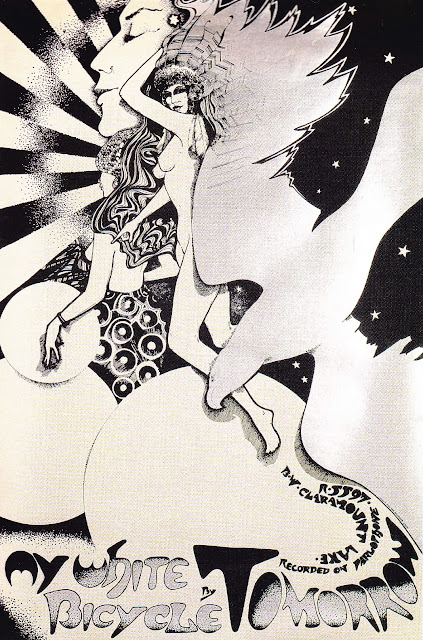 Tomorrow record promo poster for their single My White Bicycle, designed by Jacob And The Coloured Coat, 1967. This and the 'Luv Me' film production Ltd poster are perhaps the only known two which were designed while using this moniker. I have seen the image of the poster for My White Bicycle credited to Hapshash and the Coloured Coat on numerous occasions, however, if you look at the close-up detail in the scan below (taken from High Art, A History of the Psychedelic Poster by Ted Owen and Denise Dickson) you will see that it is clearly signed Jacob and The Coloured Coat. 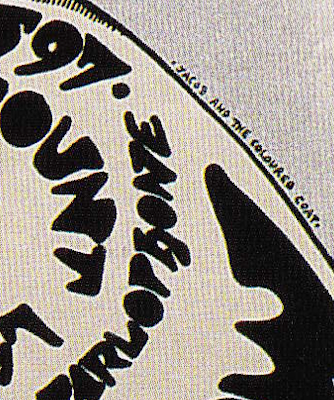 Tomorrow record promo poster for their single My White Bicycle, designed by Jacob And The Coloured Coat (1967). 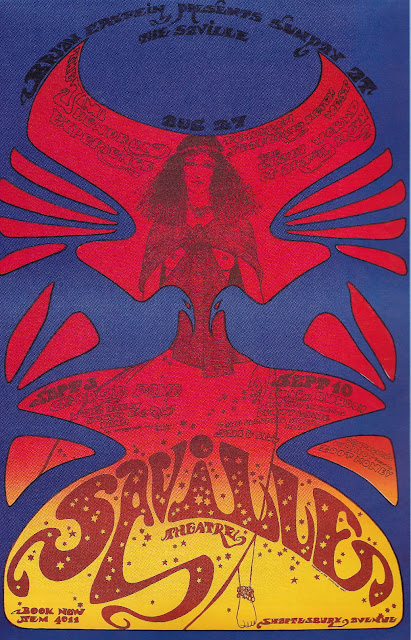 One of a series of Saville Theatre posters, commissioned by Brian Epstein to promote upcoming gigs by The Jimi Hendrix Experience, Tomorrow, The Crazy World Of Arthur Brown, Georgie Fame and Eric Burdon etc, designed by Hapshash And The Coloured Coat, 1967.


IMAGE CREDITS
All images scanned by Sweet Jane from: High Art A History Of The Psychedelic Poster by Ted Owen & Denise Dickson. 1966 And All That - Design And The Consumer in Britain 1960-1969 by Jennifer Harris, Sarah Hyde & Greg Smith. Boutique London a History: King's Road to Carnaby Street by Richard Lester, and It Was Twenty Years Ago Today by Derek Taylor.
Posted by SWEET JANE at 06:12