Once upon a time there lived a Queen! Queen Magazine in the Sixties (Part 1)


Once upon a time there lived a Queen!

Queen Magazine
in the 1960s


I'm lucky enough to own a small collection of Queen Magazines dating from the mid to late 1960s. Some were a  little the worse for wear when I originally acquired them, and unfortunately after many years and more house moves than I care to remember..they're all looking a little bit more the worse for wear now! But..still beautiful, even if they are a somewhat ragged around the edges..so, before they disintegrate any further, I've finally found the time to scan and preserve them..I'm using the term scan 'loosely' because after much frustration I actually ended up having to photograph them, as my flatbed scanner wasn't quite large enough to capture the entire cover image without losing either half of the Q or half of the N..and on a couple of occasions a bit of both! Anyhow, my inner geek (which I now know resides just below the surface) wasn't entirely happy with the result! But finally.... after several hours, and several cups of tea, here they are, or should I say, here are some of them...a photographic tale of Queen Magazine in the sixties. (to be continued). 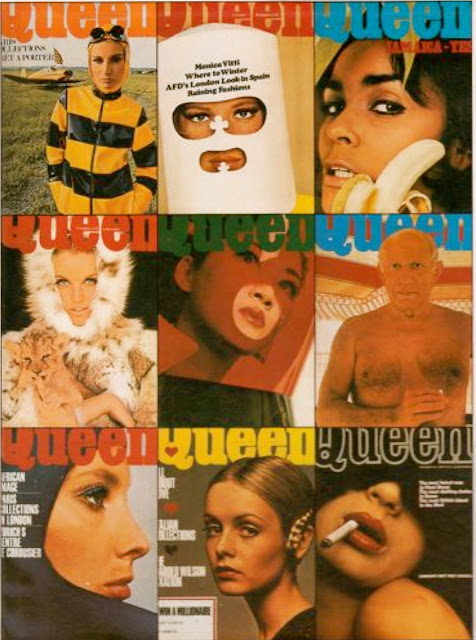 PHOTO CREDITS
All images scanned by Sweet Jane from my personal collection of Queen Magazines.
Posted by SWEET JANE at 07:15